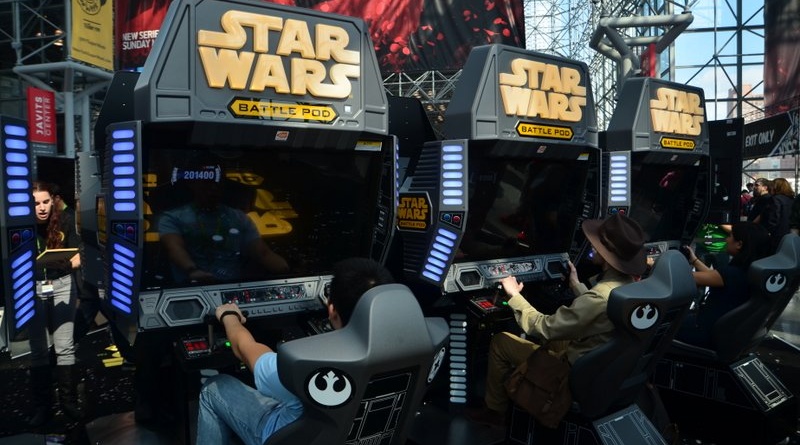 Throughout college and as often as I could track it down, my quarter-gobbling addiction was the Star Wars Trilogy Arcade Game.

For a Star Wars junkie, it was pretty much video game heaven — battling along the Death Star exterior, blasting Imperial Probe Droids and Wampas on Hoth and racing through Endor on speeder bikes, not to mention lightsaber boss battles against Darth Vader and Boba Fett.

It’s the one major luxury I always swore to myself I’d get if I got filthy rich … until today. That’s because the Flat Screen Edition of Star Wars Battle Pod has completely changed my (gamer) world.

Seriously, the second thing I do after winning the lottery, finding a spare $10 million in a bag on the street is plunking down the $35,000 and getting this bad boy.

Yes, I said $35,000, but if you’re into Star Wars or immersive video game experiences, once you sit into the Battle Pod and start playing, you’ll have a hard time looking at another Star Wars game in the same way.

It’s more than the laser sharp graphics and surround sound. The game truly makes you feel like you’re dodging ion cannon blasts, going after AT-ATs or even taking down Rebel fighters as Darth Vader.

If you’ve already got your ticket at the New York Comic Con, it’s worth waiting in line to give it a whirl.

While you’re waiting to cash in on that megamillions lotto ticket, you can play Star Wars Battle Pods at an arcade near you.