After the methodical, slow-burn pace of its spin-off, “Fear the Walking Dead,” the season premiere of “The Walking Dead” felt like a dangerous, unpredictable runaway train crammed with walkers making for one helluva ride.

Despite significant issues of working out the kinks with questionable character decisions, “Fear the Walking Dead” was a satisfying companion piece. At the very least, it was an effective stopgap/preliminary until the return of the main event. And did it ever deliver.

Certainly “FWD” had the unexpected benefit of making fans appreciate Rick, Daryl and company’s action-packed exploits that much more. Anyone else feel their jaw drop at the sight of that valley full of walkers? And then doubly so when you realized Rick’s plan involved maneuvering them somewhere else?

I’m a huge fan whenever the showrunners play around with the traditional series storytelling format and experiment a bit. 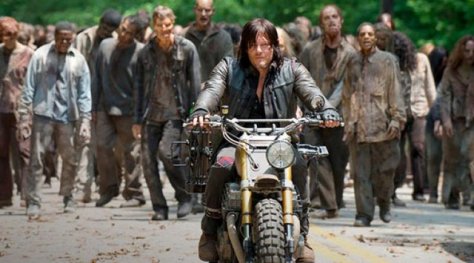 The episode immediately demanded our attention as Rick rallied members of his group and the citizens of Alexandria as he stood at the edge of a cliff overlooking the walkers.

Was Rick siccing the walkers on the mysterious Wolves that nearly killed Daryl last season? Series favorites Carl, Carol and Maggie weren’t around — had they been killed? How long has it been since Alexandria “president” Deanna’s husband got killed? Who are all these new faces getting close-ups to indicate they’re significant characters? And how the heck does Rick think a plan to herd a walker horde could possibly succeed?

So many questions, most of which thankfully were answered by episode’s end before setting up an even bigger question. More on that later.

The flashbacks were presented in black in white, a terrific nod to the non-colorized comic book. Not that I’d necessarily need that every week, but unlike a lot of shows, this is a series that could actually work just fine without color. 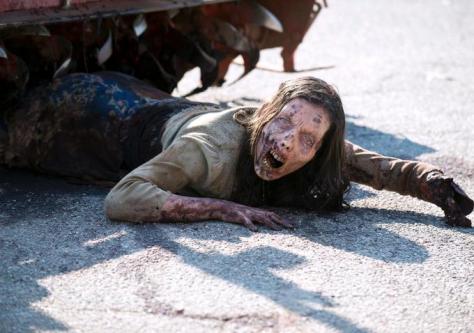 After Morgan’s surprising arrival at Alexandria — seeing Rick kill Pete — he’s got to spend a little time getting debriefed. Being Rick’s first ally post-walker onslaught helps speed up his indoctrination though and he joins Rick in ditching Pete’s body outside Alexandria’s border. Deanna agrees with Rick that murderers don’t deserve to be buried within city limits.

I didn’t think much of Deanna last season. She seemed too naive and utterly clueless to the new real world, but just in this one episode, the embattled leader who’s already lost her husband and son since Rick’s arrival finally seems capable of surviving even beyond Alexandria’s limits.

Tovah Feldshuh had already been a great addition to the cast, but I’m immensely more fascinated in where she’ll be taking Deanna throughout this season. Feldshuh conveyed so much from her silence and short responses that Deanna could become a season favorite this year. 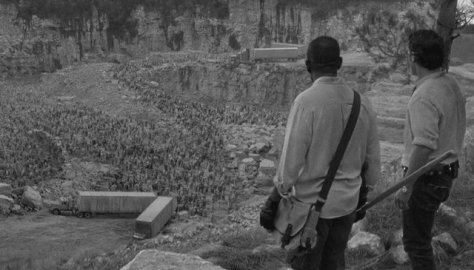 I suspect Morgan is going to be the new Dale/Herschel, who questions and challenges Rick not to completely forsake his morals even in this crazy, mixed-up walker world. Morgan seems less sanctimonious than the former and more capable in a fight than the latter. Morgan instantly proves more savvy than the Alexandria residents as he quickly sees through Carol’s happy homemaker facade and tells her he knows she’s capable of handling herself.

While debating as to whether they need to bury Pete’s body, they find the walker valley. It’s an intimidating sight, but Rick knows the makeshift tractor trailers blockade won’t last much longer.

From there, Rick returns with a plan to move the herd away from Alexandria’s border. I appreciated Carter questioning the plan and outright considering assassinating Rick to restore order to the city. That’s the kind of dissent we haven’t seen in Rick’s camp and from an outsider’s perspective, things all went downhill the moment Rick and company arrived.

Rick admits later to Morgan he wanted to kill Carter after barging in on his planned coup détat as it’d be easy, but he realized Carter is the kind of person here who’s just going to get killed anyway.

Rick has somehow managed to grow colder now to the point he’s not even worried about low-level potential threats such as the. And sure enough, during the herding, Carter’s lack of awareness costs him as a walker grabs him and takes a bite out of his face. Maybe he survives the bite somehow, but his screaming puts the plan in serious jeopardy so Rick finishes him off. Rick’s been worried about the citizens’ lack of experience with walkers and already it’s come back to bite them.

Even in the midst of the chaos with the walker herd, the episode still manages to find some lighter moments with Eugene the gatekeeper’s introduction to Heath (“Straight Outta Compton’s” Corey Hawkins) and other Alexandria citizens returning from an earlier mission. Eugene respects Heath’s hair game if for no other reason than Eugene doesn’t have the worst hair title locked up to himself now. 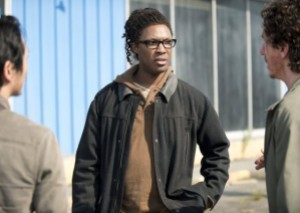 After losing Tyrese, Bob and Noah last year, I was glad to see a new black male character introduced into the fold. Walker hi-jinks aside, the series has always been one of the best on TV in terms of having a diverse cast.

Among the other potential interesting subplots this season is Nicholas attempting to redeem himself after Glenn spared his life. Does Abraham have a death wish? When the still unhinged Sasha is worried someone wants to die, they’ve got some issues.

The only aspect of this episode that didn’t quite work was Rick’s conversation with Pete’s widow, Jessie, over Rick’s insistence that her son, Ron, learn how to protect himself.  The interactions with Jessie are the few moments Rick appears vulnerable. Sure, he’s still human and has needs, but Jessie probably isn’t the best candidate for potential girlfriends.

Just when it appears Rick’s crazy plan will work, a loud horn starts going off immediately undoing all of the Grimes Gang’s hard work with flares and gunshots to lead the herd away. Worst news for Rick and company? The horns are coming from Alexandria sending the herd on a collision course with their home base.

The show has never been a slow-starter, but this was one of the series’ best season premieres. The excellent use of flashbacks, tension-filled walker encounters, character interplay and intriguing new storylines lay the foundation for what could be one of the best Walking Dead seasons yet.