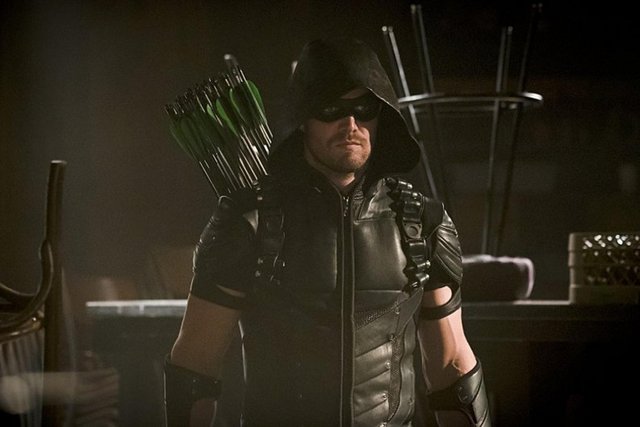 Watch any show long enough and you can see the characters begin the inevitable march towards maturity. They get a steady career, get married and eventually have kids and somehow those characters you’ve enjoyed watching their exploits for years become a bit boring.

If it weren’t for that major death hinted in last week’s episode I’d be concerned this season was going to be spent transforming our characters into respectable, mature adults and not the cool crimefighting squad that’s made Wednesdays so much fun.

One thing that hasn’t been aimless are the fight scenes even with three partners joining Green Arrow (that’s surprisingly going to take some time getting used to typing) on his missions. In the episode’s coolest moment, Black Canary leaps from a building and GA shoots an arrow she uses to swing down and take out some more bad guys.

What stood out this episode was Team (Green) Arrow is too big. Counting Felicity as support staff, the group is a five-person squad. GA is a regular highly-trained guy and when he’s not using his bow and arrows, there’s essentially no difference between him, Diggle, Black Canary and Speedy.

The easiest fix may simply be that the team doesn’t need to be out for every mission so GA can still have his moments to shine.

This week, Oliver and Thea meet with Jessica Danforth  (Jeri Ryan), a longtime family friend who wants to make a difference in Star City by running for mayor. Mayoral life expectancy is dangerously short as the last three have been killed, but Jessica is determined to do what’s necessary to get Star City back on its feet.

Danforth quickly gets targeted by Damien Dahrk using hitman Lonnie Machin. Sticking with the borrowing Batman villain theme, Machin is Anarky, a misguided youth who took extreme measures to improve the quality of life in Gotham. With Star City in such constant disarray, using the comic book take probably would have made more sense instead of casting him as an unhinged mercenary.

After Machin kidnaps Danforth’s daughter, GA and Speedy pursue any lead to find him. Again, Thea is starting to show side effects from her dip in the Lazarus Pit and is overly aggressive in her interrogation techniques.  I like the Batman/Damien Wayne dynamic the show has set up with Oliver trying to keep his sister reined in and finding it increasingly more difficult.

Felicity kicks off her season story arc as she assumes control of Palmer Technologies. She’s immediately confronted by the board of directors who wants her to start laying off employees. Not that she needs to be emotionless at that prospect, but it’s way too soon in the season for tearful Felicity to make an appearance.

Office politics make for boring storylines in an escapist comic book action series. It  doesn’t get any more interesting with the arrival of hipster tech geek Curtis Holt who may be the show’s version of comic hero Mr. Terrific. Holt is essentially a gay, male version of Felicity and their awkward, stilted banter looks like it will grow tiresome pretty quickly.

Felicity bluffs that Holt’s got a major company revitalizing project in the works and needs all the employees slated for termination. Despite working in hard numbers, the board agrees to this vague proposal and gives her six months to pull it off. So why did the employees need to get fired right away if they really had a six month window?

Diggle confides in Laurel about Dahrk’s connection to The HIVE, the same group that killed his brother. Diggle not trusting Oliver made sense as they still have a lot of tension to work out, but I was glad to see that wouldn’t be a season long secret for him.

Capt. Lance’s storyline gets somewhat convoluted as he angrily confronts Dahrk about Danforth’s daughter’s kidnapping. Dahrk threatens to do harm to Lance’s daughter, but gives up Machin as he’s crossed the line. Supposedly Quentin was fine with Dahrk’s plan to kill Danforth? I want to know how this association started, but Lance being blackmailed when he’s got the city vigilantes on speed dial doesn’t make much sense at this point.

Lance passes on Machin’s location to Team Arrow and GA and Speedy go after him. Unlike most of the villains not named Merlyn, Slade or Ra’s, Machin actually manages to hold his own with the two siblings before Thea uses his electro staff to ignite him. GA extinguishes him with a helpful pipe of oxygen hanging overhead, but Machin flees police custody while being taken via ambulance to care for his wounds.

The encounters with Machin proves more than enough for Danforth, who announces she is withdrawing her candidacy. If only Oliver knew someone who could stand up for the city and not be worried about their safety…

Oliver’s decision to run for mayor is actually comic-inspired. I didn’t necessarily like it in the comics and in the show universe it makes less sense. Between Felicity and Oliver, this season could be packed with the wrong kind of intrigue.

Not a lot happened on the island flashback this week save Oliver infiltrating an armed unit that has people working in a field. Oh, and to really sell his commitment to the cause, he got a haircut. No more bad blonde wigs!

Laurel, completely intrigued on the prospect of resurrecting sisters, offers to take Thea for some relaxing spa time. How Oliver doesn’t consider Laurel is going to immediately book a reservation for the first Lazarus Pit seemed a stretch. Sure enough Laurel tells Thea they’re going to Nanda Parbat in part to help Thea come down off her homicidal tendencies, but really to resurrect her sister Sara.

This is really one of those cases where DC TV got ahead of itself with the reveal that Sara was going to return and be part of the “DC’s Legends of Tomorrow” team. The big shock factor was absent from what should have been an incredible moment on “Arrow,” not used as a tease for another show.

I did appreciate seeing Sara’s dried-out corpse. She wasn’t magically preserved, but dead dead. Seeing all the grief Thea is confronting, are we sure Laurel’s not the crazy one?

Oliver and Felicity grow up and decide to take on more responsibility while Laurel watches Thea lose her mind and wants Sara to get the same treatment. Of Team Arrow, only Diggle is acting like a fully committed vigilante while Lance’s subplot gets progressively more convoluted.