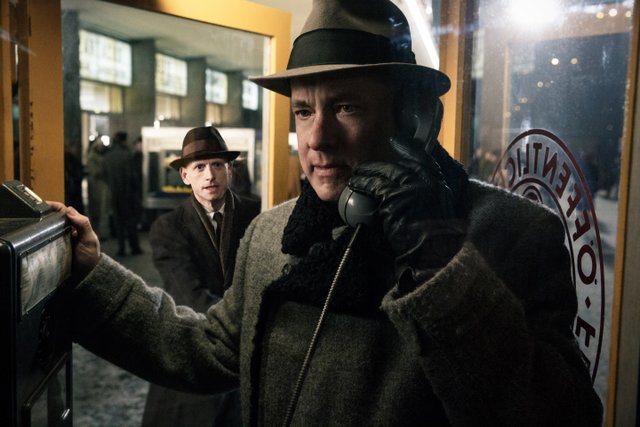 After creating arguably the definitive World War II film with “Saving Private Ryan,” Tom Hanks and Steve Spielberg do it again with the outstanding “Bridge of Spies.”

Whenever Spielberg and Hanks are involved, it’s guaranteed award bait even if it’s based more on reputation than merit. With “Spies” though, you can pretty much start penciling in a slew of well-deserved Oscar nominations right away.

“Spies” certainly resembles the spirit of conviction, sacrifice and optimism that embodies a strong Oscar contender and its star and director’s vision raise it to the level of one of 2015’s best films.

Based on actual events, the film details how insurance attorney James Donovan (Tom Hanks, “Saving Mr. Banks“) became a key negotiator in securing the release of captive Americans at the onset of the Cold War.

Initially, Donovan is all but forced to represent Russian spy Rudolf Abel (Mark Rylance), drawing the wrath of his countrymen who don’t understand the politics of making the effort to give any alleged criminal a fair trial.

Rylance puts in a strong bid for Best Supporting Actor consideration. He never fully allows us in to Abel’s mindset and if we can take him at face value. After all, he’s a spy and early on, we see he hasn’t forgotten his training despite his disarming demeanor.

Soon, Donovan develops a growing respect for the composed Abel and wants to uphold the legal system he’s so staunchly defended. On its own, that’d be a decent film, but “Spies” evolves into a more complex film. We see the other side of the conflict through the experiences of Francis Gary Powell (Austin Stowell, “Whiplash“), an American pilot shot down during a surveillance mission in Russia.

Spielberg (“Lincoln“) masterfully shows the stark contrast between the two sides and further illustrates that when Donovan is called to act as an off the books negotiator in a prisoner exchange — Abel for Powell — in Germany.

The script, handled by Matt Charman and revised by Joel and Ethan Coen, is terrific and is packed up with just the right amount of thrills, political posturing and well-timed humor.

The world of espionage and hostage negotiations is foreign territory to Donovan especially as he finds himself having a front row seat to the bombed out and depleted Germany as The Berlin Wall is constructed.

Spielberg doesn’t get too fancy with the special effects and lets the bleak grey buildings frosted with snow convey the sense of depression and uncertainty as Russia asserts its control.

Further complicating matters for Donovan is a young American student Frederic Pryor (Will Rogers) who is imprisoned by the Germans on trumped up espionage charges. Despite orders to the contrary, Donovan takes it upon himself to attempt to secure Pryor’s release even at the possible risk to the entire mission.

Hanks makes acting seem so effortless, it’s easy to take for granted his performance. Hanks doesn’t go for the showy award-reel highlight clip moments, keeping Donovan more grounded and relatable. Donovan’s not infallible and he definitely doesn’t know anything about the spy game, he’s just a regular guy trying to do the right thing.

It makes scenes where Donovan meets with the Russian and German negotiators especially tense. Spielberg gets his creative mojo working double time in these segments setting up some interesting perspectives to ramp up the intensity.

Thomas Newton’s score is likewise low-key, but a strong accompaniment to the events.

While it likely would have bogged the film’s momentum down, I would have liked to have seen a bit more of Donovan’s home life as his wife (Amy Ryan) and children are blissfully unaware of his actions. That’s largely due to Ryan being so enjoyable in her far too limited amount of screen time.

Another quibble is the occasional dialogue in German and Russian without subtitles that goes on too long for those not fluent. The intention is there, but it’s an odd omission. But those minor issues hardly derail the intrigue of a spy movie devoid of gadgets beyond daring, wit and resolve.

Although it loves its spy movies, Hollywood has largely ignored the Cold War. This year we’ve already gotten Guy Ritchie’s stylish “Man From U.N.C.L.E.,” but for a deeper experience that will stay with you much longer, you can’t beat Hanks and Spielberg.  Is it too early to consider what they could do with the Vietnam War?