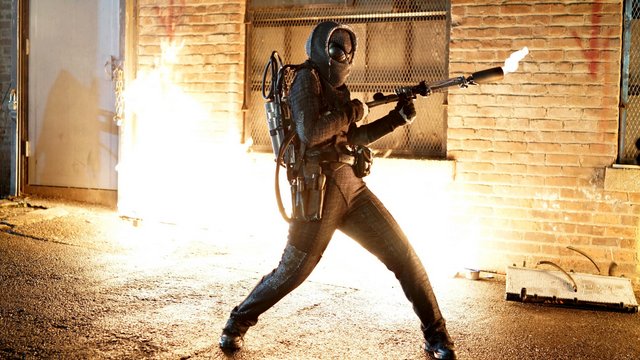 Scarification was Gotham at its best and its worst in jumbled frustrating enjoyable mess.

Let’s start off with the great and work our way down. Theo Galavan and sister Tabitha had Penguin kidnap Bunderslaw, the shady high ranking Wayne Tech employee Selina and Bruce tracked down last season.

Theo then sets in motion a complicated plan to have Penguin retrieve a knife. Penguin learns the origin of the knife dates back to Gotham’s early days when it was used to sever the hand of a young man caught with a Wayne ancestor. The Waynes had the man’s family essentially wiped from Gotham and they reestablished themselves as the Galavans.[irp]

So there we have it. Theo and Tabitha’s end-game is to get revenge for their ancestors by killing Bruce Wayne and destroying the Wayne Empire. And since Bruce can’t possibly defend his family at this stage, we’ll need Jim Gordon, Harvey Bullock and the other present day Gotham heroes to aid him.

I’m a huge fan of this direction even if the journey getting there will be a little bumpy.

While the previous seasonlong buildup was frustrating, I’ve happily come around on Nygma and Kringle now that they’re actually an item. The writers have dialed back his quirkiness and as a result, he’s been one of the more enjoyable characters this season. Oddly enough, I was bummed we didn’t get more of the Kringle/Nygma/Lee/Gordon double date.

One of the biggest annoyances this season has been how Theo is pulling this long con on everyone in Gotham as he slowly makes his way to the mayoral seat. It’s one of those cases where the viewers are so far ahead of the other characters and know Theo is the villain pulling all the strings while they remain clueless.

Perhaps more frustrating, looking beyond Theo’s public persona seems right up Gordon’s wheelhouse after his experiences dealing with mob bosses and corrupt commissioners. Now he’s been dumbed down to further sell Theo’s ascension as the episode ends with Gordon agreeing to endorse his candidacy.

The showrunners continue the pesky trend of forcing Selina into major subplots. This time she coincidentally happened to be close with the Pikes, the arsonists Penguin needed to torch the Wayne properties as she was pals with their half-sister Bridgit.

Again, the writers use a cheat by making Bridgit Firefly version 1.0 after she’s recruited to join her brothers on the arson runs complete with fireproof suit. My biggest issue is all of Batman’s Rogues will be copycats of earlier criminals Jim Gordon faced.

I get the writers want to sell Penguin isn’t thinking clearly with his mother held hostage by the Galavans, but I really hated his ridiculous way to have Butch get in with them by chopping his hand off. The show has long crossed the shock value threshold so no act of violence is surprising anymore. Plus, as far as plans go, how irrational is Penguin for chopping off the right hand of his right-hand man?

At the rate this season’s going the “Gotham” dismemberment and body count may top “The Walking Dead” and “Game of Thrones” combined.

I was torn which death was the worst between the Pike brother getting obliterated after the explosive he had in his pants got struck by a bullet, Bunderslaw getting his eye carved out or the two dismembered hands. Either way, “Gotham” needs to get a handle on it as the tone is maddeningly inconsistent when one scene has some losing their eye and the next characters are joking about fondues and double dates.

The show typically has a good week and bad week, but this one was unusual as we had a fight between both in this installment. For the long term direction of the season, the good outweighed the bad, but toning down the gory violence and creating original villains for Gordon like The Ogre would for consistently entertaining viewing.