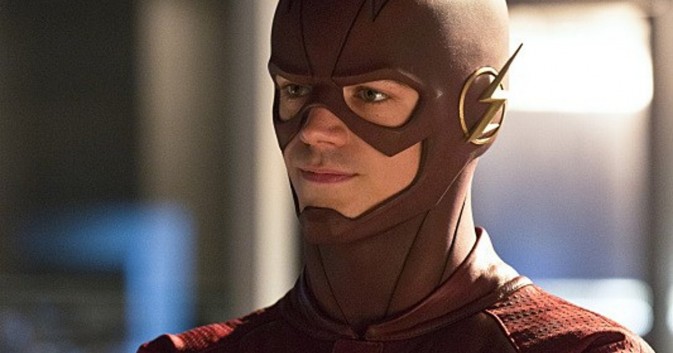 To be honest, the trailers for this week’s show didn’t have me all that excited. I figured the return of Captain Cold was going to be another  agenda episode to further pave the way for “DC’s Legends of Tomorrow.”

While we did lay more groundwork for CW’s superhero teamup series, “Family of Rogues” main focus was on the show’s hallmark — family — resulting in another outing that proves even when it’s not barreling at a runaway pace, “The Flash” is the best in the superhero TV biz.

Flash quickly discovers it was Leonard and Lisa’s father, Lewis Snart (Michael Ironside), who’s blackmailed Leonard to help him steal some diamonds under threat of an explosive device in Lisa’s head going off.

One of my all-time favorite comics was the fleshed out Captain Cold origin written by Geoff Johns, which details the horrific treatment the Snart siblings endured at the hands of their father that set them down the road to super-villainy. Check it out here from site partner Amazon.com — Flash, The: Rogues (Flash (DC Comics))

My only gripe with Ironside’s casting is it takes him out of the running for a more important role later because if anyone should be a recurring villain in the DC TV universe it’s Michael Ironside.

The seeds were definitely planted for Captain Cold to at least briefly align with the side of the angels in “Legends” as he wasn’t fond of his Lewis’ plan B of killing the armed guards.

While Cisco works on removing the bomb, Barry tries to keep Lewis occupied by joining the gang to break into the vault. Once Cisco removes the bomb, Flash tells Leonard the good news and he promptly celebrates by impaling Lewis with his freeze gun.

Being a respectable hero, Flash arrests Cold, but Barry visits him to both ensure Snart isn’t planning on revealing his identity and to encourage him that there is still good in him and he’ll have time to find it in prison.

Joe’s storyline focus this week dwelt on the return of his wife, Francine, whom he told Iris was dead so he could create a fabrication that she was an ideal mom and not the drug addict she was in reality.

I was thrilled Joe took Barry’s advice and told Iris the truth instead of letting that drag out for weeks. I was less enthused with how consistently Jesse L. Williams can get me so choked up during these personal emotional scenes. Fortunately, Iris understood Joe’s reasoning so we didn’t have to endure a half season of them not talking.

Side note: it was great to see Malese Jow’s Linda Park resurface if just for a quick cameo. Considering how brief her stint on the show had been, I’m wondering if it’d been better just to introduce her around the time Wally West arrives.

Jay was working overtime to access the STAR Labs portal he dubs the Speed Cannon (sadly no cosmic treadmill) to return to Earth 2. But after some weak convincing from Team Flash he agrees to help until they stop Zoom. That seemed goofy as Jay just might be able to restore his powers back on Earth 2 and far more effectively help Barry beat Zoom.

I’m also still not a fan of Caitlin’s crush on Jay as it feels like a disservice to have her storylines always tied to her pining over a guy. Cisco’s world doesn’t revolve around a woman and Caitlin’s doesn’t need to either.

Back to “Legends” for a moment as it directly ties into tonight’s cliffhanger. In establishing their unprecedented DC TV universe, executive producers Greg Berlanti and Marc Guggenheim need to be mindful that the future projects don’t impede the storytelling of the current shows.

After winding down from their busy adventure, Team Flash is all set to unwind when Stein gets another seizure-like spell, but this time he flares up as if trying to become Firestorm before switching to a blue flame. Next week’s trailer reveals we’ll be seeing the new partner Stein will team up with to become Firestorm and not so coincidentally, they’ll be on “Legends.”

While it’s a bit early to get concerned, I’m worried this season will be spent alternating between setting up “Legends” and the threat of Zoom.

In the post-credit sequence, the Speed Cannon sees someone from Earth 2 emerge — Harrison Wells. Why the Steve Jobs of Earth 2 would take an inter-dimensional field trip is a question for another episode.

Capt. Cold is always a welcome presence on the show and despite the “Legends” agenda, this was a fun episode that looked at the good and bad of fathers. Even with limited actual Flash action, this was yet another solid episode.