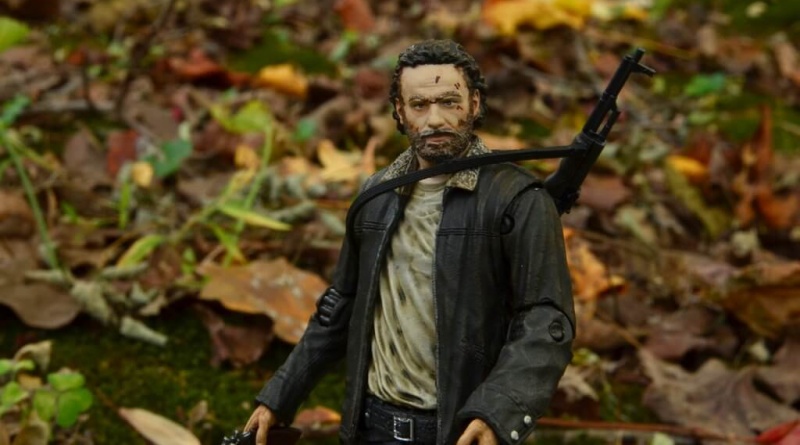 Despite being the main character on “The Walking Dead,” Rick Grimes has had a rough time getting a figure in McFarlane Toys’ line befitting his prominent status.

Finding a Series 6 or 7.5 figure Rick with a remotely decent head paint job proved impossible so I was ecstatic to see another Rick was included with Series 8. Was this the Rick Grimes my Walking Dead collection needed?

Packaging: MT doesn’t waste a lot of space with the packaging. We get the helpful indicator that this is another of the AMC collection and this series sports the image of Abraham’s letter to Rick featured so heavily in the Season 5 promotional campaign.

The back is less exciting with just a wide image of the figures and exclusives. I’m always a proponent of some sort of bio information and just a small blurb to say what’s included with the figure. The line hasn’t been victimized by swappers or thieves, but you wouldn’t necessarily know what’s supposed to be included from the package. 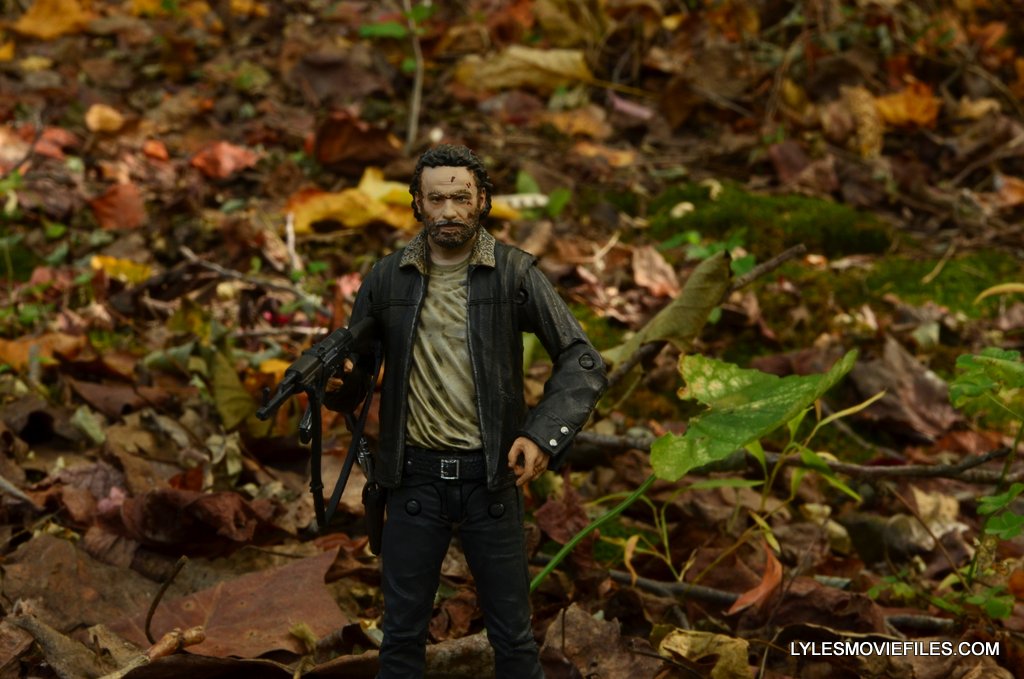 Likeness:  I prefer clean-shaven Rick, but this figure features our hero in full-on crazy man beard. The Series 6 headsculpt had a pretty strong likeness to actor Andrew Lincoln that got buried under a bad paint job. This version is much better despite some minor issues (more on that in a bit).

Hair can be a tricky aspect to nail down, especially when it’s somewhat curly like Rick’s at this point in the show, but the figure captures Rick’s wilder, brushed back hairstyle well.

Paint: Both previous Rick figures looked great … from the neck down. I lost count of how many Ricks I saw that stayed securely on the pegs thanks to uncharacteristically sloppy paint on the face. 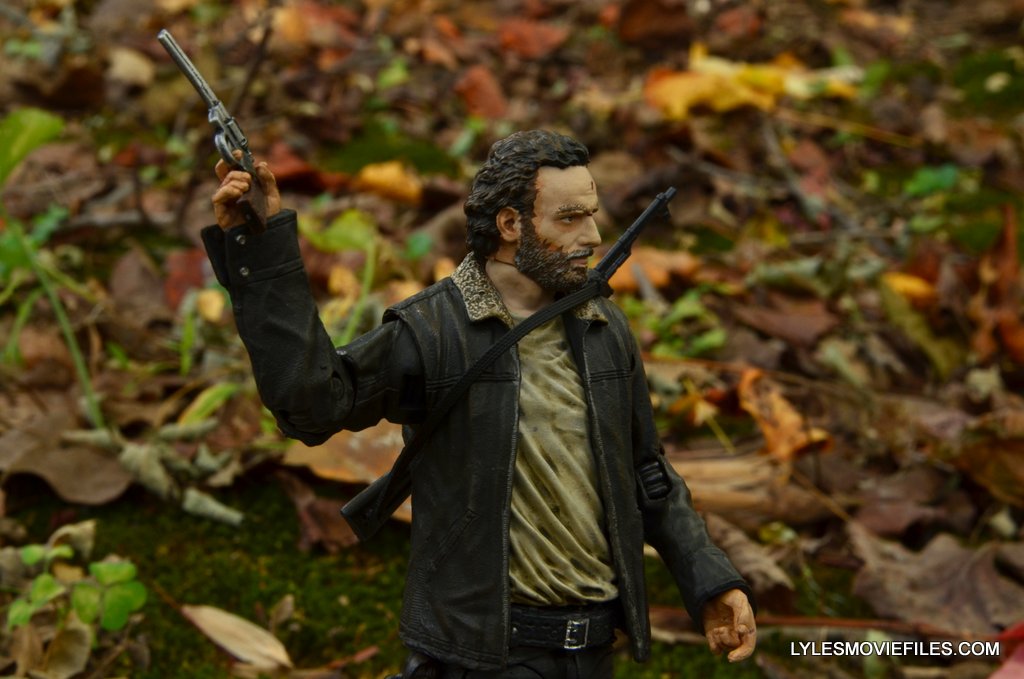 This figure still has a number of face painting issues, but they’re not a deal breaker.  Let’s start with the good first. In lieu of sculpting all the various cuts and scratches Rick sported, red marks are painted fairly convincingly.

There’s a wash under his eyes to convey the lack of sleep and general weariness of being on the run. It may be a hair too much, but the effort was appreciated.

Part of the reason I didn’t like the beard was because it made Rick look much older and weekly dye jobs probably aren’t a priority. The figure’s beard is mostly brown with grey sprinkles.  It’s better on the beard portion than the mustache area where it looks like it was hit once with a paintbrush before the painter moved on.

There’s some paint overspray around the sculpted beard and hairline portions, but it’s not that pronounced unless you’re looking extremely close to it. The eyebrows are missing some paint coverage as well, but I’m not sure if this was intentional to try and capture Lincoln’s faint eyebrows.

Beyond the head, the paint is sharp. I really like the wash that gives the shirt such a dirty appearance. The silver belt buckle is neatly painted, the jacket has a nice leather-like look and the boots have a good amount of grime as well. 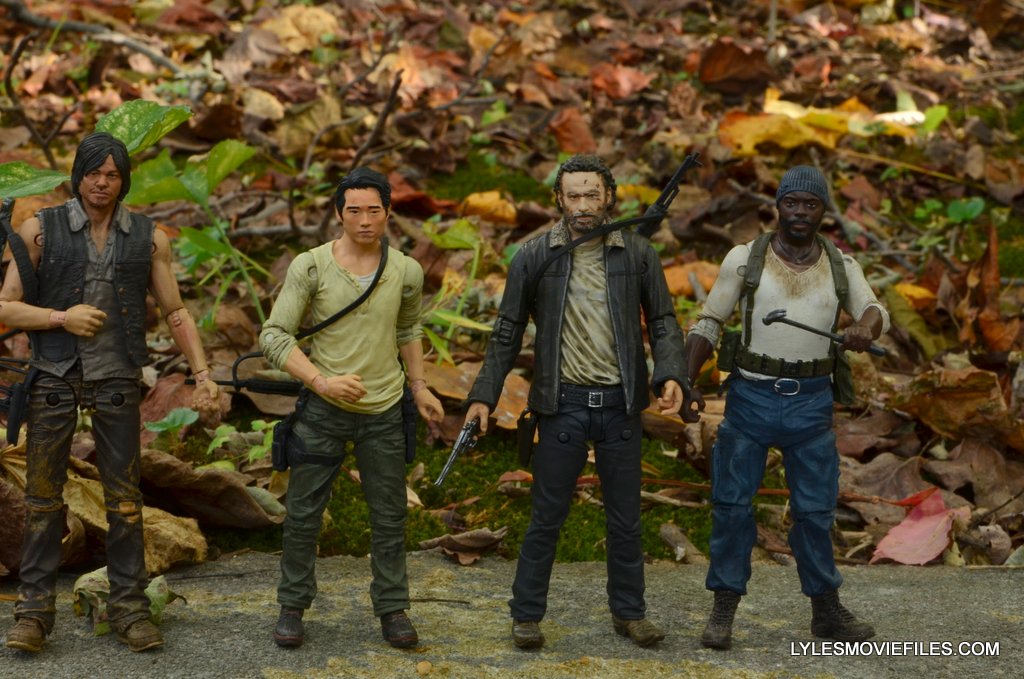 Scale: Rick is about average height. He’s just a little shorter than Daryl, but taller than Glenn who is shorter than he should be, but that’s not a fault of the Rick figure’s scale.

Articulation: Rick’s got most of the upgraded articulation with neck, ball-jointed shoulders, elbow swivels, wrist, back and forth hips and hinge hips and knee articulation. 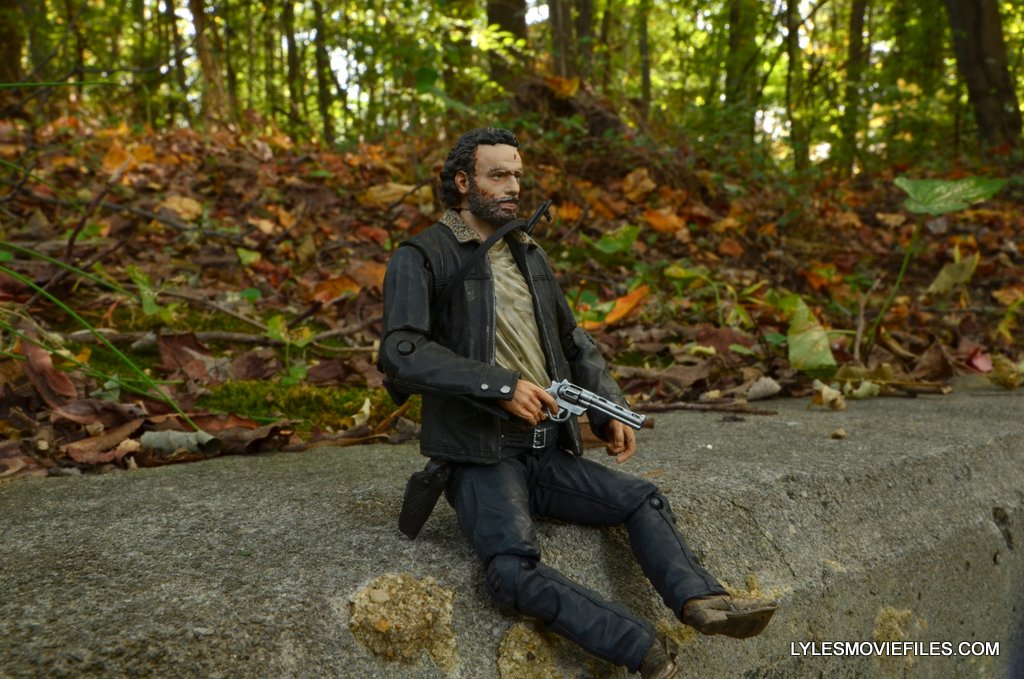 Rick doesn’t have that handy mid-torso articulation found on the Daryl chopper figure and so far that remains the gold standard of the line in terms of articulation scheme.

What really separates Rick and Daryl though is the ease of joint movement. Daryl’s was fluid and allowed for easy posing while Rick requires more effort than you’d expect.

You’ll be able to hit most poses, but you’re going to work at it more than what’s probably necessary. I wish the head had a bit more clearance as it largely just allows for side to side movement and little up and down. 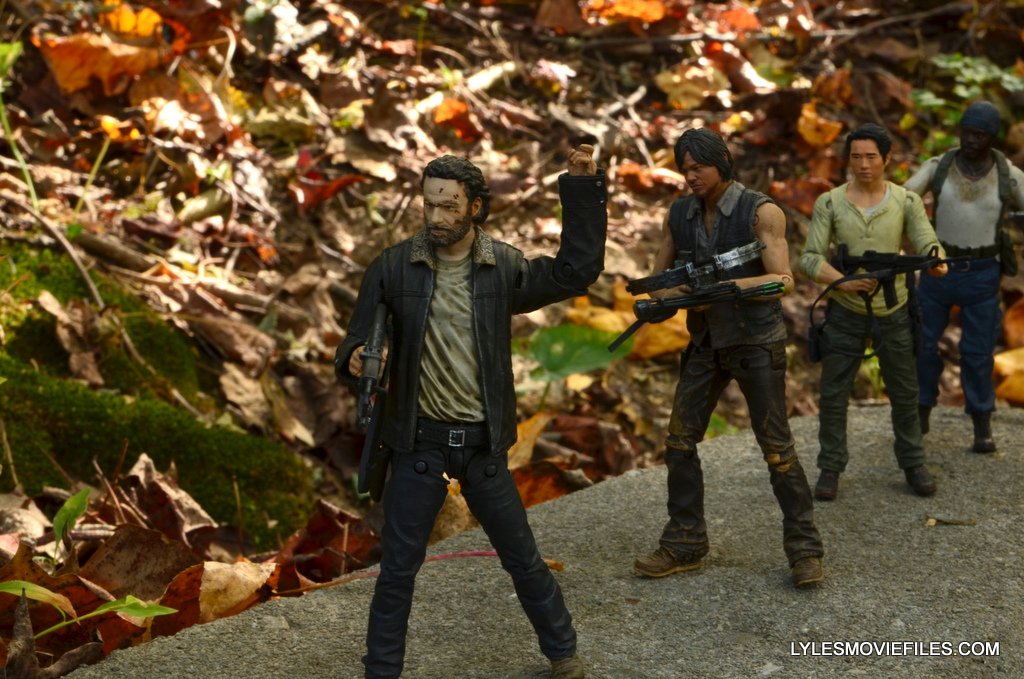 Accessories:  Rick wasn’t going to get cheated out of accessories. He comes with a magnum, machete and an AK-47.

The machete has some nice worn marks in it, presumably because Rick isn’t bothering to clean it every times he’s decapitating walkers. Of course I realized I didn’t have the machete packed midway through my trip to the photo shoot location so here’s a barebones pic of it.

Given the size, the magnum has an impressive amount of detail and the AK-47 is almost as good. The only thing holding it back is a bit of a legacy issue with Walking Dead figures. The material used for the machine guns’ shoulder strap is hard, thick plastic that has very little give weighing it down so much it’s a challenge to keep it on the back let alone the shoulder. 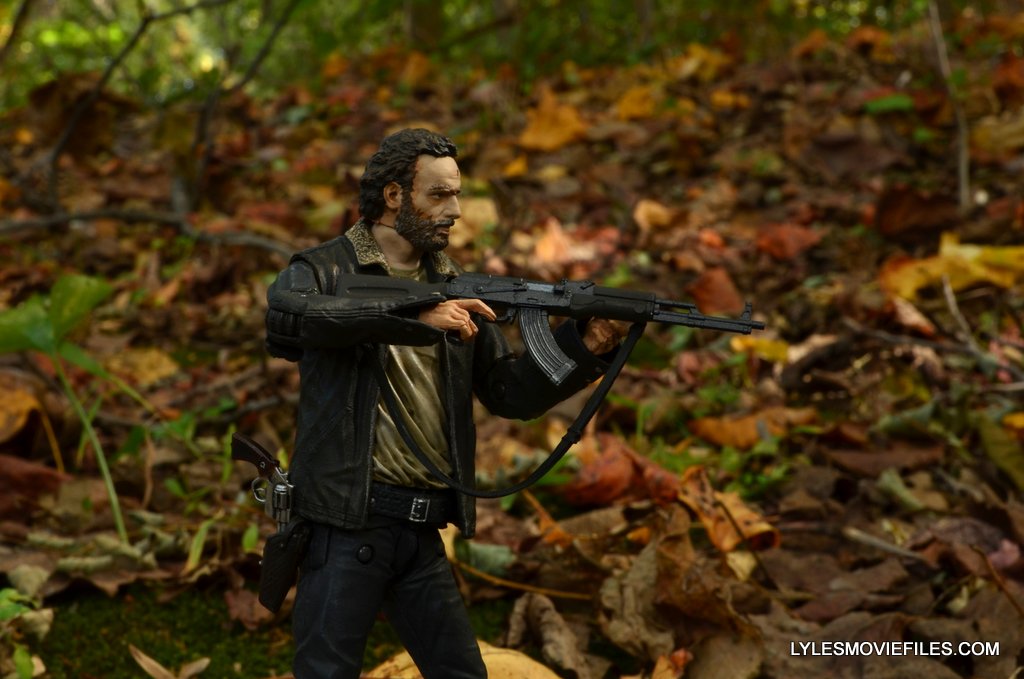 Another small gripe is I wish Rick had his machete sheath as the figure doesn’t have a place to store it if he’s holding the machine gun with both hands.

Worth it? I had some Rewards dollars so I got the figure for $10, which is more of a better deal for this line, but that ship has long sailed. The line’s $15 price tag isn’t the gut punch it would be in comparison to Hasbro’s Marvel Universe line, which clocks in at the same price with inferior paint and articulation.

I’m gonna assume if you’re into this line, grabbing the line’s best version of Rick is an easy sell. While this assuredly won’t be the last Rick we get from MT, you’re not going to be as hard up for a good Rick to prominently display in your collection now once you grab this figure. 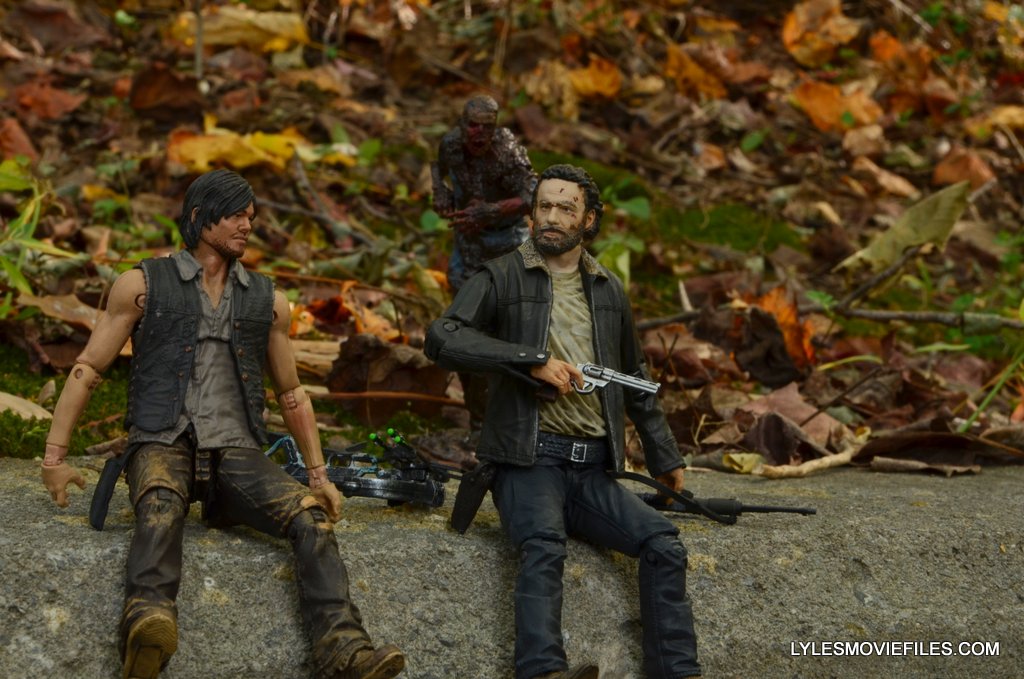 Where to get it? I found Wave 8 at Toys R Us, which is where Series 8 has just started popping up.

If you don’t want to chance wasting gas only to see Rick sold out, consider grabbing him from site partner Entertainment Earth, which should be releasing Series 8 any day now: Order The Walking Dead TV Series 8 Rick Grimes Action Figure from Entertainment Earth! 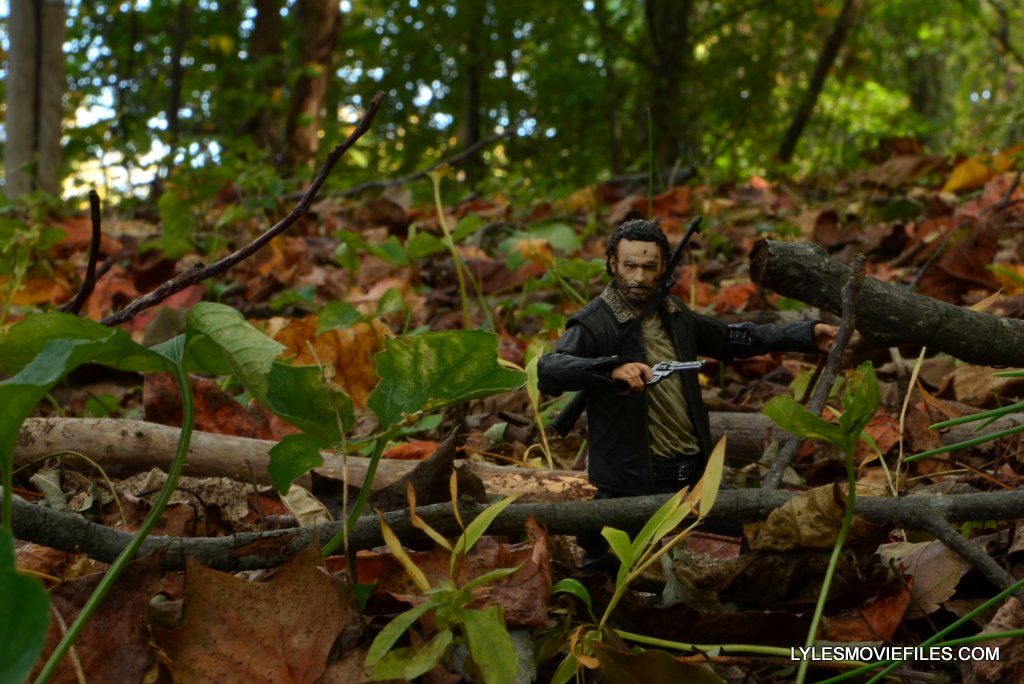 Or if you want to get the whole series, which isn’t a bad option considering the fan favorites included in the set, order the whole set:
Order The Walking Dead TV Series 8 Action Figure Set from Entertainment Earth!