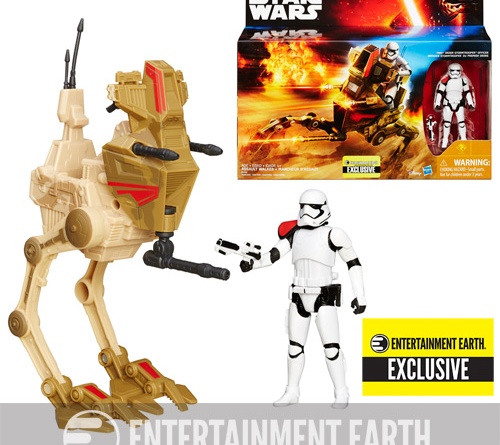 Entertainment Earth is among several retailers to get figure exclusives for Star Wars: The Force Awakens and one of its exclusives — the Desert Assault Walker and First Order Stormtrooper Officer — is in stock.

Entertainment Earth Exclusive! Crush the resistance in the desert with the Star Wars The Force Awakens Desert Assault Walker with First Order Stormtrooper Officer – Entertainment Earth Exclusive! This fantastic boxed set brings you a 3 3/4-inch scale action figure and a vehicle. Your army won’t be complete until you add this awesome armored officer and his ride to your squadron! Ages 4 and up.

The 7-inch tall Desert Assault Walker features an articulated chin gun, jointed hips, and moving ankles so you can pose it in a variety of fun and menacing ways. The brown vehicle sports red highlights and a unique deco you won’t find anywhere else!

The 3 3/4-inch First Order Stormtrooper Officer is designed to stand perfectly atop his mighty mechanical monster. He boasts fully articulated shoulders, hips, and neck. His blaster is painted with black details and is specially designed to plug right in to his thigh, rather than deal with bulky and antiquated holsters.

Entertainment Earth Exclusive! Bring home an entire army in one box with this Star Wars The Black Series Imperial Forces 6-Inch Action Figures – Entertainment Earth Exclusive. The set brings you four 6-inch scale plastic action figures in the employ of the Galactic Empire – including one you’ve never seen before as a toy! Each features awesome weapons and amazing paint, so you really should pick up a few of them to serve Darth Vader and the Emperor on your toy shelves. The 4 figures include:

Crimson Stormtrooper – World action figure debut! This red Stormtrooper has never before been seen as an action figure in any size, so here’s your chance to get the very first one. With 26 points of articulation, he measures 6-inches tall and serves the will of the Emperor with a rifle and blaster.

Lieutenant Oxixo – The Black Series debut! As a TIE Fighter pilot, this 6-inch tall figure serves the Imperial forces on the Death Star above Endor. He has a uniquely painted helmet with a distinctive silver crest, distinguishing him from his fellow squad members in the Imperial Navy. Lieutenant Oxixo boasts 24 points of articulation and a working holster.

R2-Q5 – The Black Series debut! With spinning wheels, a rotating dome, and a retractable third leg, this black robot conceals all sorts of secrets under his bronze panels! He measures 3 1/4-inches tall and sports 6 points of articulation.