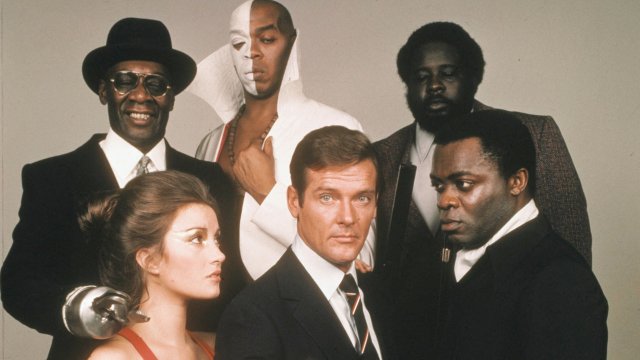 “Live and Let Die” marks a whimpering introduction to Roger Moore’s tenure as James Bond in the least 007 entry in the series.

There’s plenty of issues with this terribly dated, dull Bond spin on the popular blaxploitation movement, but Moore isn’t one of them. While Moore bashing is always popular among Bond fans, don’t kid yourself as  “Live and Let Die” is such a bizarre mess that not even Sean Connery himself could save it.

Besides a quick appearance from M and Moneypenny, a gadget magnetic watch and some gimmicky villains, this never manages to come across like a Bond film. Not surprisingly, the British secret agent makes for an ill fit in a world of voodoo, tarot cards, Harlem and jive-talk trying to stop a big time drug dealer.

Part of that is intentional as the producers reportedly wanted Moore to steer away from some of Connery’s signature Bond traits like wearing a hat and drinking vodka martinis.

Besides, they had vastly different approaches to the character anyway. Moore opts for a more personal, relatable, friendly Bond compared to Connery’s embodiment of cool. While Connery’s Bond could say the double entendre and think nothing of it, Moore’s version seems like he’s endlessly amused with his wit.

Following the death of three fellow agents, Bond is dispatched to learn the connection between a Caribbean dictator Dr. Kananga (Yaphet Kotto, “Alien“) and a Harlem drug ring led by Mr. Big.

Bond works best as a global traveler where he’s traversing the world. Keeping Bond in the U.S. for the majority of the film makes for a toned down experience for viewers accustomed to him traveling to much more exotic locations than New York and New Orleans.

Mankiewicz writes a decent quip-heavy Bond, but the groan inducing dialogue with decidedly un-PC epithets terribly dates the film. The inference that every black person in Harlem and New Orleans was working with a gangster was more than a little insulting as well.

Moore does what he can with the material, but his often bewildered expressions unintentionally mirrored my own. Further crippling his cause, Moore is saddled with two of the more underwhelming Bond Babes.

The first is Rosie Carver (Gloria Hendry), a CIA agent who’s major claim to fame is she’s the first black woman Bond bedded. Rosie is among the worst Bond Babes due mainly to Hendry’s performance.

In most of the earlier Bond films, Nikki Van der Zyl dubbed the voice for the Bond Babe. Van der Zyl was already dubbing most of Seymour’s dialogue, but Rosie’s character wouldn’t seem so jarring with an actress that could have delivered the lines better.

While a Top 10 in terms of stellar Bond Babe eye candy, Solitaire is a marked step back from previous love interests who had more of a personality than being a demure showpiece. The annoying Sheriff Pepper (Clifton James) makes his debut. In a less PC time perhaps he’d be somewhat more tolerable, but now he’s less comic relief and more irritant.

Director Guy Hamilton can’t find enough here to come close to rivaling his best Bond — “Goldfinger,” but he’s game to try.  He fully commits to the more outlandish elements of the script such as the prolonged voodoo ritual ceremonies and the amusing crocodile jumping scene, but there’s not enough dynamic moments available.

Kanaga’s fate is one of the more ludicrous moments in the series, but by that point, it’s not like a cool death scene was going to redeem the movie.

There are some bright points though. Kotto makes Kananga a formidable duel threat and the film’s action speedboat sequence is a standout.

But easily the best aspect of the film is Paul McCartney’s theme. Good luck not hearing that rocking anthem nonstop in your head for days after watching the film. It’s the rare Bond film where the theme is the most fondly remembered aspect of a film for good reason.

If you want to see an out of place Bond effort that would have been vastly improved with Shaft or Superfly in the lead role instead of 007, give this a view. Otherwise, just move along to some of Moore’s better Bond efforts.

Site partner Amazon.com has the movie available on Blu-Ray, which you can grab using this link: Live And Let Die [Blu-ray + DHD]