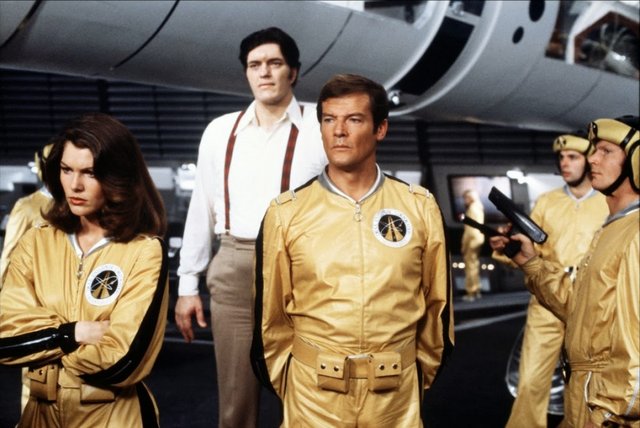 Roger Moore’s fourth film as James Bond is goofy as heck and that’s long before the laser firefight in outer space.

It’s easy to see why 007 purists would absolutely loathe the movie as it’s stupendously silly and not at all in the spirit of James Bond. Yet somehow Moonraker’s special brand of absurdity makes for one strangely entertaining Bond adventure. 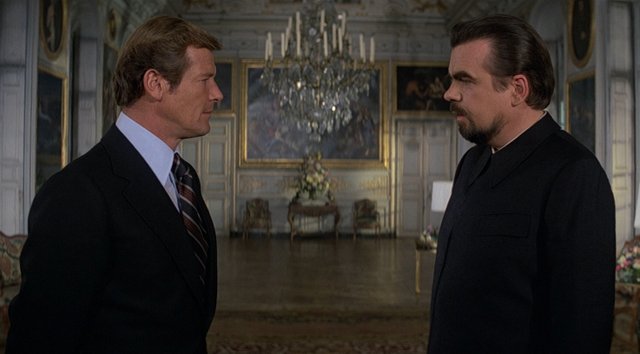 Yes, I’m sure this will cost me all kinds of credibility with Bond aficionados, but Moonraker is the most fun Bond outing in the series.

Not best of course, but it’s the one installment where the filmmakers give in to their instincts and treat the property with a bit more flair for fun. After all, Sean Connery forever established himself as “The Cool Bond” and Moore was better suited to this kind of fantastical take on 007 anyway.

With the sudden disappearance of the Moonraker space shuttle, Bond’s investigation leads him to wealthy industrialist Drax (Michael Lonsdale), who has a sinister plan to destroy the Earth and repopulate it with a master race of genetically perfect specimens.

Bond gets back to his globetrotting roots in this installment leading to a thrilling gondola chase in Italy and a cable car battle in Rio.

The film marks a first as this was the only time a henchman returned from a previous Bond outing as Richard Kiel came back to reprise his role as the near indestructible towering assassin with the steel teeth. Jaws is the source of many of the film’s more humorous moments, which is a testament to Kiel for conveying so much with just his expressions.

Jaws even manages to make a love connection in one of the movie’s more over the top moments. The magic of Moonraker is that it continues to build from one more ludicrous moment to the next and if you’re willing to stop questioning it, the film becomes that much more enjoyable.

Attempting to recapture the same magic as The Spy Who Loved Me’s Anya Amasova, Bond finds a reluctant ally in CIA operative Holly Goodhead (Lois Chiles). Chiles’ performance is too mechanical and stiff, making what could have been a fun female Bond counterpart a cold, unlikable character. Chiles has little chemistry with Moore as well leading to Goodhead frequently earning a spot on Top 10 Worst Bond Babe lists. 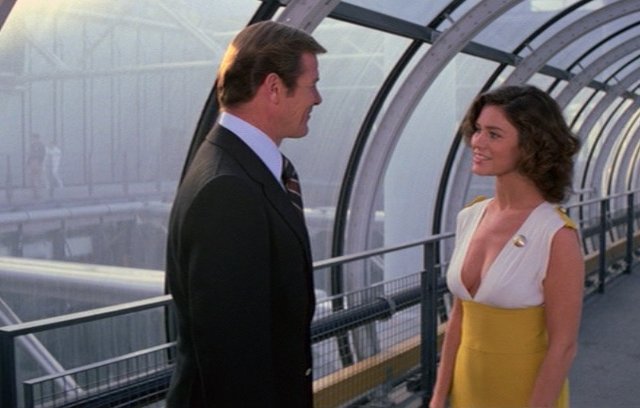 With a pompous attitude and boundless vocabulary, Lonsdale establishes Drax as one of my favorite Bond villains just because of his constant irritation of Bond like he’s more of an irritating rash than a threat to his plans.

Moore seems to be having a blast as the sillier antics are an ideal fit for his less stoic, playful take on Bond. To that extent, Moore may be the most versatile Bond as he can make his 007 work in any setting … even space.

Director Lewis Gilbert (The Spy Who Loved Me) again wastes little time starting the film with a daring space shuttle hijacking and an amazing skydiving sequence. The action sequences are certainly a major highlight of the film. 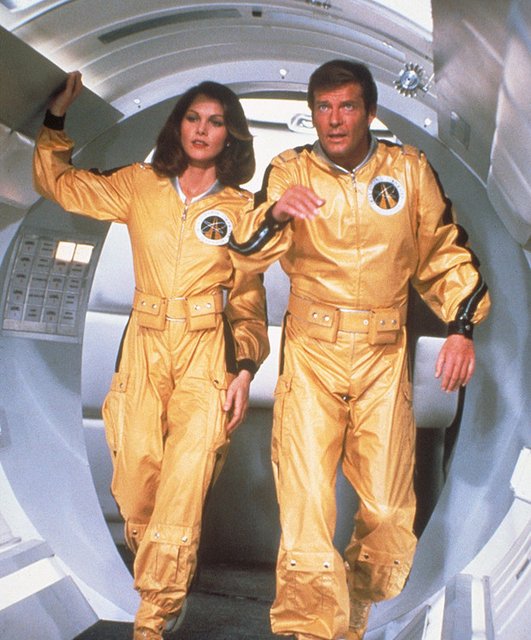 Gilbert is much more playful regarding the action scenes. Save the fight in a museum, which seems to be staged simply to watch Bond and his assailant break priceless artifacts, the action is shot with a dazzling, realistic slant.Upon the battle’s conclusion however, Gilbert decides to have some fun and ends the scene with a sight gag that’s just missing a rimshot and a laugh track. It’s somewhat off-putting considering most Bond fights end up with a pun not with a visual punchline. That approach tremendously aids Moonraker’s finale.

The final act, clearly trying to hop aboard the surging sci-fi phenomenon sparked by Star Wars, sees Bond and Goodhead hitch a ride onto Drax’s space station complete with a laser-filled shootout.

Despite its lofty budget (reportedly more than the first six films combined), most of the space effects look pretty terrible. If you’re like me, you’ll be far too amused to care. Space is not Bond’s forte, but he sure does make it fun.