This week’s title was a clear indicator Flash was going to be taking a backseat, but even with Barry on the sidelines for much of the episode, this was a strong outing as the spotlight was squarely focused on his supporting cast.

Team Flash figures the problem with Professor Stein is he needs someone compatible to merge with as Firestorm. With Robbie Amell off to co-star in The X-Files, we knew Firestorm needed a new co-pilot and since Jason Rusch was previously revealed in a throwaway role the show was going to have to introduce a new character to fill the spot.

Caitlin came off pretty poorly with her haste to bring Hewitt into the fold so quickly as she completely revealed all of Team Flash’s secrets to a complete stranger. I’d almost buy Cisco excitedly doing this, but for Caitlin it was way out of character for her and an unbelievably dumb move considering all the drama from trusting Harrison Wells. Random question: where was Jay Garrick while all this was taking place? At his non-existent Earth-1 apartment?

Barry and Stein try their luck with Jackson, but he’s not interested in anything that has to do with the event that ruined his football dreams.

I really appreciated that Jackson wasn’t a typical me-first football player and was actually a team guy. He’d also exhibited heroic traits when he helped his teammate get to safety at his own expense. It made Jackson’s decision to once again be a member of a team and be able to help others feel more genuine not just for the sake of advancing the plot.

Hewitt proves incompatible with Stein, but the attempted merge triggers Hewitt’s latent metahuman powers, which he quickly uses to start trouble for being passed over to become Firestorm. Turns out Caitlin didn’t bother doing anything remotely resembling a thorough background check and Hewitt had repeated run-ins with the law. Caitlin, it’s called Google.

In the comics, Hewitt was the Firestorm villain Tokamak, who created the Firestorm ally Firehawk before trying to simulate the experiment to create his own super-powered identity.

Once Jax merges with Stein, Hewitt proves a pretty easily dispatched foe. Flash and the new Firestorm force Hewitt to overload his energy absorption and quickly take him out. As far as big villain fights go, this was pretty underwhelming. Weak villains is hardly a new issue for the show though and this was a more character-driven episode than the villain of the week.

Jax’s addition was smart as the show didn’t stick to the original origin for Firestorm in making Ronnie an engineer/science geek instead of the comic take of a popular jock. Now that dynamic is back and should lead to some interesting personality clashes on DC’s Legends of Tomorrow.

In the episode’s other major subplot, Iris decided she was going to confront her mother Francine and tell her to stay out of her life. Candice Patton has gotten much stronger material this season than simply being Barry’s unrequited love interest and she’s delivered big time. The writers also are making her more than just “The Flash’s” version of Lois Lane constantly needing The Flash to save her from some trouble. 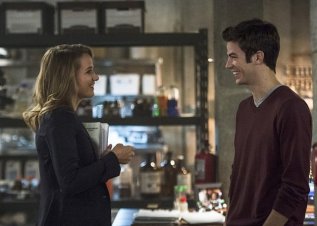 Here, Iris’ investigative skills come into play as she checked out Francine’s story of having a fatal illness with months to live. While that proved true, Francine hasn’t been totally upfront with either Iris or Joe and hadn’t mentioned the son she had eights months after leaving them. No doubt this is Wally West and this was a smart way to work around the comic relation of the two where Iris was Wally’s aunt. I’m looking forward to seeing how he gets integrated into the show.

Joe had his own subplot to tackle as Mercury Labs’ boss Amanda Palmer informs him a man who looked exactly like her old partner Harrison Wells stole a valuable piece of tech. I appreciated that Palmer reached out to Joe and neither blew it off like it must have been some wild coincidence.

While he didn’t want to reveal this bombshell to Barry, Joe did finally talk some sense into him about shelving his first love crush on Iris and exploring possibilities with Patty, who’s clearly interested. Patty is investigating reports of a towering shark running around Central City and Barry offers to help.

Despite the excellent work done on Gorilla Grodd last season, I figured King Shark was too CGI intensive to be more than a little Easter Egg for fans. But that final scene with King Shark looking like he stepped right out of the comic and throttling Flash was amazing.

Patty tries to make the save, but her bullets are completely ineffective. A mystery figure arrives and knocks out King Shark with the same device stolen from Mercury Labs and Flash runs after his rescuer who lowers his hood to reveal it’s Harrison Wells. Next week is gonna be real interesting.