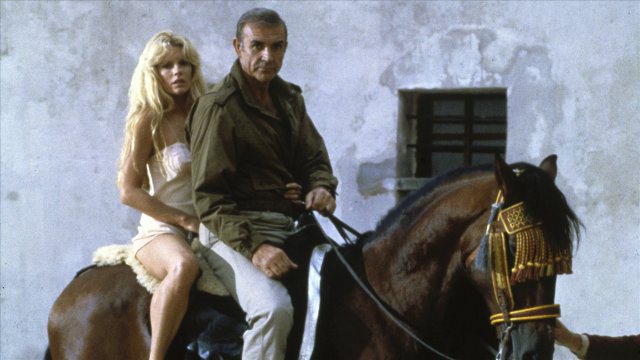 Never Say Never Again has a special place in my cinematic heart as it was my first exposure to James Bond. But in doing this 007 retrospective, this bastardized Bond is probably best left out of the mix when discussing the best in the series.

Ironically, this was the redheaded stepchild of the franchise as it was not produced by MGM. Thunderball co-writer/producer Kevin McClory’s victorious lawsuit against Ian Fleming earned him the right to make his own 007 film with the caveat that it had to be a Thunderball remake. 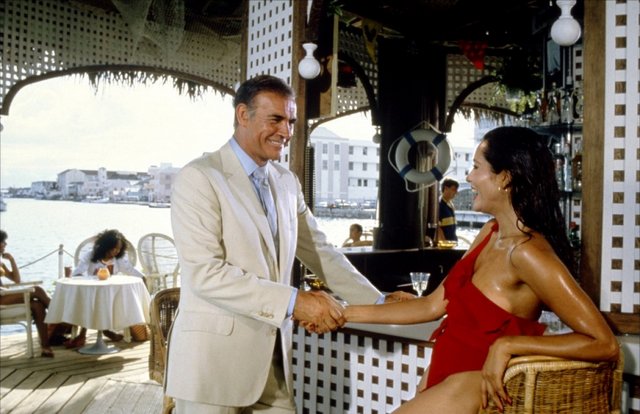 While it wasn’t a Dr. No, Goldfinger or From Russia With Love, Thunderball is definitely a Top 10 Bond films so McClory wasn’t going to make a better version.

Shame McClory didn’t get into this legal fracas over Octopussy or Live and Let Die as those could have benefited from a redo. At the very least, we could have seen Sean Connery taking his spin with a Roger Moore Bond film instead of replaying one of his earlier Bond movies.

Recycling most of the plot elements of the superior Thunderball means Never has an overly familiar feel even moreso than most Bond films. 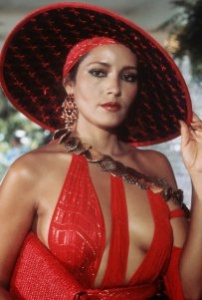 And watching Connery work his charms on Basinger just seems wrong as he’d more suited to play her grandfather than her lover.

Despite the plot limitations and questionable casting calls, Never does have a lot going for it.

For starters, of course is the return of Connery to the role that made him a cinematic icon. Even at 52 and 12 years removed from his last turn as 007 in Diamonds Are Forever, Connery was still dynamic and exuding charisma.

Semple finds enough leeway to add a few twists to not make it a complete rehash. The points where the plot doesn’t feel like it’s checking out scenes is when the film is at its freshest. 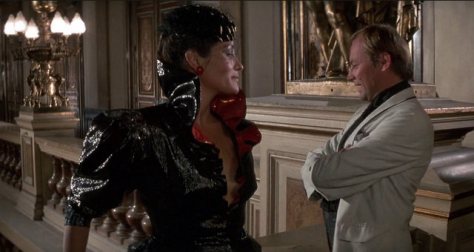 Since he owned the rights, McClory’s production once again brought SPECTRE to the forefront. Never features a very much still alive and non-smokestack victim Blofeld (Max Von Sydow).

Brandauer and Carerra make for terrific villains with Brandauer embodying a sleazy, oily tycoon and Carerra going over the top big time as a crazed femme fatale.

Connery rarely gets overshadowed, but he was fighting hard not to have the film stolen by Brandauer and Carerra who played their roles masterfully. And it was also cool to see Felix played by a black guy in a change from the norm.

Lani Hall’s title theme is catchy and definitely one of the best when a great theme was no longer a given in the series.

There’s some nice moments like the undersea escape from the sharks (directed by Thunderball undersea director Ricou Browning) and the brawl at the restoration clinic, but Never lacks that one signature action sequence that everyone fondly remembers. Except for that oddly interesting video game battle, which is the one time where a Connery Bond feels like it’s trying to catch up to pop culture.

If you’ve never seen Thunderball, this final Connery Bond becomes a lot more enjoyable, but matched up against one of the more exciting 007 films, “Never Say Never” fails to do it better.