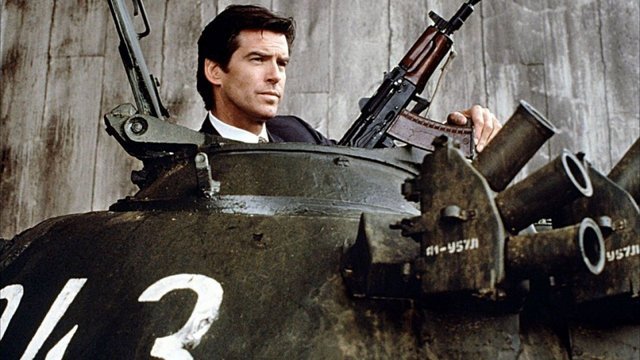 For years I considered Pierce Brosnan to be the perfect James Bond. There’s little to change my opinion in GoldenEye, which remains my favorite Bond film.

GoldenEye is Brosnan’s shining moment as Bond in a period where the franchise was in a state of flux and fans questioned if Bond was still relevant. Director Martin Campbell and screenwriters Jeffrey Caine and Bruce Feirstein tackle those questions in a thought-provoking manner without dulling what initially made 007 so endearing.

Nine years after a mission resulting in the presumed death of his friend 006 Alec Trevalayn (Sean Bean), James Bond (Brosnan) is sent to stop a faction from unleashing the full might of a dangerous electromagnetic pulse weapon – the GoldenEye.

Bond’s only lead is Natalya Simonova (Izabella Scorupco), a technician at the Russian satellite communications outpost that accessed GoldenEye.

GoldenEye marks the introduction of Judi Denchi’s M and Samantha Bond as Miss Moneypenny. Both take Bond to the verbal woodshed as a way of illustrating that Bond’s enduring sexist traits wouldn’t be carrying over with this new regime. It’s a bit forced ‘yea female empowerment!’ instead of simply making it the new status quo.

As the script was written for Dalton’s more serious assassin 007, Bond has a few nifty gadgets — Q (Desmond Llewelyn) wouldn’t send him to the field with inferior weaponry after all — but not to the point of excess. That would be an issue that would regrettably come to define the rest of Brosnan’s films.

Brosnan doesn’t have to carry the load on his own thanks to the series’ best assemblage of villains.

In 006, Bond has his evil mirror image. He’s just as highly trained, knowledgeable in Bond’s tactics and daring. This was the movie than made me a major Bean fan and he is tremendous here. Alec provides Bond with an opponent that cuts him to the core more than any other foe due to their friendship.

Bean and Brosnan handled most of their stunts in the climactic battle giving it a more authentic, gritty feel to fully convey the friends turned bitter rivals theme.

Famke Janssen has never been as stunning or fun to watch than this revelatory role. As Alec’s right hand woman, Xenia got supremely aroused whenever she inflicted pain on her victims. On the Bond Babe front, Janssen and Scorupco more than hold their own with any other duo in the franchise history.

Oddly, considering it’s sung by Tina Turner and written by U2’s Bono and The Edge, the main theme isn’t the classic you’d think based off that impressive collaboration.

In his debut spin with the franchise, Campbell makes a firm case for best direction in the series staging action sequences we hadn’t seen repeatedly. That’s not an easy feat considering this was Bond’s 19th film and referencing earlier battles had become a common occurrence.

Campbell finds a lot of fresh fertile action ground starting with a massive bungee jump — the pinnacle of extreme sports at the time — a dive into a helicopter and the signature tank chase. Regardless of the scenario, Campbell makes sure to treat Bond seriously so there’s no double-taking pigeons anywhere in sight.

Not that the film lacks a more comedic side, largely provided by Robbie Coltrane (The Harry Potter franchise) and Joe Don Baker (returning as a Bond ally after playing a villain in The Living Daylights).

Campbell is smart enough never to make Bond look foolish even if Brosnan could smirk and charm his way out of any potentially negative scenario.

GoldenEye provided a clear blueprint in how to make Bond not just matter, but wildly exceed audience expectation into the new millennium.

With the ideal Bond, a worthy adversary, gorgeous Bond Babes and a director skilled enough to fully maximize their potential, GoldenEye stands atop the rest as the best James Bond film.