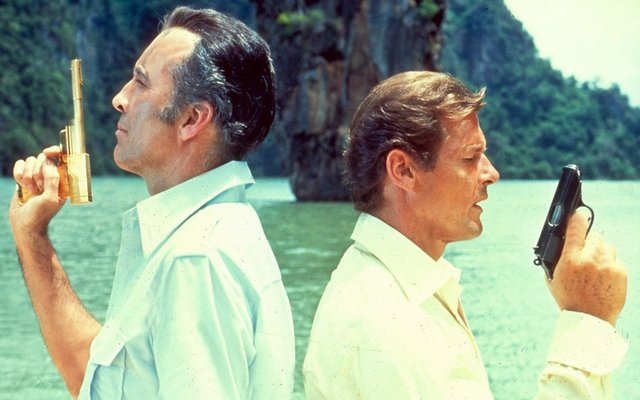 Perfectly embodying the best and worst of the Roger Moore 007 era, “The Man With the Golden Gun” is a fun Bond adventure that ultimately fails to fully meet its potential.

It’s got the essential elements of a great Bond film — a terrific plot, a mostly serious portrayal of 007,  one of the series all-time classic villains and a memorable henchman.

Unfortunately, it’s also saddled with some of the negative hallmarks of a Moore Bond outing with underwhelming Bond Babes, action sequences intended more for laughs than excitement, the catch up mindset to the new hot trend and another appearance from J.W. Pepper.

The plot is great departure from the Bond stops mad scientist with dreams of world domination that was becoming overdone. Bond finds himself the target of Scaramanga (Christopher Lee), the world’s most dangerous marksman and owner of the golden gun.

Lee, the cousin of Bond creator Ian Fleming, is undoubtedly one of the best actors to play a 007 villain so it’s no surprise his performance is one of the film’s highlights.

Aiding Scaramanga is his personal assistant/butler/henchman Nick Nack (Hervé Villechaize). While one of the more divisive henchman as he’s not the towering, imposing presence of some of his predecessors, that’s exactly why I’m such a fan of the diminutive  lackey.

Bond travels to Hong Kong to learn why Scaramanga could possibly be targeting him and finds his mistress Andrea (Maud Adams). Bond’s treatment of Andrea is atypical of his normal disarming — and disrobing — approach, but it helps convey Bond isn’t about playing games and being charmed with an assassin gunning for him.

Screenwriters Richard Maibum and Tom Mankiewicz do right by Moore this time allowing his more cavalier take on Bond to work well in the film. There’s a couple of silly moments, but this is one of the better serious Moore Bond portrayals.

Pepper’s return would have been more enjoyable had the writers ditched the needless racist remarks he spews as often as his tobacco. It’s a shame as he’s actually funny the rest of the time.

This time, Bond is chasing the Kung-Fu craze so Bond has an out of place martial arts battle in a dojo. It is such a worthless scene in the context of the film and adds nothing besides Bond battling in a karate gi. In fairness, Bond has a pretty nice moment in this scene with a cheapshot move that would be more fondly remembered in “Raiders of the Lost Ark.”

Bond gets some measure of assistance from fellow agent Mary Goodnight (Britt Ekland). Ekland reportedly got the role after producers saw her in a bikini, which gets worked into the script in a funny bit with Scaramanga.

Besides her bikini body, Goodnight is fairly worthless putting herself in damsel in distress situations and clueless putz that threatens to get Bond and herself killed in another.

M (Bernard Lee) and Q (Desmond Llewelyn) are more engaged than in previous films serving as involved mission advisers rather than giving Bond an assignment and vanishing for the rest of the film. As a big fan of Lee’s M, that is definitely a plus.

On his fourth and final Bond film, Director Guy Hamilton livens the action up considerably from “Live and Let Die” with some well-staged fights.

In a fun nod to “Diamonds are Forever,” Marc Lawrence appears to reprise his role as a hitman coming to collect the bounty on Scaramanga.

Moore was still spry enough to do a decent portion of his stunts allowing for some good physicality in the hand to hand scenes. The requisite chase scenes are also enjoyable except for the silly whistle during the spiral roll, which remains one of the worst bits in the series.

The final showdown with Scaramanga is thrilling although the tacked on super weapon gadget subplot never gets developed enough to really matter. When you’ve got Bond and Scaramanga having a good old fashioned gun duel, everything else is just fluff anyway.

This isn’t the best Moore Bond film, but its flaws are largely overlooked thanks to a dynamic villain and a fun premise.

Order Bond by Design: The Art of the James Bond Films Book from Entertainment Earth!