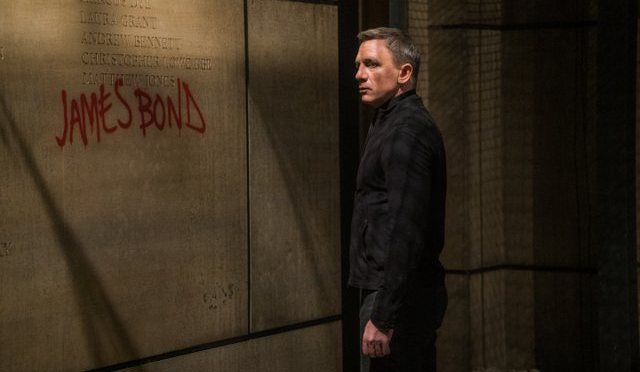 Daniel Craig has starred in a couple of really great movies playing James Bond, but in Spectre he takes his turn in a more throwback style film.

Neither as revelatory as Skyfall or fresh as Casino Royale, Craig’s fourth turn as 007 offers that old Bond spirit shot under the direction of Sam Mendes. Is that a good thing?

Continuing a trend established with the first two Craig 007 films, Spectre is a direct follow-up to Skyfall and not a stand-alone adventure.

Series newcomers and fans with short memories may want to watch the previous three Craig films to get all the references and continuing plot threads.

Bond is tying up loose ends for his deceased boss (Judi Dench). Current M (Ralph Fiennes) is once again fighting on behalf of MI6’s relevancy in the modern world as the head of MI5 (Andrew Scott) is threatening to shut it down in favor of a much more advanced worldwide surveillance system.

M’s subplot does tie into the main story, but it feels like a retread from the last film. On the plus side, it gives M, Moneypenny (Naomie Harris) and Q (Ben Whishaw) more to do than wait on Bond to finish his mission.

The trail leads Bond to Rome where a mysterious shadow organization and its leader, Franz Oberhauser (Christoph Waltz, Django Unchained), are plotting their latest moves.

Oberhauser has a fantastic introduction scene, but he and his group become far less threatening as the film progresses. Waltz’s character quickly becomes a case of diminishing returns with the random reveal of his other alias and potential connection to Bond.

Bond can’t determine the group’s end game though or evade its powerhouse Mr. Hinx (Dave Bautista, Guardians of the Galaxy). Hinx proves a welcome throwback to iconic henchman like Jaws and Odd Job.

In one of the film’s best action scenes, Hinx pursues Bond in a thrilling car chase that recalls some of the earlier highlights of the franchise as well as some modern inspiration from the ‘Fast & Furious’ series.

Mendes doesn’t hide his admiration for the earlier Bond works here making subtle and other times obvious nods to the golden era of the franchise. For Bond diehards, seeing Craig in a more traditional Bond film will be a treat.

The trade-off though is the payoff would have been far more satisfying had the Craig era films devoted greater attention on extravagant fun instead of delving into Bond’s psyche. Combining the anything goes spirit of the Roger Moore/Pierce Brosnan era Bond films with the more grounded Craig films often results in a major style clash.

Desperate to track down the group again, Bond partners with Madeleine Swann (Lea Seydoux, Mission: Impossible – Ghost Protocol), a young woman with a personal connection to the organization she knows as SPECTRE.

No writers have effectively been able to give any depth to a Craig Bond love interest since Vesper Lynd in Casino Royale. Tacking on a romantic sidekick doesn’t make sense in the Craig Bond universe and it’s why the connection with Madeleine feels so forced.

Their chemistry is more about the obligatory Bond Babe and less making Madeleine a worthy or even consistently written companion. The initial brief resistance before dropping the dress feels far more insulting to the female characters than it ever did under Sean Connery’s watch.

Part of it is due to Craig’s overly serious portrayal of Bond, which works when he’s out on the field or blowing off reprimands to carry out a mission. He’s too distant and cold to be an effective charming seducer. It’s hard to see why the female characters become so invested beyond a one-night stand.

Roger Moore took a lot of flak in his later films for being so much older than his female co-stars, but the 17-year age gap between Craig and Seydoux is hard to ignore here. Despite all the hype, Monica Bellucci’s appearance as a Bond Babe at 51 doesn’t amount to much as she has a quick, poorly developed cameo.

Bond does some globe-hopping in this installment as his quest takes him to Mexico City, Rome, Austria, Tangier and back to London. Mendes again does a stellar job of providing a sense of character to the locations so there’s no mistaking Bond’s stint in Mexico City with the snow-covered Austrian backdrop.

Of the action sequences, Mexico is definitely a standout thanks to an extended tracking shot with Bond chasing a SPECTRE agent through the packed costumed crowd highlighted by a breath-taking helicopter battle above the festival attendees.

Sam Smith’s ‘Writing’s On The Wall’ isn’t the worst theme, but it’s definitely one of the more nondescript ones. Adele was certainly missed.

At a series record two hours and 28 min., the film could have lost 30 minutes and not missed anything of importance. The first hour and a half is electrifying with all the dynamic elements that make for an excellent Bond adventure. The final act felt too restrained and small-scale considering the action spectacles Mendes already trotted out.

While it would be a nice sendoff for Craig and end of the series, you know there’s still far too much money in continuing Bond’s adventures anytime soon.