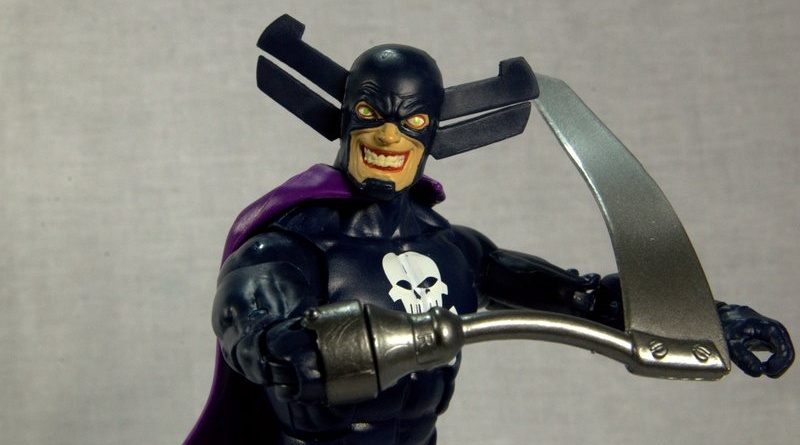 I’m finally winding down the Marvel Legends Ant-Man wave looking at one of my favorite Marvel Universe villains.

Grim Reaper is one of those perfect Avengers villains. Being the brother of Wonder Man (and The Vision to an extent…it’s complicated), GR always makes the fight personal in a way most Avengers foes can’t. Additionally, he’s powerful enough to take on the team on his own — always a good trait for a villain.

Let’s find out if this figure deserves new life on your shelf or needs to stay buried on the pegs. 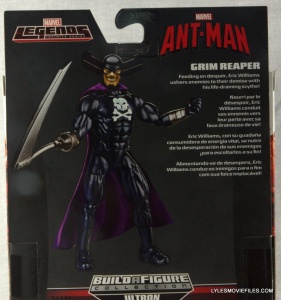 Packaging: Another figure, same old story with my least favorite packaging. The red/black color scheme is what it is at this point.

Like the rest of the figures in the line save for Ant-Man, the side portion has a drawing of ants as opposed to individualized character portraits. The package back gives a quickie bio to complete the underwhelming presentation. To Hasbro’s credit, the packaging remains my biggest complaint for this wave. Unfortunately, I screwed up and accidentally deleted the picture with GR in the package. 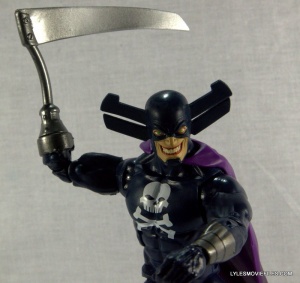 Likeness: With so many looks to choose from, Hasbro thankfully went with his most iconic outfit.

Hasbro seems to alternate between classic and the modern costume that will be outdated by the time the figure reaches shelves. My classic leanings don’t always win out with costume selections, but I was ecstatic we get this costume choice and it’s captured great.

GR’s head sculpt has a lot of personality. I envision him right in the middle of his monologue vowing to destroy the Avengers once and for all. I wouldn’t want this for every character, but it’s very appropriate for him. 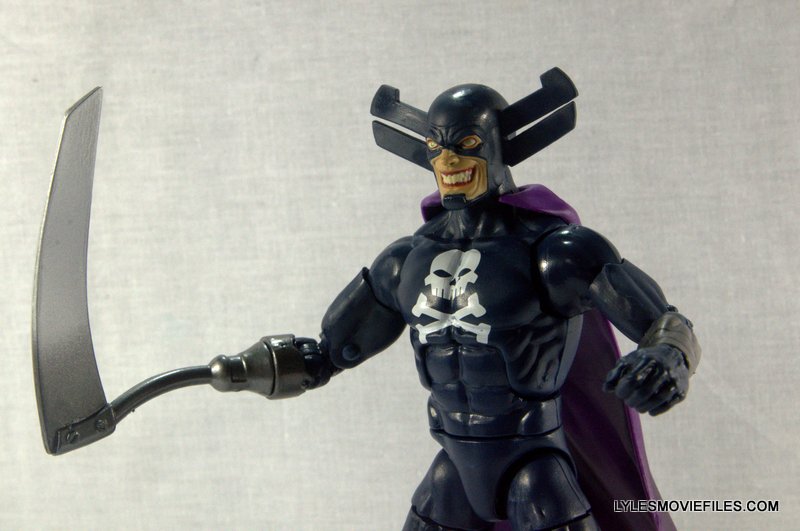 Scale: GR was the first to get this newer body type, broader than the Black Panther base body, but not as out of scale as the Wrecking Crew/Thor figures.

It’s a perfect middle ground base to distinguish lithe, athletic regular characters like Hawkeye from the power enhanced guys like Captain America. There’s a little gap in the right leg that breaks up the overall smooth appearance of the figure though and I hope that’s not a consistent problem with this new body. 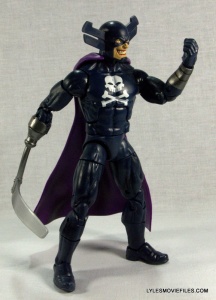 Paint: The maniac expression requires immaculately painted eyes otherwise the whole figure would look off. Fortunately mine are crisp and I haven’t noticed that being an issue with other figures I’ve seen on pegs. He’s been borrowing The Joker’s lipstick again as his lips are an extreme red, which is a bit distracting, but it certainly conveys that this is an unhinged character. 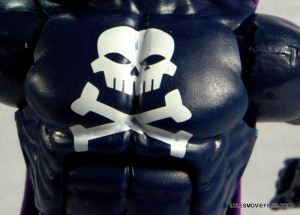 Since the rest of the figure is molded in the blue black plastic, there’s not a lot of other paint issues to be on the lookout for beyond the skull tampo.

Mine could have been applied cleaner as there’s numerous little chips and “holes,” but a little white paint will fix it easily enough.

Articulation:  Despite the new base body, GR has the standard articulation we’ve come to expect from the line. 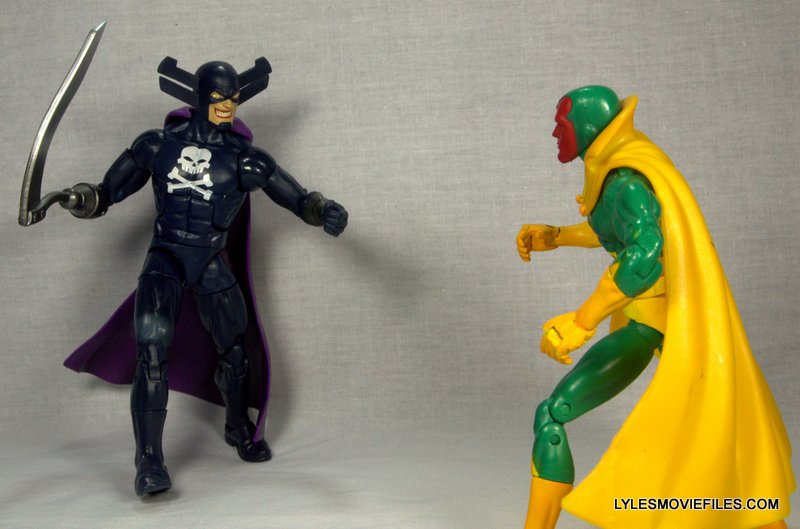 While it may initially be stiff, Reaper’s scythe does swivel so you can spin it around if you want, which is a nice bonus. 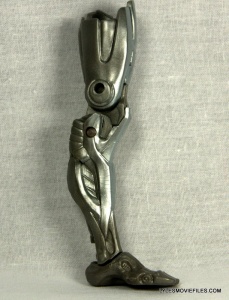 Accessories: It’s hard to  doesn’t lend himself to any accessories so this time out, his only pack-in is the left leg to the Build-a-Figure Ultron based off his “Avengers: Age of Ultron” design.

The one removable aspect of the figure is the cape and it’s one I really don’t like. 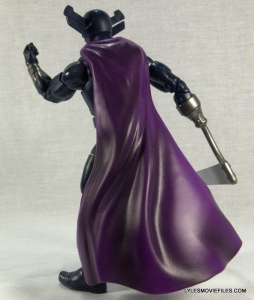 The cape doesn’t wrap around GR’s neck like it should and hangs like a Superman cape, but unfortunately it’s not a good fit.

The cape plugs into a hole in the back, but it “floats” up and will need some superglue to lay correctly on the shoulders. It’s the biggest goof with the figure and I hope Hasbro changes up the cape mold

Worth it? Grim Reaper is one of the classic Avengers villains. Hasbro has done an exceptional job adding to the punching bag ranks for our heroes and he’s a standout.  For the retail $20 price, his value holds up, but since the wave has been out for a bit you’re just as likely to find a better deal online. 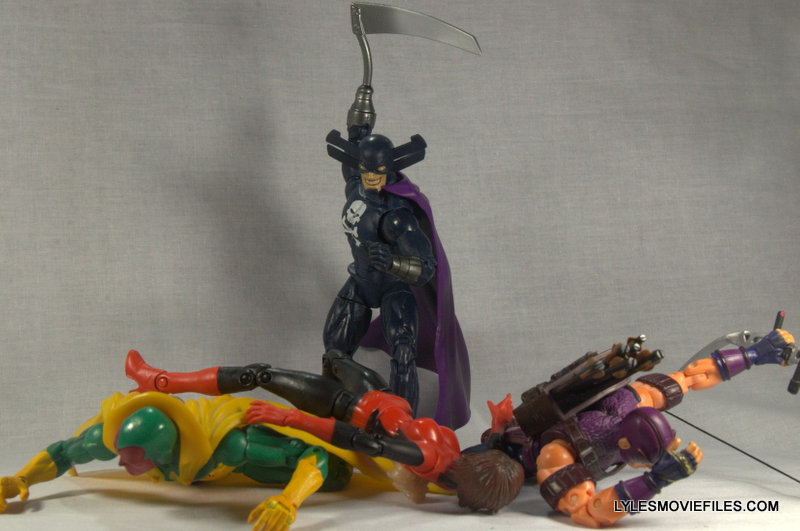 This is a really good figure. I love the expression and new body. With a better cape and those minor paint issues addressed, he’d earn a perfect score. 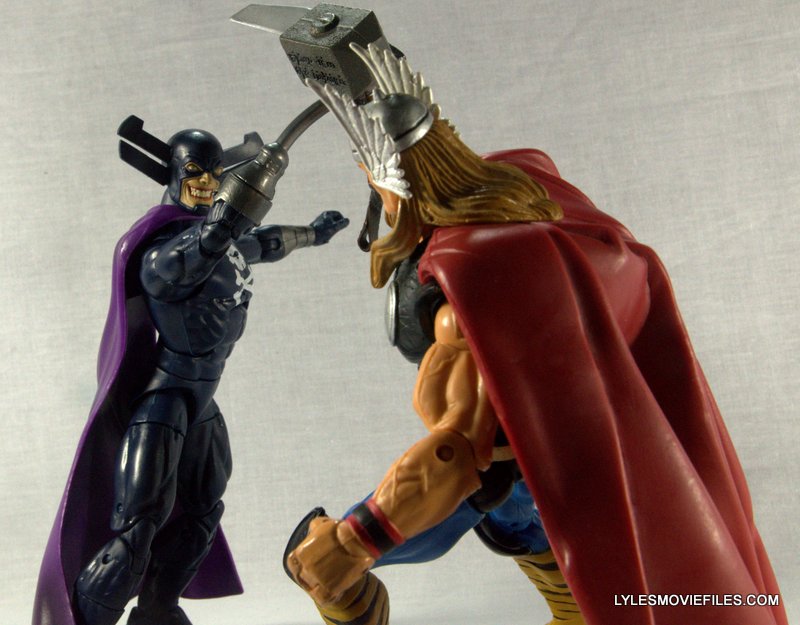 Where to get it? The Ant-Man wave is currently available at Toys R Us and Target. If for some reason you can’t find Grim Reaper in stores, you can try some of the site partners.

Amazon.com has the single figure available now for $17: