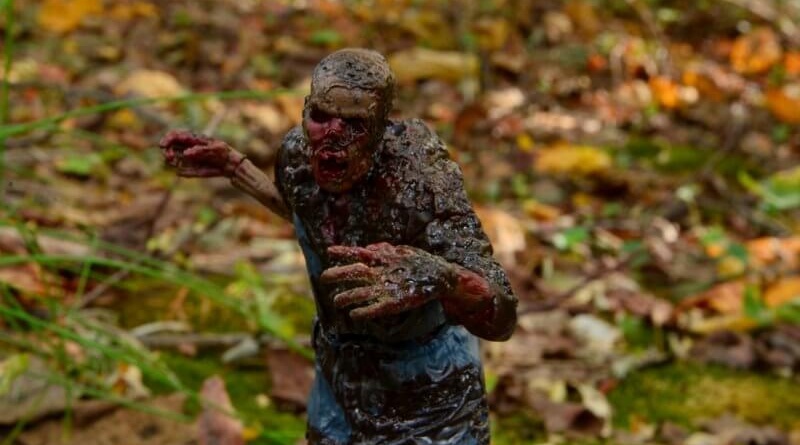 While I’ve recently gotten into McFarlane Toys’ “The Walking Dead” line and amassed a pretty respectable collection since the updated articulation and improved likeness, I hadn’t made my way into buying any walkers.

Series 7 and a great price finally helped me break through and grab a walker. Let’s see if it’ll open the floodgates to army building walkers.

Packaging: While the slender packaging doesn’t dominate shelf space like other lines, I appreciate the streamlined appearance.  The packaging covers most of the essentials clearly indicating this is part of the AMC TV series figure line and this is Series 7.

While I’m not championing walkers need bios on the back, it would be helpful to have a simple sentence saying what’s included instead of the collage image of all the series figures. That’s especially important for this figure’s “action feature.”

Likeness: This is where the MT sculptors can go nuts as there’s no pesky likeness to try and nail down and their only limitation is their imagination. The figure is a nod to the Season 4 walker that took a bite out of The Governor’s surrogate daughter Meghan. While not an exact match, there’s a lot of similarities to that heart wrenching flesh-eater.

It’s hard to tell exactly what fate befell this particular walker as it appears to have gotten burned before its fateful mud bath. Its hair is largely gone and both eyes are gone — complete with a worm slithering out of one eye socket — along with some teeth.

This is a pretty gruesome walker and the mud covering only adds to the horrific visual. The jacket has a hole to the side and its hood is coated in mud. 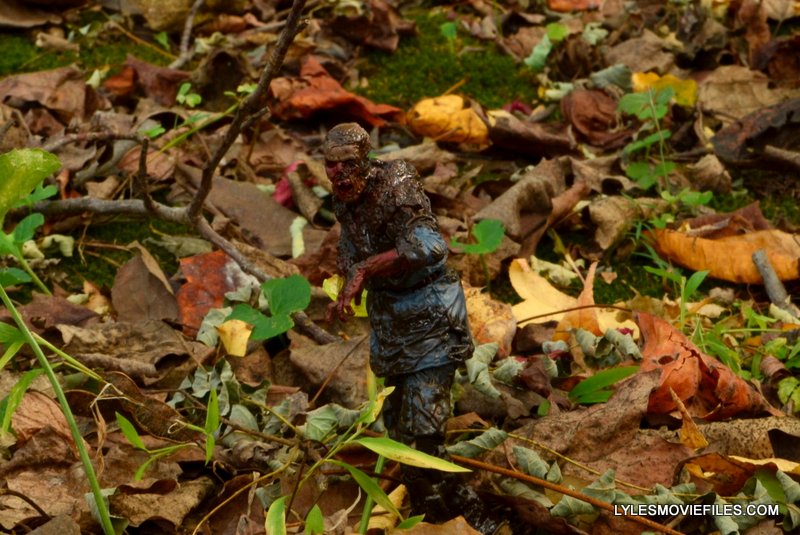 Paint: Here’s where the figure really stands out. Rather than just slathering a bunch of brown paint on the figure and calling it a day, McFarlane Toys’ painters went to town on the paint applications.  The trick was not going overboard with mud as it would diminish all the terrific sculpting. 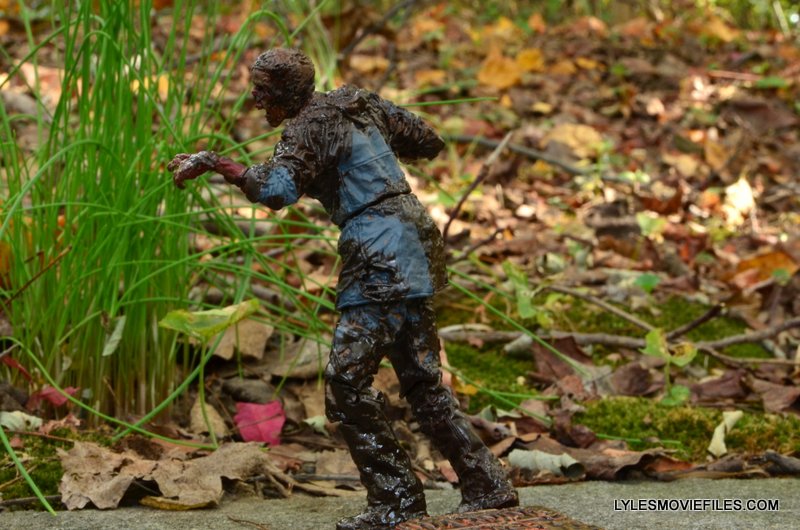 There’s some faint blood seeping through the skin and varying levels of dirt and mud throughout the figure, with the largest concentration fittingly around the legs.

Scale: Scale is largely irrelevant for the walkers so long as they’re not too short or too tall compared to the human character figures. MW is fine on that front so no worries about him looking out of place.

Articulation: Surprisingly, the MW has a decent amount of articulation whether you’ll find it useful is another thing. 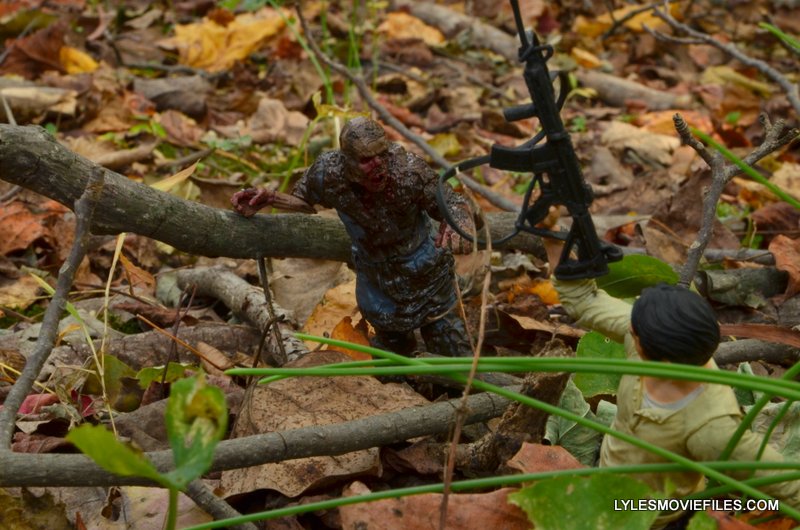 It’s got a swivel neck, cut shoulders, upper arm, wrist, waist, hips and hinge knee articulation. Despite the articulation points, it looks best in the “resting” position it’s packaged in.

Overall, the figure would be even better if it didn’t require the base to stand and the two pegs at the bottom of the feet eliminate other obvious vertical posing options. 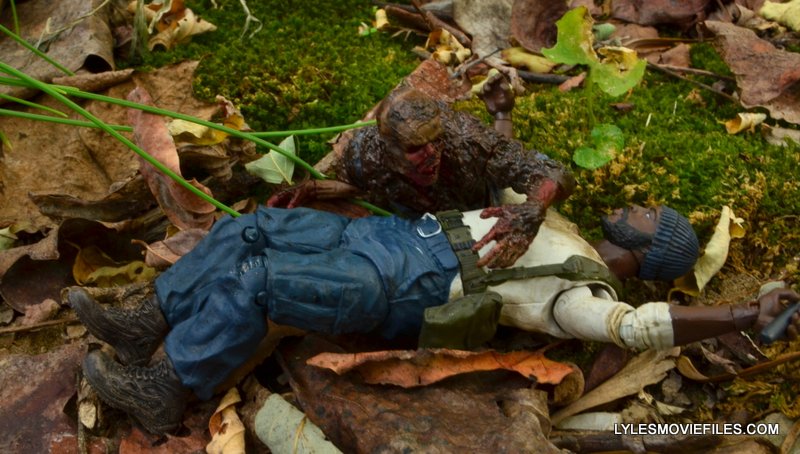 On the bright side, and one bizarrely you may not necessarily figure out from the package, you can split the walker in half and place it on the base separately. It’s the kind of thing the package really should indicate as it’s a terrific selling point.

Accessories:  Although it’s pretty essential if you plan to display MW standing, it comes with a muddy base with a sign warning of the flash flood area. The sign looks excellent and actually looks like a mud-covered sign.

Worth it? At $15, this line is sadly the going rate for the 3 3/4″ – 5″ scale. It certainly helps TWD’s cause when the Marvel Universe figures that are smaller and have less paint apps and accessories are the same price. I stumbled onto this at a Gamestop clearance rack for $5, which is a terrific — if unreasonable — price point for nondescript army builders. 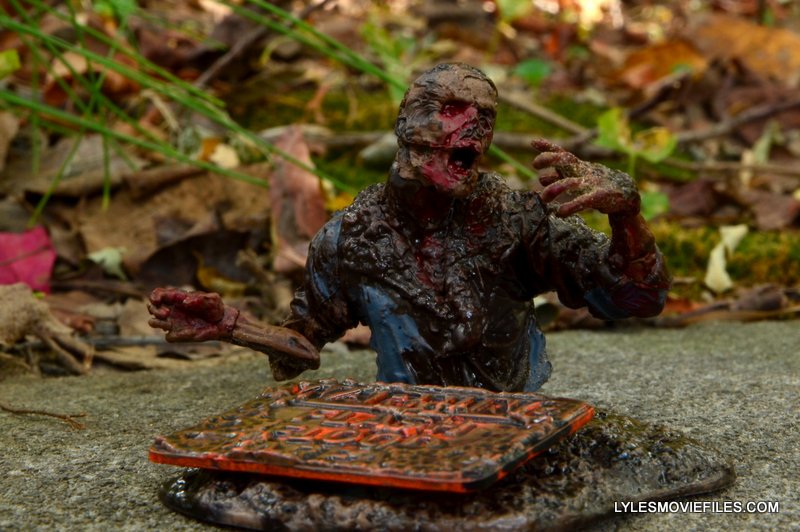 If it could stand without the base, I’d have gone higher, but the separation option gives you at least two posing options. It’s a bit too scene-specific to warrant army building these guys, but three or four would make a nice diorama especially since the price is right for them. 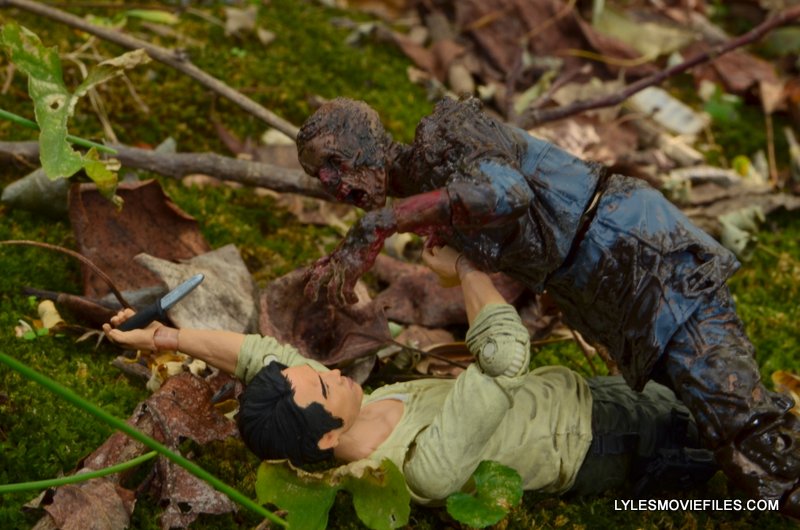 Where to get it? I grabbed the figure at Gamestop, but Lyles Movie Files partner Amazon.com has a great deal on them for $8. That’s the ideal sweet spot for this walker variant and for that price, I’d definitely recommend it: McFarlane Toys The Walking Dead TV Series 7 Mud Walker Action Figure

Or if you want to get the whole series, which isn’t a bad option considering the fan favorites included in the set, order the whole set:
Order The Walking Dead TV Series 8 Action Figure Set from Entertainment Earth!