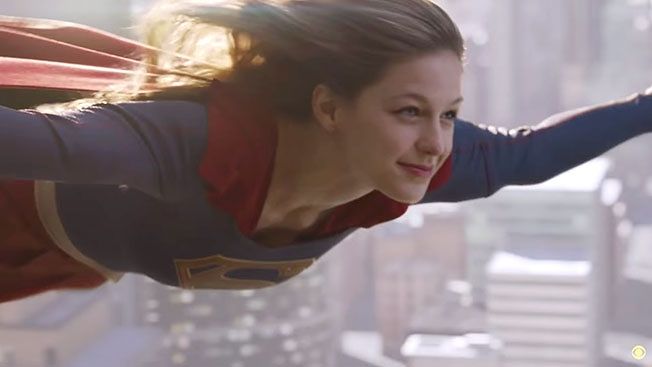 I feel like you don’t even believe in me.

That was an telling line from Supergirl this week that could have easily been directed at the writers who continually make her out to be Superman’s lame cousin.

“Supergirl” is going to ultimately succeed by carving out a unique superhero presence on TV, not constantly reminding audiences who she’s not. Compared to Superman, every other hero fails to fully match up anyway.

Arrow didn’t spend his debut season focused on not being as good as Batman and besides one challenging moment, The Flash didn’t waste a lot of time considering how to be as good a hero as Arrow.

Supergirl and her inner circle, however, can’t stop the Superman comparisons. I love Melissa Benoist’s earnestly optimistic take on Supergirl, but I already hate the constant implications she’s somehow not good enough.

Viewers don’t need the weekly validation sessions that “hey, Supergirl is actually competent enough to get the job done!” We get it, now it’s well past time for the writers to trust in their hero and stop worrying about her family connections.

Tonight Kara faced off with Reactron, a Superman villain who blames Superman for the accidental death of his wife. Reactron’s comic costume got washed out in the drab TV villain wash so his outfit looks more a cheap collection of junk scrapped together.

The big story was Reactron is so powerful that he’s nearly killed Superman, who never managed to actually beat him. That was a major problem with the episode as the key to beating Reactron — his light-up chest sensor channeled his nuclear blast before he fired — was a pretty obvious Achilles heel. Superman may be the big blue Boy Scout, but he’s also smarter than a fifth-grader.

In their first encounter, Supergirl forces Reactron to retreat after damaging his chest panel. Supergirl letting this threat fly away made little sense though as clearly he’s going to remain a problem.

In need of repair, Reactron kidnaps Maxwell Lord — essentially playing a jerky version of Tony Stark — before Supergirl comes to save the day. This time, Supergirl doesn’t use the already established “boss pattern” and is nearly killed when Superman arrives to save her. We see Superman through Kara’s fading perspective so we don’t really get a good glimpse.

I had a lot of issues with this rescue. James called Superman in out of genuine concern and Kara calls him out on it saying no one will take her seriously if Superman always has to bail her out. But was he really wrong considering his far more experienced superhero ally almost got killed? And Kara clearly was going to get killed if Superman hadn’t arrived so it’s hard to knock James’ decision.

Continuing the poor underdog Supergirl portrayal, Maxwell Lord thanks Superman in a news broadcast for rescuing him. Thankfully Team Supergirl DEO version is able to come up with a way for Kara to beat Reactron.  Again, both Supergirl and Superman look like goofs for not being able to figure that one out.

The fight scenes again were the episode highlight, which is so impressive to anyone who watched “Smallville” use Superman’s powers in limited doses due to budget restraints.

The Winn/Kara/James love triangle feels so forced. Kara may be overly cheery and a little naive, but Winn’s crush is so apparent she almost seems like she’s leading him on or taking advantage of the poor guy. Also, the casual slip from James giving up Superman’s secret identity around Winn didn’t exactly support his statement to Alex that he’s good about keeping a secret. And Lucy Lane (Jenna Dewan Tatum) shows up to make this love triangle a square.

I’ve given her three weeks, but Cat Grant is officially my least favorite character on TV right now. Calista Flockhart is fine in the role, but Cat is such a perpetually one-note nasty character that  she’s easily the worst part of the show.

I don’t care about her writing block in crafting the exclusive Supergirl interview, which Cat more or less pissed away by being so “over” Krypton heroes and their backstory. And for all her feminist stance, Cat asking Supergirl if she’s going to start a family was silly. But Cat did get confirmation that Supergirl and Superman are cousins.

Cat is a passive antagonist character and that go-to boss trope feels so dated for a show that aspires to stand out from its peers.

Since the show definitely will be playing this whole Henshaw is the evil force no one knows about for awhile, the constant reminders he’s likely up to no good is going to get old quickly.

I did appreciate Clark just hitting Kara up via chat to show that while he may be busy saving the world, Superman at least has enough time to check in on his family.

Best moment of the night? Kara and Alex sitting on the couch eating take-out, which really felt like a realistic sisterly moment we never get with comic book movies or shows. That feel good moment got ruined a bit when Alex said Kara’s doing things Superman couldn’t do. The writers really need to stop using Superman as the measuring stick for Supergirl’s career.

This was the first episode that didn’t click and it mainly was a result of the writers’ preoccupation with keeping Supergirl in Superman’s shadow. He doesn’t need to be Kara’s measuring stick as it puts whatever she accomplishes in a limited context.