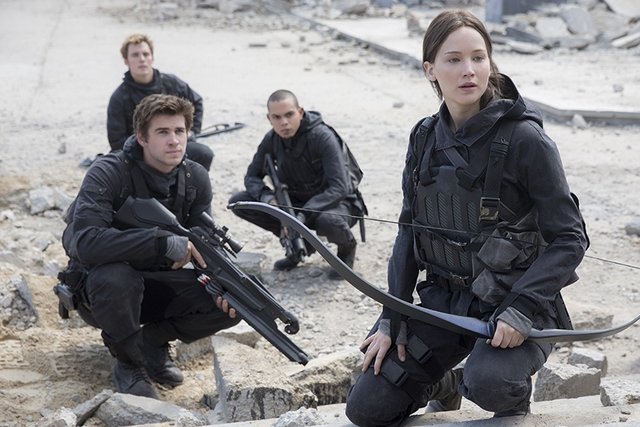 Faring far better than its uneventful first half, The Hunger Games – Mockingjay: Part 2 spectacularly concludes one of the more popular and groundbreaking franchises in cinematic history.

The decision to stretch the final book into two films solely for a cheap cash grab definitely hurt Mockingjay’s first chapter. There were too many moments where nothing happened so often it felt like a film stalling until its better half arrived.

There’s still enough fat that could be trimmed in Part 2 to suggest Mockingjay would have been a vastly superior effort as one film. I’d love to see a streamlined version with the best parts of both films into a two and a half hour package.

Picking up from its predecessor’s surprising cliffhanger, Katniss (Jennifer Lawrence, X-Men: Days of Future Past) is struggling with the revelation that The Capitol brainwashed her lover/friend Peeta (Josh Hutcherson). Now instead of wanting to cuddle up with her, Peta wants to strangle her.  As far as vindictive plots go, this one by President Snow (Donald Sutherland) is particularly nasty.

President Alma Coin (Julianne Moore, Still Alice) continues to assert herself as the leader of the resistance force with the aid of her chief adviser Plutarch Heavensbee (the late Philip Seymour Hoffman in his final role). But she’s beginning to question if Katniss has a place in her future vision of a united Panem.

Unlike many of its contemporaries, The Hunger Games has always been about more than just a love triangle or a carefree action adventure. In adapting Suzanne Collins’ novels, screenwriters Peter Craig and Danny Strong get that the underlined story has always been about the powerful few lording their control and influence over the masses ultimately leading to a war.

It’s why even with Snow’s ultimate defeat there couldn’t fully be a happy ending. The cost of so many lost lives and the irrevocable damage done to the survivors’ psyche won’t ever fully heal proving there are no winners in wars, only survivors. That’s weighty stuff for a series that so proudly triumphed its female protagonist as a hero, before turning her into a propaganda symbol for a movement.

Ultimately, that leads to a bleak, downer of an ending and certainly not the kind of joyous conclusion audiences have come to expect from this type of epic adventures.

After a first act that so neatly summarizes what’s occurred it renders Part 1 unnecessary, Director Francis Lawrence finally gets to bring some good old fashion Hunger Games action to the film.

In easily the most dynamic portion of the two films, Katniss sets out to kill Snow and learns her hated enemy has prepared for her insurgence and littered the Capitol with traps conceived by game designers.

The entire city being a weapon sufficiently raises the stakes from the controlled battlefield of the games. These traps ranging from an oil wave, mines, machine guns and mutts, The Hunger Games’ truly terrifying version of zombies/walkers definitely make this feel like the ultimate battle. Francis Lawrence makes every sequence potentially life threatening and the Aliens homage with the battle against the mutts is definitely one of my favorite action scenes this year.

For all the drama with Peta and Gale, I’m fully Team Finnick as Claflin makes his confident warrior the most entertaining of the three male leads. Considering the crushing tone of the film, it’s nice to have a character that makes you laugh.

The other major distinction for the series has been its across the board outstanding cast. Lawrence fully deserves her attention for making Katniss one of the most endearing heroes of this generation and bringing a warmth, vulnerability and daring to her performance.

But don’t discredit her co-stars who help pull it all together. Sutherland never loses that smug attitude of a cat cornering a canary. Hutcherson and Hemsworth give their Peeta and Gale more meaning than simply waiting on Katniss to choose one of them. And Moore is superb as the shrewd politician always looking for ways to improve her standing with the people.

Much like the endless final act of The Lord of the Rings: Return of the King, Mockingjay has several false finishes, but it really is so hard to say goodbye to such memorable characters and such a fantastic franchise.

See how the movie compares to the book: