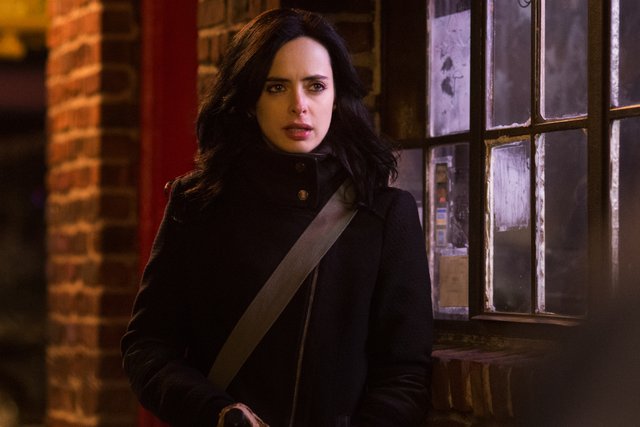 For all those worried if Daredevil was just a one of a kind fluke for Marvel’s Netflix TV venture, by the half hour mark of Jessica Jones the last bit of concern should fade away in a purple haze.

Jessica Jones is a fairly new comic character conceived in 2001 who only had a 28 issue series called Alias. Jessica is a perfect character for a Netflix series as she’s not bogged down with decades and decades of continuity to try to cram in to 13 episodes.

The premiere episode still assumes viewers have a passing knowledge of her backstory though as there’s no early explanation as to the full extent of her powers and why she’s a private investigator instead of battling criminals like her peers.

Having Jones narrate the story works against that standard hero origin setup, which is an interesting decision considering Jessica is such a blank slate character for most of the general populace. Credit screenwriter/series creator Melissa Rosenberg for putting us in the middle of Jessica’s story and filling in the blanks later to add an incentive to get invested in the series.

In Krysten Ritter, the show has another perfectly cast performer that embodies the spirit of the character as well as Robert Downey Jr., Chris Evans, Chris Pratt and Charlie Cox.

Just from the first episode, it feels like Marvel getting Ritter to sign was a major coup that is going to benefit Marvel for having the vision to provide this star-confirming vehicle for the vastly talented Ritter.

It’s not fair to compare a Netflix show with complete freedom to do anything with a network TV series, but it’s hard to miss the stark differences between this and Supergirl.

Unlike the eternally fairy tale princess-like cheery Supergirl, Jessica is a straight up wonderful mess instantly making her more relatable than 99% of superheroes.  She’s cynical, hardened, wakes up every morning with a nearly empty bottle and she does office work while on the toilet. Forget gender, Jessica Jones is a trailblazer for showing us a hero handling their business while doing their business in the bathroom.

Neither is necessarily better than the other, but I’m encouraged and excited at the thought of two wildly different female heroes headlining their own shows.

A kindly couple from Omaha hire Jessica to find their daughter, Hope (Erin Moriarty), but as Jessica delves into the case more she finds worrying connections to a similar experience that left her with severe PTSD.

Director S.J. Clarkson gave the episode a smooth psychological thriller feel with some legitimately creepy jump scares that never felt cheap or overdone. I loved how she kept working in that ominous purple lighting during Jessica’s hallucinations/visions.

Some parts didn’t work as well. Too much time was spent on Jessica’s seemingly not so random hookup with a bar owner (Mike Colter). Beyond showing Jessica isn’t opposed to some steamy hot sex, the segment felt out of place and unnecessary.

Ditto for the scenes focused on Jessica’s occasional employer/power attorney Jeri Hogarth (Carrie Anne Moss) running around on her wife/girlfriend with her co-worker Pam (Susie Abromeit). Granted, that’s a twist from the dude sleeping with secretary angle, but I’m not sure why we’re supposed to care about who Jeri’s sleeping with at this point.

The subtle underlined theme of Jessica literally chasing Hope was never more effectively played out when she visited Trish Walker (Rachael Taylor) for money so she can get out of town. Their past relationship wasn’t explained — Rosenberg left a little too much unsaid with Jessica’s ties with people — but Jessica wanted no parts of a rematch to save Hope.

Unlike Daredevil, Jessica is already well aware of her adversary Kilgrave and in a fascinating departure from the norm, is terrified of the prospects of encountering him again. If the hero is afraid of the villain they must be truly horrifying.

Trish cautions Jessica is far better equipped to handle this villain than a girl from Omaha and reluctantly, Jessica tracks Hope down. Under some strong mind control, Hope doesn’t want to leave the hotel room and Jessica has to forcibly remove her to reunite her with her folks.

As Jessica pauses to enjoy a brief happy ending with one of her cases, she sees Hope smirk at her before pulling out a gun and killing her parents. Despite only being in one episode, the tragic death of Hope’s parents had a lot more impact than I expected. After emptying the gun, Hope relays a message from this evil force before he releases his control and Hope sees her parents dead before her.

Jessica starts to run off and get away, but decides she is going to stop running and re-enters the hotel finally ready to stand up. That moment had the exact intended effect of getting me hyped up to see Jessica confront her past and become the hero she’s been destined to become.

Weak supporting character drama aside, this was a fantastic introduction to Jessica Jones — a character I absolutely can’t wait to binge watch and learn a lot more about.

Read all about Jessica’s comic adventures in this collection from Lyles Movie Files affiliate partner Amazon.com: