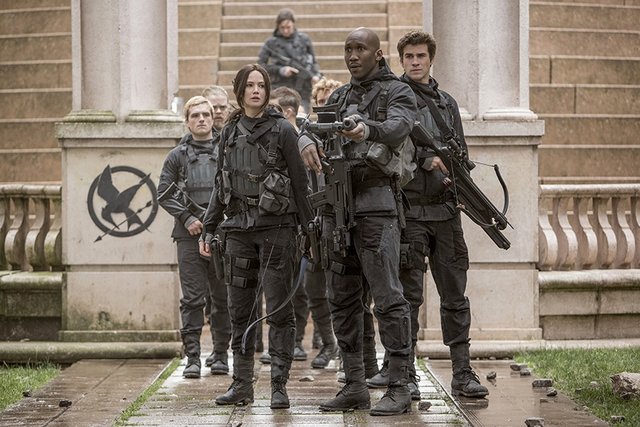 1. The Hunger Games: Mockingjay Part 2 – $101 million [debut week] Katniss once again hit the bullseye to win the box office games, even if her domination wasn’t as thorough as before.

This franchise has gone against the norm for popular book series. The last two films haven’t been able to catch the success of Catching Fire, which opened to a sizzling $158 million en route to a $424 million total gross, good enough for No. 12 on the all-time list.

Mockingjay Part 1 opened to $121.8 million so despite having one of the year’s best openings, this is largely disappointing for distributor Lionsgate. You’ve gotta wonder if the franchise financially and creatively wouldn’t have just been better off not making a two-part finale.

2. Spectre – $ 14.6 million [third week; $151 million in total] – Bond’s stint atop the box office predictably ended after its third week. It should continue to play well through the Thanksgiving weekend as its worldwide gross soars past $670 million.

3. The Peanuts Movie – $12.8 million [3rd week; $98.9 million in total] Enjoying another week without serious family competition, Snoopy, Charlie Brown and company scored an impressive third week tally and should reach $120 million by the end of its run.

4. The Night Before – $10.1 million [debut week] Maybe audiences are starting to tire of Seth Rogen’s drug popping shtick. His latest, was more in line with The Interview (opened at$1.7 million) than The Neighbors ($49M opening). The good news is the film earned an A- CinemaScore so it should play well through the holidays.

5. Secret in Their Eyes – $6.6 million [debut week] Julia Roberts couldn’t drum up enough interest in her latest drama. Perhaps it’s just a matter of folks tired of these ultra serious dramas and are just bracing for the heavy hitters come Oscar season.