Survivor Series 98 may be the greatest episodic ppv ever. You could sit a non-wrestling fan down to watch it and they’d want to know what happens next with Stone Cold, The Corporate Champ and poor Mankind.

Survivor Series 2015 may have the opposite affect and finally make some hardcore fans rethink their devotion to the current WWE product.

Never one to pass up an opportunity to show how truly patriotic they are, WWE kicks off the show with Lilian Garcia singing The National Anthem. It’s hard to take these gestures as anything more than Vince McMahon acting like his life partner Donald Trump proudly proclaiming his Americana.

Remember, tonight is all about a guy who debuted in the WWE 25 years ago and not worrying about the future of the promotion with this WWE title tournament. And WWE wonders why the casual fan can’t get invested in the new crop of stars who continually get ignored when an old star returns for a cameo.

This WWE tournament has been a colossal joke with contenders like Titus O’Neal, Kalisto and Tyler Breeze being in the mix. John Cena and Brock Lesnar just couldn’t find time in their schedules to compete, huh?

I love the old school throwback to the picture in picture promo with Zeb hyping up Del Rio, but of all the guys on the roster that need a mouthpiece it ain’t Del Rio.

Multiple night tournaments only work in March Madness. It loses the impact by having the winner only needing to win two times instead of surviving 3-4 matches. The fans are passively into Del Rio and mixed leaning slightly more to tolerating Reigns. This guy just can’t win with the fanbase at this point no matter how much Vince wishes he could turn him into The Rock, Stone Cold, Brock Lesnar and that guy whose initials are HH.

Both guys work hard, but fan apathy is hard to overcome in this one until the latter stages when both guys get into reverse and counter mode. Reigns picks up the anticlimactic win with a spear.

The effort was definitely there, but this match, much like this tournament has seemed a foregone conclusion from the start.

Jojo interviews Reigns and both Ambrose and Owens come over to inform Reigns they’ll be fighting him next.

I’m amazed Ambrose remains over. He loses every big match and feud, but the fans continue to adore him. And Owens has proven to be a great heel so he works up the fans in an old school way of having a jerk they want to see their hero beat so they’re jacked up for this one. Wrestling booking is amazingly easy.

The crowd response is so animated I almost feel like the WWE botched the tournament by not having this be the final instead of the obvious route with Reigns. 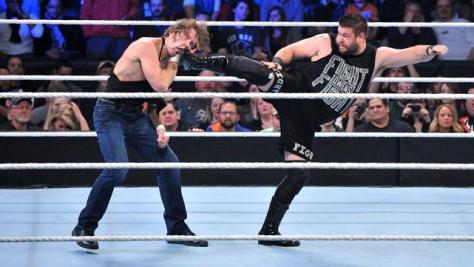 What made Deadly Games so revered was how unpredictable it was right up to the finale. We could have gotten Austin vs Rock, Mankind vs The Undertaker, Ken Shamrock vs Austin, Austin vs Kane. From the moment these brackets were revealed, we seemed destined for a Reigns vs Ambrose finals.

Benefiting from the bigger match feel, these two easily had the match of the night. If the WWE writers were more competent, I could easily see this rivalry lasting to Wrestlemania. In a crisp counter sequence, Ambrose escapes the pop-up powerbomb and hits Dirty Deeds to advance.

I’ll need to see this feud continue please. From mic work to ring work, this could be a great series if done correctly.

If you’re keeping track at home, both the United States and the Intercontinental champion were defeated in the semifinals. Of all the guys who should have been protected and in filler timekiller matches, it should have been Owens and Del Rio.

Eden Stiles is so the truth. That is all.

New Day is clearly incapable of being like most of their peers. I’m not sure if it’s unicorn magic or what, but their charisma is being allowed to shine and there’s no one on the roster close to matching it. The modern day is a magical place whenever New Day gets to rock. And Xavier’s Little Richard inspired hairstyle? Definitely not booty.

While King Barrett is happily chanting and dancing along — and being darned entertaining no less — Sheamus interrupts to tell their opponents they’ll be getting jiggy with it. Vince McMahon still thinks people say “jiggy.” True story. Probably. Sheamus’ team looks at him like he’s a goof (this would be important later).

Remember when Survivor Series was used to signal the arrival of the next big superstar? The guy who would go on a major elimination run or just straight up dominant the opposing team. Guys like Bret Hart, Ahmed Johnson, The Undertaker, Randy Orton. Now it’s just a thrown together match with no purpose.

After Barrett, an Uso and Sin Cara get eliminated, Big E gets beat down and pinned. This prompts the rest of the New Day and all traces of crowd excitement to abruptly ditch the match. That spunky babyface Sheamus valiantly fights back against overwhelming odds, but in the end, the numbers game finally does him in and the sole survivors are Kalisto, the other Uso and Ryback.

Solely for New Day’s antics and Barrett being a good sport and embracing the magic. Once they got eliminated/left, the match got 100% less interesting.

I’m not certain, but I figure most folks wouldn’t casually start wrestling someone who made a crack about their dead brother. Further proof WWE writers don’t understand logic, let alone wrestling. 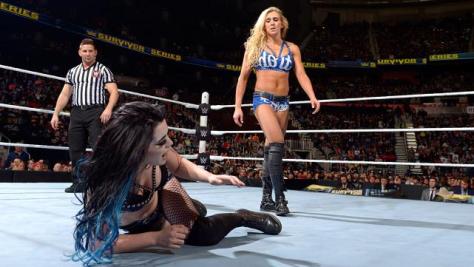 Charlotte and Paige’s hair extensions really distracted me for some reason and I suppose this heated Divas rivalry wasn’t doing much if I could be bothered to notice their hair. Further proof the Divas Revolution is DOA? No other members of this big radical movement managed to get featured on the show, which the crowd was clearly displeased with as they unleashed a Sasha Banks chant.

Eventually, they get into a solid flow mid-match when Charlotte gets the upper hand and starts acting like she hates Paige busting out some mean looking leg scissor head smashes. The action spills outside and Paige stands on the ring barrier for an eternity to set up a safety first, visual second spear from Charlotte. From there, Charlotte hits the figure eight for the submission win.

This match needed to be more than the typical Divas match-up as it had been built far more personal. The lack of selling the animosity made this yet another Divas match that no one will remember two weeks from now.

From Fandango, The Miz, Mizdow, Rusev, Dolph Ziggler and now Prince Pretty, Summer Rae sure has been a passed around valet. At least Breeze makes a sensible partner for her, but you know the writers won’t keep them together long enough for anyone to care.  Ziggler’s 80s rock band look is … interesting.

Breeze works on Ziggler’s leg, which Ziggler sells about half the time. Fortunately, when Breeze kicks the leg out from under his leg (RIP Owen), Ziggler remembers to sell it long enough for Breeze to get the win with the Unprettier.

Remember last year when Dolph got big heroic win for Team Cena that ended the tyranny of The Authority? That was a whole year ago, no true WWE fan remembers anything from a few RAW segments ago.

Just imagine how much more meaningful this match would have been so much better if Bray hadn’t already lost to Undertaker at this year’s WrestleMania or ever actually won a feud. WWE badly needs good heels and Bray should be right atop the list. Instead, he always comes out on the losing end in these wars and can’t beat any of the big guys when it matters. Does anything think he and his fellow loser cronies has any shot at beating the Part-Time Taker and his lil bro? 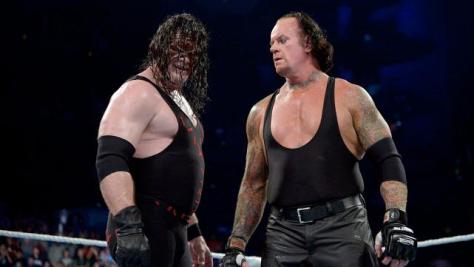 Didn’t think so. JBL seems fascinated when Wyatt does his spider walk as the Brothers of Destruction do their synchronized double sit bit, completely forgetting we just saw that at Mania. After a double choke slam, Harper gets the pleasure of eating the tombstone to take loss No. 4,267 for the Wyatts.

Beyond an admittedly cool Undertaker entrance, this match may as well have been on Wrestling Challenge as the BOD made the Wyatts look like a couple of enhancement talent. It’s why no one takes the threat of the Wyatts seriously anymore. Anyone that thought offering up the Wyatts for The Undertaker’s farewell tour was best for business needs to reconsider the business.

There was definitely a little feel of the Ultimate Challenge here. Provided neither the Ultimate Warrior or Hulk Hogan were dominant champions and no one was certain who would win. But yeah, definitely like that…kinda. 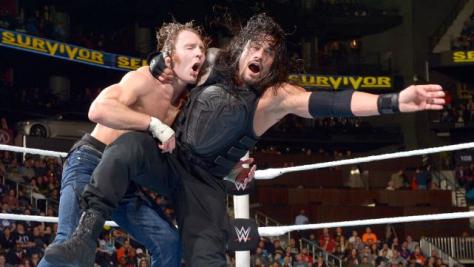 Had to appreciate both guys acting like winning the title meant something and going after each other in a way that showed that could shelve the friendship because being the champ matters. We were in the midst of a nice clash of titans encounter when they abruptly start wrapping it up despite having plenty of time left on the show.

Reigns hits a spear out of nowhere to finally win his long awaited WWE title. It was so sudden and matter of fact that the fans seemed surprised that for all the build to the tournament that it ended in such non-WWE spectacle fashion.

Amidst a sea of confetti — clearly Vince got a good deal on it — Triple H comes out to congratulate the new champ. In a move that didn’t really seem justified, Reigns spears Triple H and celebrates long enough to get hit by a Brogue Kick. Sheamus is cashing in! The first one doesn’t get the pin, but a second, keeps Reigns down and Sheamus — that goofy jiggy getting with it fella — is now the WWE champion. 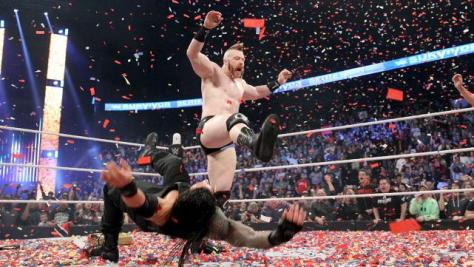 I need a job on WWE creative if suggesting literally rerunning Daniel Bryan’s path to the world title at Wrestlemania 30 somehow got the green light. All the core elements are there. A Triple H crony who didn’t need the Money In the Bank briefcase anyway cashes in against a bearded hero enjoying his breakout moment. I have a sneaky suspicion the Royal Rumble won’t be occupied if Reigns isn’t entered to compete. 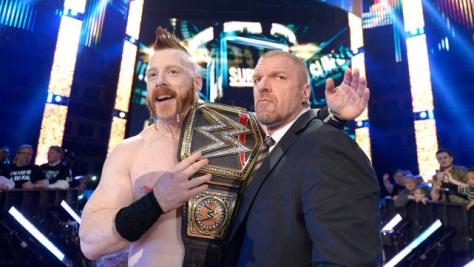 Horn tooting time. I fantasy booked Survivor Series in the traditional way most world title tournaments are handled — with an eye to the future and putting the final touches on a superstar. Think Macho Man at Wrestlemania IV. The Rock at Deadly Games.

Tournaments aren’t intended to put the belts on the same old guys. And Survivor Series 2015 failed on all counts to create a must-see moment for Monday beyond trying to figure out how Reigns will get screwed out of his title shot next.