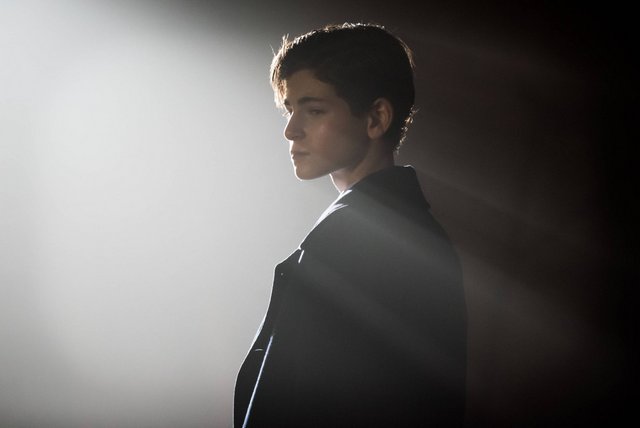 Too often Gotham feels like it’s a show about Batman’s Rogues, then Gordon and Bruce gets the scraps of weak plots designed to keep him in a holding pattern until he eventually becomes the man who will be Batman.

This week we got some great progression and insight into a potentially major life lesson that influences’ adult Bruce’s desire to keep all women at a distance. Except Selina. The episode was really onto something when it made the young Bruce and Selina dynamic click.

Bruce tells Selina he’s going to force Silver’s hand in revealing his parents’ killer in a way she won’t see coming. With Selina observing overhead from a tree, Bruce steps up his sweet nothing game and tells Silver how much he trusts her, blah blah before giving her a kiss.

This was the most aggressive we’ve seen Bruce around a girl and you can almost see the coldness forming around his heart. While walking to class, Silver is abducted and the goons force Bruce to get in the van as well.

The lead goon (Tommy Flanagan, Sin City) says Theo’s prodding into the Wayne murderer is bad for his business and wants Silver and Bruce to spill what they know before he starts slicing off fingers. With both insisting they don’t know anything, the thug drags Bruce to another room despite Silver’s frantic pleading.

It’s not until the thug turns the knife to Silver does she give up a name – M. Malone; but as he prods for more information Silver drops her Barbie doll act and threatens to have her uncle kill him. At that, Bruce and Selina enter the room in a great moment and pay Selina’s friend for playing interrogator. Last season was the mob year, but this scene was most reminiscent of something you’d see in The Godfather.

I’ve just been going along with David Mazouz as Bruce Wayne since he was cast, but this was the first time I could actually see his take on Bruce Wayne becoming the emotionally shut off Batman. Recalling Selina’s words about a liar needing to be able to tell the truth, Bruce says all the things he said to Silver were true — he was just talking about someone else.

A cat may have gotten Selina’s tongue as she was speechless and her cocky demeanor was melting away. This role reversal on their typical exchanges was beautifully handled and marked a turning point in their relationship. I’m looking forward to see where these two crazy kids end up next.

With Bruce “kidnapped,” Alfred resumed his role of the most tail-kicking butler going straight to Galavan’s penthouse looking for his ward. Tabitha’s the only one there and this confrontation between two emotionally charged hot heads plays out better than expected. We get a terrific throw down with whips, knives, daggers and guns. Alfred takes a dagger swipe to the side and escapes via a passing garbage truck, but not before Tabitha tosses a knife in his shoulder. Let’s call it a draw.

After all the buildup to unite them, I’ve been a bit bummed we haven’t seen enough of Nygma and Penguin. Nygma’s back at work telling Lee that Kristin ran off with Daugherty while fielding calls from Penguin asking about the plunger and spicy mustard.

With Bruce getting all the great attention, Gordon’s subplot held up just fine as well. Gordon was worried Galavan was somehow going to pull a fast one and get out of prison. I appreciated his proactive approach since we’ve already seen the star witness, former Mayor James, wasn’t the most morally upright character in the city. Gordon sets out to find Penguin’s mother’s body as he can tie that to Galavan to ensure he stays in prison.

Striking out on that front, he and Bullock investigate a lead on a series of seemingly random murders and a group of monks we learn are The Order of St. Dumas. This is the same group that will eventually train Batman’s rival/ally Azreal and one of the groups that makes sense to tackle and address their backstory.

Gordon and Bullock track one monk down to a massage parlor before he kills himself instead of giving Gordon any information on their agenda. They encounter another in the sewers, but this time, Gordon’s able to trick him into giving up the vague Order agenda of preparing to kill Gotham’s son.

My least favorite moment of the episode was the predictable courtroom scene where Mayor James switches his story and blames Penguin. Blaming everything on Penguin again seems like a needless backtrack since the show’s already done a manhunt for Penguin episode already. Galavan gets off and Gordon reveals he’s learned nothing about playing Gotham politics by slugging Galavan after he makes a showy statement about forgiving the GCPD.

Instead of cops escorting Gordon out, it’s a pair of Galavan’s bruisers who knock him out and tie him up for their boss. Galavan has some business, but does the evil villain monologue bit revealing the Dumas family was run out of Gotham and he’s here for payback. This is a serious grudge the Dumas have been keeping and I’m still hazy on how killing Bruce marks their end game.

Galavan gives Gordon the chance to take him down and promptly whoops GCPD tail. In fairness, Theo didn’t exactly look like a champion MMA fighter, but he makes Gordon look like every other Gotham police officer.

I was glad Gordon being chained and facing certain death wasn’t left as a cliffhanger since we know Gordon’s definitely getting out of this situation just fine. His rescuer was much more interesting anyway. Penguin killed Galavan’s men and wants to know where Galavan is hiding.

The answer is Wayne Manor. Bruce is reading up on his files when Galavan walks in brandishing a knife. No need to play cute any longer. Bruce better hope that garbage truck makes a detour at the mansion.

Heading to the winter finale, Gotham has gotten into a nice groove with the villains fully revealed and Bruce taking an important step to manhood.