Hope Shlottman is going to have to come up with an immediate cure for cancer, end poverty, eliminate obesity and solve the national debt crisis to justify her importance.

Jessica’s refusal to cut her losses with Hope in order to stop Kilgrave permanently were never more evident in this episode. At this point too many characters have been killed for her expense and Jessica’s stubborn refusal to see that made for the most frustrating episode yet.

Initially when we were introduced to Jessica she’s quickly revealed as a cynical, hard-drinking, beaten-down individual. Jessica’s private eye job largely consisting of photographing cheating spouses fit her aimless, purposeless life. She wasn’t this crusader for justice willing to battle against impossible odds and using her abilities to help anyone.

Most importantly, Jessica was portrayed as a realist and not someone devoted to a (pardon the pun) hopeless cause. It’s why this clear Hope storyline hasn’t rang all that true. Hope spending decades in prison is terrible, but a friendly neighbor, a nosy neighbor and a regretful parent have been killed in subsequent episodes for Jessica’s crusade.

With Kilgrave imprisoned and four more episodes to go you knew there was going to be some screwy events to help him bust out. Fortunately, the writers avoided the obvious move and have Hogarth spring him and trust that he’d use his abilities to force Wendy into agreeing to the divorce. Not that it wasn’t about to happen, but that would be a pretty stupid way for the main villain to cause even greater mayhem.

After Hogarth presented Hope with a plea deal, Jessica was racing against the clock to drum up a confession. Rigging Kilgrave’s prison with water and a mild electric shock was a nice touch, but her plan to get a taped confession was never going to work. Jessica has frequently been making boneheaded decisions.

Logic aside, the exchanges with Jessica and Kilgrave were as always tremendous. Jessica taunting Kilgrave using his name Kevin and mocking his on the nose new identity were standouts.

And to answer the previous episode’s cliffhanger, Simpson is alive thanks to Trish’s timely arrival and efforts to get him to a hospital. There, he reunites with some clearly up to no good doctor, who provides some special happy pills. Simpson is used to the regiment and wants the red pill. Sadly he does not awaken in The Matrix, but now it seems certain Simpson is becoming the MCU version of Nuke.

Thanks to some amazing P.I. work, which the show had gotten away from lately, Jessica is able to track down Kilgrave’s parents. Way too conveniently, they’re in Hell’s Kitchen, with the mother attending the Kilgrave support group.

One of the show’s super powers is navigating these eye-rolling moments thanks to the quality of the performances. Jessica lays into Kilgrave’s parents before they reveal he had a disease that would have killed him by 12 and after developing his powers, he kept them under his control for years before they fled to get away from him.

With all the players assembled at Kilgrave’s cell including his parents and Det. Clemons to serve as a witness, Jessica let them enter the cell. It’s beyond Jessica’s plan being ridiculously dangerous, but questionable writing for her to put innocents in this vulnerable position.

So a lot of the shock factor of Kilgrave’s mom trying to stab him — in the shoulder instead of the more fatal throat or head was another issue — only for him to force her to stab herself felt predictable. The fail safe of course didn’t work and Trish freaked out by shooting the glass paving the way for Kilgrave’s escape.

Jessica grabs Kilgrave, but his commands don’t work so a controlled Clemons has to hold her long enough for him to escape. The show has kept Jessica’s powers purposely vague, but she should be able to easily stop Clemons before Kilgrave vanishes. 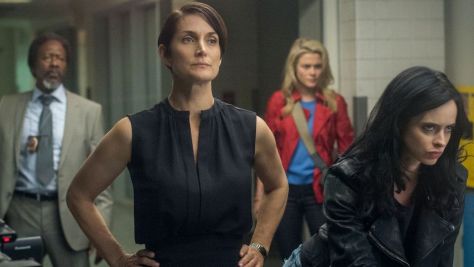 Jessica recalls the other instance where Kilgrave’s powers didn’t work on her after she was forced to kill Cage’s wife. I’m interested in discovering if it’s the violent act that broke his control or simply Kilgrave yelling and his powers are somehow tied to his emotional state.

This has been hailed as the signature episode of the season, but too many plot conveniences, questionable character actions and some moments that felt more like padding than worthwhile contributions to the story made this my least favorite so far.

I suspect this was another that would benefit from being watched in binge fashion than spread out as you can quickly move on to the next episode without thinking too closely about the specifics of these events.