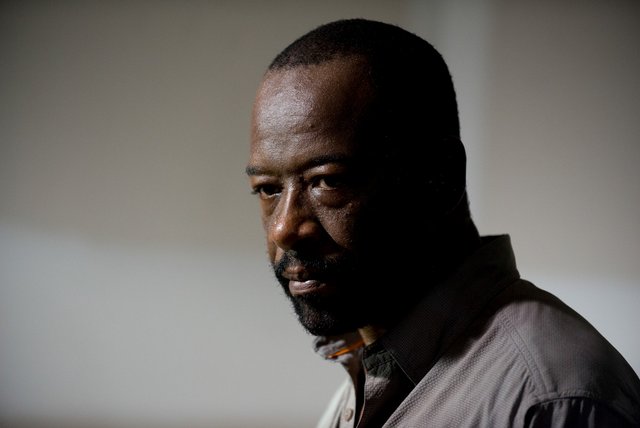 Any disappointment with tonight’s fall finale was strictly my fault for expecting this dynamic cliffhanger to have me anxiously counting down the weeks until its return.

After last week’s terrific setup with the walls of Alexandria tumbling down and the walkers surging into the sanctuary I envisioned something more.

Walkers were closing in on Rick, but Deanna of all people makes the save though not without consequence. Alexandria’s going to be holding elections as Deanna got bit. I was bummed about this as Deanna had been dealt a pretty crummy hand since Rick arrived with her husband and son getting killed.

Yet of all the Alexandrians, Deanna was the one with the most storytelling potential to see how she would bounce back. Instead, she gets a nice farewell moment opting to shoot a few more walkers as opposed to using the bullet on herself.

As the walker invasion continued, everyone split up to various houses. Jessie leads Rick, Carl, Gabriel, Deanna, Ron and Michonne back to her place where Judith is ready for a bottle and Sam is ready for his peanut butter sandwich lunch with the crust cut off please. The only positive about Sam at this point is he hasn’t managed to get anyone killed…yet.

His brother, Ron, is trying hard to follow in his father’s footsteps by attempting to kill Carl but drawing more walker attention to the house. Carl has less tact than his father telling Ron his dad was an a$$hole. I get that Carl is a teen, but he couldn’t be handling Ron any worse and is almost daring Ron to shoot him.

I really need Rick and company to start perfecting spear making. Sure it would be tedious and take forever, but getting on rooftops and slowly killing off the walkers would eventually clear the city.

Elsewhere, Eugene, Rosita and Tara are holed up in a garage while Carol and Morgan are in the house he’s got the Wolves’ leader stashed under Denise’s watch.

Morgan’s insistence on keeping the Wolves leader alive predictably went wrong the moment he was engaging Carol in a philosophical debate/fight. I appreciate the effort trying to explain Morgan’s compassion, but hurting Carol to save this murdering psycho especially with walkers all around them was stupid.

With Morgan distracted, the Wolf knocked him out and held Denise at knife-point as Rosita, Eugene and Tara emerged from the garage. Hoping against logic, the trio kick their guns and machete to the Wolf, who surprisingly doesn’t just kill them all for their stupidity. The Wolf leads Denise outside with him where he’s sure to use her as bait to get away.

Beyond the wall, Glenn and Enid watch the walkers surge in and Glenn gets enough of a vantage point to see Maggie atop the watch station. No happy reunion tonight.

Rick and crew meanwhile slather walker guts to move past the walkers. And it’s Sam, not baby Judith, that starts freaking out about walking among the dead as the underwhelming episode fades to black.

Not that I needed some major bloodbath, but this finale needed way more than the characters barricaded yet again. The Alexandrians finally fighting to save their city alongside the Grimes Gang, the Wolves returning at the most inopportune moment or Daryl, Sasha and Abraham playing the cavalry would have helped make this episode payoff the first half events.

Instead, nothing of any real significance occurred beyond Deanna’s death and Morgan proving his compassion is a major liability.  This season has stalled significantly following Glenn’s death and Morgans Zen Warrior origin episode and this fall finale was indicative of a season that’s starting to lose its way.

The midseason finale had way too much potential to deliver such an underwhelming and limp cliffhanger.