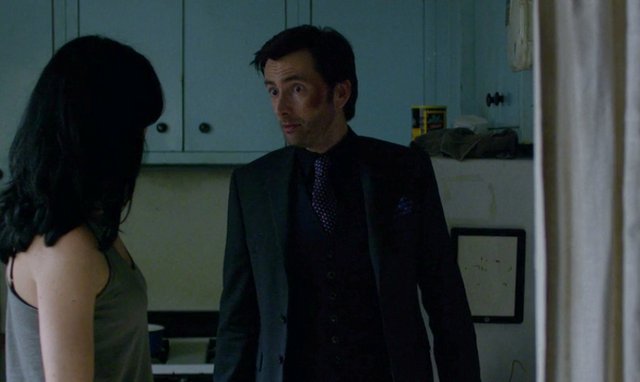 Pretty much everything that could go wrong did this week in a punch to the gut episode that unraveled all of Jessica’s hopeful plans while significantly adding to the body count.

This was a heavy episode that suffered from a few stupid moments and frustrating character decisions.

As was strongly hinted last episode, Jeri sabotaged the fail safe device wiring, which set in motion Kilgrave’s escape. Bleeding out from the shoulder wound, Kilgrave commands her to take him to a doctor she trusts, which means Wendy gets a visitor.

Kilgrave and Wendy strangely bond over their failed relationships while Jeri reveals she kept Hope’s fetus, but they couldn’t find a way to harness Kilgrave’s power. I’m curious who this medical staff was and if we’ll see more of them later.

Bandaged up, Kilgrave commands Wendy to get some payback with 1,000 cuts on Jeri. Beyond being a cheater and kind of a jerk, Jeri hasn’t been an especially terrible character, yet this would be one death I was fine occurring.

Just as Wendy is getting warmed up with slicing, Pam arrives and sends Wendy to the glass end table permanently ending Jeri’s messy divorce issues. Of the three characters in that never-ending subplot, Wendy was my last one I wanted to see killed, but her death was fitting for the darker tone of the series.

Continuing his path to nutjob status, Simpson arrived at the safehouse where Kilgrave was held. After Clemons informs him of the potential Kilgrave cure being worked on by Papa Kilgrave, Simpson kills him and ignites the safehouse with the video evidence of Kilgrave’s power.

All along I couldn’t see a way Kilgrave could be brought to trial and incarcerated and destroying the evidence pretty much nailed shut the last possible bit of hope on that front.

Jessica didn’t necessarily have to agree with that solution, but the writers needed to give her a plan that had a better chance of succeeding or at least being adaptable enough to try something else instead of stubbornly butting her head against the wall to save Hope.

Jessica doesn’t have to search long for Kilgrave as he pops up in her office proposing a trade. Hope, whose release he’s secured, for his father. I wish Kilgrave’s hatred for his parents had been better developed as it felt odd for Kilgrave to so drastically drop his Jessica obsession in order to get payback on his father. Not one to negotiate, Jessica knocked him out and duct taped his mouth shut while Kilgrave’s father completed the vaccine.

Robyn turning most of the Kilgrave support group against Jessica was silly. She’s a Pixar villain wandering into Marvel’s darkest live-action material and feels totally out of place. Why the guy who lost his jacket would feel the need to keep coming to these meetings is bizarre too.

I’m still hazy on Jessica’s powers as Robyn hitting her with a plank was enough to knock her out. Naturally she frees Kilgrave and for a change, I’m happily anticipating what evil plan he had in store.

Disappointingly Kilgrave just has her, Malcolm and the two support group guys as hostages for his meeting with Jessica to exchange Hope for his father. Tired of being a victim, Hope forces Kilgrave’s hand by stabbing herself in the throat and finally freeing herself from the threat of Kilgrave and releasing Jessica from any moral obligation.

I’m torn whether this was brilliant writing or a continued exercise in frustration. Had Jessica simply killed Kilgrave earlier at least his mother, Wendy, Clemons, Simpson’s two pals, Jessica’s nosy childhood neighbor and Hope would have still been alive. Simpson was right all along and Jessica’s ill-advised plan led to deaths that could have been prevented.

People gripe about Superman killing Zod in Man of Steel all the time, but to me Superman would have looked far worse allowing Zod to incinerate that innocent family for the sake of being a hero.

Too much of the second half of the season has left Jessica being more of Kilgrave’s accomplice than adversary to the show’s detriment. Now having her shift strategies and agree to finally kill Kilgrave seems far too little too late.

With three more episodes to go I’m really hoping the series can rebound and position Jessica more as the smart, wily character she was originally.

I’m still engaged and Jessica taking the path she needed to be on five episodes ago has me encouraged the show is going to turn things around heading to the home stretch.