My only disappointment with this week’s show was that it wasn’t the winter finale. So much happened in this installment that following it up so quickly may diminish the major events that occurred.

For starters, Ward somehow managed to make his blood feud with SHIELD even more personal by assassinating Rosalind just as she and Coulson were enjoying a candlelight burger dinner.

It was an especially cruel move from Ward that had little to do with the overall HYDRA remnants plan of going through the portal to get the super Inhuman. This was all about payback for the death of Kara and calling Coulson to gloat was an immensely dickish move. 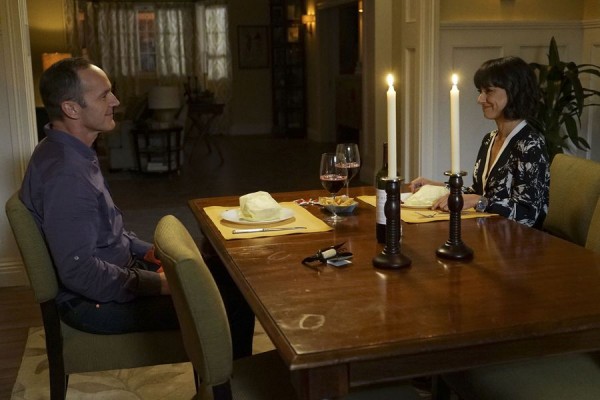 On one hand, I hated seeing the end of Rosalind, a character who was allowing us to see a different side of Coulson, but this immediately re-established that no major supporting characters are safe. This felt important after the fake out with Andrew’s “death.”

It’s felt like forever since Coulson was actually in some jeopardy so it was great seeing him fight off Ward’s goons. Foreshadowing later events in the episode, it was telling that Coulson called Mack to rescue him and not May or Daisy.

I’ve been holding onto a grudge against the show ever since Trip’s meaningless death, but the writers mostly squared things for me with the emergence of Mack as a major player this season. That ascent was strongly confirmed tonight as Coulson named Mack the SHIELD interim director while he went after Ward. After all the positioning of Daisy as a leader, this was an actual twist I didn’t see coming, but I really like the move.

After getting a very personal briefing from the original team members, Coulson took Bobbi and Hunter with him on this manhunt. I could see leaving Daisy behind due to her “it’s complicated” status with Ward, but May is cold and detached enough that her emotions wouldn’t get the better of her so I was surprised he left her behind.

Going personal himself, Coulson tracks down Ward’s younger brother, Thomas, and threatens to kill him to draw Ward out. Bobbi suggests another plan and has Thomas speak to Ward long enough to get a trace on the Hydra location.

Ward and Gideon Malick hadn’t been sitting back though, dispatching their bada$$ metal controlling Inhuman Mr. Giyera (Mark Dacascos) to kill Banks and capture Fitz and Simmons. I got a major Empire Strikes Back vibe as Ward tortured Fitz and Simmons until Fitz agrees to go into the portal to spare Simmons.

Ward is slowly starting to become a problem for the writers. He’s such an amazing villain and he’s got a personal stake with all of the original team now beyond his betrayal that he’s getting close to overshadowing any other villainous plot. Who cares about an Inhuman portal when even Coulson is on a Ward must dieeeeee kick? He’s such an outstanding bastard I find myself rooting for Ward to not get killed so he can keep making trouble for SHIELD.

Mack was uneasy about assuming command even with May’s surprising ready acceptance. It takes Coulson heading to Hydra’s base on an apparent suicide mission for him to step up in a big way by officially bringing Joey and Lincoln onto the team. Mack’s speech was darned impressive and the fist bump with Daisy was a great moment.

Malick convinces Ward to lead the Hydra battalion through the portal. While I’d be just as reluctant as Ward, Powers Boothe’s silky commanding voice could probably have me rooting for the Patriots. But before Hydra can close it, Coulson dive bombs into it.

I really hoped Hunter followed Coulson into the portal as the Hunter/Coulson scenes have always been tremendous. I’d pay to watch a show featuring those two on a strange planet hunting Ward.

As it stands, Ward, Fitz and a bunch of honest to goodness not Hydra cannon fodder are on Planet X and already hearing the creepy sounds of whatever is out there. Coulson’s not so smooth entry leaves him unconscious. I’d love for the speculation that Will is a Hydra agent is wrong so Coulson has at least one ally against Ward and company.

If it weren’t for The Flash, Agents of Shield would be the best comic book based show on TV right now and each week that becomes a closer contest. I’m not sure how the winter finale is going to top this one, but I’m looking forward to it as much as any episode of any show this season.