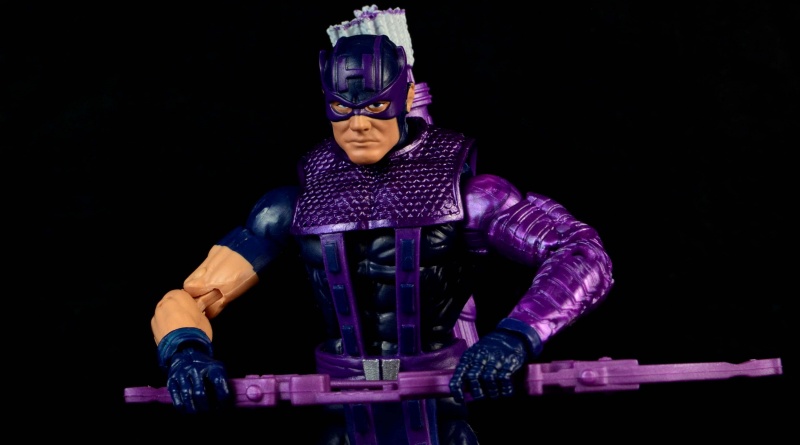 Thanks to the benefit of starring in the Avengers movies, Hawkeye’s star has never been brighter and he’s been a regular fixture on the action figure front.

Considering his increased status, Hawkeye was one of the A-listers in the first 2015 wave of Hasbro’s Marvel Legends line. I’ve had the figure for a while, but it was finally time to see if Hasbro hit the target with this version of the Avenging Archer.

Packaging: I should pretty much cut and paste this for the Marvel Legends packaging.

As part of the Avengers line, we get a big Avengers logo on the front and a helpful drawing of Hawkeye on the side. I wish the bio had more information beyond the literal one sentence explanation of the character.

Likeness: Hawkeye is one of my favorite Avengers. I love his cocky attitude while hanging around war heroes, gods, billionaires, heads of state and gamma infused behemoths. I wish the head sculpt had a bit more character and attitude to it as this one looks a bit too focused and serious for Hawkeye. 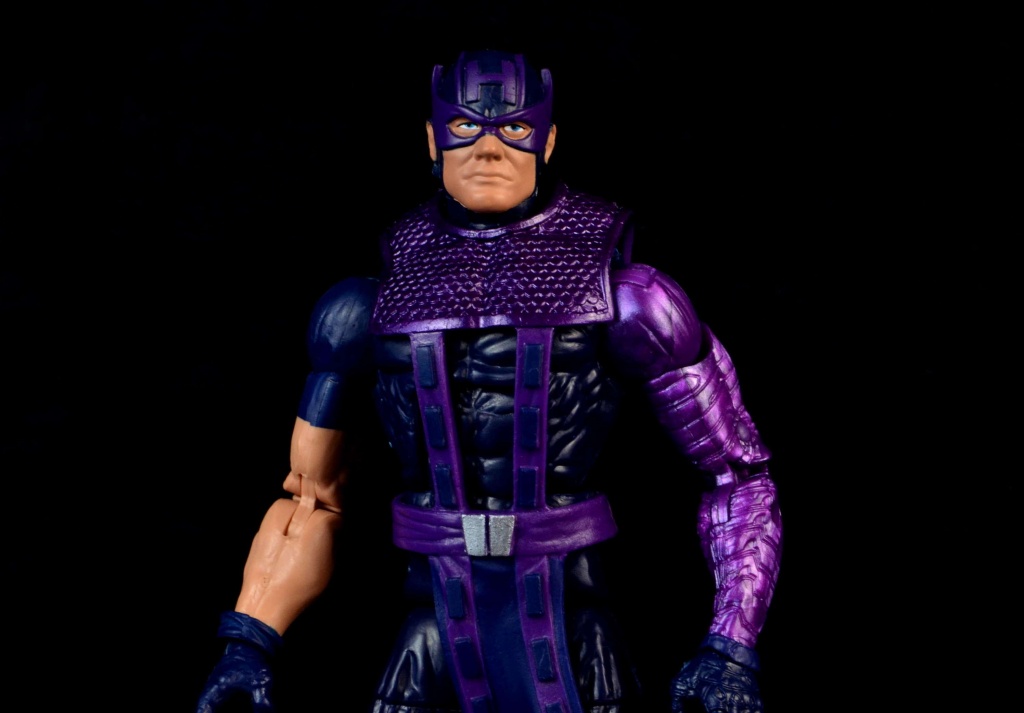 The build is nice and slender for Hawkeye, which is a great fit. Instead of continuing the chain mail to match the chest portion, Hasbro reused the Winter Soldier arm for Hawkeye’s left arm. It looks like a robotic arm and I’d rather Hasbro just gave Hawkeye a bare arm to match the right one. 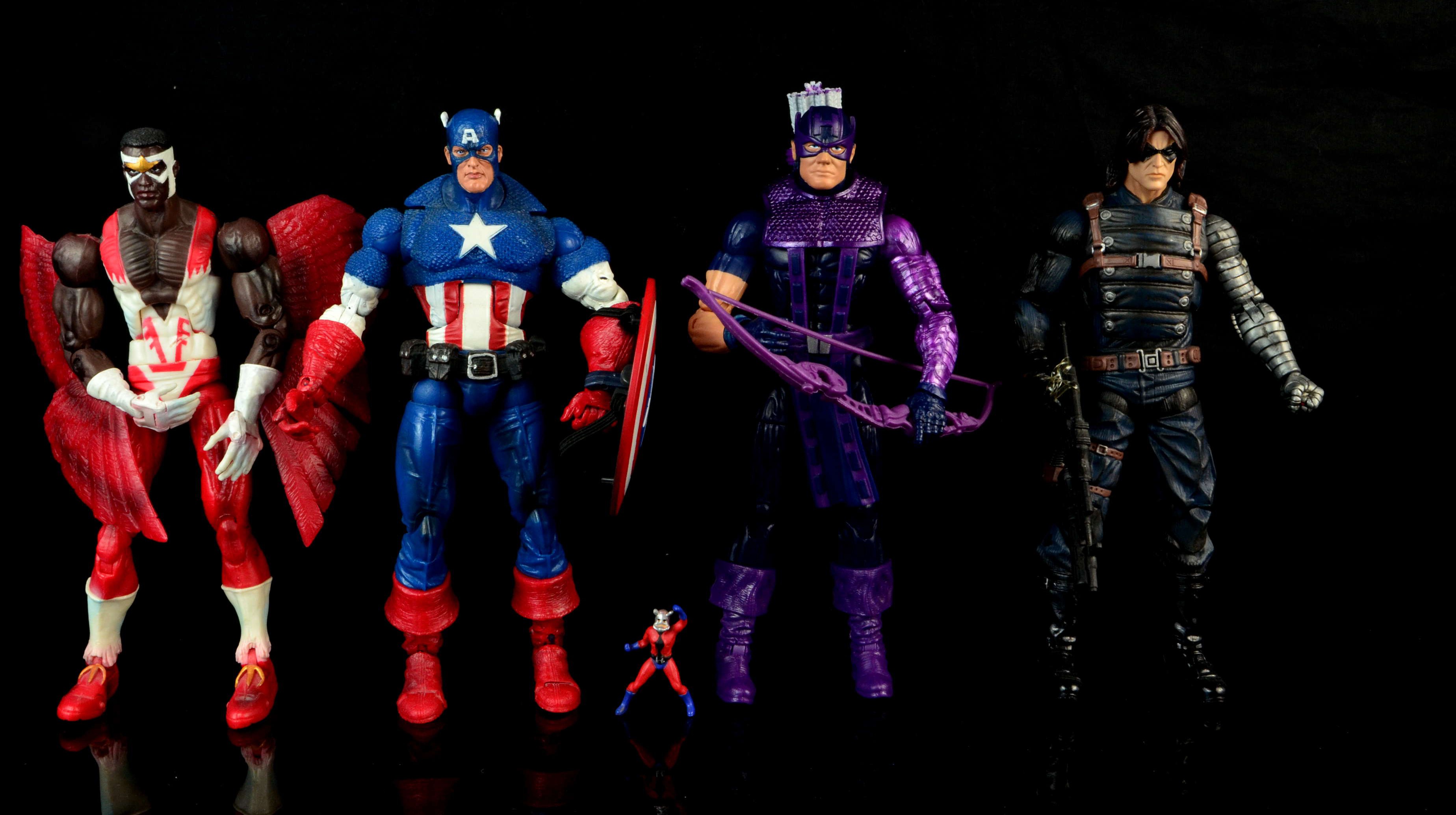 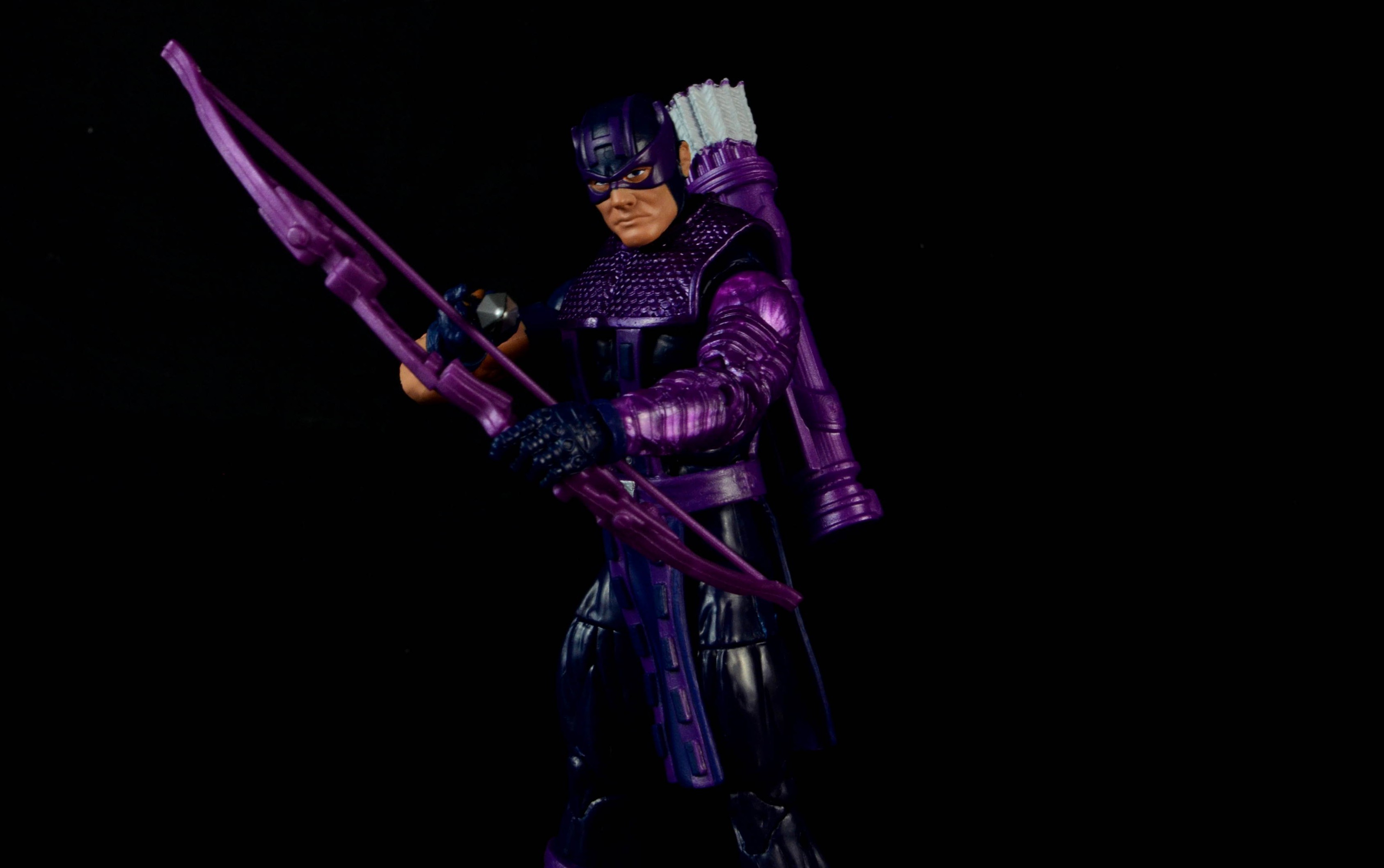 Paint: Thanks to his sharp purple and dark blue outfit, Hawkeye definitely stands out on the shelf. The purple is nice and vibrant with a nice sheen to it. They’re not a lot of heroes that wear purple, but that’s just because Hawkeye clearly does it so well.

Most of the body is molded in dark blue plastic, but it’s a color that doesn’t need a wash to bring out details. It’s a good contrast to the shiny purple. I’m not a fan of eyes looking upward and I’m not entirely convinced my Hawkeye’s eyes aren’t slightly off. Straight on remains my preference. 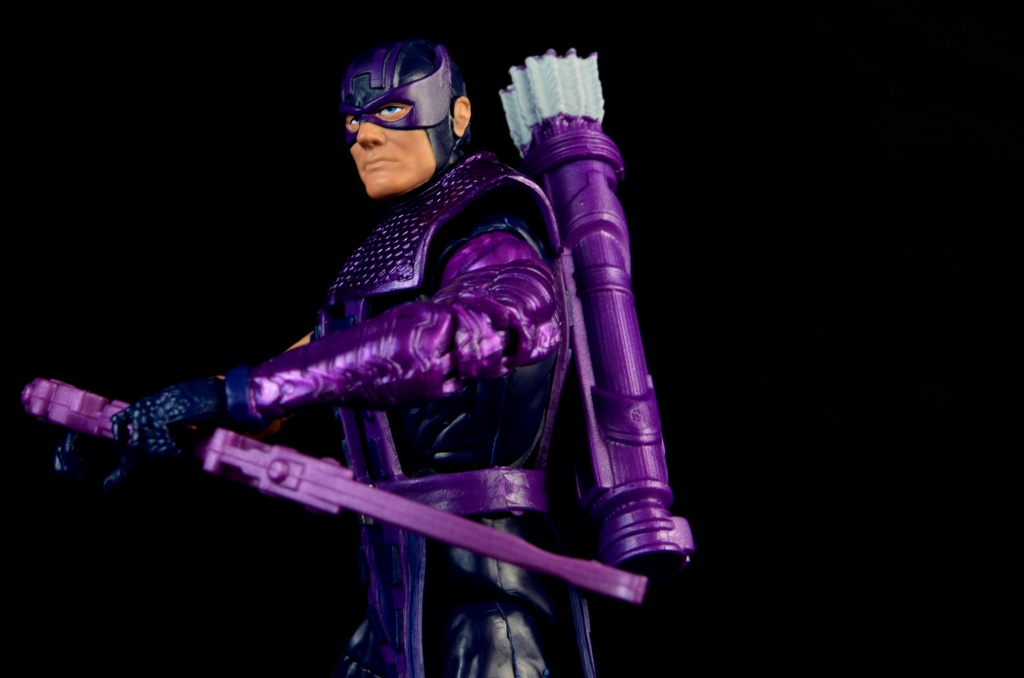 Articulation: The ML articulation is nice and fluid normally, but Hawkeye has a bit of a marionette feel. There’s a real flimsiness along the hip joint connectors making Hawkeye a challenge to stand straight without leaning to one side. Standing issues is one of my major action figure pet peeves.

The Winter Soldier arm is less stiff here, but it’s still tougher than I’d like as I feel like errant posing could lead to the peg snapping. Those issues aside, Hawkeye has: 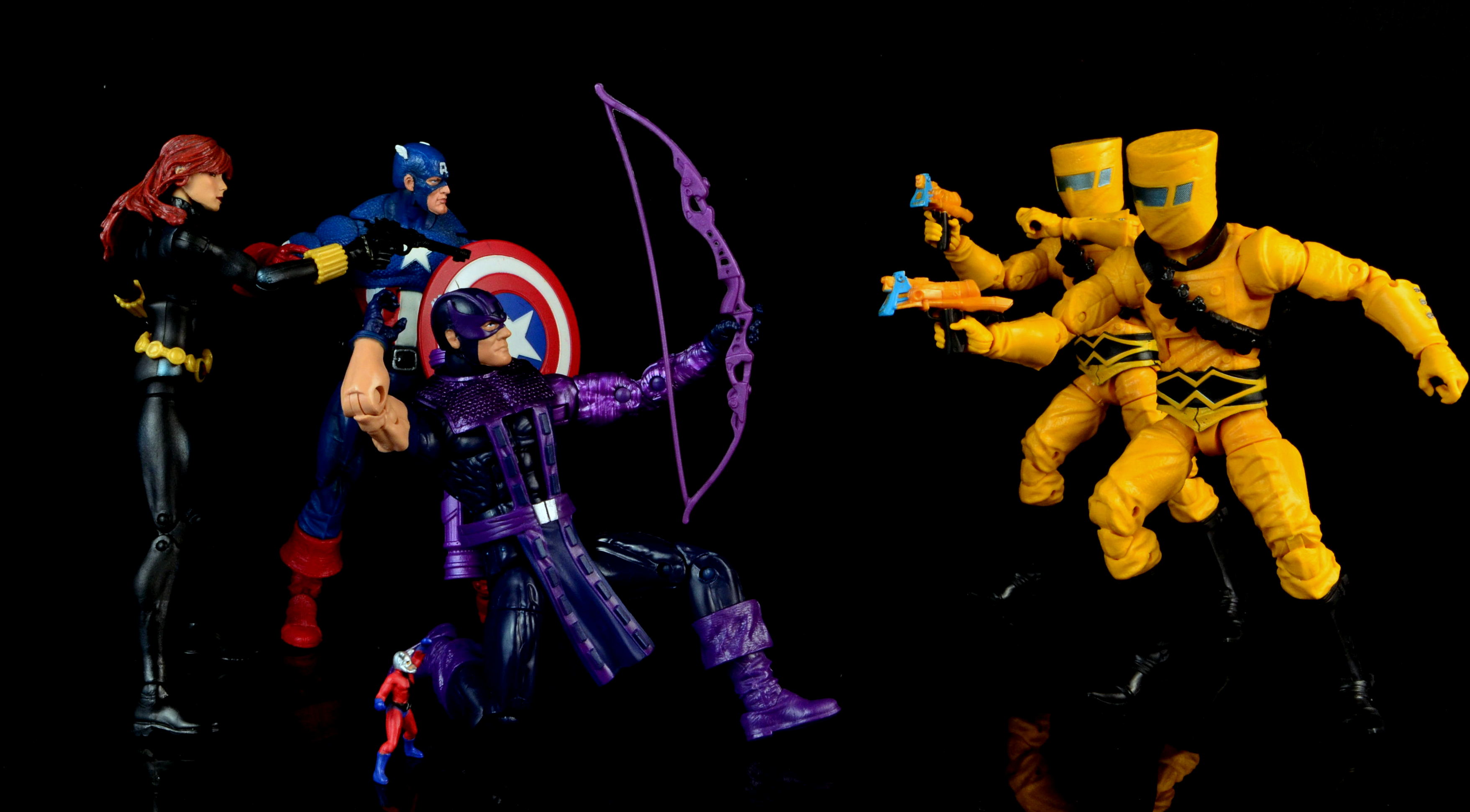 Accessories: Hawkeye comes with a better than regular assortment of accessories. As expected, he comes with his bow and quiver. A separate arrow would have been a nice addition, but I’ve got enough of those to spare from other figures. 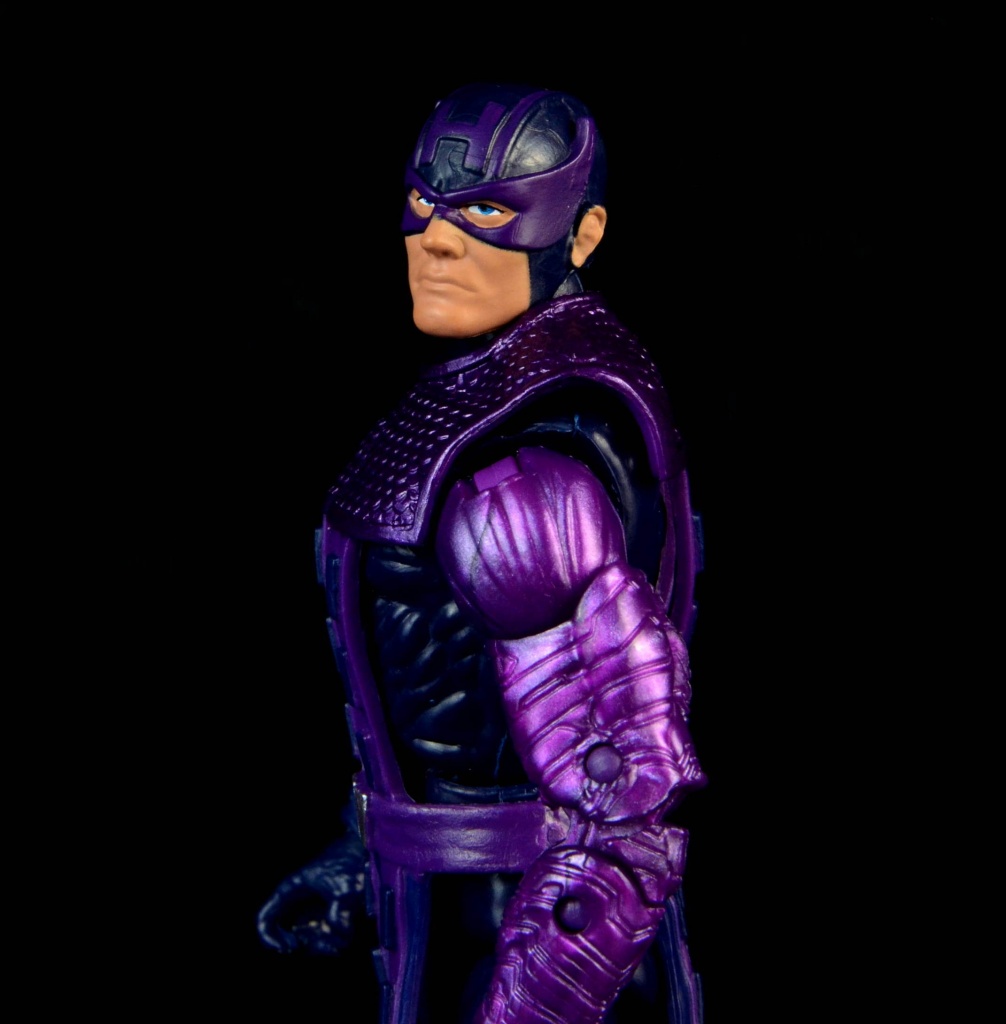 The chain mail portion rides up on Hawkeye’s shoulders so you’ll want to have super glue handy to have it sit more naturally. I also used a dab to keep the connecting piece glued together as it had a nasty habit while I was posing him to come undone.

While it would benefit from some paint applications, Hawkeye’s bow is pretty well done and can fit snugly in his hands. It’s weird how often archers’ bows aren’t designed to stay in the hands well enough to withstand even gentle posing.

Hawkeye comes with the torso for the Odin/Lord Thor BAF. I wish the “T” buckle was absent, but that’s an issue for another review. 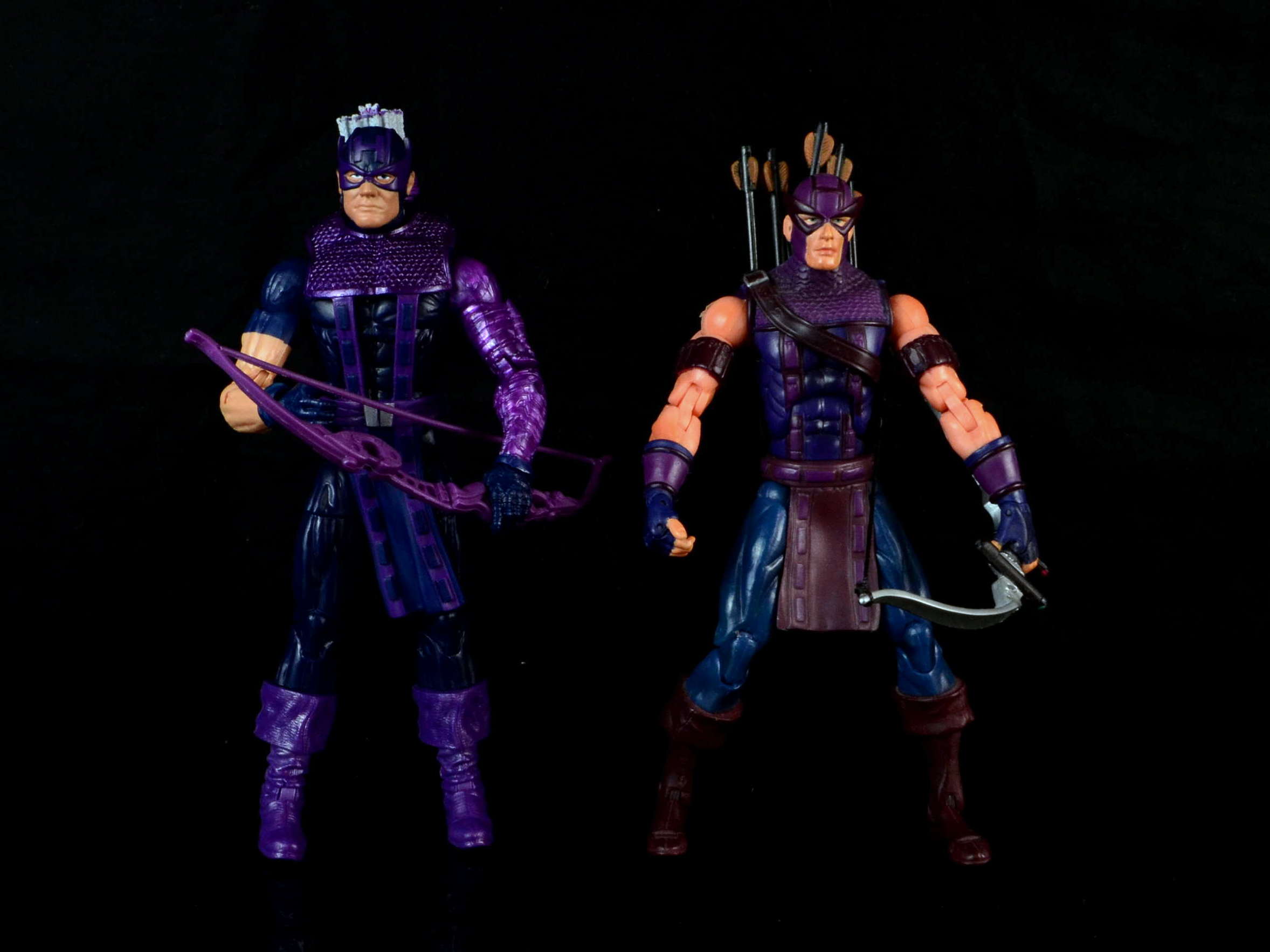 Worth it? Currently, you can get Hawkeye for $8.55 at Amazon.com. For a high quality Marvel Legend figure in 2015 that price is steal. If you haven’t gotten him at this point, now is the time to jump on it. 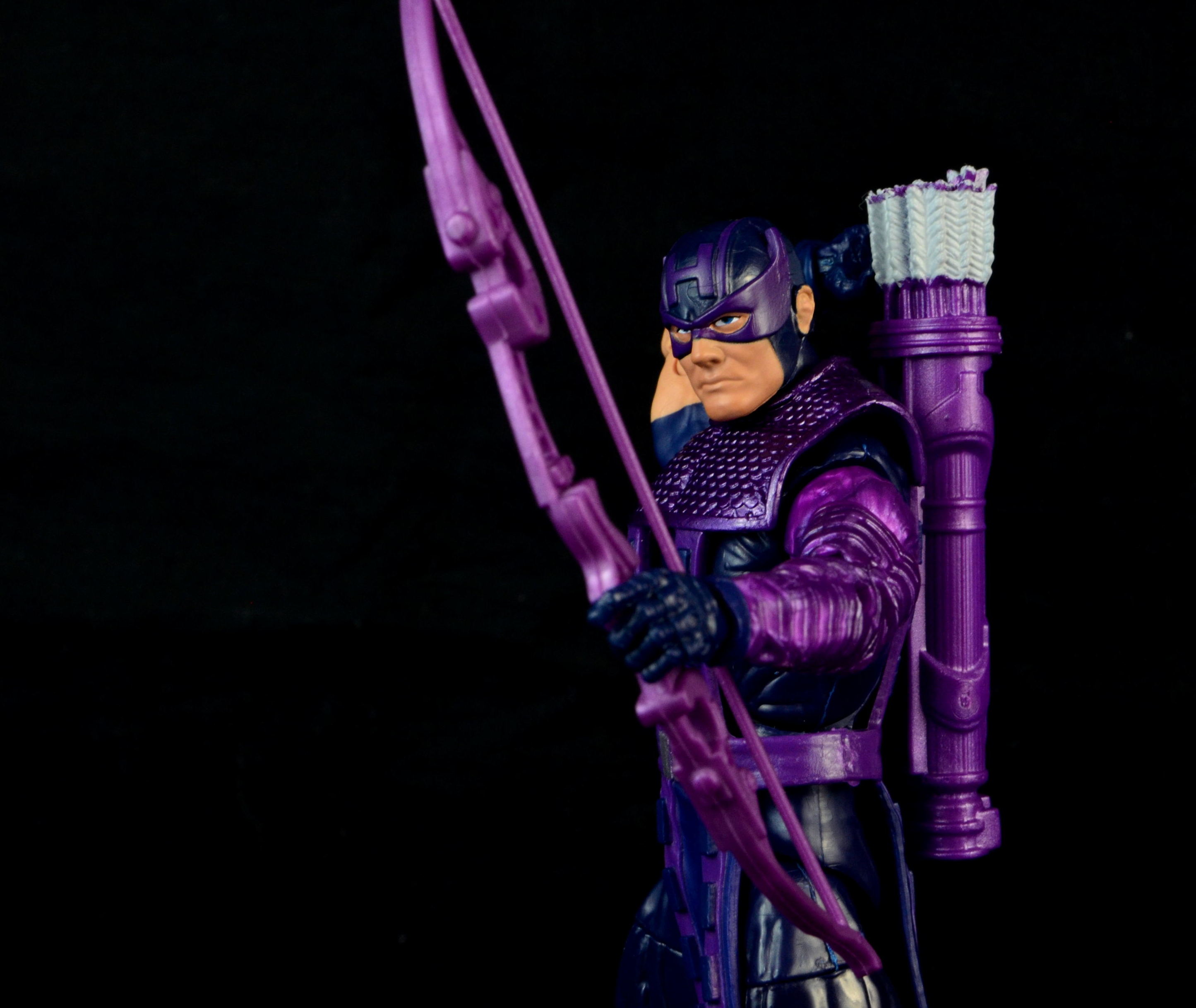 Assuming I just had the bad luck of getting a lemon with the wonky articulation, you can raise the score another point. The Winter Solider arm remains problematic and the headsculpt lacks the character I would expect for Hawkeye. That said, this is the best 6″ Hawkeye on the market and worth adding to your Avengers collection.

Where to get it? Like I mentioned earlier, the absolute best bet is to get it from Lyles Movie Files’ affiliate partner Amazon.com
Marvel Legends Infinite Series Marvel’s Hawkeye 6-Inch Figure