Since the movie division is dragging its feet and it won’t be until 2019 before we see the Justice League on the big screen, Teams Arrow and Flash decided to give fans an awesome team up right now.

Forgive me for the rest of this recap as objectivity occasionally has to sit one out in favor of fanboy geeking out.

I realize one of the main goals this season has been to set up this quasi Legends of Tomorrow team-up show, but if nothing else, this episode reinforced my desire to see a CW Justice League with Green Arrow and The Flash headlining. 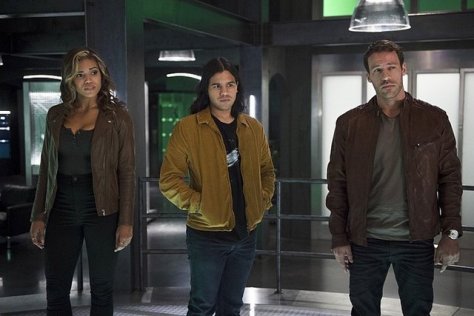 For the first half of a two-parter, we got a lot accomplished from establishing Vandal Savage (Casper Crump) as a Grade A level threat that can’t be taken down by one hero, introducing Hawkman (Falk Hentschel) and killing Cisco’s vibe with Kendra as she gets clued into her destiny.

Cisco and Kendra are all set for a fancy romantic date at CC Jitters (budgets are better spent on cool displays of powers than new restaurant sets) when they get an unwelcome guest — Vandal Savage, who only retreats when Flash arrives.

I’m glad Cisco at least questioned why Team Flash needed to run for Team Arrow’s assistance. It’s not like TF hasn’t handled super speedsters, talking gorillas and sharks and other tech-enhanced villains before. Barry’s logic that magic wasn’t in their wheelhouse felt pretty flimsy, but it was good as any other reason to unite the teams.

Just like Flash vs. Arrow was a nod to the old superhero clashes of the Silver Age, tonight was a throwback to the classic Justice League and Justice Society meet-ups.

Granted, Merlyn’s random pop-ins complete with League of Assassins posse was kinda goofy, but the coolness factor of a pack of ninjas pretty much always wins out over common sense in the end. Ditto for the unnecessary, but always welcome cameo from Neal McDonough’s Damien Darhk.

The action sequences were very well done, but I’m not sure if the two teams hanging out at the Arrowcave and Oliver’s loft wasn’t just as fun. Cisco begging to give Thea a better code name than Speedy was a great bit while Barry and Oliver reflected on Oliver’s sunnier disposition.

To the DC CW showrunners’ credit, Barry was introduced midway through Season 2 of Arrow yet they’ve been able to establish a genuine closeness between Barry and Oliver that’s wholly unique from their other allies. I’d love to see characters like Ray, Laurel and the Hawks inserted into this mix to further explore this laid back heroes off the clock dynamic.

That got ruined when Savage literally crashed the party. Barry caught Savage’s daggers and retrieved Thea and Oliver’s bows to help make the fight more even. It was a nice touch having Thea land the “killing blow” to send Savage retreating once again.

After Cisco revealed he had a vibe that Kendra has metahuman abilities, Barry and Oliver doubled down on their efforts to save her until Hawkman swooped in to help jog her memory.

I loved the Hawkman vs. Flash/Green Arrow fight and got geek-out goosebumps when the frequent bickering comic teammates Arrow and Hawkman were going at it one on one. Eventually, the growing teamwork between Flash and GA was enough to take down Hawkman, who calmed down long enough to tell them Kendra is his reincarnated wife and Savage is trying to kill them to increase his power.

I was a bit disappointed Barry and Oliver didn’t have Hawkman go with them to Central City to stop Savage from getting the Spear of Horus if for no other reason than three heroes are better than two. It’s not like Carter was around for Kendra’s big transformation to Hawkgirl anyway. And poor Cisco. Maybe he would have had a chance if Kendra wasn’t already with Carter for thousands of years.

While this was a crossover episode, I liked that the overall season story arc wasn’t completely ignored. Wells and Caitlin stayed behind to work on a speed formula to help enhance Barry’s speed for the rematch with Zoom. I couldn’t think of a logical way for Johnny Quick’s speed formula to get worked into the show, but a nitrous shot works just as well. 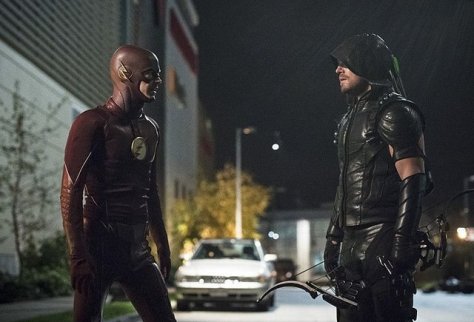 And Patty continued getting closer to Barry’s secret although unintentionally this time as she spied Wells and tracked him down to STAR Labs. The writers seemed to forget there’s a lock on the front door as Patty waltzed in and ended up shooting Wells prompting Jay to take Velocity 6 to save Wells.

As Barry and Oliver wind down after their latest draw with Savage at CC Jitters, a small boy bumps into Oliver. Clearly that’s Oliver’s son his one-time fling did not abort and Oliver recognizes her right away. I’m glad that didn’t get ignored as that’ll give Oliver more of an excuse to swing down to Central City. Please let his name be Connor.

0 thoughts on “The Flash Legends of Today recap S2,Ep.8”

Get the Hot Toys The Dark Knight Two-Face On Sale

Who doesn’t like getting something for free? Nintendo Switch owners can take advantage of a limited time offer to play