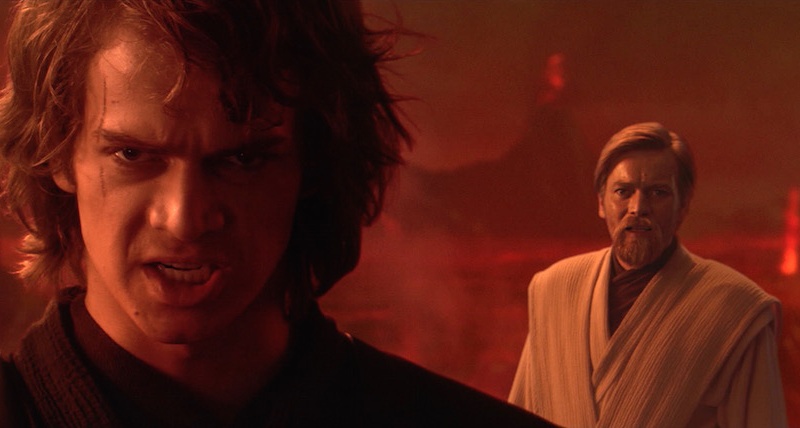 With a willingness to take the Star Wars saga to its necessary darkest direction, Star Wars: Episode III – Revenge of the Sith delivers an epic, masterful payoff to the prequels.

Even without grading on the curve of saying this is the best of the prequels, Sith is the third best film in the Star Wars franchise.  Considering Star Wars and Empire Strikes Back are undeniably two of the greatest movies of all time, coming in at a close third isn’t bad at all.

Sith captures that magical, free-wheeling fun side of Star Wars mixed with the gut-wrenching darker thematic elements of Empire that have you anxious for a happier resolution for our heroes.

Director/Writer George Lucas handles the fall of Anakin Skywalker (Hayden Christensen) and the rise of the Empire like a Shakespearean tragedy. Order Star Wars Shakespeare’s Tragedy of the Sith Revenge Book from Entertainment Earth!

For all the buildup with the prequels in detailing Anakin’s past and the troubling elements around him, Sith was clearly the story in this latest trilogy Lucas was most interested in telling.

Sith was a direct contrast to the Lucas fans thought was forever lost to an out-of-touch creator content to drum up goofy cute characters for kids like the Ewoks and Jar Jar Binks. With a well-deserved PG-13 rating, Sith isn’t the full-fledged family adventure of the rest of the saga, but essential in firmly setting the stage for the final act.

From a spectacular opening act featuring the film’s only space firefight to a chase through a rocky catacomb to several inspired lightsaber duels, Sith constantly provides major action thrills.

While it’d only been three years since the still under refinement visuals on display in AOTC, the CGI is vastly improved and easily still holds up a decade later. This is a gorgeous looking film as technology was now at a place where Lucas could fully bring his ideas to the big screen without a plastic, fake video game visual.

Anakin and Obi-Wan Kenobi (Ewan McGregor) rip through the skies to rescue the kidnapped Chancellor Palpatine (Ian McDiarmid) from the Separatist Army. My biggest gripe of the film remains the far too brief screen time for Christopher Lee’s Count Dooku. Fortunately, Dooku was given ample time to shine in Star Wars Clone Wars – Season 1-5 [Blu-ray] 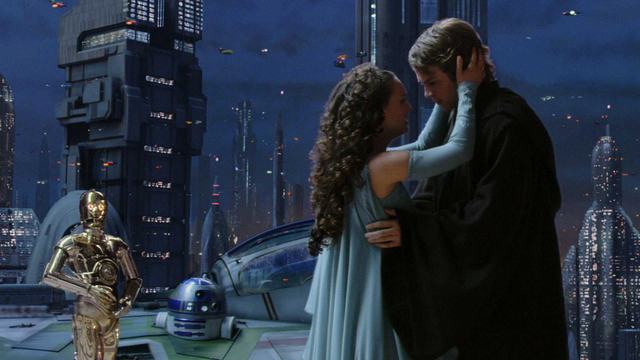 Upon rescuing Palpatine, Anakin is greeted with far more important news as his wife, Padme (Natalie Portman) reveals she’s pregnant. While welcome news, this further complicating things for Anakin as this revelation could lead to his expulsion from the Jedi Order. Worse, Anakin is having visions about Padme’s potential death similar to the premonitions he received before his mother’s death.

Christensen takes a lot of flak for his performance in the prequels, but he’s engaging here as a frustrated hero desperate to protect his family. Christensen has a better control of the nuances needed for his character allowing him to hold his own with his co-stars. With Portman, Christensen conveys strength and reassurance, alongside McGregor he’s matured into a peer and brother-in-arms compared to the deferential take he provides playing against McDiarmid.

With the Jedi Masters Mace Windu (Samuel L. Jackson) and Yoda increasingly suspicious of Palpatine, they make the disastrous mistake of agreeing to Palpatine appointing Anakin to the Jedi Council, forcing the young Jedi to choose his allegiance.

McDiarmid had been the unsung hero of the prequels constantly providing some of the best performances in the trilogy. The opera scene is McDiarmid’s shining moment as Palpatine slyly mentions to Anakin of a Sith Lord who learned how to prevent loved ones from dying. John Williams’ score is again outstanding, but the haunting, ominous tones used here and other Anakin/Palpatine scenes make these sequences standout. 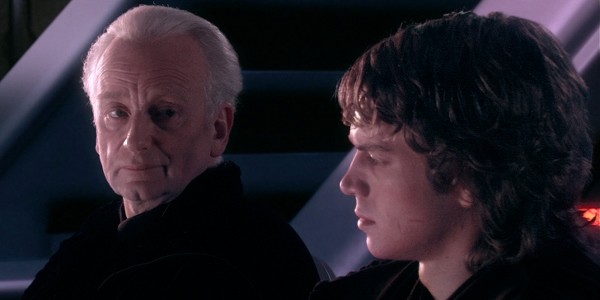 Sith marks Palpatine’s victory lap as all of his plans have neatly resulted in him gaining unrivaled, unlimited power. It’s scary seeing how seductive McDiarmid makes Palpatine’s pitches both to Anakin and the Senate. Palpatine is like a modern day politician playing his constituents and the media who buy into everything he says without question. Equally troublesome is how it’s the one aspect of the prequels that seems most likely to play out in the real world. I’d prefer working lightsabers.

Lucas raises some intriguing questions about the blind obedience people place in their leaders made all the more compelling due to the tragedy that follows it.

The film doesn’t get bogged down into political debates though as the Clone Wars reaches its conclusion with Obi-Wan defeating the new Separatist Army leader General Grievous. As much as I liked the sniveling, mustache-twirling take of Grievous in the film, the version in the Genndy Tartakovsky Clone Wars cartoon [Star Wars: Clone Wars – Volume One]

is far more sinister and compelling. 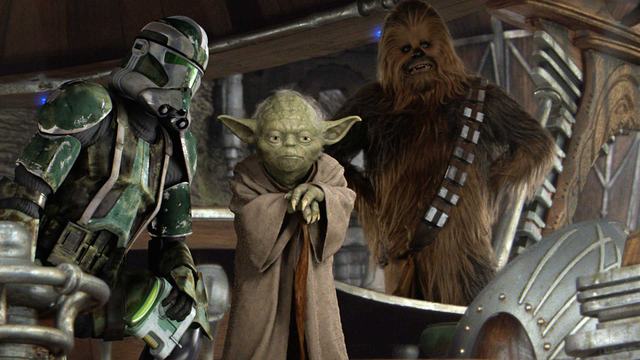 Lucas also finally delivers a massive battle featuring Chewbacca (Peter Mayhew) and his fellow Wookies on the dense forest Kashyyyk. But it’s in the second half where the film reaches another level.

Beginning with Anakin’s fateful decision to the cold, emotion-stirring Clone betrayal with Order 66 to The Godfather-influenced proclamation of The Empire intercut with Anakin’s slaughter of the Separtists, Sith takes a heavy, emotional turn.

Portman hadn’t always gotten the strongest scenes, but in Sith’s second half, she gets a chance to flex her acting prowess. First when Obi-Wan tells Padme of Anakin’s actions before confronting him herself leading to the penultimate lightsaber duels of the series. 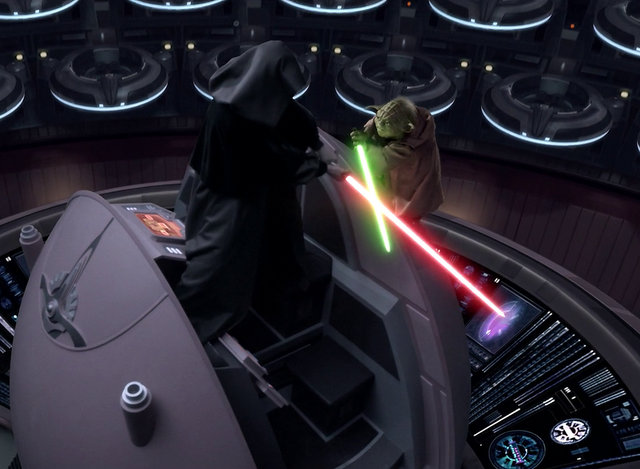 Yoda battles Palpatine in the heart of the now fully corrupted Senate in an impressive spectacle while Anakin fights his former mentor in a fiery lava-drenched backdrop of the volcanic Mustafar.

No duel has been as personal as Obi-Wan and Anakin. It’s like watching two mirror images fight and Lucas reinforced the notion that Obi-Wan taught Anakin all of his best tricks as they continually counter each other and attempt similar moves.

Like McDiarmid, McGregor had been stellar throughout the prequels, but in this final act, he delivers the most heartbreaking performance strongly conveying the pain and conflict Obi-Wan has in battling his best friend to the death. It’s still the one scene in the saga that puts the biggest lump in my throat.

Lucas finds a very creative contrast of life and death as Anakin Skywalker’s ‘death’ leads to the birth of Darth Vader in a blackened, shadowy operating table compared to Padme’s dying moments leading to the birth of a new hope.

Throughout the darkness of the second half, Sith leaves us on a promising note that Palpatine’s reign of terror is possibly, finally coming to an end.

Sith may not satisfy prequel critics convinced Lucas ruined their childhood for not telling his story in the way they wanted, but it’s a spectacular outing in the traditional Star Wars fashion. This one definitely doesn’t disappoint. 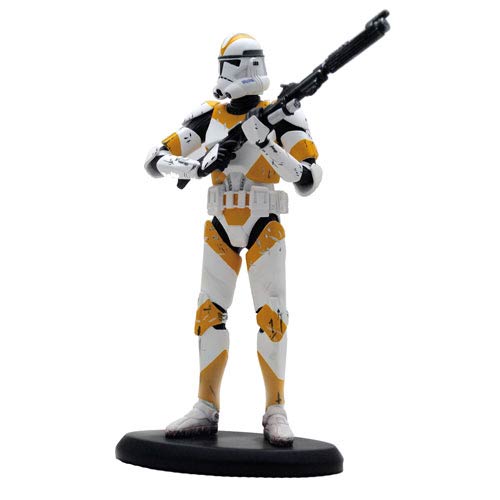 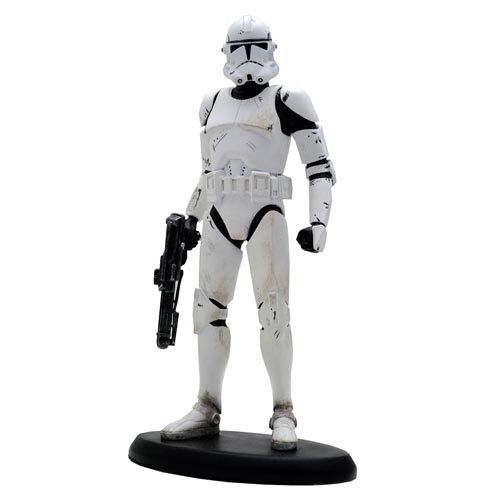