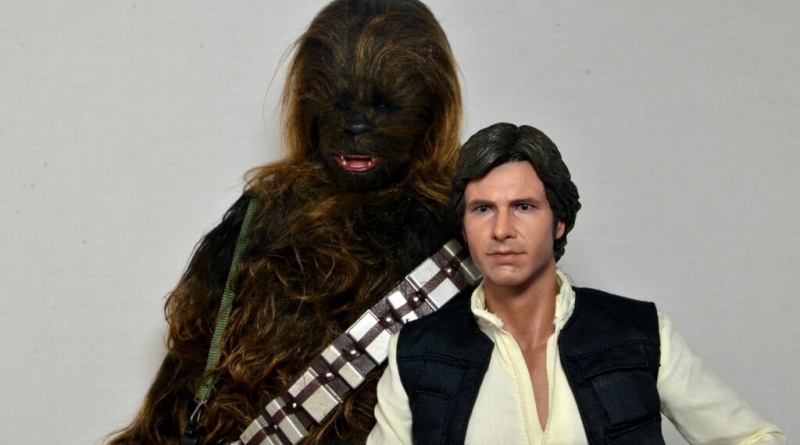 Can you feel it? The hype for Star Wars: Force Awakens is almost over and we’re just hours away from the biggest release of 2015. Not that I needed anything else to get me stoked for the next chapter in the Star Wars saga, but I decided now was as good a time as any to take a look at the latest Hot Toys figure set.

There’s Bert & Ernie, Nathan Drake & Sully or Batman & Robin, but for me the quintessential twosome are Han Solo and Chewbacca. Given the option to purchase them together was a no-brainer for me. Let’s see if they can make the Kessel Run or conk out before reaching hyperdrive. Hit it!

Packaging: Hot Toys isn’t exactly known for having the flashiest packaging on the market. With the price you pay for the figures, they’re not something you need MOC.

Even though it’s an extremely basic packaging, the outer box is a classy looking packaging. The figures are posed in a trademark action pose in a stark black backdrop framed by a dark grey V border.

The inner box is where Hot Toys is putting in its bid for packaging of the year with a terrific movie poster-esque look at the figures with a royal purple space backdrop and some more action shots.

As with most Hot Toys figures, there’s a number of layers to open up before getting to the figure. They’re tightly packed, but you can get them back into the box without much of an issue. The biggest in unboxing them is removing the plastic around the wrists, ankles and head, which I appreciate to prevent paint damage.

Likeness: There was a lot of concern when the first few prototypes were revealed and some folks said the Harrison Ford likeness more closely resembled John Travolta. While the headsculpt seemed a bit off in pictures, in person this is another stellar Hot Toys masterpiece. 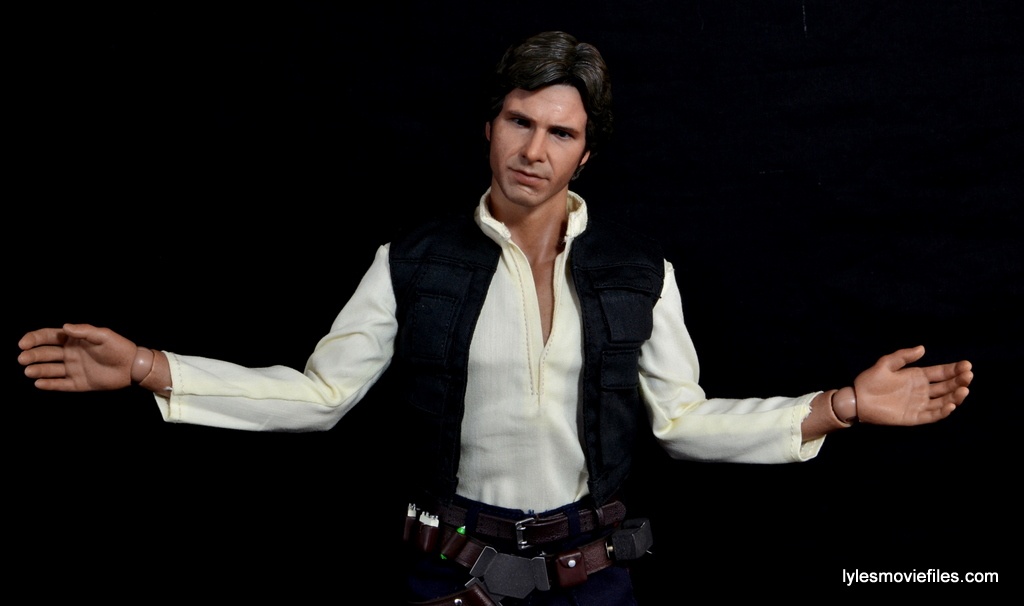 The sculpt has a ton of personality and I can picture Han scoffing when questioned about the Millennium Falcon’s speed or complaining about just leaving this party. Even Ford’s scar across his chin is faithfully captured.

Chewie requires a bit more checking reference pictures and a little futzing with the included brush to get a more film accurate appearance.

It took me awhile to figure out what my issue was with Chewie’s headsculpt. I wasn’t sure if the hair placement was a little wonky, the expression was off, but the issue finally hit me — it’s the hair color.

Chewie’s hair should be light from his brow down with the exception of his eyes and mustache. The figure is less consistent with darker hair throughout the head. That means Chewie’s eyes, which have a  sunken-in appearance are somewhat lost and it’s throwing off the likeness a bit.

Scale: I didn’t dig out my Bespin Luke out, but Han looks to be accurately scaled for a regular sized guy. More importantly, Chewbacca is appropriately taller by a wide margin. Han’s head comes just over Chewie’s shoulder. Assuming Luke is smaller than Han and Leia is shorter than both, Hot Toys will have nailed the Big Four’s scale.

Paint: Hot Toys’s paintwork has no competition. You pay for this high level of figure and you won’t need to worry about the issues that plague mass market releases. 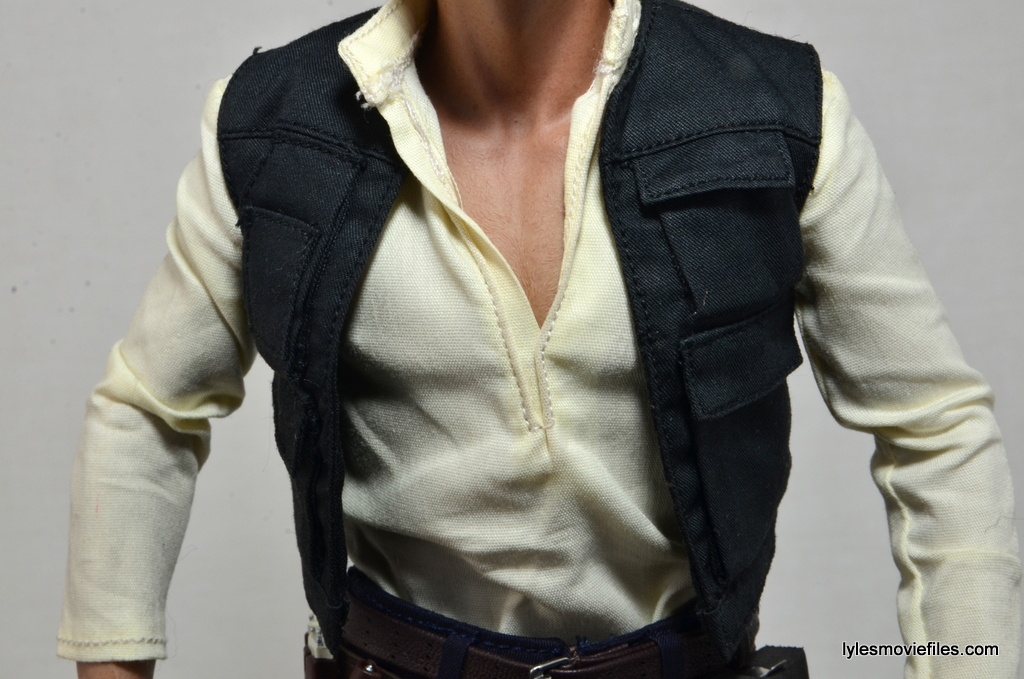 If you wanted to look for another nitpick, Han’s chest hair is so lightly painted you won’t really see it unless you’re right up close.

Outfit: Han’s outfit is meticulously recreated here. The shirt has some wires around the collar allowing for some flexibility with how it is arranged. The seams along the shirt and vest are well done and the shirt has the right hue of off-white. 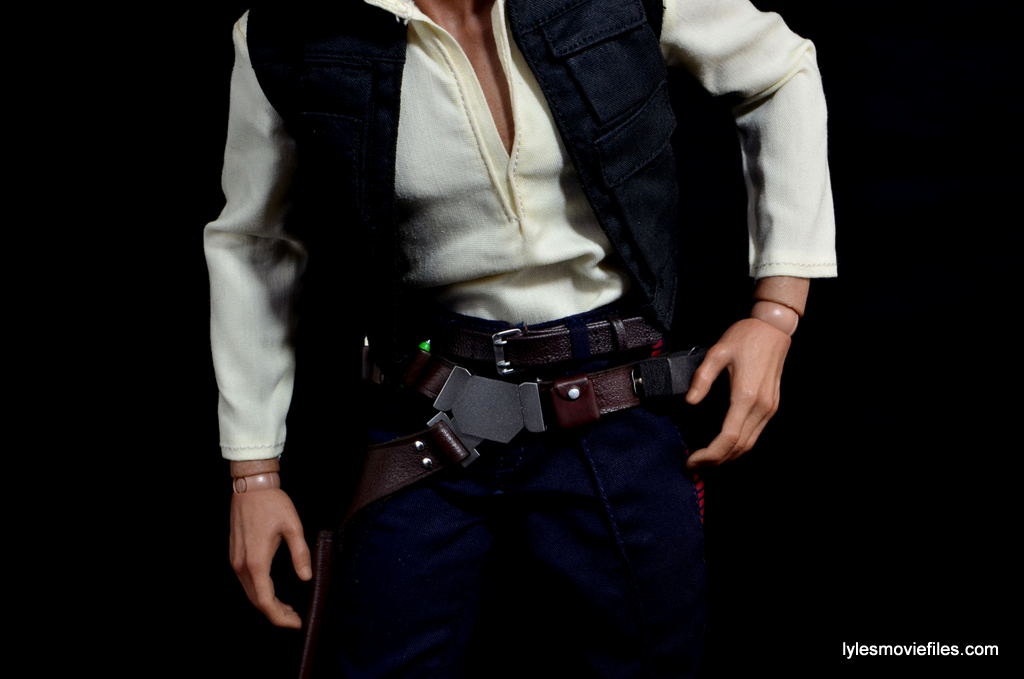 Han’s unique holster and belt set-up flow nicely on the figure as well. I really like the tall leather boots, which are loose enough to not hinder articulation.

Chewie’s “outfit” is the fur. Chewie has had rotten luck on the 12″ front. The fur naturally provides the obvious stumbling block. Hot Toys absolutely nailed this and this execution is practically worth the price of the set alone. The fur has layers and arranged so it doesn’t have that walking carpet look. 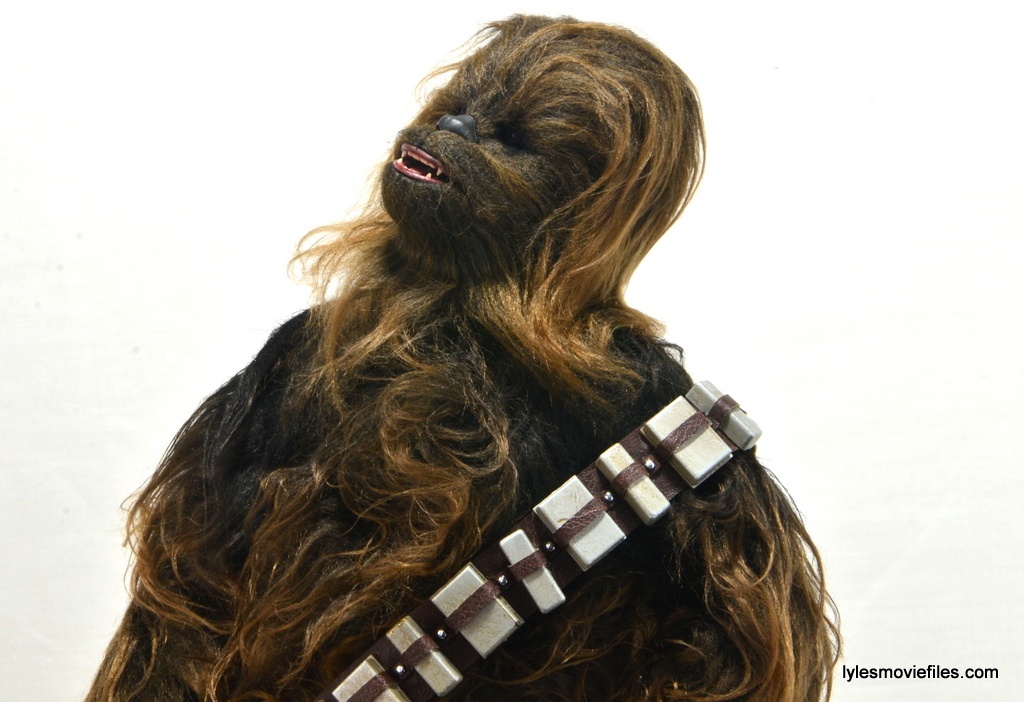 It’s appropriately stringy and wavy providing the best figure version of Chewbacca possible. I know Hot Toys can make a few switches for an Empire Strikes Back or Return of the Jedi version, but you won’t really need another Chewbacca. I say this fully realizing Hot Toys would suck me in with an Empire set with disassembled C-3P0. 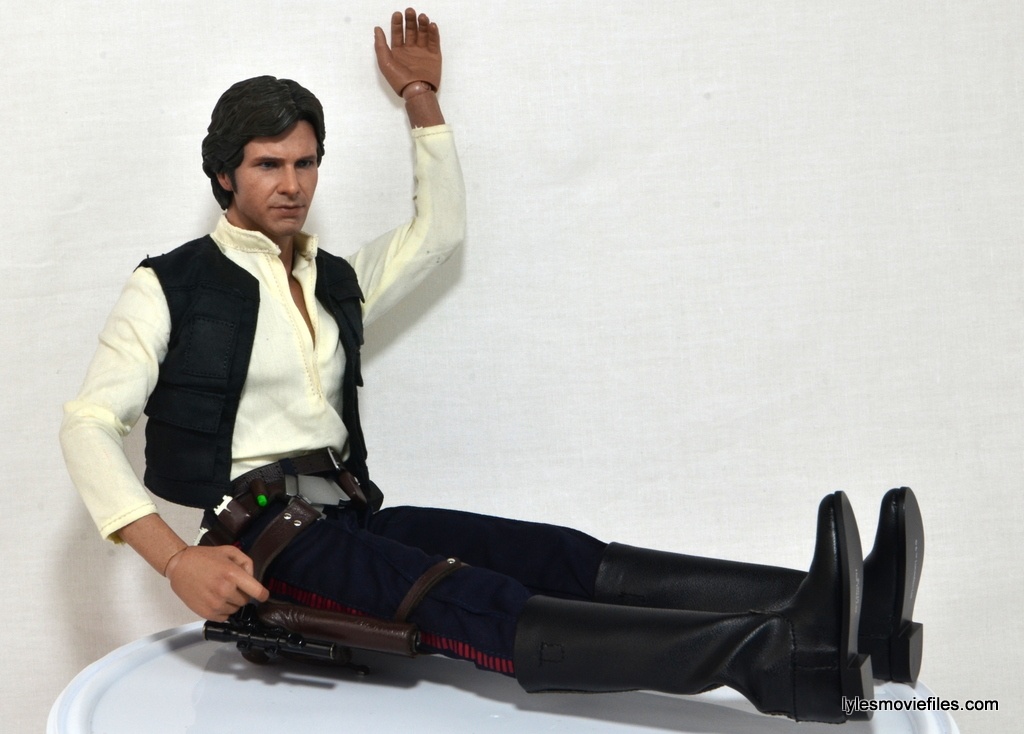 Articulation: Han uses a regular Hot Toys body so getting him posed wasn’t a problem. I’m always confident when moving Hot Toys figures and while Han has nice, tight joints, they moved seamlessly and without any trouble.

I was more impressed with Chewbacca though. I was worried the fur was going to hinder the articulation, but there’s no problem at all getting him arranged in any natural Chewbacca pose. I was even able to get his ‘that’s because droids don’t pull people’s arms out of their socket when the lose’ pose. 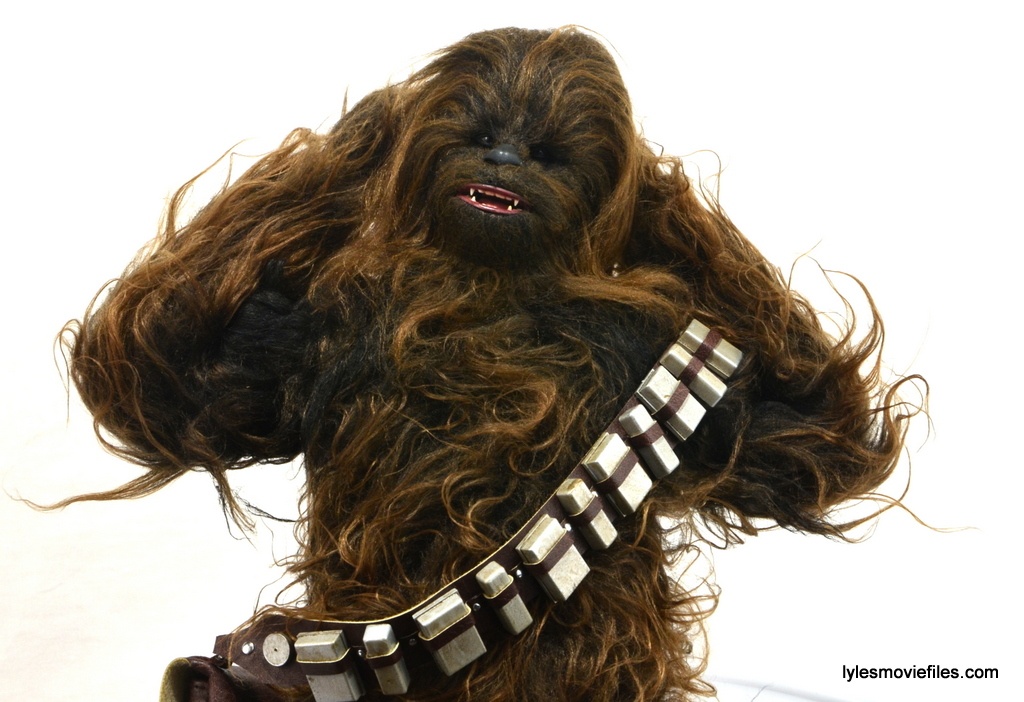 Both figures come with stands, but you’re not going to need them. Hot Toys’ articulation model allows for very secure center of balance. You won’t have to worry about them toppling over in the middle of the night. 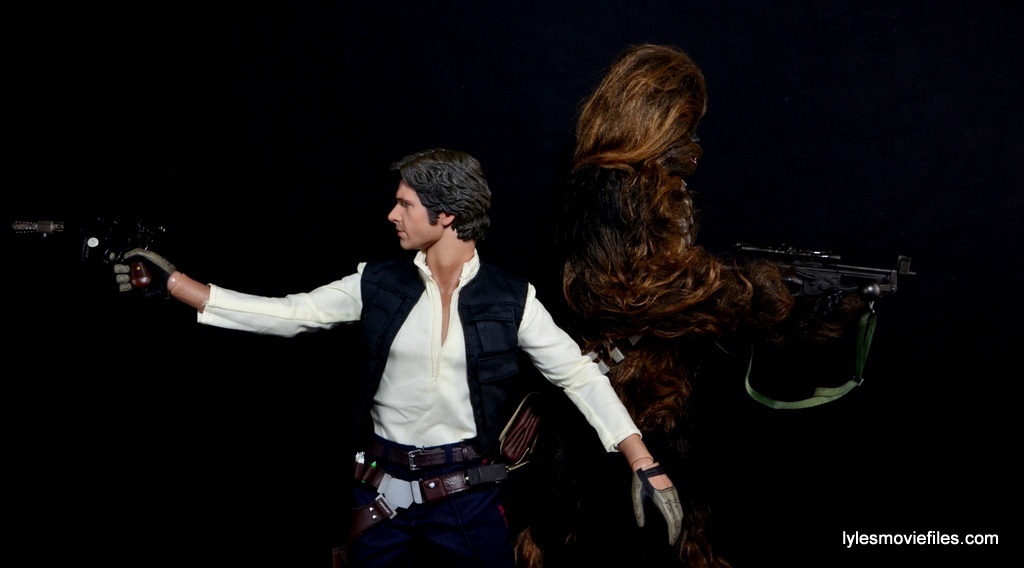 Accessories: I grabbed the Sideshow exclusive set, which is the way to go thanks to the addition of a pair of necessary Star Wars accessories. 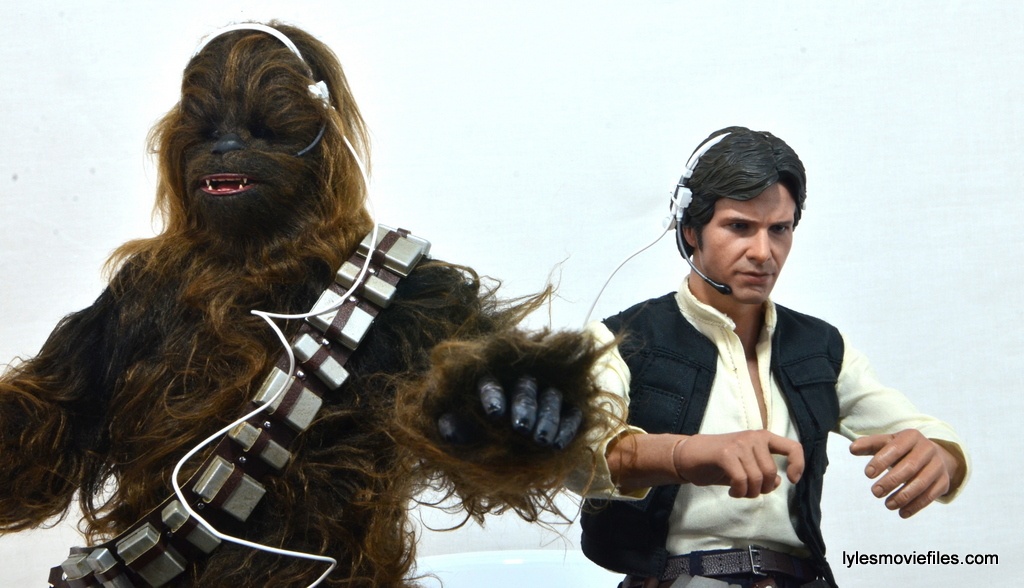 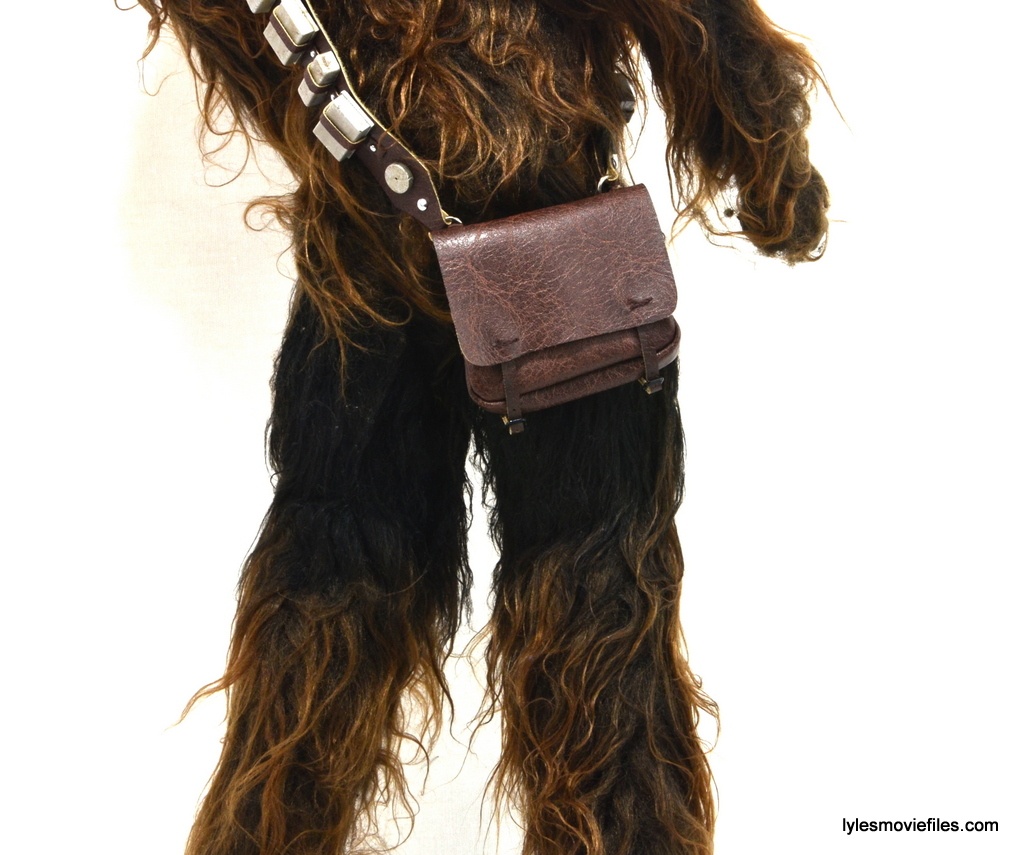 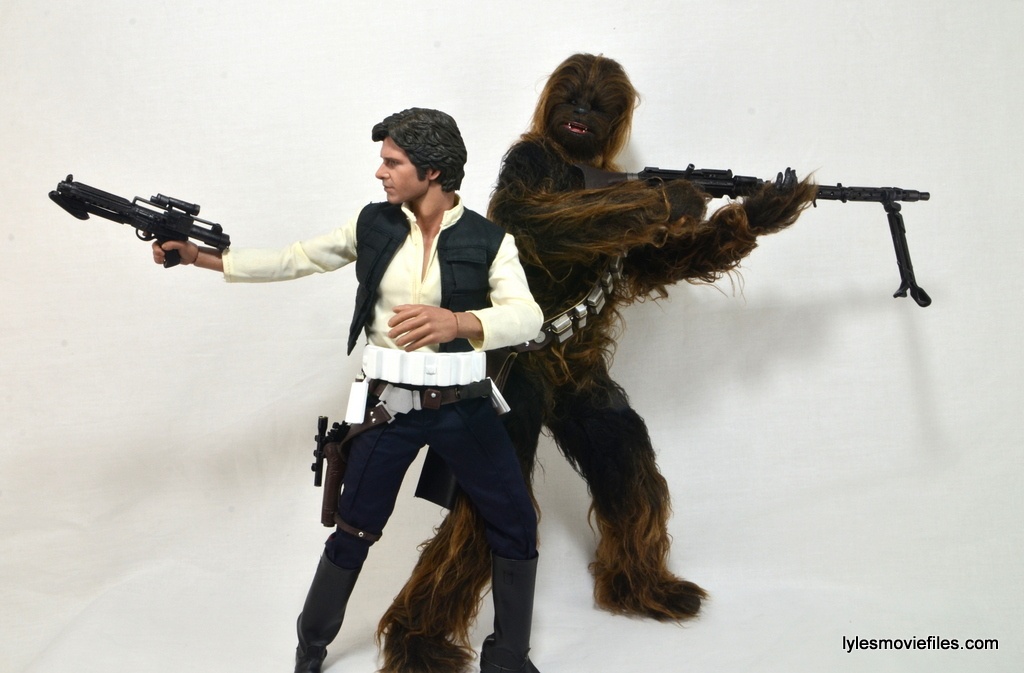 Exclusively for the Collectible Set:

Worth it? The set was $479 not including shipping, which comes to just about to the regular $230 price range for a standard figure. That wasn’t cheap, but I definitely felt like I got my money’s worth and then some with these two.

Now hopefully Hot Toys will deliver on that Millennium Falcon cockpit so I’ll have the perfect display base for them. 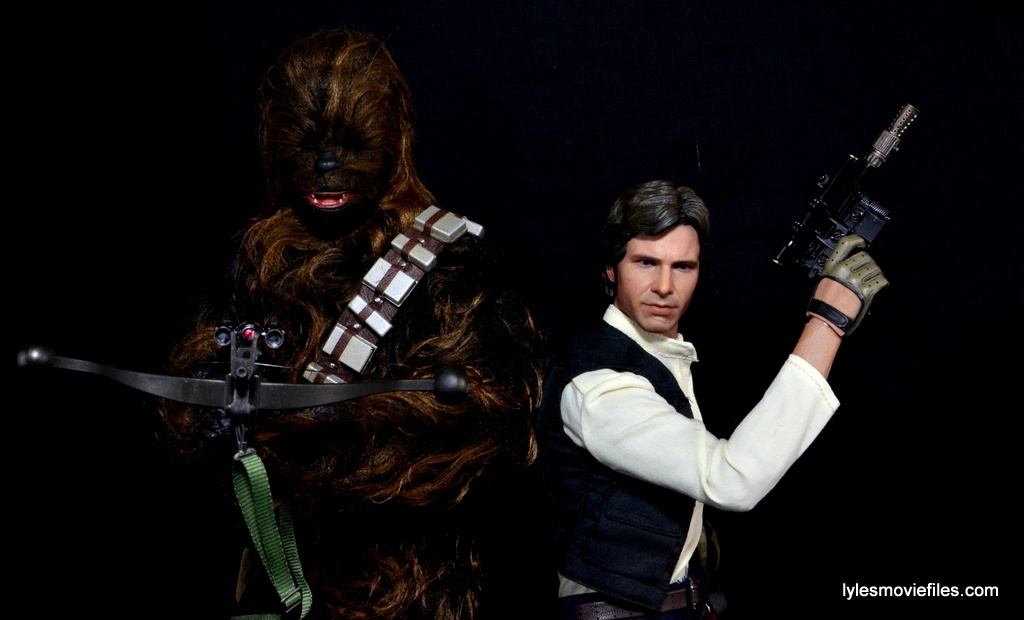 Chewie’s head hair color aside, I’d really be reaching for any issues. This is one of my favorite purchases in 2015 and both my 7-year-old self and 40-year-old self are ecstatic to have this fantastic set in my figure collection.

Where to get it? Unfortunately, the set and solo figures are both sold out at traditional retailers like Sideshow Collectibles and Big Bad Toy Store. The best deal I saw was on Amazon.com: Han Solo and Chewbacca Sixth Scale Figure Set by Hot Toys 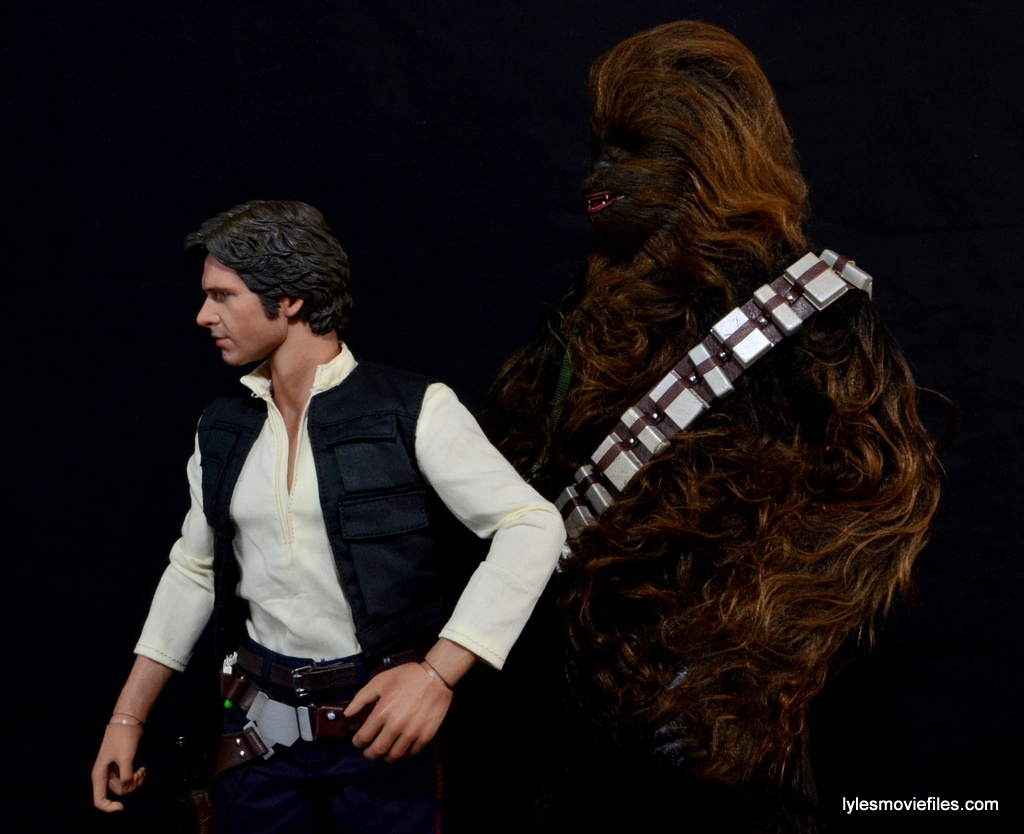 It’s pricier than what you could have pre-ordered it for, but this is one set you don’t want to sit back and watch prices continue to soar.