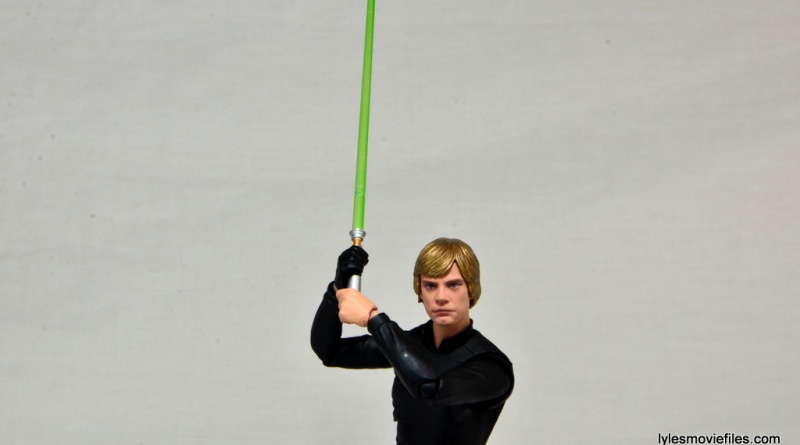 I’ve never been as invested in a character’s hero’s journey more than Luke Skywalker. Though some have come close, he’s still my favorite pop culture protagonist. His appearance in Star Wars: Episode VII – The Force Awakens only whetted my appetite for more adventures of Luke Skywalker.

With my Star Wars interest at a I figured now was a good time to finally crack open the SH Figuarts version of Luke from Episode VI: Return of the Jedi. This is my first step to a higher end 6″ Star Wars line. Let’s see if I’ll need to be afraid.

Packaging: Just when I thought McFarlane Toys cornered the market on streamlined packaging, SH Figuarts. This package was so compact I was worried I’d gotten cheated out of something but it’s all there. This is a simple, basic packaging that’s not fancy and certainly won’t be all that exciting for MOC collectors.

I like the look of it as it hits that nostalgia button for me with its similarities to the old Kenner Star Wars with the black and silver color scheme. 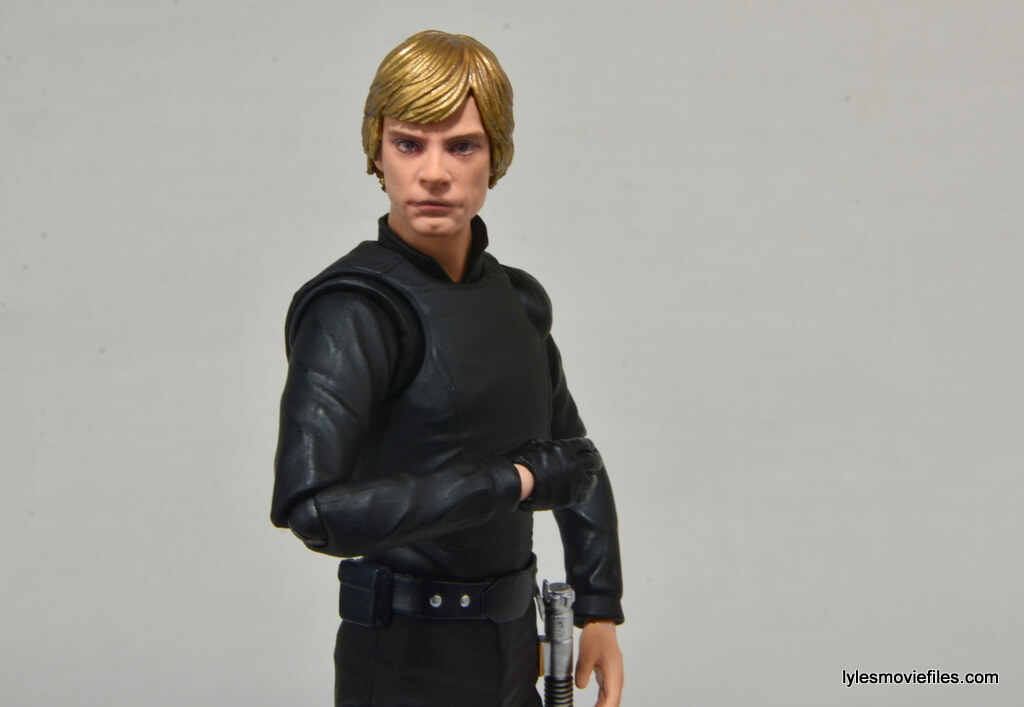 Likeness: Hasbro hasn’t been able to get it down for its 3 3/4″ or 6″ line, Sideshow Collectibles is getting closer and closer while Hot Toys has nailed Mark Hamill’s likeness. Figuarts version is pretty close for the scale even if it’s missing some of the distinct elements like Hamill’s moles. 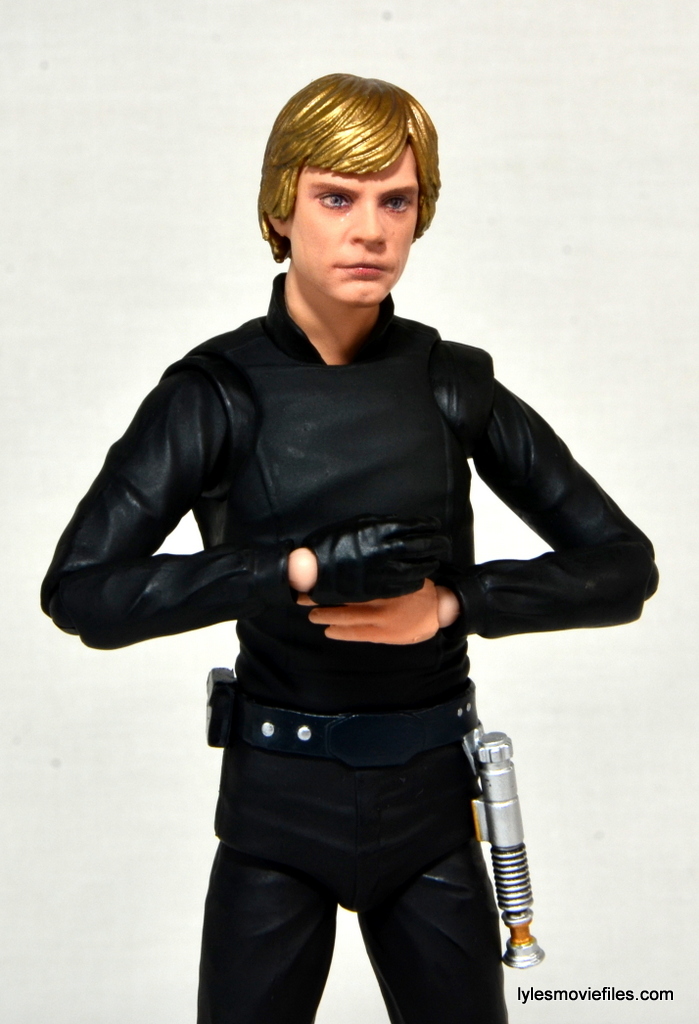 The expression is good and looks like Luke is deep in thought and determining his next move. I prefer neutral expressions and this one does a great job of handling that while offering a hint of Luke’s mindset.

Scale:  If you needed a gateway figure to move away from the Star Wars Black line, this will likely do it. Luke fits in just right with the Hasbro figures. While I can’t envision army building Stormtroopers from Figuarts, I’m glad to see Luke maintains his shorter than a Stormtrooper status when matched up against Hasbro’s line. 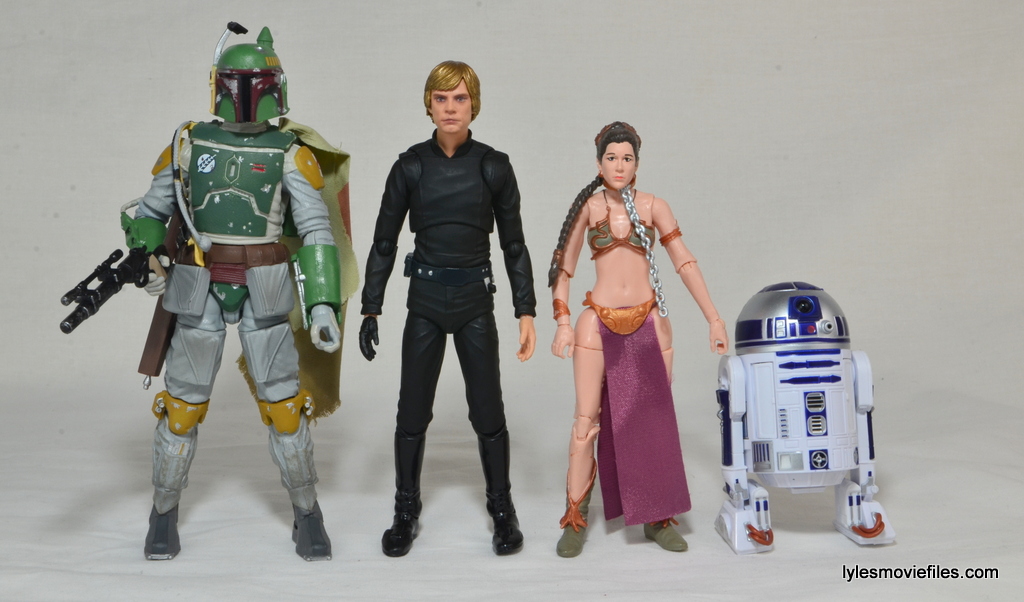 Luke fares just as well with the non armored figures like Boba Fett and looks to be the right height next to R2-D2 as well.

Paint: Figuarts used a different technique than I’ve seen as the eyes are printed on instead of painted. It definitely looks different when you’re up close, but it’s not something you’ll really find distracting from a regular distance.

You’re going to immediately notice the gold used for Luke’s hair. It stands out in the wrong way and looks more like the correct color for C-3P0’s parts than Luke’s hair color.

Beyond that, most of the figure is cast in the appropriate colors so there’s not a lot of focus on in this category. The silver accent points on the belt are clean and the boots are done in a nice glossy material to capture that leather look. 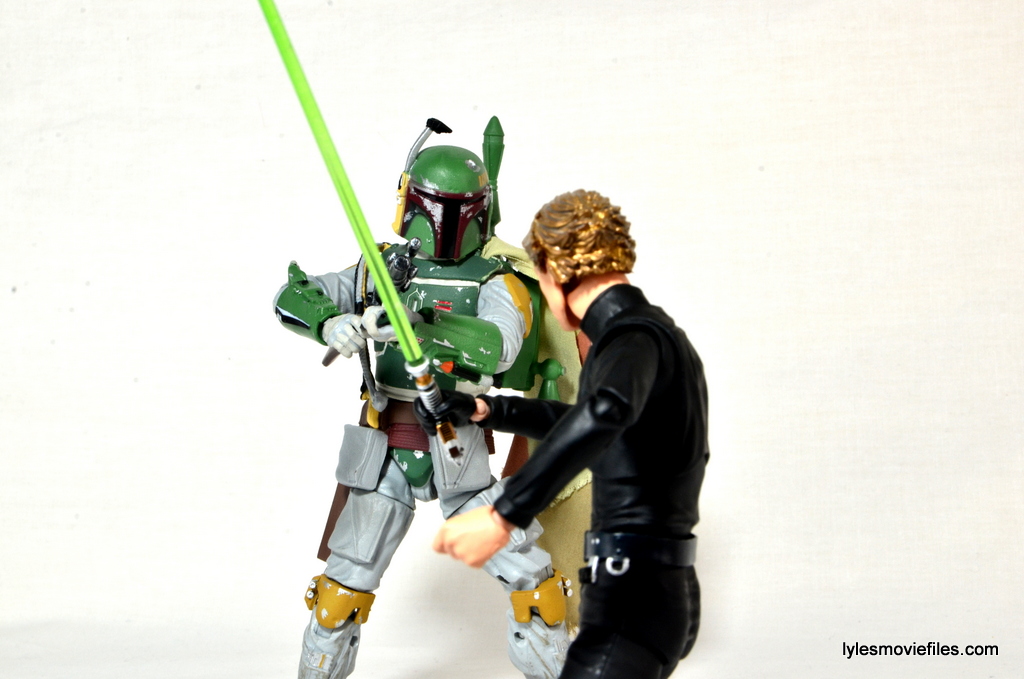 Articulation:  Beyond anything else, this is the category where the figure truly shines.

Having all those articulation points is one thing, but the execution is very smooth and natural thanks to the numerous ball-joints. There’s a graceful flow to moving the joints and none feel like they’ll get especially loose over time. 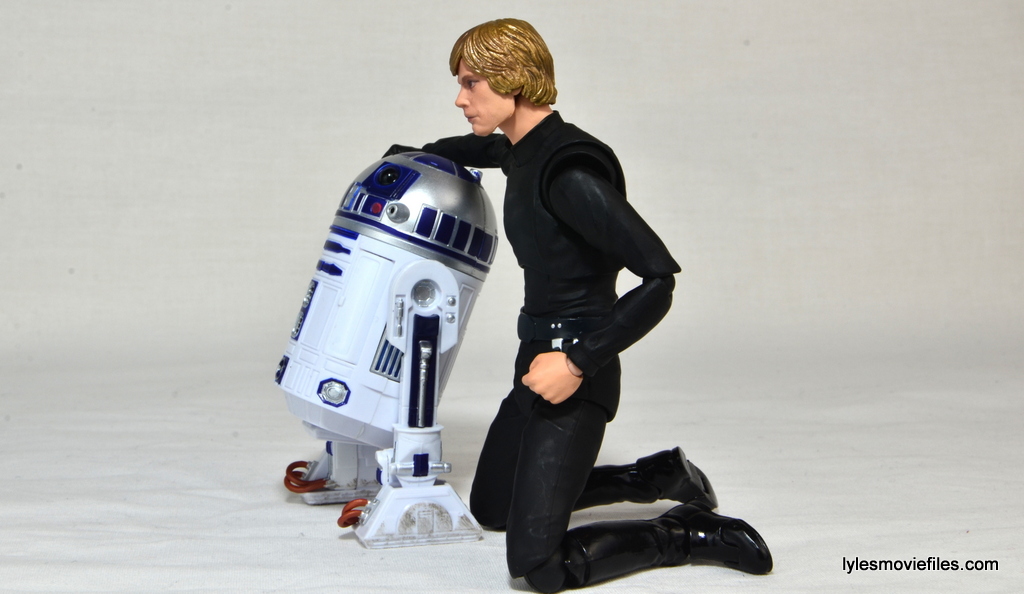 I need to get around to opening some of my Hasbro Black Series Speeder Bikes to test for sure, but it seems like Luke wouldn’t have any trouble sitting along one of them. Sitting squarely in a seat on the hypothetical Millennium Falcon … or Imperial shuttle, seems like it would be more challenging. 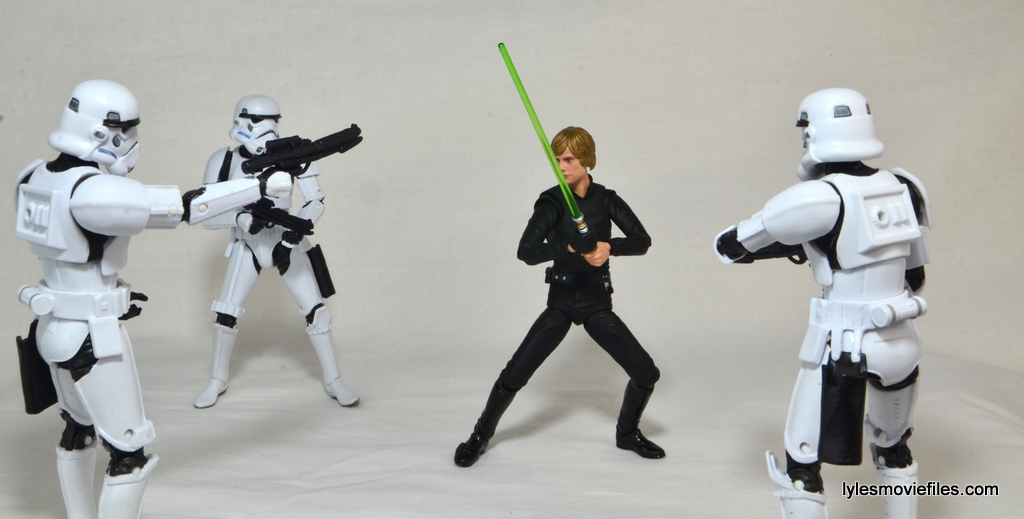 I’ve commented on this for DC Collectibles’ Icons line and it’s fair to do so here as well in noting the leg articulation doesn’t allow for much of a front kick. You’ll be able to barely get a knee kick. I think Luke used a side kick on Vader during their duel so it works out.

Accessories: Luke comes stacked with accessories, some of which are more useful than others. We get three sets of hands: a fist, lightsaber gripping and wide open.

Considering the various options and particular point of the movie the attire is based on, Luke shouldn’t have the non-gloved left hand, but it would have been nice. The pegs come on and off easily enough and after getting over my initial fears, I’m not too worried about them breaking off unlike say Hot Toys figures. 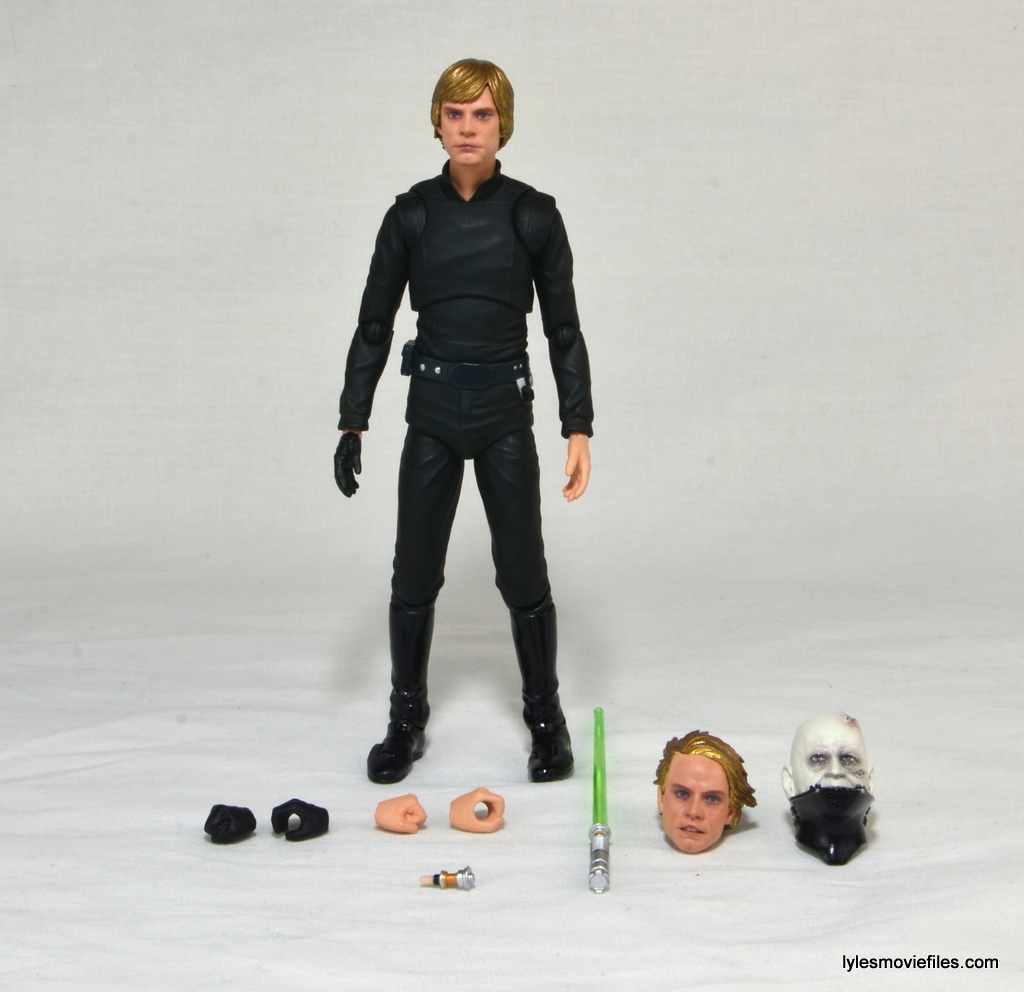 Figuarts found a creative workaround for the lit/unlit lightsaber quandary. The hilt has a peg that you can place the lit or unlit top on.

It’s a nice option and I feel much more comfortable the saber won’t get broken off with this version than the smaller scale Hasbro versions.

When the saber is unlit, you can attach it to Luke’s belt thanks to a plug and a hole in the hilt. The saber fit snugly and didn’t pop off while I fidgeted around with the figure, which isn’t always the case with those types of accessories.

Luke also has a second head with windswept hair. This one is intended to reflect Luke’s expression while fighting atop Jabba’s sail barge. By itself that’s fine, but we miss out on some important accessories to fully capture that moment. You can swap the hairpieces out, but they don’t quite work well with the other expression.

Also included is an unmasked Darth Vader head sculpt to go along with the Sh Figuarts Star Wars Darth Vader About 155mm PVC & Abs-painted Action Figure. The head is really nicely sculpted and would look good with the figure, but it’s an unusual accessory to include with Luke. 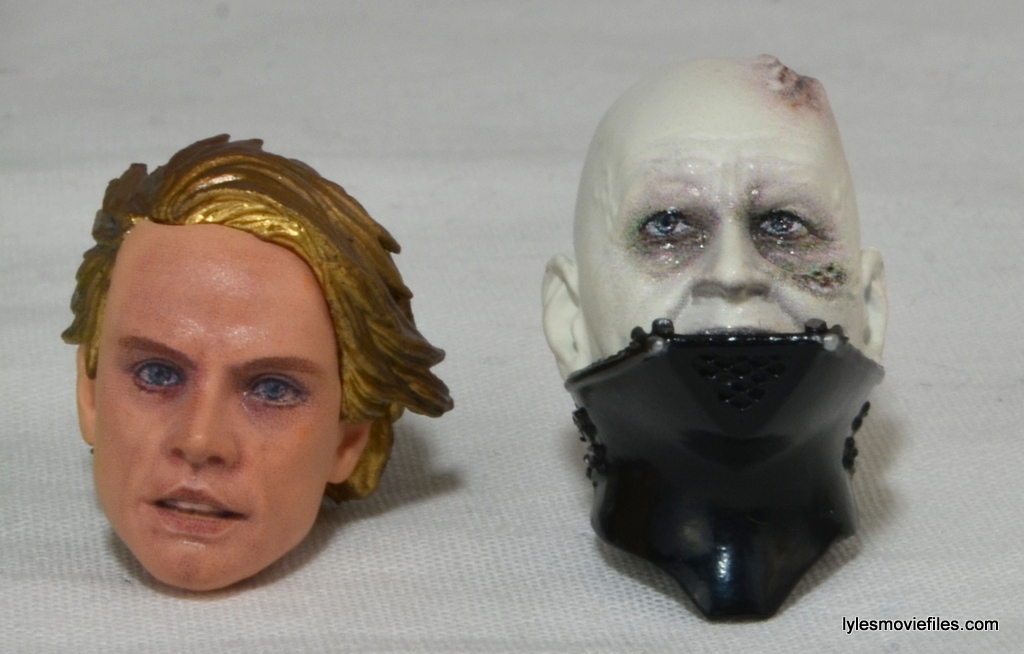 I’d rather they included a flap to simulate Luke’s final look after getting shocked by The Emperor like the Hasbro version: Star Wars The Black Series Luke Skywalker 6″ Figure

. And while I’m in the accessory request mode, I’d love to have gotten the vest and cloak Luke wore in Jabba’s palace as well as the Endor poncho and helmet to cover all of Luke’s Jedi attires.

Worth it? SH Figuarts figures aren’t cheap as they range anywhere from $50 to $60 to start and jump dramatically on the secondary market. Even without all the accessories I’d truly want in an ultimate Luke, I’m comfortable saying it’s worth paying more to get this one compared to the Hasbro version. 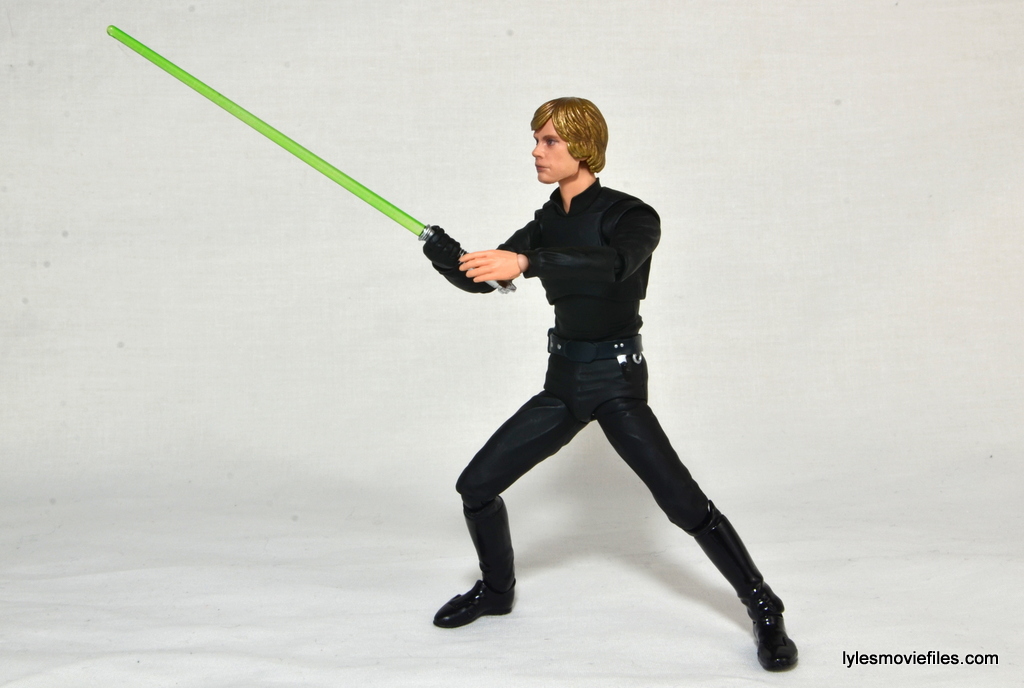 The gold hair and accessory choices hold the figure back from a perfect score, but this is an exceptional 6″ Star Wars figure. I’ve got a bad feeling about not being able to go back to Hasbro with Figuarts doing such quality work in this scale.

Where to get it? Lyles Movie Files’ affiliate partner Amazon.com has them in stock for decent prices. SH Figuarts Star Wars Luke Skywalker (Episode VI) about 140mm ABS u0026 PVC painted action figure