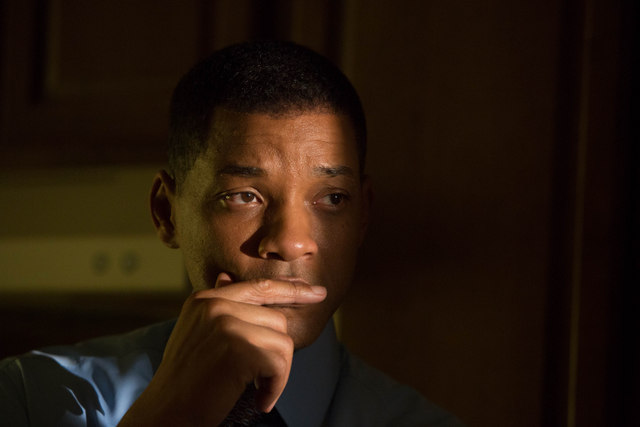 Beyond serving as an infomercial as to why parents shouldn’t let their kids get into football and wasting one of Will Smith’s best recent performances, the point of Concussion is very unclear.

What could have been a strong, thought-provoking look at the long-term effects of one of the more physically demanding sports and the mindset of those who play it is instead turned into a biased bore.

I question the approach as director/screenwriter Peter Landesman wants the audience to choose sides without a convincing argument from either perspective. Considering football is the new national pastime, it’s hard to see Landesman making many converts with his demonizing portrayal of the NFL.

Landesman‘s fervor to portray the NFL as this shadowy, clandestine organization “above acts of God” causes him to lose focus on the more important aspects of his film — the people. Concussion just isn’t personal enough to connect.

But unaware of the potential impact his findings have on the national pastime, Omalu is unprepared for the anguish and harassment that follows him and his supporters.

Omalu and the other characters are painted in broad strokes that offer little insight into the people who risked their careers and futures to make the NFL fess up to the potential long-term repercussions of the sport. If anything, Landesman downplays Omalu and his peers’ findings to make the film just another little man vs. big corporation story when it’s so much more significant.

The biggest travesty is Landesman completely wastes one of Smith’s best performances. Smith deserves to be on the short list for consideration to be nominated for this third Best Actor Oscar. Adding to his degree of difficulty, Smith gets the Nigerian accent down without it being distracting and he gives Omalu a sense of desperate earnestness that drives the film. With a better script, this could have been an awards showcase for him, but it’s a waste of Smith and a talented cast.

As Prema Mutiso (Gugu Mbatha-Raw, Beyond the Lights [Blu-ray]

) is introduced and subsequently relegated to an “as-needed” status, it’s apparent Landesman has little interest in developing Omalu’s courtship with his future wife. Mbatha Raw, superb even in this underdeveloped role, has strong chemistry with Smith resulting in the film’s best moments simply them interacting.

Still, Prema fares better than some characters like Stephen Moyer’s Dr. Ron Hamilton, Hill Harper as Christopher Jones or Paul Reiser’s Dr. Elliot Pellman, whose exact roles are never clearly defined. Landesman almost seems to assume the viewer is already familiar with all the players in this saga making for a jarring, frequently confusing experience. Luke Wilson is noticeably miscast as NFL Commissioner Roger Goodell, the one public NFL face the casting agents needed to get right.

Landesman relies on his go-to trick of players’ breaking down and eventually succumbing to CTE a little too often. The film desperately needed a rational voice from the NFL or a former player to present a reasonable conflicting point of view. Instead, all the players are painted as ticking time bombs waiting for their violent eruption and the NFL willingly enabling it with its lack of transparency and accountability.

At two hours, the film rarely feels like it’s making any headway and there’s a real sense that Landesman is just spinning his wheels. The film’s outcome, as even casual football fans are aware, is equally underwhelming without that satisfying sense of accomplishment that the little guy won for a change.

Concussion could have been that cinematic rallying call to demand more of the NFL. By vilifying the league so strongly instead of saluting the man who brought attention to this endemic, the film fails to provoke the discussion its filmmaker so desperately intended.