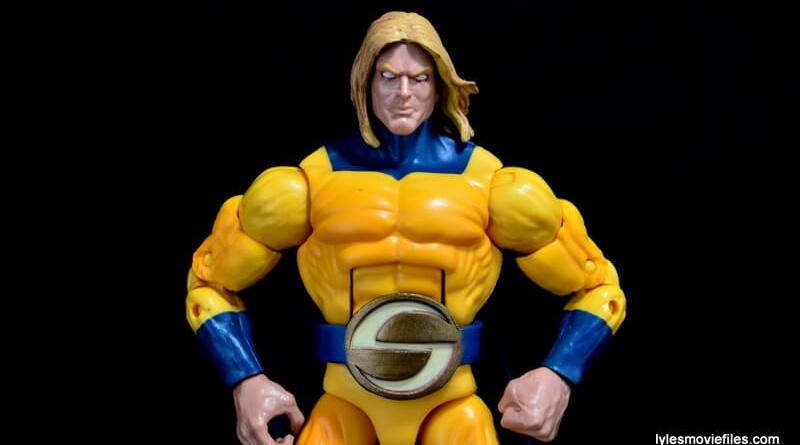 Sentry has kind of been a hard to love recent Marvel Comics addition. OK, fairly recent since he’s been around for 15 years already.  He’s a character I’ve really only enjoyed in his debut appearance by Paul Jenkins and Jae Lee.

The Allfather Build-A-Figure wave had some nice updates to classic characters in a strong 2015 kickoff for Hasbro, but Sentry was one I wasn’t all that excited about getting. Let’s see if the figure managed to change my mind.

Packaging: The red and black color scheme is fine for those who like a consistent MOC display. I still find it one of the more boring on the pegs. Sentry has to share side package space and the bio on the back with Machine Man, which is curious since casual collectors would probably need more information on them then Hawkeye or Thor.

There wasn’t any twist ties or rubber bands and Sentry came out of the package easily and the plastic wasn’t arranged to potentially damage or scrape any parts while getting him out. 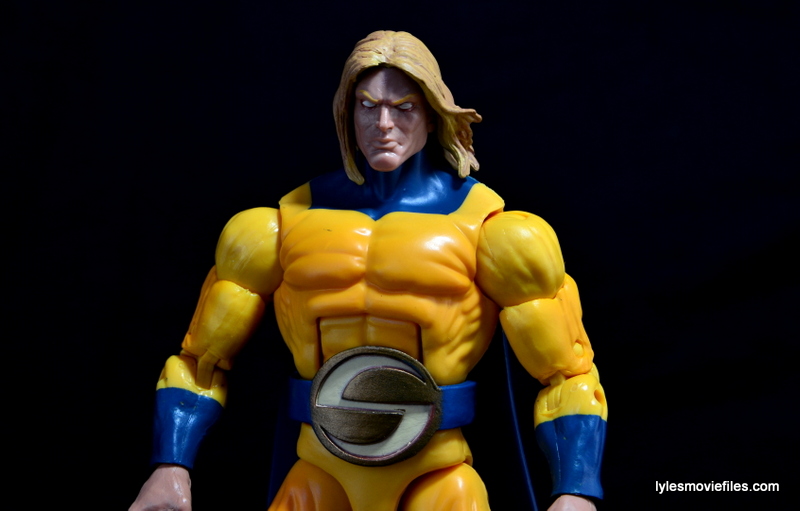 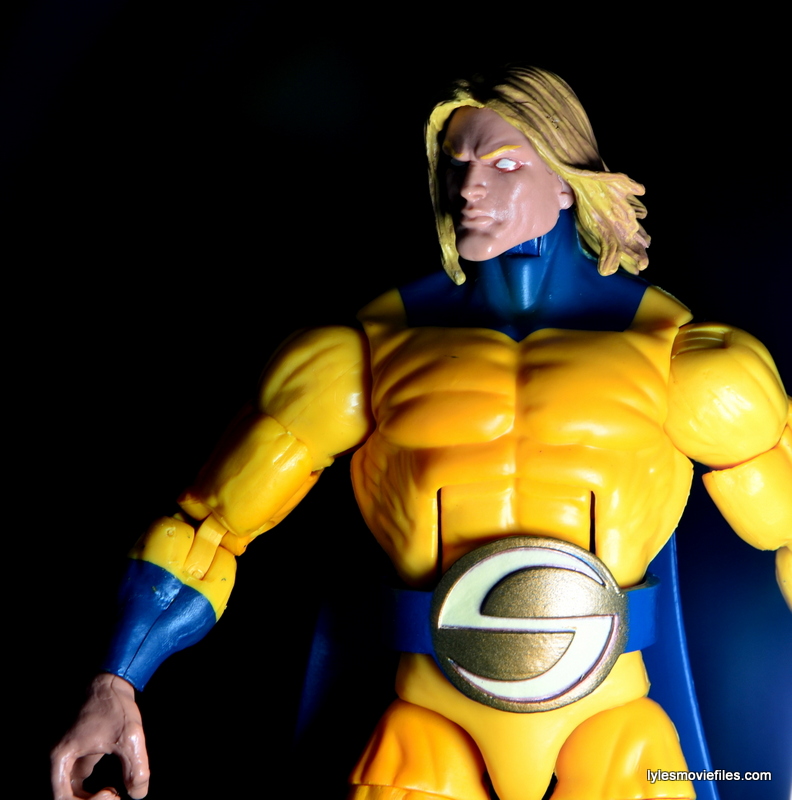 Likeness:  I’ve found Sentry to be one of the harder characters to see a consistent portrayal. His look varies depending on the artist despite a seemingly simple costume and look.

Sentry’s headsculpt is more intense and angry than I remember the character, but I’ve seen enough mad Sentry faces that this is fine.

I would have liked some sculpting for Sentry’s cape at the chest piece, but like the Toy Biz version, Hasbro opted to paint the chest area and attach the cape via plug in the back. It’s an odd look and doesn’t do the character much justice from a figure execution perspective.

And while typically, I’m also not a fan of the windswept hair. it makes sense in this case to allow for easier left and right movement. I would have liked if it flowed a bit more naturally over the head, but the hair is decent.

Scale: My knowledge of Hasbro bodies is spotty at best, but the use of the Hyperion body works well for Sentry. He’s taller than the normal sized characters, but not towering over them so much that he looks out of scale like wave mate Thor. 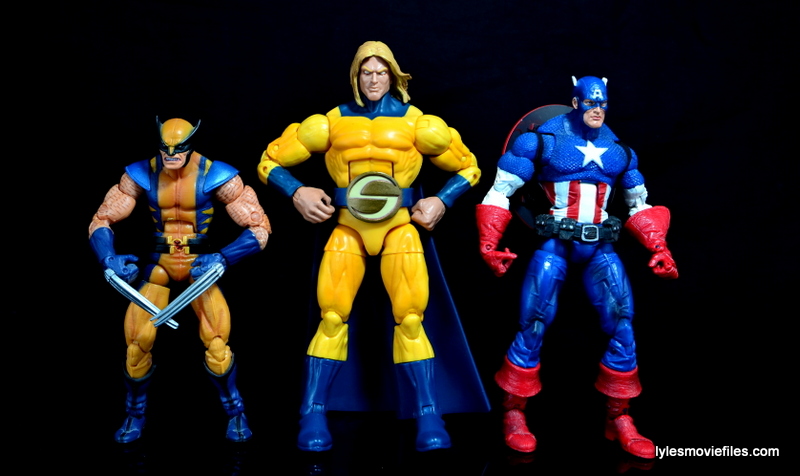 Paint: Sentry has a good amount of a yellow orange wash throughout the figure. Just like Iron Fist, it’s handled well without being overdone. I would have preferred a regular eye paint job instead of the whited out eyes though.

The paintjob is perfectly accurate to the source material, but I found myself far more drawn to the mustard/light blue color scheme of the Toy Biz figure. 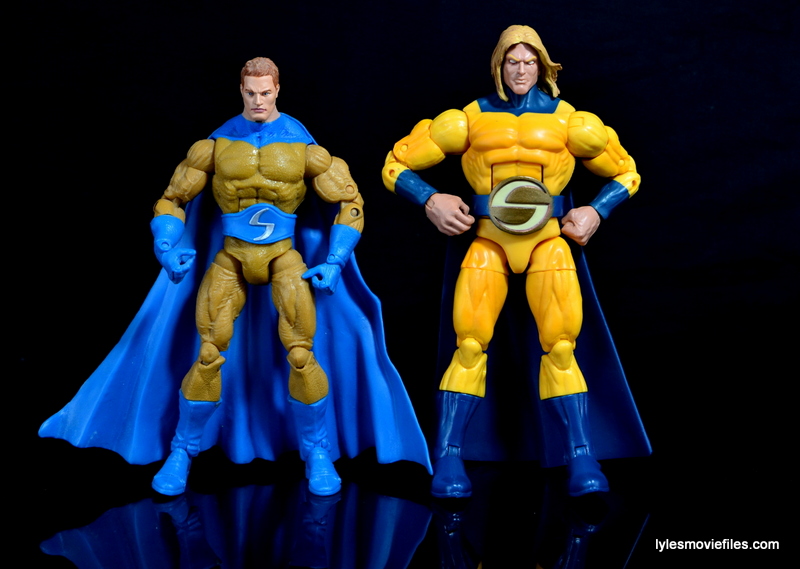 Articulation:  This is the category where Marvel Legends tends to pull away from their peers with a smooth, easy to maneuver articulation scheme that makes for fantastic toys. 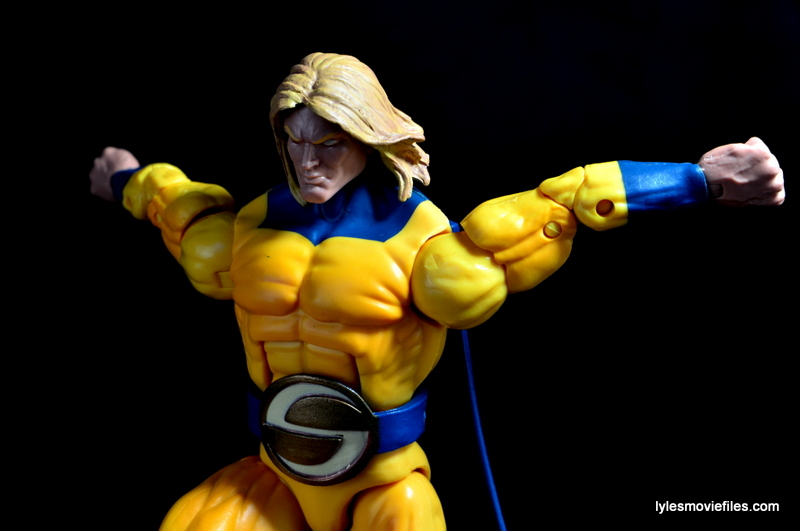 The belt restricts the waist articulation a bit. You can twist it just fine, but the belt unpins as a result. That’s an easy enough fix, but something that seems like it would become annoying over time.

In a issue we’ve seen common with the DC Icons figures, Sentry can’t really raise his head up enough to get us that perfect in-flight pose.

Accessories: This category finds Sentry pretty lacking. His sole accessories are removable costume parts with the cape and belt. The cape comes off a little easier than I’d like, but plugs into a hole in his back simply enough. It may be something worth putting a little superglue to keep in place more permanently.

Probably the selling point on the figure is the Build a Figure arms for The Allfather Odin. The right arm is the same as the ones that came with Machine Man, but the left is the bare arm unlike the Destroyer Arm of King Thor.

Worth it? I doubt I’d jump on this figure for Sentry alone. He’s a figure that benefits from the addition of the BAF parts. Currently he’s available for under $10 and at that price, he’s a much better deal. 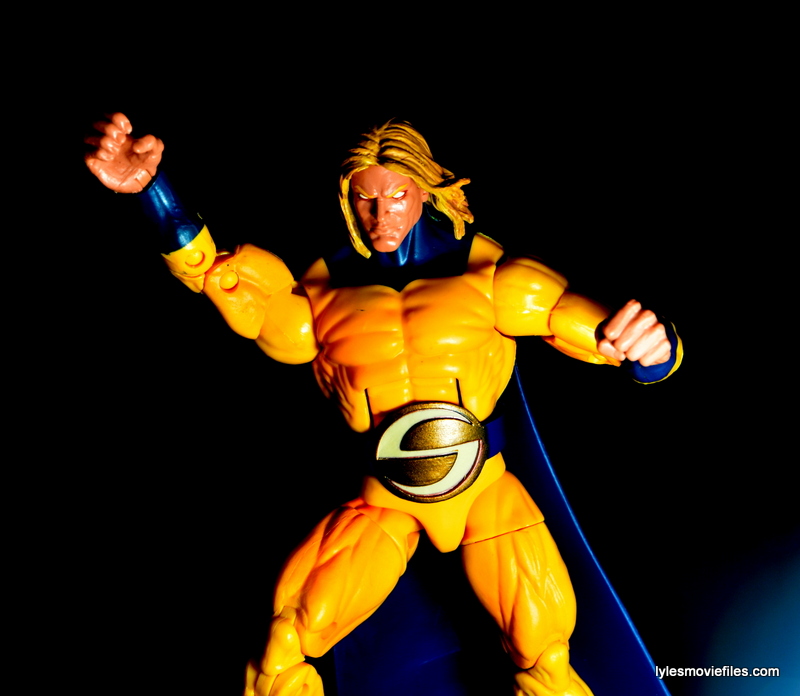 Sentry is a pretty good figure of a somewhat boring character. The cape execution is awkward, but otherwise I didn’t have any complaints of the figure itself. If you have an affinity towards the New Avengers teams, he’s more of an essential character. For folks unfamiliar with the character, he’s not going to be the standout of the wave. Still, he’s good enough you won’t regret having him in your collection.

Where to get it? Target and Toys R Us have some straggling figures from Series 1 so you might get lucky. Otherwise, Lyles Movie Files affiliates Amazon.com has him for $9.44, which you can grab here: Marvel Legends Infinite Series Avenging Allies Sentry 6-Inch Figure 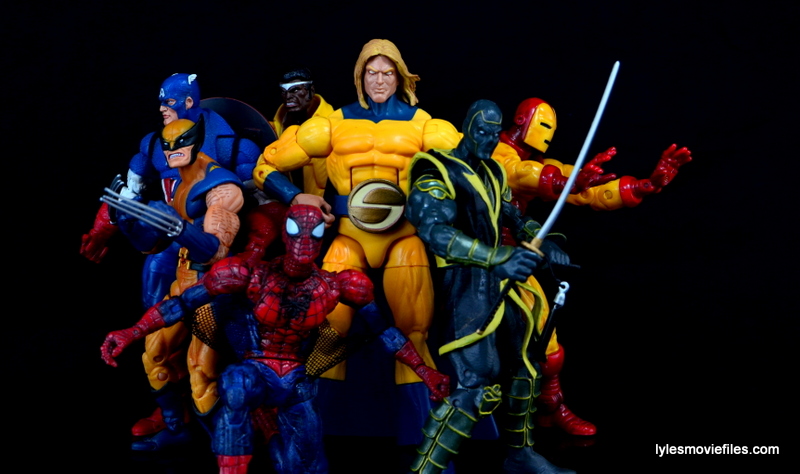