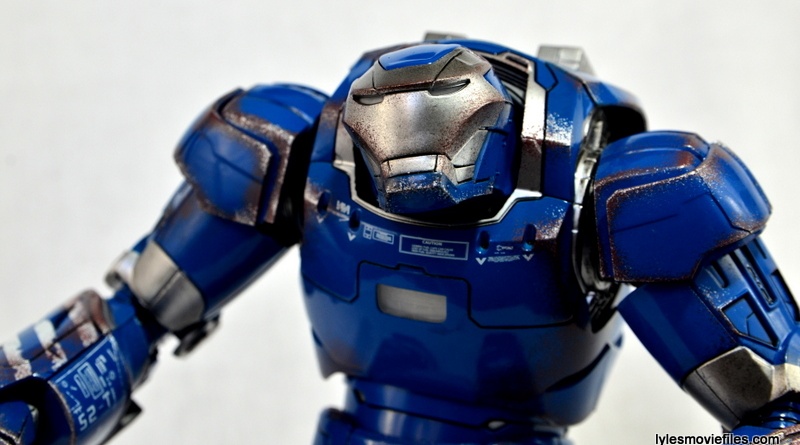 Iron Man 3 may have been my least favorite of the Marvel Cinematic Universe franchise, but it’s been a godsend for companies looking to tap into the certificate to print money that is the Iron Man license.

I’m not familiar with the work of Comicave Studios, but thanks to the fine folks at Bluefin, I was able to review the Iron Man Igor figure. If this is indicative of the quality of a Comicave product, I’ll need to pay a much closer eye on them in 2016.

Packaging: It’s not groundbreaking, but I liked the packaging. There’s a nice foil, reflective type material that catches the eye and gives a subtle hint of movement like Igor’s charging into battle. Courtesy of a small magnet on the inside, you can open the package up to see the figure in the tray before freeing him from his plastic prison from the top. 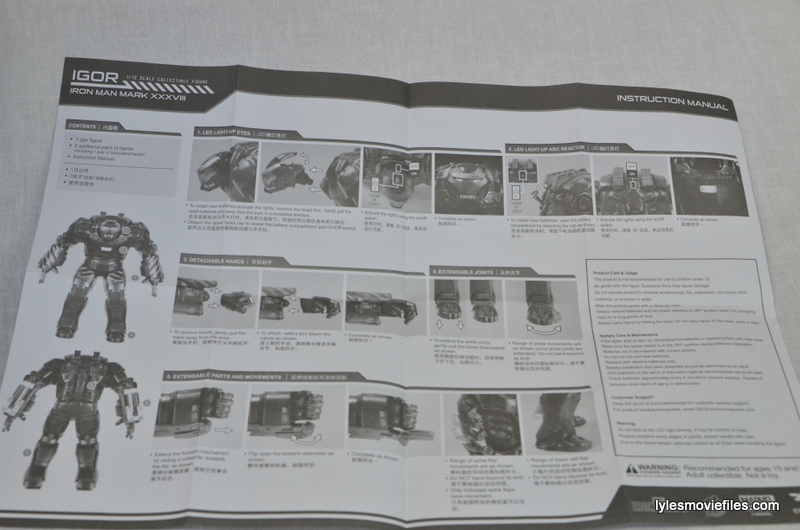 As you pull Igor out, you’ll immediately appreciate how heavy a 75% die-cast metal figure truly is — about four pounds — but don’t worry as the plastic has him secure enough that you will damage it. 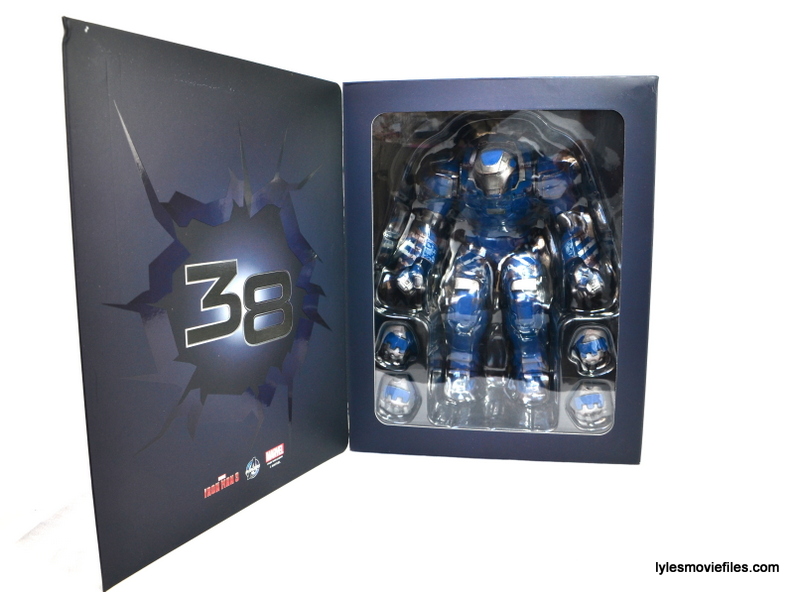 Likeness: Of the numerous Iron Man 3 armors, Igor seems to be one of the more popular having also been made by Hot Toys and as part of Hasbro’s Assemblers line. 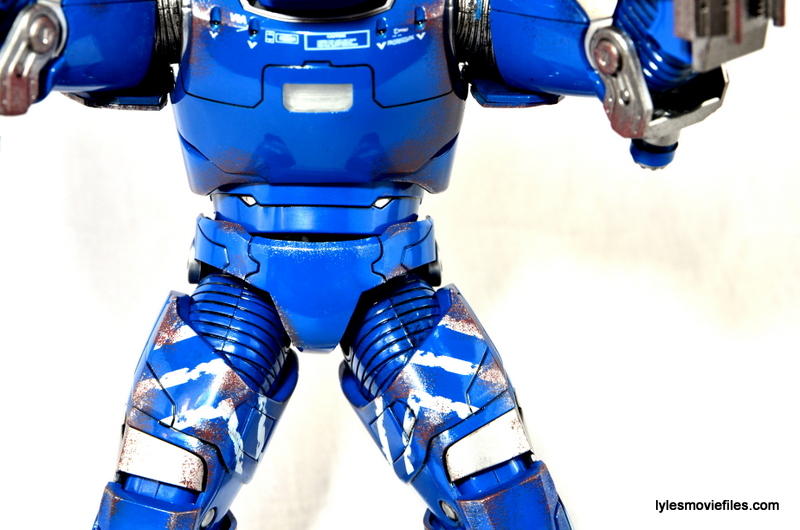 It’s easy to see why as it’s got a different color scheme from the standard red and yellow Iron Man armors and has that unique hunchback like its namesake. I’m not entirely sure if it was unintentional, but I got a kick out of the stomach area “face” in the middle of the figure. 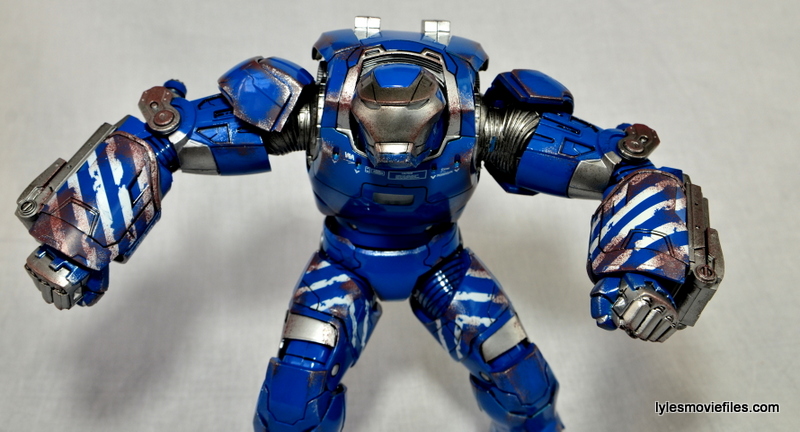 From its blink and you miss cameo in Iron Man 3, judging the figure’s accuracy is a tall order, but it has the defining characteristics of the armor with the hunched, sloped back, wide arms and protruding helmet befitting a heavy lifting suit of armor. 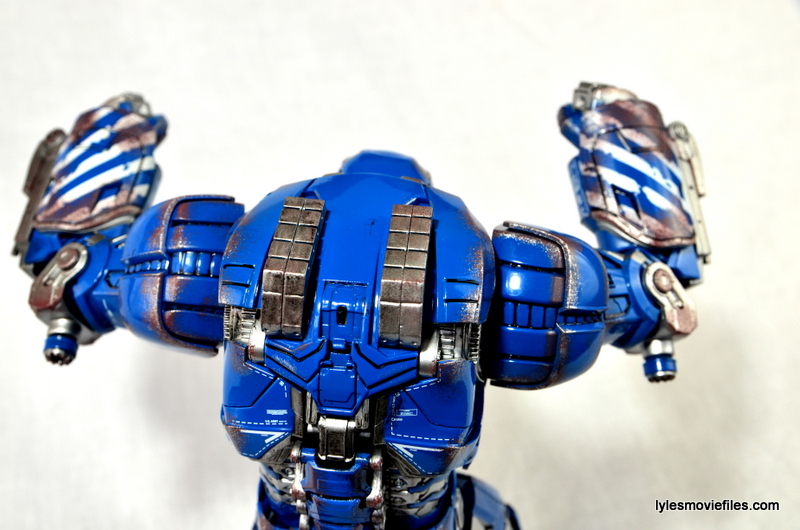 On the back, you can really appreciate all the (not-so) moving parts that comprise the armor. The exoskeleton spine featured some very intricate detailing and was one of the highlights for me.

Scale: While I don’t have any other Comicave figures, I was psyched to find Igor worked perfectly for my Marvel Legends figures at his 8″ height. That’s a nice bonus as I wasn’t quite sure if I’d have to have Igor as a standalone since he wouldn’t fit in another collection. 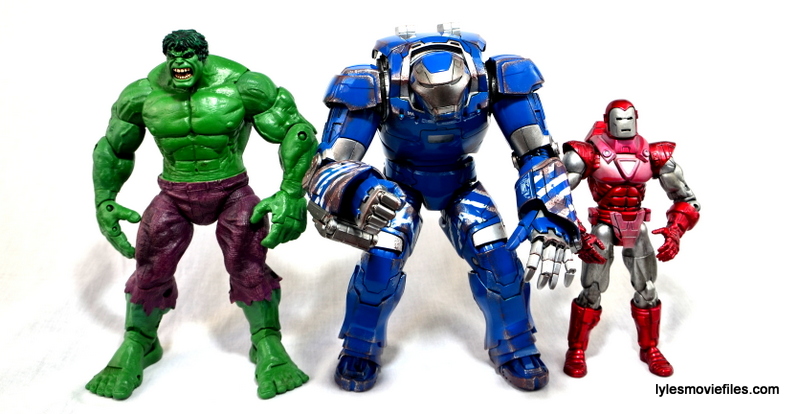 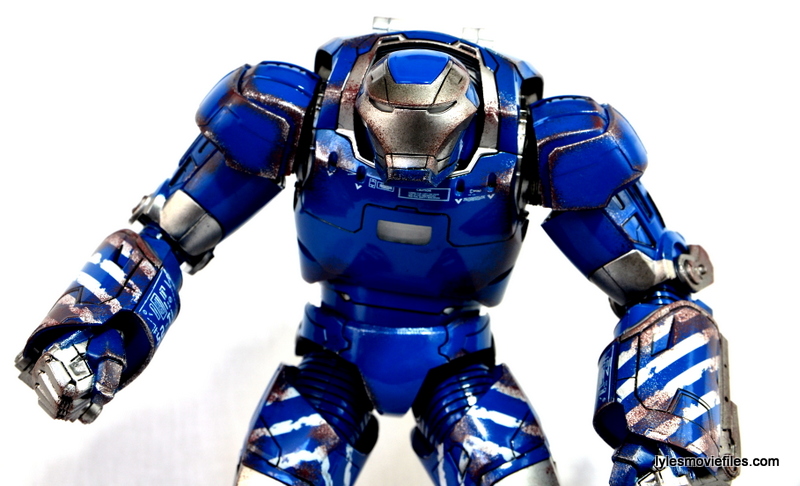 Paint: This might be my favorite aspect of the figure. It’s more than me being a sucker for pretty much all things blue, which helped in all fairness. It’s a strong, vibrant shade that’s striking. Exactly what you want to break up all that red and gold in your Iron Man armory.

The white “camo” strips are appropriately not as neat and polished and the lettering for the various parts is nice and sharp.

Beyond that, the figure has numerous bits of airbrushed dirt and grime. It’s not overdone and does a tremendous job of capturing the look of caked on dirt you’d find on an old car. This isn’t one of the armors Tony’s wearing when he wants to impress the ladies. 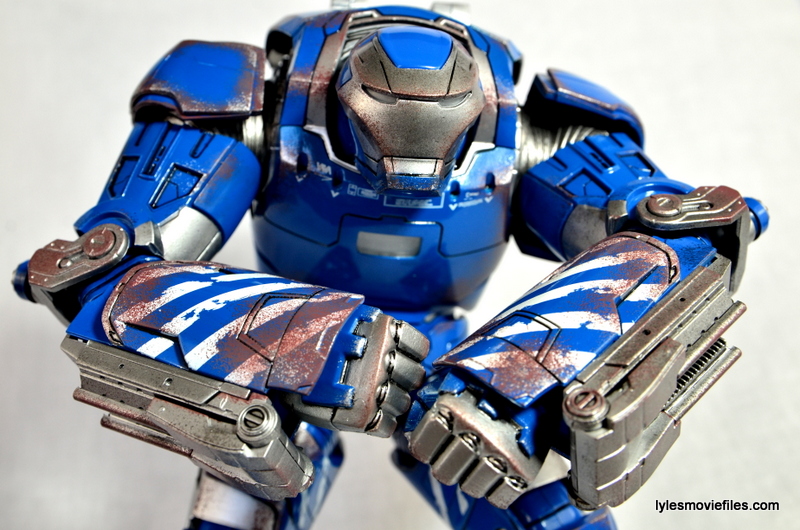 Articulation: Surprisingly for a hunchback suit of armor, there’s a pretty good range of movement. 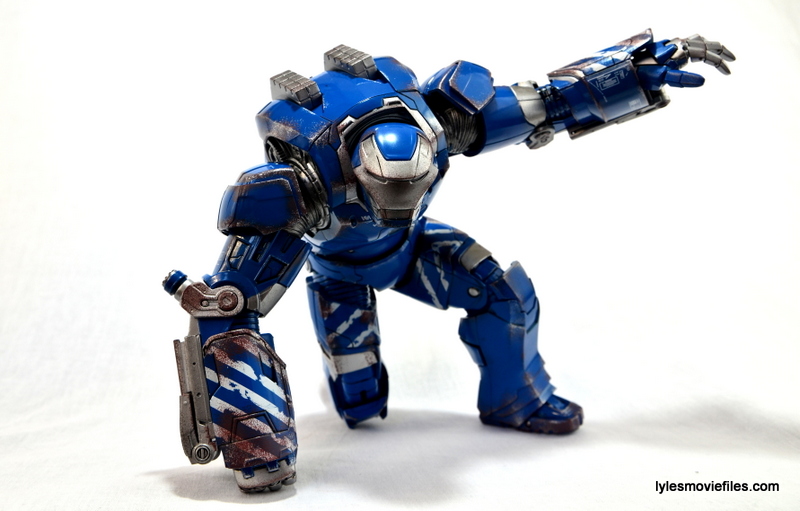 Keep in mind Igor isn’t supposed to stand fully upright, the hunched over look is the most natural, but Igor can hit many of the traditional Iron Man poses. Most impressively, the fist pounding the ground signature pose.

Igor’s got a lot more poseability than you might initially expect and I had a ton of fun exploring the various options. Comicave says the figure has over 60 points of articulation and with the multi-layered approach with the armor paneling, that sounds about right to me. 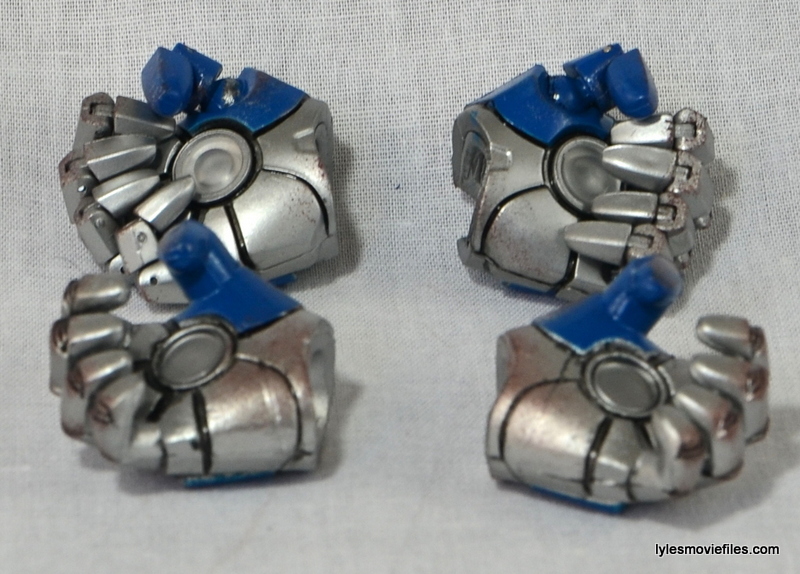 Accessories: Igor comes with two extra sets of hands. One is a grabbing pair and the other is a repulsor hand complete with articulated fingers.

Of the six hands, I only had a problem with the right opening hand as it failed to stay closed. That’s somewhat troublesome as you could easily lose some fingers if you weren’t paying attention. It should stay together and not come undone with a little superglue.

While not necessarily an accessory since they’re not removable, Igor has some mini fork-lifts under the arms. They’d be perfect if they extended out just a little further to clear the hands. 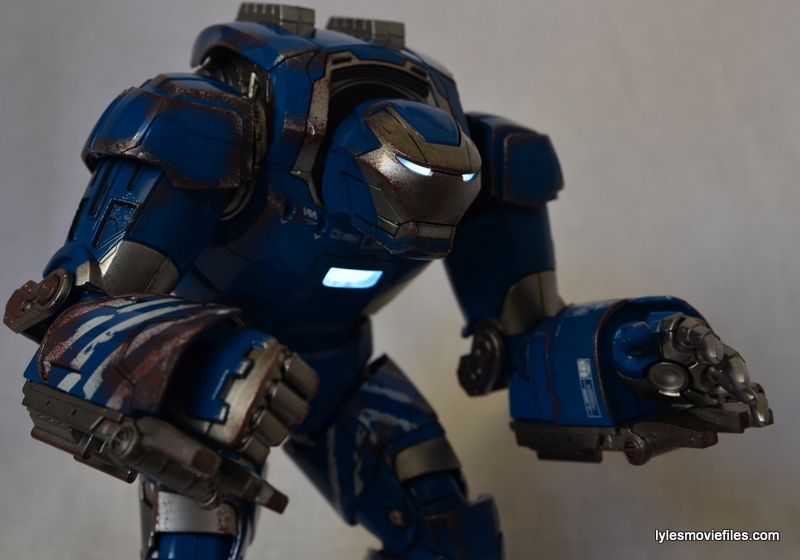 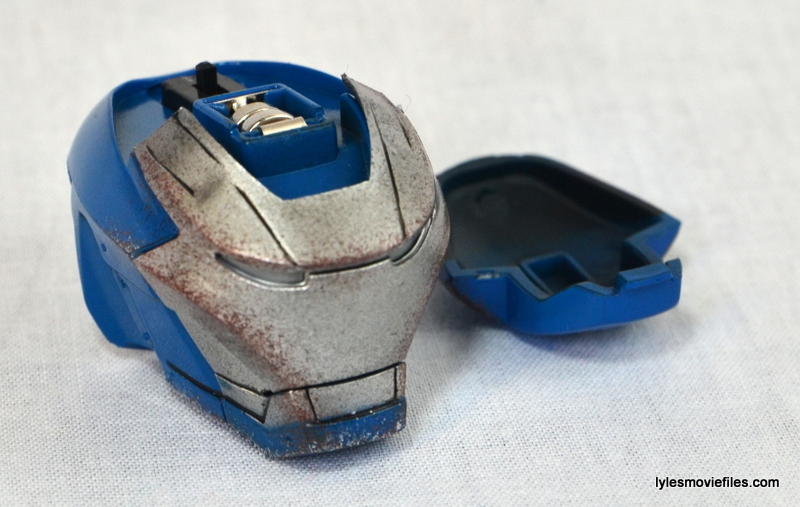 Light-Up: If you weren’t already impressed, Igor also has a light up feature in the head and Arc Reactor. The head easily pulls off to uncover the switch for the helmet while the Arc Reactor switch is on the back. The lights are fairly strong and lit up well in daylight and are even better in low light.

Worth it? At $189, this isn’t a cheap figure by any means, but considering the overall cost of the alloy in place of plastic, paint job, articulation and LED features, it’s hard to say you’re not getting your money’s worth. The Hot Toys version albeit another 6″ taller, clocked in at $509 before shipping if you really want some sticker shock. 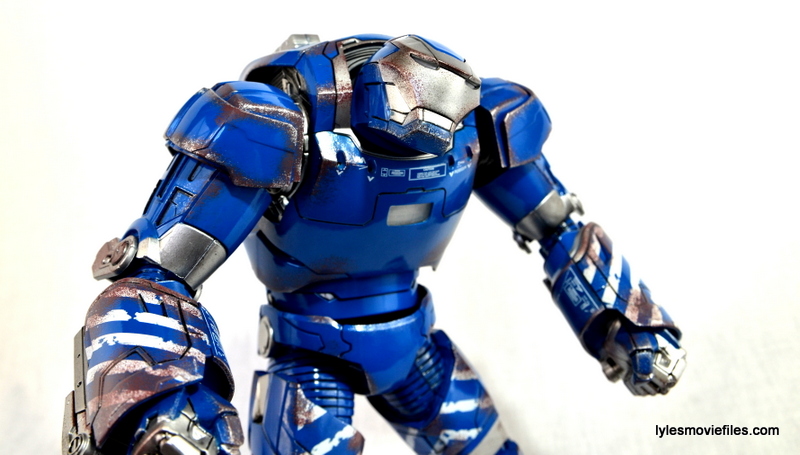 This was a nice out of nowhere surprise from a figure I didn’t even have on my radar a few months back. The finger hands are a bit worrisome, but this is a superior die-cast figure and a must-buy for Iron Man fans who want a wide array or various armors in the 6″ scale.

Where to get it? You’re going to need to order Igor online whether from Bluefin or Lyles Movie Files affiliate partner Entertainment Earth, which currently has him available for pre-order with free shipping:  Order Iron Man Mark 38 Igor Super Alloy Die-Cast Action Figure from Entertainment Earth!