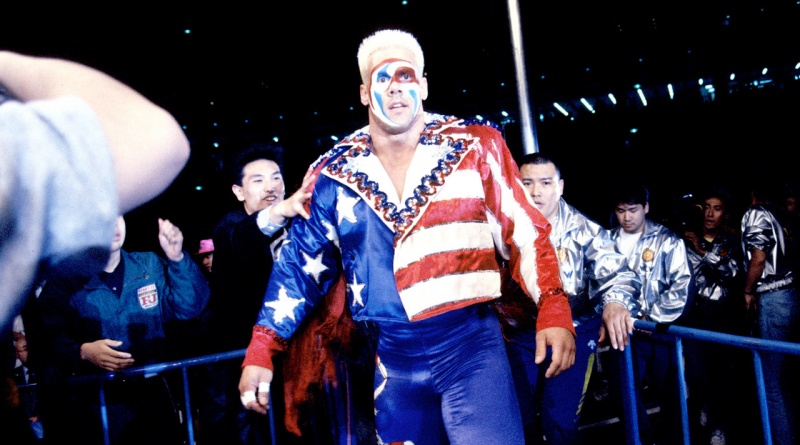 Considering Sting’s induction to the WWE Hall of Fame this week, I figured now was as good a time as any to break out a new feature — Best Year Ever. Basically, I’m going to look at a wrestler — preferably winding down their career or retired — and make the case for their best year of wrestling.

Typically, that best year revolves around winning a major title, but in some cases, it may just be an amazing feud, series of matches or that one spectacular moment everyone immediately thinks of when considering that wrestler. For Sting, that year is undoubtedly 1992.

Let’s paint the picture a bit. Already a seven year veteran and former NWA world champion, Sting finally was the unquestioned franchise at WCW. His mentor Ric Flair was headlining WWF pay-per-views; his peer Lex Luger was wrapping up his contract to join Vince McMahon as well and Hulk Hogan was still two years away from dominating the WCW landscape. For Sting, the time was now to have a signature year and he delivered.

Sure, in terms of popularity, Sting was never more over with the fans than 1997 when he spent all but one match in the rafters while stalking the nWo. But none of that would have mattered were it not for the tremendous foundation Sting built in 1992. This was the year Sting battled legends like Ravishing Rick Rude, Steve Austin, Cactus Jack, Big Van Vader, Lex Luger, Jake ‘The Snake’ Roberts, Arn Anderson and ‘Beautiful’ Bobby Eaton. 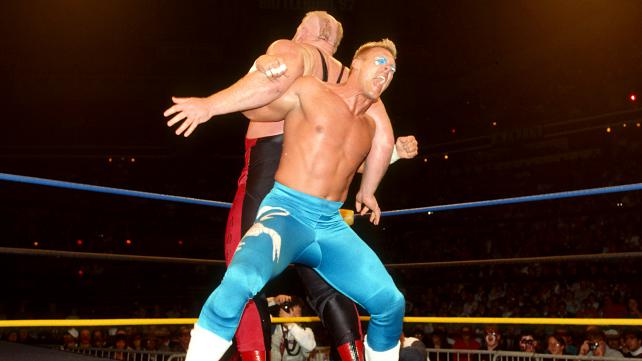 Beyond the ongoing rivalry with Rude and Cactus Jack, this marked the year of Sting’s greatest challenge. Not long after he defeated Luger, the upstart Big Van Vader burst on the scene after a tour in Japan and badly injured Sting’s ribs. Then he went on to beat Sting for the WCW title. While in Flair, Sting had a dastardly opponent willing to break every rule to beat him, Sting could physically overpower him. With Vader, Sting played David to Vader’s Goliath marking one of the few times in his career that Sting was the physical underdog. This led to many outstanding match-ups throughout the next two years and it all started in 1992.

There are some more obvious choices here and the payoff was underwhelming, but this was definitely the most shocking. Sting was all set for his title rematch against Vader when he was ambushed by Jake ‘The Snake,’ who hit the DDT and put Sting out of action. That led to one of my all-time favorite moments as a wrestling fan with Ron Simmons winning the random draw to face Vader and win the title to become the first black WCW champion. Beyond that historic aspect, Sting vs. Roberts had all the makings of a classic, long-term feud, but it petered out after one singles match at Halloween Havoc. 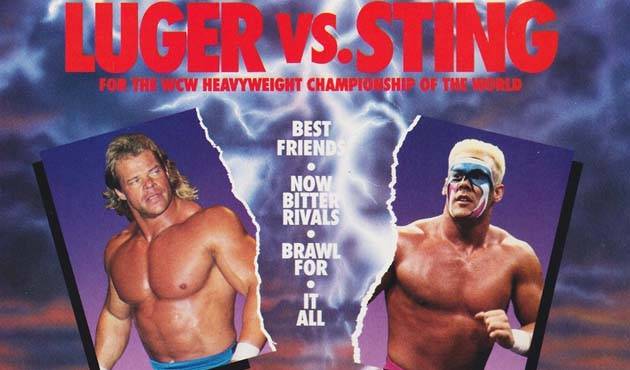 Winning his first WCW title at Superbrawl II. Even though it’d been a year since he was the world champion, Sting had since become bigger than the belt just like John Cena in 2015. But it was time for WCW to give Sting the world title reign he deserved. Even before everyone had such ready Internet access there were rumors Luger would be departing following this match. While it didn’t evolve beyond the great face Sting/heel Luger encounters from 1989, Sting holding the title was a big moment as it signaled his return to the top of the promotion in every regard. 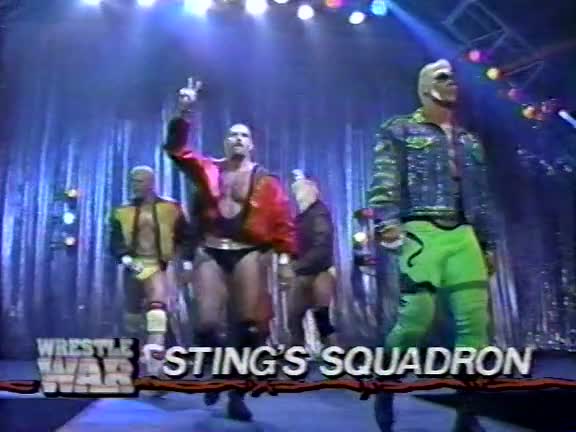 War Games 92 — [WrestleWar 92 – May 17, 1992) On a short list of best WCW matches this is right near the top and probably the best that didn’t feature a cruiserweight. It’s one of my Top 5 matches period as well so if Sting didn’t do anything else in 92, he was involved in a legendary match. Sting led Ricky ‘The Dragon’ Steamboat, Barry Windham, Nikita Koloff and Dustin Rhodes into war against the Dangerous Alliance. The 1987 original was a classic, but this version featuring 10 wrestlers and no managers marked the best incarnation of the gimmick match and Sting stood tall at the end leading his team to a bloody and hard-fought victory. This was one of the few feuds in wrestling to have a proper blow-off and a fitting conclusion to one of WCW’s best storylines.

Beach Blast — [Bash at the Beach – June 20, 1992] Immediately after dispatching the Dangerous Alliance, Sting went on to settle another score with a longtime rival in Cactus Jack culminating in a falls count anywhere match. In his book, Have A Nice Day: A Tale of Blood and Sweatsocks

, Mick Foley was so proud of the match that he declared it his favorite of all time. Sting would occasionally call to make sure even when he went to ECW and WWF that their match remained his favorite, which it did until Foley clashed with Shawn Michaels at Mind Games in 1996. 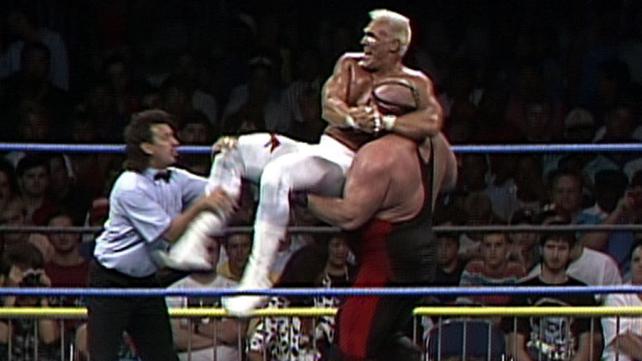 Great American Bash — This may be the most one-sided match I’ll ever put in this category. Vader was an unknown commodity to WCW fans, having only really feuded with El Gigante and destroying The Z-Man. Few expected him to be a serious threat to Sting’s title reign, especially so early into it. In one of the best booked matches to immediately create a new star, Vader demolished Sting to the shock of the fans. But despite Vader’s onslaught, it was Sting’s reckless style that ultimately proved his undoing. By the end of the night, WCW had a new champion monster heel and Sting found a brutish, domineering rival that would plague him for years.

Clash of Champions XX [September 2, 1992] — Oddly this was one of the rare times WCW bothered with an elimination match, presumably content to let the WWF have that gimmick with the Survivor Series. Sting teamed with his longtime pals the Steiner Bros. and Nikita Koloff to battle Vader, Super Invader (Hercules Hernandez in a mask), Rick Rude and Jake Roberts. It’s not the classic as the other three, but a fun elimination match that shows Sting battling it out as the hero fans always viewed him as in 1992.

Starrcade 92 [December 28, 1992] Sting battles Vader in a King of Cable matchup that proves Sting is more than capable of winning the big one against his biggest foe. 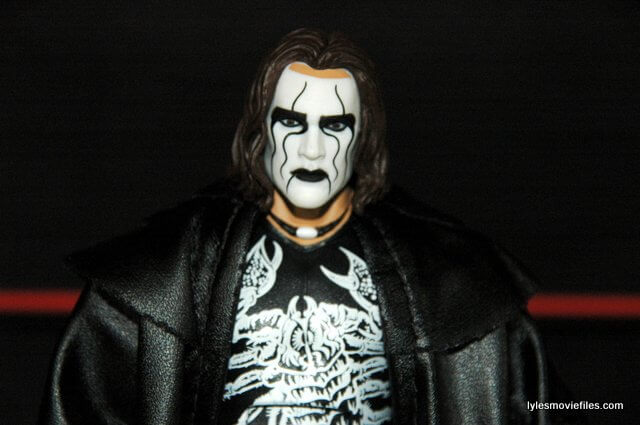 Check out the figure review here.