The big announcement that Steve is returning to his old identity was initially revealed on ABC’s Captain America: 75 Heroic Years special.

“It’s an exciting time to be writing Captain America, for sure– this year is the character’s 75th Anniversary, not to mention the upcoming release of Marvel’s CAPTAIN AMERICA: CIVIL WAR. And with CIVIL WAR II approaching in the Marvel Universe, it felt like the perfect time to restore Steve Rogers to his former self,” says series writer Nick Spencer.

Recently drained of the Super Soldier Serum that gave him his strength, speed and endurance, Steve Rogers was no longer fit to wield the shield and he passed the title of Captain America to his closest ally, Sam Wilson, a.k.a. Falcon. So what happens to Sam Wilson now that Steve has returned? Enemies of freedom beware – there are now two Captain Americas protecting the people!

“CAPTAIN AMERICA: STEVE ROGERS and CAPTAIN AMERICA: SAM WILSON will act as great counter-points to one another,” continues Spencer. “If you’re digging the topical, ripped-from-the-headlines approach we’re taking in Sam’s book, we’ve got plenty more of that to come. And if you’re up for a more timeless take, with Captain America facing off against Hydra and his classic rogues gallery, Steve’s book will be just the thing for you.”

Seems like the focus on the new book is Steve battling Hydra, which is interesting as that’s the space Agents of SHIELD occupies so well in the TV/Movie realm. With the new Agents of SHIELD comic book recently arriving, it’ll be interesting if they’ll be a lot of synergy between the two books. 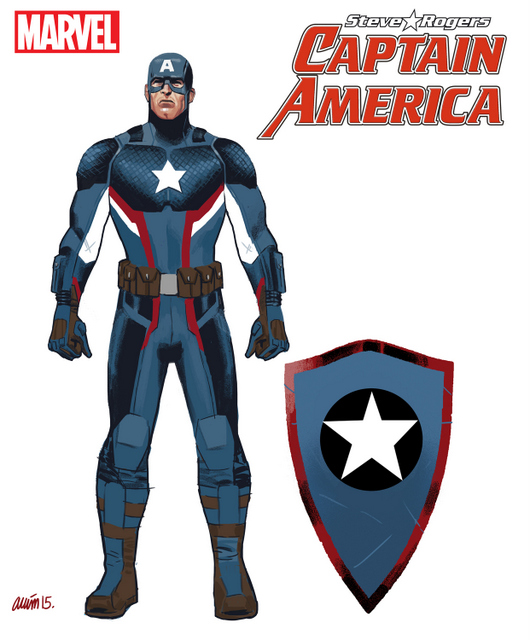 While I definitely welcome the return of Steve as a young man and back as Captain America, I’m just not a huge fan of the new costume or shield. It’s too much periwinkle and not enough red and white. The problem with Cap’s costume is that much like Spider-Man, you can’t really improve on it. While both got neat black variant outfits for a while, creators keep going back to the original because it works. As it stands now, Sam Wilson has the best Captain America costume and that worked as a distinct Falcon-inspired take on the classic attire.

In a world where we have thousands of Green Lanterns, I’m just fine with both Sam and Steve Rogers running around as Captain America. And at least Sam/Falcon America has the better shield.

What do you think of the new look?