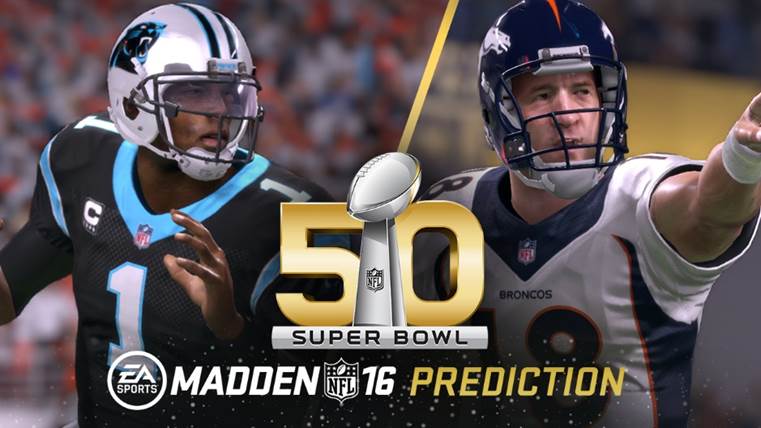 As a Niners fan, I have no horse in the race in this year’s Super Bowl — I’m just glad it’s not New England and Seattle again.

EA Sports revealed the winner of the Madden NFL 16 Super Bowl prediction and for Carolina Panthers fans, there’s some good news as the simulation predicts they’ll beat the Denver Broncos 24-20. EA has set up a Madden NFL 16 Super Bowl Prediction Hub where they’ll be able to simulate their own Super Sunday. Following the game, players are invited to share their game result with the hashtag #MyMaddenPrediction.

According to the official simulation, Carolina began the game with a 10-0 lead before tacking on another 13 points to close the half.

Facing a 17-point deficit at halftime, Peyton Manning decided he wasn’t going to let his Super Bowl legacy be defined by two blowout losses and rallied the Denver offense. The consummate playmaker, Manning began dissecting the Carolina defense, capping off a 3rd quarter drive with a touchdown toss to Emanuel Sanders. Denver’s defense also responded, with Aqib Talib picking off Cam Newton and setting up a Broncos field goal. Denver continued their scoring explosion, adding another filed goal and pulling to within 17 – 13.

Denver kept the momentum rolling in the 4th, with Manning finding Demaryius Thomas for another touchdown, putting Denver up 20 – 17. Cam Newton wasn’t done writing his own Super Bowl legend though, putting the team on his back and scoring a game-winning touchdown with a determined goal line scramble. After a wild and emotional game the Panthers stood victorious, claiming Super Bowl 50 by a score of 24 – 20. 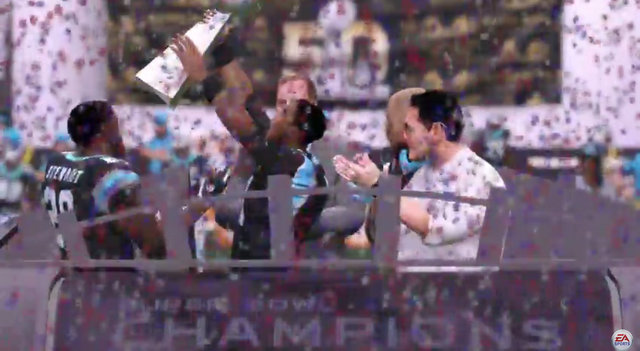 After a thrilling contest, Cam Newton claimed the Super Bowl MVP Award, completing 19 of 26 passes for 216 yards with one touchdown and one interception. Jonathan Stewart added a touchdown of his own on 47 rushing yards, with Greg Olsen tallying 79 receiving yards and catching Newton’s only TD pass. On the defensive side, Josh Norman led the Panthers with 6 tackles and one interception.

This simulator isn’t something to blow off as it’s gotten 9 out of the last 12 Super Bowl winners right. Last year was even more impressive on the prognostication as it got the final score, Tom Brady’s MVP, New England’s 10-point third quarter deficit and Julian Edleman scoring the winning touchdown. Edleman’s stats were just slightly off as the game simulated he’d get 8 catches for 106 yards instead of the actual 9 receptions for 109 yards.

For more info on the game visit: https://www.easports.com/madden-nfl/superbowl-50