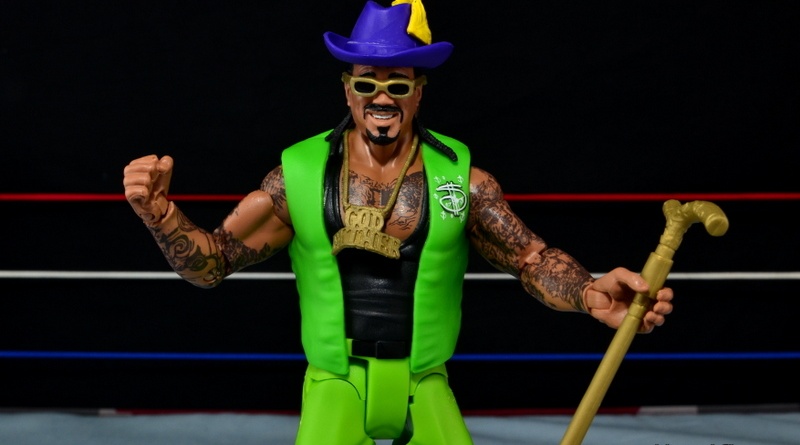 It’s time, once again, for everybody to come aboard the figure review train.

Charles Wright has been a WWF fixture since the early 90s originally debuting as Papa Shango in a feud against The Ultimate Warrior. But it wasn’t until a few more gimmicks later that he found his most beloved character, The Godfather, which Mattel immortalized in the Elite 39 wave. Let’s see if it’s worth climbing aboard or if the figure is better off ditched on the tracks.

Like a lot of straight males, The Godfather was a perennial favorite during The Attitude Era. It wasn’t because he had charisma like The Rock, could brawl like Stone Cold, could take a beating like Mick Foley or even because of his amazing wrestling ability. Nope, pure and simple it was for this:

Oh sure, this was the absolute definition of non-PC, but considering the scantily-clad eye candy The Godfather brought out every week, who was gonna complain?

Packaging: The new Elite packaging is probably my favorite currently on the market for this scale. It’s dynamic with a great red and grey color scheme, large window to show off the figure and accessories and multiple reference pictures. I’d still like a little more info on the bio card, but even still, this line has more than most of its 6″ counterparts — looking at you Marvel Legends, DC Icons and Star Wars Black.

The bio info is a little off on his debut though as Godfather didn’t show up until well in 1998 at the peak of the Attitude Era, not 1994. A pimp wouldn’t exactly have flown during the New Generation Era. 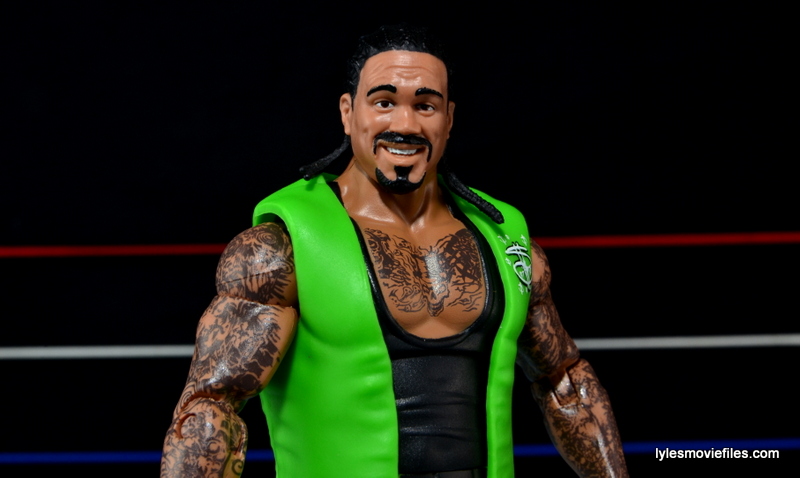 Likeness: Some guys like Sean Waltman never seem to get a good sculpt, while others like The Godfather pretty consistently have great ones. This figure is no different seemingly capturing him right in the middle of his pre-match promo.

The expression has a lot of character and is one of those rare times going with a non-neutral expression works. The hair braids are nicely sculpted as well.

The size is right for the figure as I’m assuming the top half is a direct reuse of the Papa Shango figure as I don’t recall him adding tattoos from his earliest WWF gimmick to that one.

Scale: At 6’6″ Godfather stands taller than the smaller size guys, but will still need to look up at the giants like Sid and The Undertaker, ironically the latter is one of Wright’s closest friends.

Paint: There’s not a heck of a lot of instances for paint screw-ups here thanks to Mattel molding the outfit in the respective color. Unlike the jeans mold, Godfather’s pants don’t need any shading and look fine. Ditto for the eyes. This is as minimalist a figure as you can get in this line, but considering the character, it’s not an issue.

From an aesthetic standpoint, I wish Mattel mixed the colors up a bit to reflect the character’s more colorful demeanor and went with an orange vest instead of green. While Godfather did go with matching pants and vests, more often than not he had mismatched colors throughout. The $ sign on the front looks right although I am a bit disappointed Mattel didn’t do something on the back even if it was something simple like “It Ain’t Easy!”

Articulation: I love the Elite articulation scheme especially for figures whose repertoire didn’t require intricate submission moves. That said it was more than a little annoying to open Godfather and find he was a victim of the floppy chest. Spotty paintwork can be annoying, but it’s something you can make the best choice. There’s no such option with loose joints and the chest joint is the hardest to tighten up with super glue. Basically until I do that, the figure will be leaning backward or forward.

Godfather doesn’t have the usual hip articulation of the regular Elite figure since he has the pants mold. It’s more like the DC Classics figure, but it works just as well. In all honesty, Godfather wasn’t exactly doing flips and dives so he’s one of the characters you won’t have any problem simulating his moves including his finisher The Ho Train. 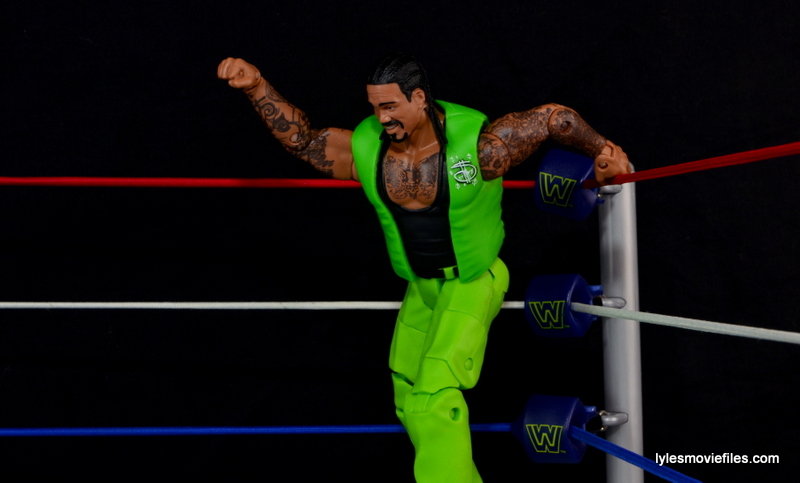 Accessories: Mattel covered all the essential elements with the figure. He comes with a purple hat complete with yellow feather, a necklace, sunglasses, a cane and a removable vest.

The cane is really the only accessory that would benefit from some paint even if just the handle was silver so it didn’t look so much like a toy. Short of including a couple of his working women, there’s not much else you could ask for here. I’d managed not to lose the “fur coat” that came with the WWE Classic Superstar Collector Series #9 The Godfather 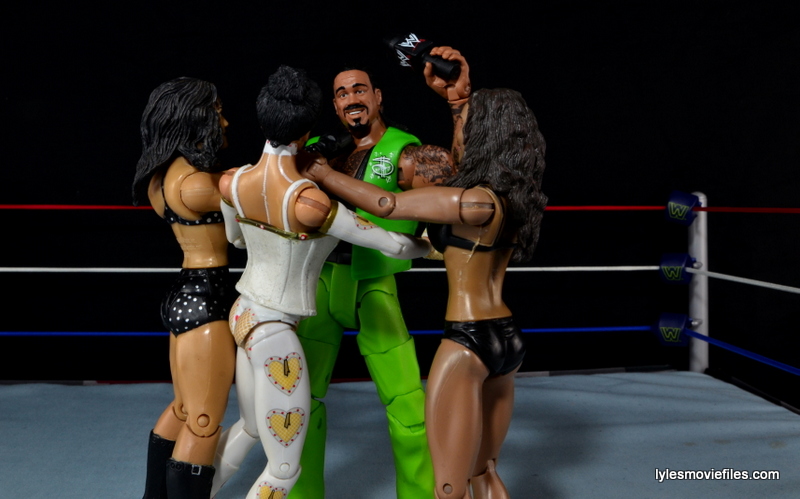 Worth it? This largely depends if you were a fan of the character back in the Attitude Era. Godfather wasn’t involved in any pivotal angles or must-see moments during that time frame in this gimmick so it really comes down to your preference. Besides an orange vest there’s nothing more I’d ask for with a Godfather figure and if you’re a fan, the $20 price tag seems perfectly fair.

Wright now has two of his signature WWF gimmicks in the Elite line and I’m definitely hoping a Nation of Domination version is imminent to go along with The NATION OF DOMINATION (THE ROCK & FAAROOQ) – WWE ELITE FLASHBACK EXCLUSIVE 2-PACK , but I’d be just as willing to buy a Kama Supreme Fighting Machine and Right to Censor Good Father figures as well.

This probably won’t be the top of anyone’s must-have list, but this is a very well done figure that perfectly captures the character with no shortcuts on accessories and part choices. 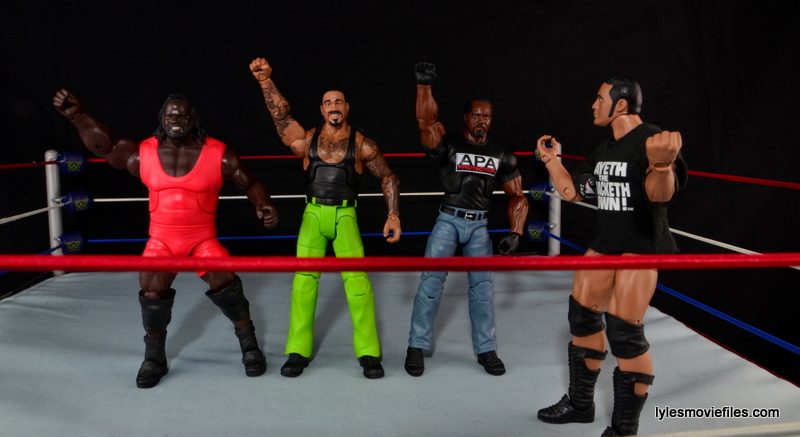 Where to get it? Elite 39 is just now starting to show up at retailers like Toys R Us and Walmart, but if you don’t feel like searching you can always check out Amazon.com using the following links: