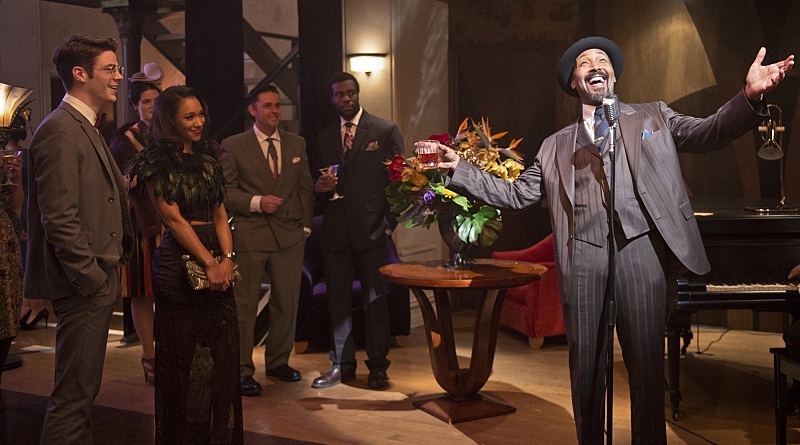 Tonight’s episode proved definitively that The Flash is capable of exploring and excelling at bringing the full comic book experience to life. In a series that’s already had a number of fanboy geek-out moments, this may have been the satisfying as it suggested we haven’t seen nothing yet.

After The Flash closed the Earth-2 portals, Barry, Wells and Cisco took the final portal to Earth-2 in hopes of tracking down Zoom and rescuing Wells’ daughter Jesse. 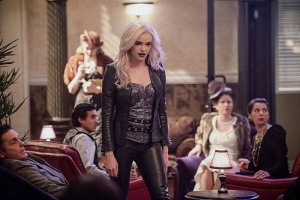 The ride to Earth-2 offered some tantalizing teases including brief glimpses of Supergirl, a Legion of Superheroes flight ring and presumably Jonah Hex. That those are all valid arenas in the DC universe for the CW characters to explore is incredibly intriguing as the possibilities now seem endless for this series. Once again I’m left wondering how the movie version of The Flash can possibly hope to compete with a show that regularly pushes past the limits of what fans can expect from a TV comic book show. 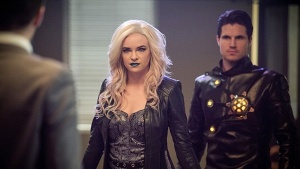 After watching a Supergirl episode that struggled under the weight of trying to do too much, it was even more impressive seeing how deftly the Flash writers explored so many various concepts without losing sight of the bigger picture. It helped that they didn’t try to wrap the Earth-2 storyline in one episode allowing for better pacing and character development.

On Earth-1, Joe, Caitlin and Jay had another problem to handle as a new metahuman — Geo-Mancer — surfaced looking for The Flash. Jay finally revealed to Caitlin the reason for his reluctance to use the Velocity 6 formula — his quest for greater speed led to the formula, which was slowly killing him. Caitlin whipped up a batch of Velocity 7, which allowed us to see Jay back as The Flash … if only for a moment. The vibrating helmet trick was pretty cool. Unfortunately, the formula conked out too quickly, but it gave Joe enough time to make the save. But with Jay getting back into the swing of things, we’re building ever closer to the Flash team-up to take down Zoom. 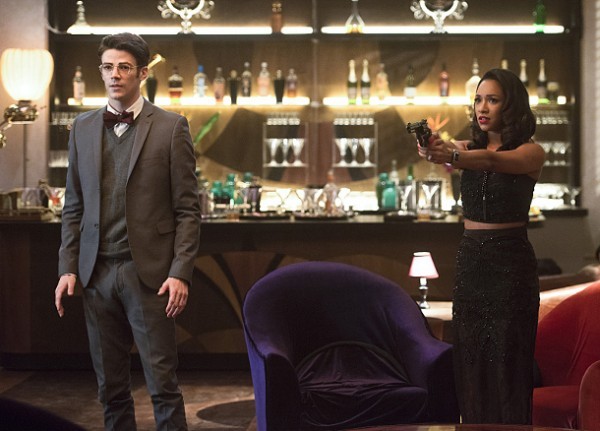 Earth-2 had an appreciatively golden hue reflecting of the comics’ Golden Age Earth. The costume and design of Earth-2 overall was an interesting hybrid of 1940s style mixed with advanced technology.

Even more entertaining was how it quickly became more of a Bizarro Earth for Barry and Cisco where pretty much everything they know is reversed. Police Chief Singh is a gangster, Floyd Lawton is Iris’ partner with miserable aim, Joe is a jazz singer (because there’s nothing Jesse L. Martin can’t do) who can’t stand Barry and in the big shocker, Iris and Barry are married.  It was neat seeing Barry had a lot of his future(?) Justice League allies Bruce, Hal and Diana on speed dial.

Equally shocking for Barry was learning his mother was alive and having a conversation with her about their potential trip to Atlantis. Grant Gustin really shined in this episode playing the E2 Barry as a geekier version of his Earth-1 identity. The comic book shot out with Barry rocking a bow tie was a nice touch. Gustin had a nice emotional scene as he spoke with his mother and without having to explicitly state it, you got the sense Barry was considering this Earth-2 life was really a much more wonderful life.

But as continues to be the case, time travel/Earth hopping don’t result in happy endings for Barry. Zoom’s minions Killer Frost and Deathstorm were on the hunt for the Earth-1 breachers and killed Joe. Feeling responsible, Barry had Cisco deviate from their main mission so they could bring them to justice. That went badly as Iris, Lawton and Cisco encountered Deathstorm and Killer Frost’s boss, Reverb aka the Cisco of Earth-2. 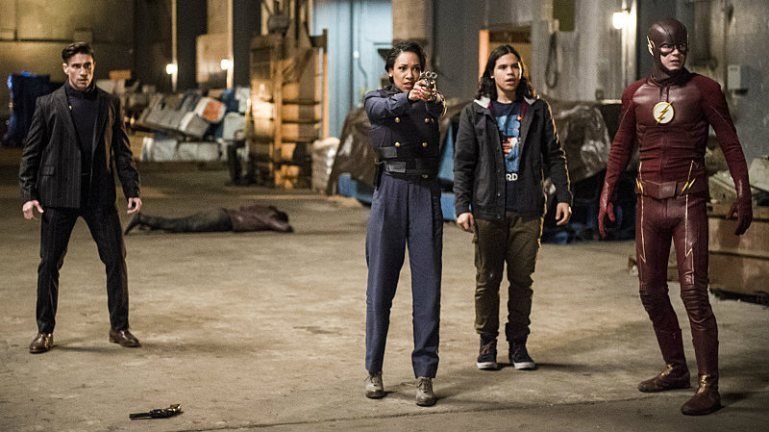 I loved Cisco’s reference of Reverb trying to Cloud City him as Reverb suggested an alliance so they could rule the universe. Reverb’s powers are much further along as he used his sonic wave as an offensive weapon. Nice to see what Cisco’s full potential could lead to beyond just being Flash’s tech support.

Zoom got a much-needed boast to his bada$$ factor as he appeared … in a flash to kill Deathstorm and Reverb for harming Flash. Zoom nabbed Flash and put him in a containment cell next to a man in an iron mask — the Earth 2 Doctor Doom? — and Jesse. Things look bad for Team Flash as this episode wrapped and next week looks just as promising.