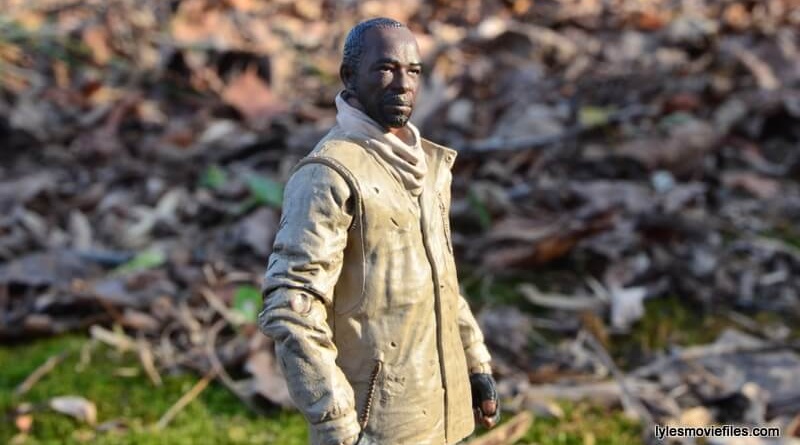 Ever since he welcomed Rick Grimes to the new walker world, Morgan has been an audience favorite on The Walking Dead. With his transformation from broken gun waving psycho to bo staff-wielding pacifist Morgan has entered the upper echelon of kick-tail TWD characters. Naturally, this made

Packaging: Wave 8 sticks to the simplistic packaging the line has been known for since its inception. I’m not the biggest fan of the back, which is just a collage of the other figures and no kind of specifics on the accessories or a bio.

Likeness: One of the most impressive aspects of the line is the ability to nail the actors’ likenesses so strongly in this smaller 5″ scale. Morgan is no exception as there’s no mistaking star Lennie James. The figure’s expression captures that thoughtful all live is precious mindset. Morgan is wearing his bulky coat and baggy pants, which makes the figure look somewhat pin-headed when the hood is off.

While the right gloved hand is sculpted, the left one is simply painted on, which is an odd detail to skimp on. The shin guards are sharp and actually look strong enough to hold off ankle biting walkers.  Although bulky, the coat looks like it would keep Morgan warm through the winter and has nice, subtle details like the zippers and fabric folds. The attire choice is very specific for winter/hiker Morgan and not the more ideal Alexandria resident version, which would be a better fit with the more short sleeved and tank top figures we’ve already gotten. 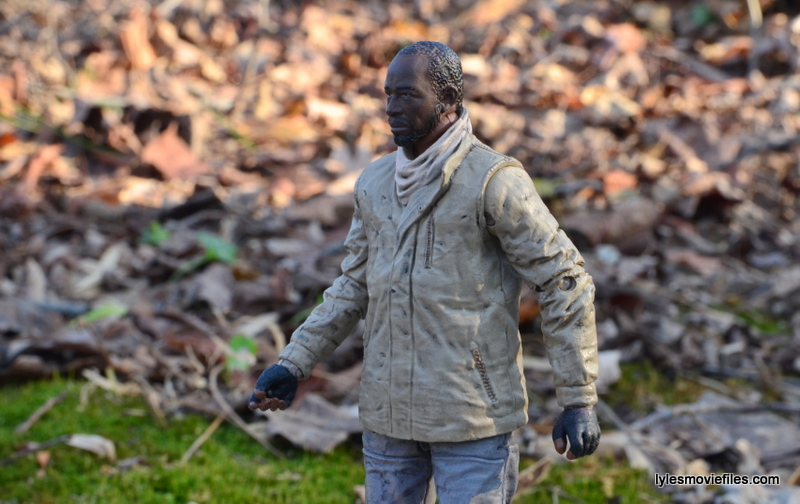 The only screw-up is the skin tone of Morgan’s unmasked head doesn’t quite match up with the exposed neck area. The scarf and head placement hides most of it though, but it’s an unusual goof from McFarlane Toys. 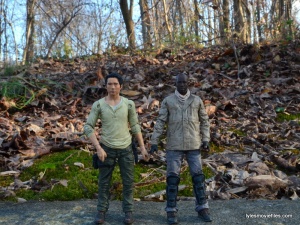 Scale: Morgan clocks in at standard height for the line, the same height as Rick Grimes, Glenn and Abraham. James is shorter than Andrew Lincoln and the figures reflect that height difference, which I appreciated.

Articulation: Morgan doesn’t reflect some new change with the articulation scheme, which remains frustrating. The bulky jacket makes the lack of waist articulation more noticeable. As always, the hip range of movement is too restricted to allow you to get especially creative with posing beyond a mini-split. Back and forth movement with the legs is even more pronounced thanks to the jacket. And with the one character who actually uses martial arts in his fighting style, his articulation woes are even more disappointing than normal. 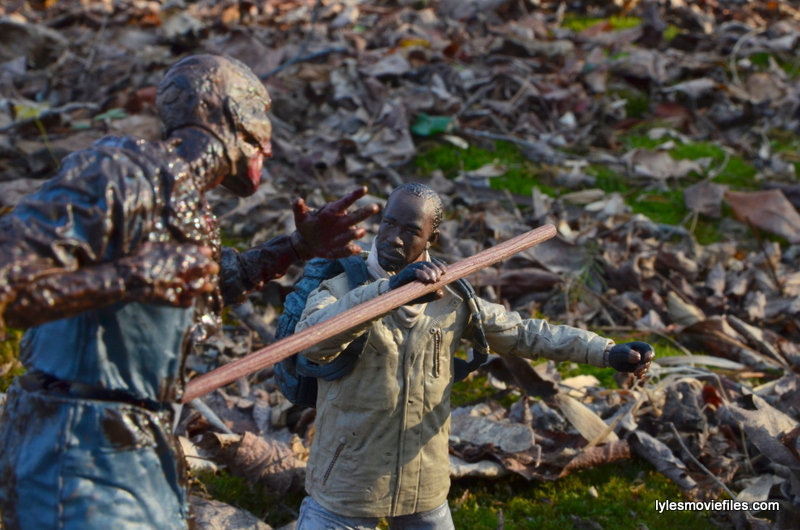 Accessories: Morgan shines in this category like most of the figures in this line. He comes with his bo staff, a machine gun, a removable hood, backpack and a second head sculpt with a ski mask. The heads swap without any problem and the hood piece plugs into a hole in the back of Morgan’s collar piece.

The staff fits securely in his hand, something that is sadly not always as common as I’d hope with hand grip accessories. The gun also is a nice snug fit. Surprisingly, I had the biggest issues with the backpack. The straps on mine didn’t have enough give to allow the backpack to actually fit on Morgan’s back correctly. Of all the accessories it’s the one I need the least and Morgan can hold it in his hand via the strap.

Worth it? At $15, Morgan offers a better value than some of the other figures thanks to the display options. I still wish this line was more in the $11 to $12 range, but that price battle has long since been lost. 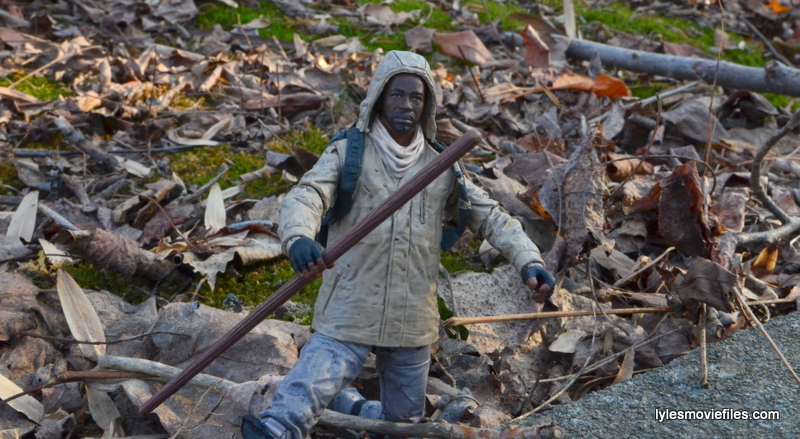 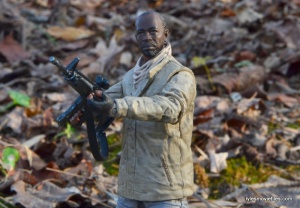 The attire choice hinders the already limited articulation, which isn’t what I’d like for one of the more dynamic fighters in the show. Morgan is a pretty solid figure graded on this line’s curve.

Where to get it? I found Wave 8 at Toys R Us, which is where Series 8 has just started popping up. Otherwise, your best bet is finding him online.

Amazon.com has him in stock for just over $14:  McFarlane Toys The Walking Dead TV Series 8 Morgan Jones Action Figure