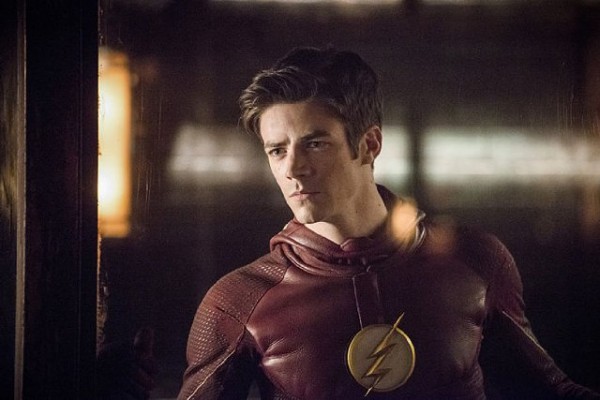 This season of The Flash has gotten so good that the seven day wait between new episodes can’t arrive fast enough. Sure between Arrow, Legends of Tomorrow and The Walking Dead, there’s enough distractions, but none have me nearly as excited for my next 60-minute TV hit as this latest string of Flash episodes.

Tonight hardly let off the momentum delivering yet another standout episode in a season where that’s becoming the rule at this point. While last week was a bit more carefree fun as Barry and Cisco discovered a vastly different Earth-2, tonight was darker than a typical episode and it worked. The Flash writers continue to excel at knowing when to have fun with the characters and scenarios and when to raise the stakes and keep things serious. 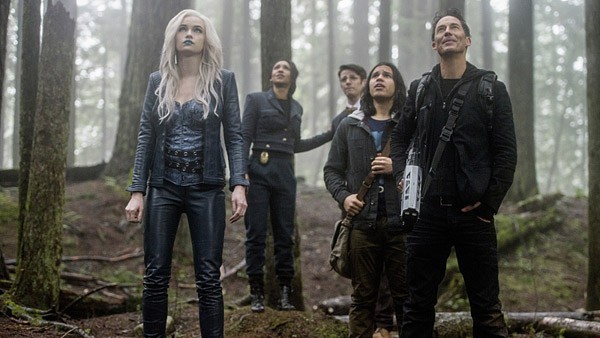 With Barry in Zoom’s custody, Cisco and Wells desperately tried to find him even as Zoom was terrorizing Central City looking for Wells. Over the last couple of weeks Zoom has gone from menacing nuisance to straight up serious threat worthy of Tony Todd’s sinister vocal performance.

Instead of being an all bark/no bite character, Zoom has emerged as more of a horror movie villain with the threat of him speeding in at any moment to take somebody out. The opening sequence of Zoom looking over the cityscape with a message for Wells burned alongside a building was a strong visual.

Grasping for any possible way to track down Zoom’s lair, Wells and Cisco bring Earth-2 Barry and Iris to the fold. While neither can find Zoom, Barry uses a computer program — that hopefully Cisco was getting some notes on — to find Killer Frost. Grant Gustin, Candice Patton and Danielle Panabaker were especially solid this week in making their characters’ Earth-2 counterparts distinguishable from their Earth 1 versions yet retaining the core elements of their personalities. 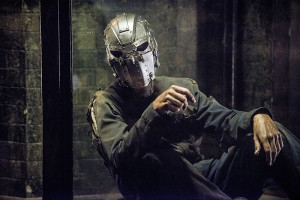 Stuck in Zoom’s cell, Barry finally met Wells’ daughter Jesse and the prison’s other resident — a man in an iron mask. It’s pretty late in the season to have a big mystery, but I’m so intrigued with the identity and possibilities — could this be Earth-2 Eddie or even Earth-1 Eddie? — that I’m fully invested already. As Barry and Jesse started cracking his code and making out ‘Jay,’ I was convinced that the Jay that’s been palling around with Team Flash this season is a mole.

Back on Earth-1, Caitlin whipped up a new batch of Velocity 9 — strong enough to allow Jay time to save a collapsing building caused by Geomancer. After making such a big fuss over it earlier this year, it’s somewhat annoying to watch yet another villain waltz on in to the STAR Labs core. If nothing else, why won’t they invest in a deadbolt? And why would Geomancer think to find Flash there? Minor quibbles. It was a nice touch to see Caitlin and Iris taking Geomancer down without any assist from the guys though. 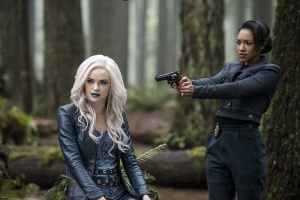 I’m not entirely sold on the latest wrinkle in “our” Iris’ storyline as she has a new editor Scott Evans (Tone Bell, who lucked out after NBC’s blink and you missed sitcom Truth Be Told) who’s not a fan of fluff superhero articles. The concern is Scott is going to be a one-dimensional grumpy editor trying to sell newspapers at Flash’s expense. The writing team has done a better job of avoiding cliches though so it may just be a case where Scott becomes Iris’ new love interest.

On Earth-2, the ragtag crew made it to Zoom’s hideaway thanks to Cisco convincing Killer Frost to help them. I loved Barry’s line when KF initially attacked them with an incredulous “Her name starts with Killer. How is this a shock to you?” Leave it to The Flash manage to make a character inspire themselves an incredibly emotional moment. This show lives for making scenes to choke me up.

E2 Barry’s pep talk to Barry was enough to convince Flash he could escape Zoom’s cell, but he wasn’t fast enough to rescue the mystery man as Zoom returned. 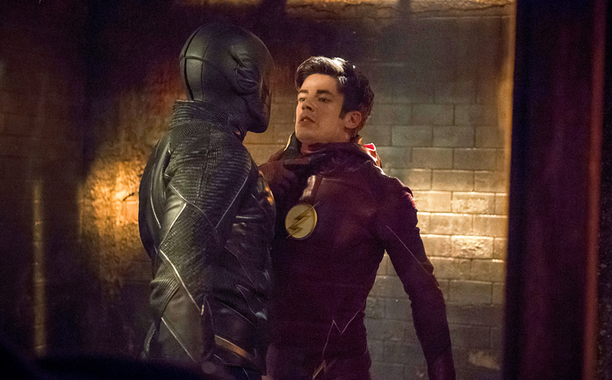 Killer Frost decided to get some payback for Ronnie’s death, but the camera cut before we learned if her sacrifice cost her life.

Cisco and Jesse return through the breach, but Zoom nabs Wells. Flash is able to rescue him and Jay throws the breach-closing football through the portal.

But before Team Flash can celebrate, Zoom does the speedster impaling finishing move and drags Jay back. While that’s assuredly not the end of Jay, I’m very anxious to see the fallout and Barry’s new mission to free Zoom’s prisoner. Is it next Tuesday yet?

Another tremendously outing from Flash as Season 2 shows no signs of slowing down with the mystery of Zoom and his prisoner.