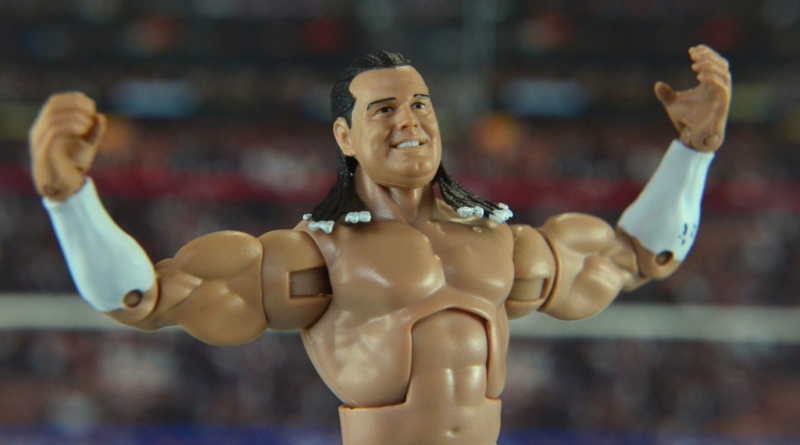 One of the more endearing wrestlers from the days of Hulkamania through the New Generation to the Monday Night Wars, Davey Boy Smith aka The British Bulldog.

Powerful enough to battle bruisers like Vader, Psycho Sid and The Warlord, yet skilled enough to hang with scientific wrestlers like Bret Hart, Shawn Michaels and Steve Austin, Bulldog was one of the best hybrid wrestlers of his era.

For all the fans (like me) thrilled to have a 97 era Hart Foundation version Bulldog, there was a sizable outcry for folks who wanted a Bo Derek braided version. And it’s finally arrived via Elite Series 39. Now we can fully devote our whining for a British Bulldogs tag team version with The Dynamite Kid.

It’s been a long time since Mattel first released Bulldog so let’s see if this highly-demanded 92 is worth it or if we’ll have a bone to pick with Mattel. Sorry.

Packaging: The Elite packaging is tops on the market for me right now. It’s colorful, eye-catching and showcases the figure well with some nice character specific details. These are just a tad more information on the bio card from being perfect.

Likeness: This is a pretty good likeness of Davey Boy. The expression has a lot of character and is one of those rare times going with a non-neutral expression works.

In his braided hair days, Bulldog was smiling more often than not. The hair braids are nicely sculpted as well. Though you might need to dip them in hot water to lay correctly instead of being suspended in air thanks to the cape placement in the package. 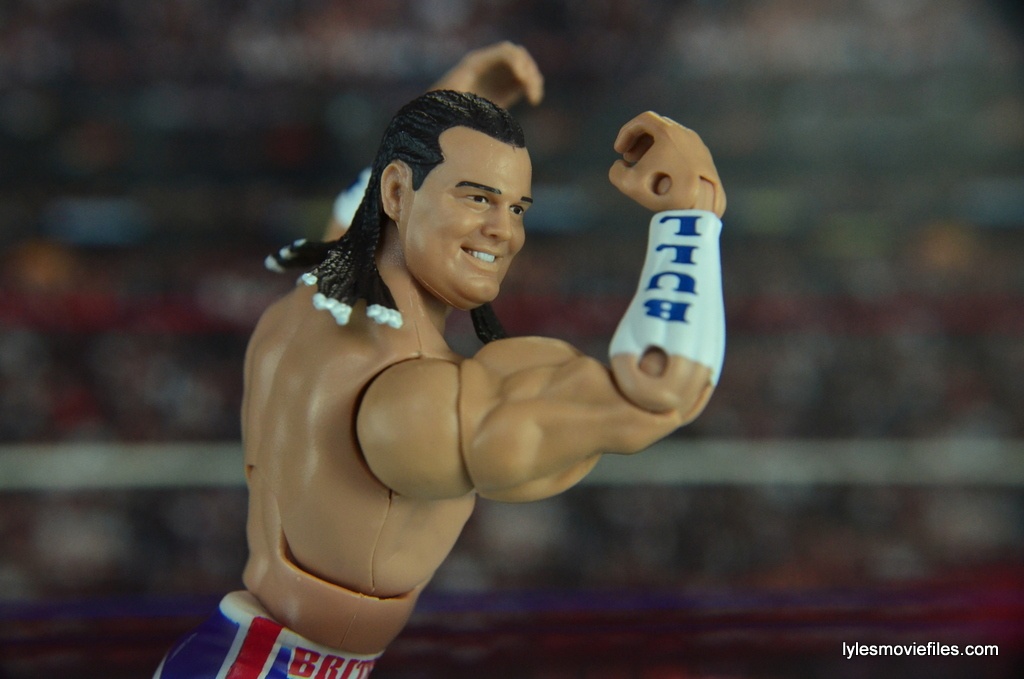 Mattel chose the appropriate body for Bulldog with the wider, defined torso. He wasn’t ultra ripped like a Lex Luger, but he was in good shape. 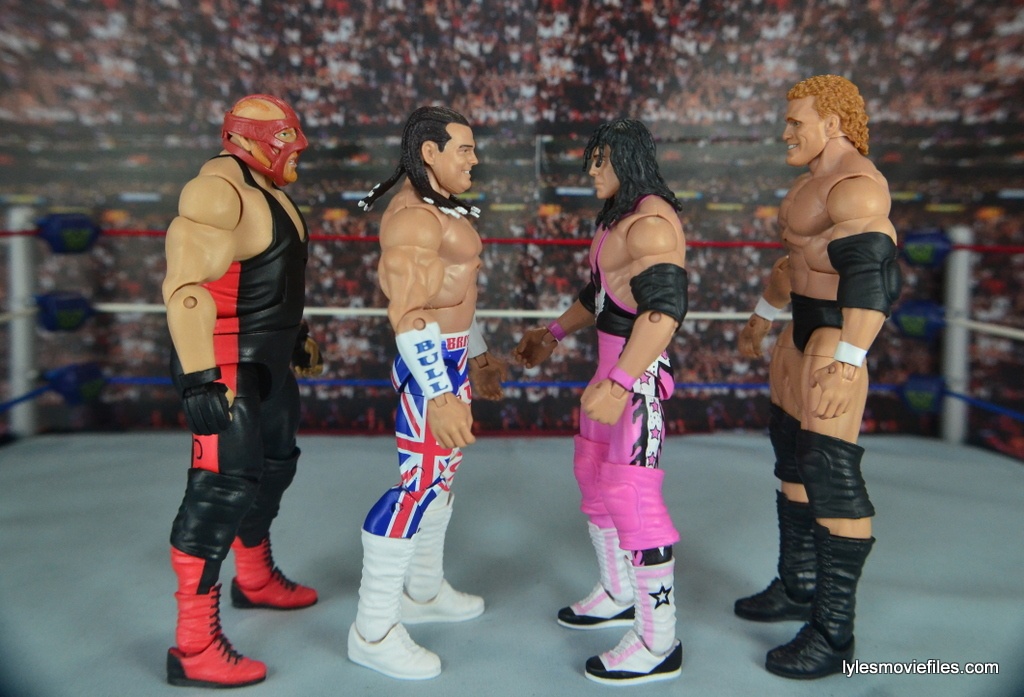 Scale: Bulldog stood at 6’3″, taller by two inches over his brother-in-law Bret Hart and shorter than giants like Sycho Sid at 6’7″ This is a good example of Mattel getting the scale perfectly on figures and sticking to it within the line.

Paint: Bulldog’s attire lends itself to a challenging paint job. Mattel seemed to have a little problem lining up the white stripes on right leg Union Jack as all around they’re just a bit off. 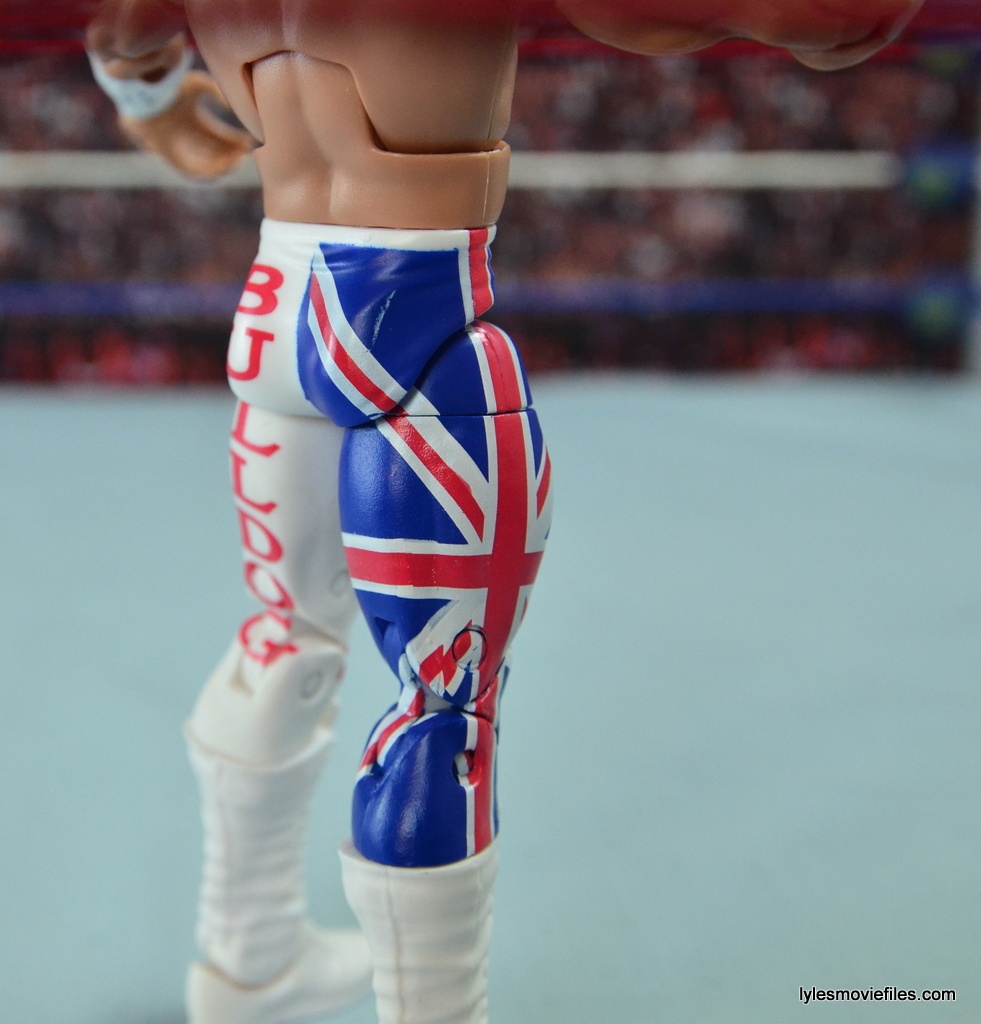 The British Bulldog tampo on the waistline and left leg came out very nicely. My Bulldog had some paint smeared from the cape, which also had its share of problems. More on that later. 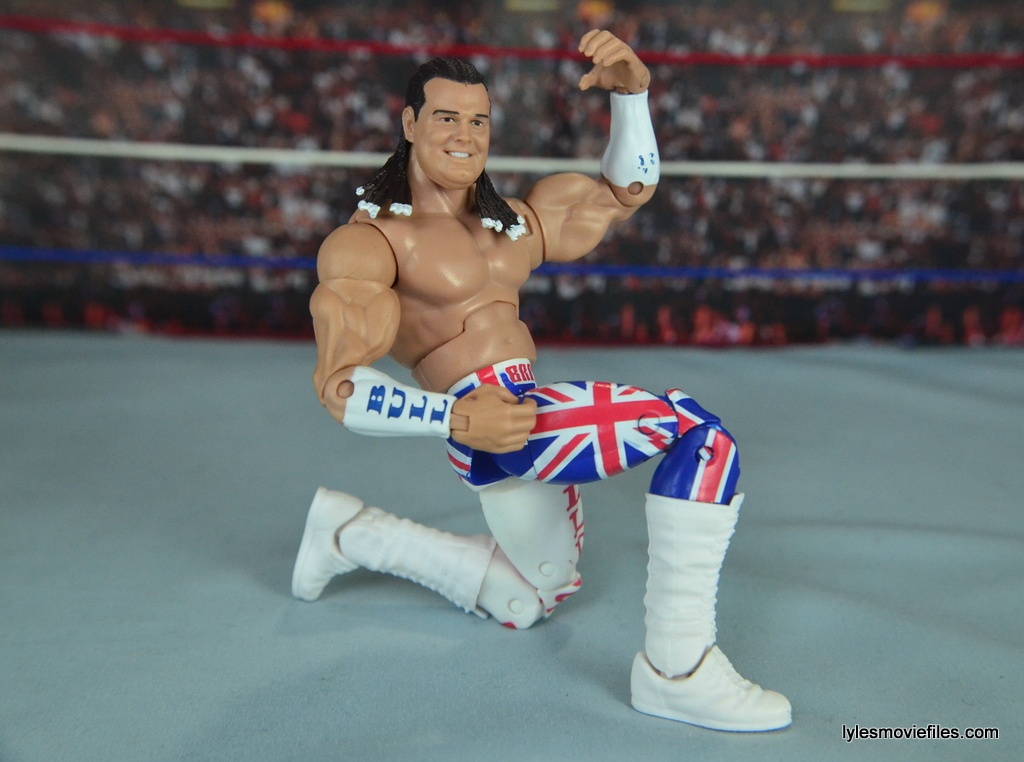 Articulation: Mattel’s Elite articulation is typically great for powerhouse wrestlers like Bulldog. There’s not a whole lot of weaknesses here. He can hit his extended suplex without support even to a figure as hefty as Vader and the Running Powerslam isn’t an issue either. 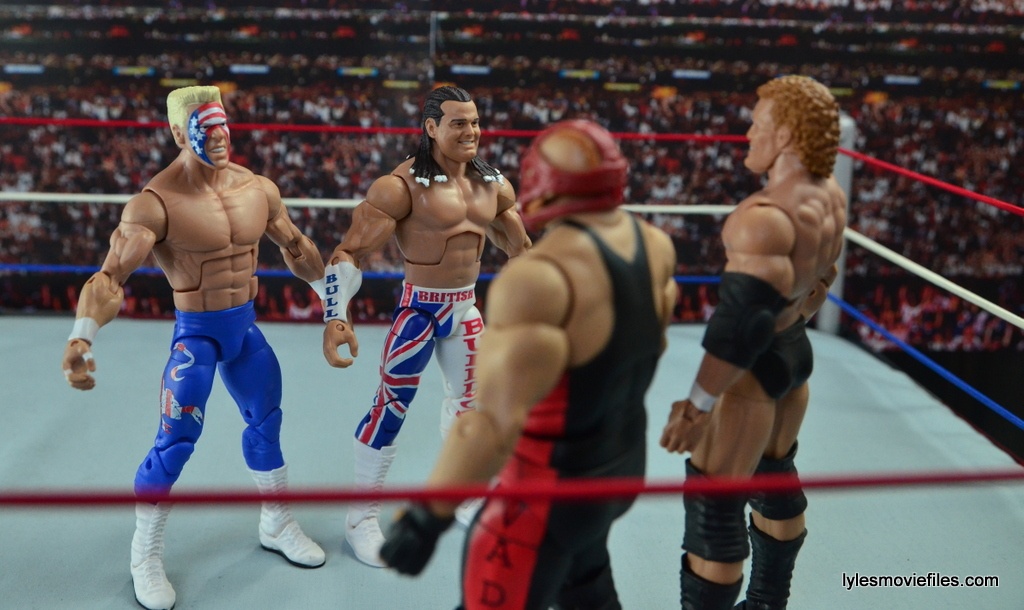 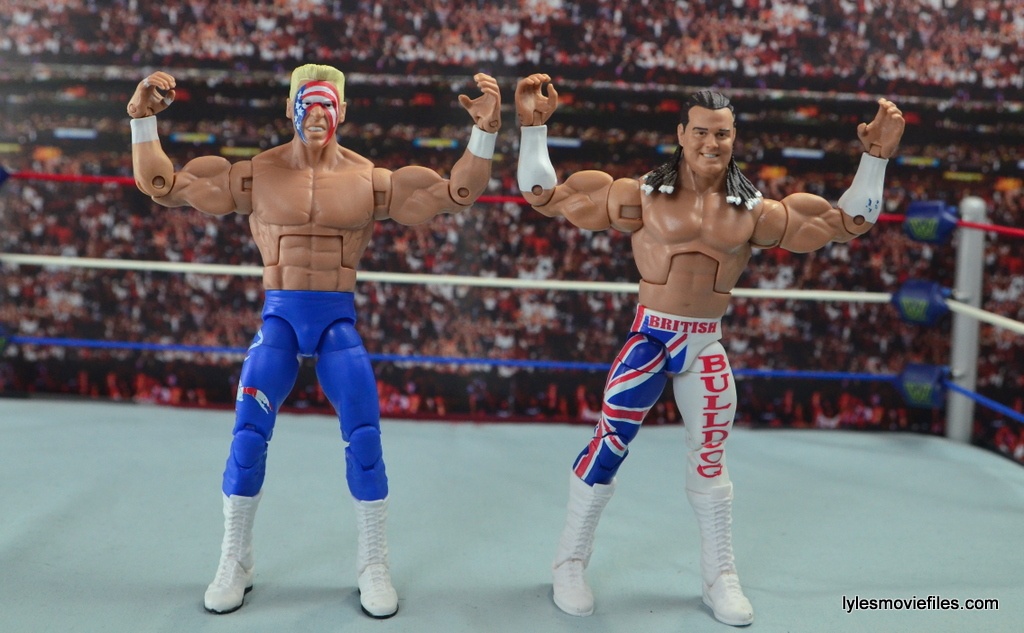 I’d appreciate the open hands a lot more if Bulldog came with a flag or something he needed to hold. Otherwise fists would have been preferable. 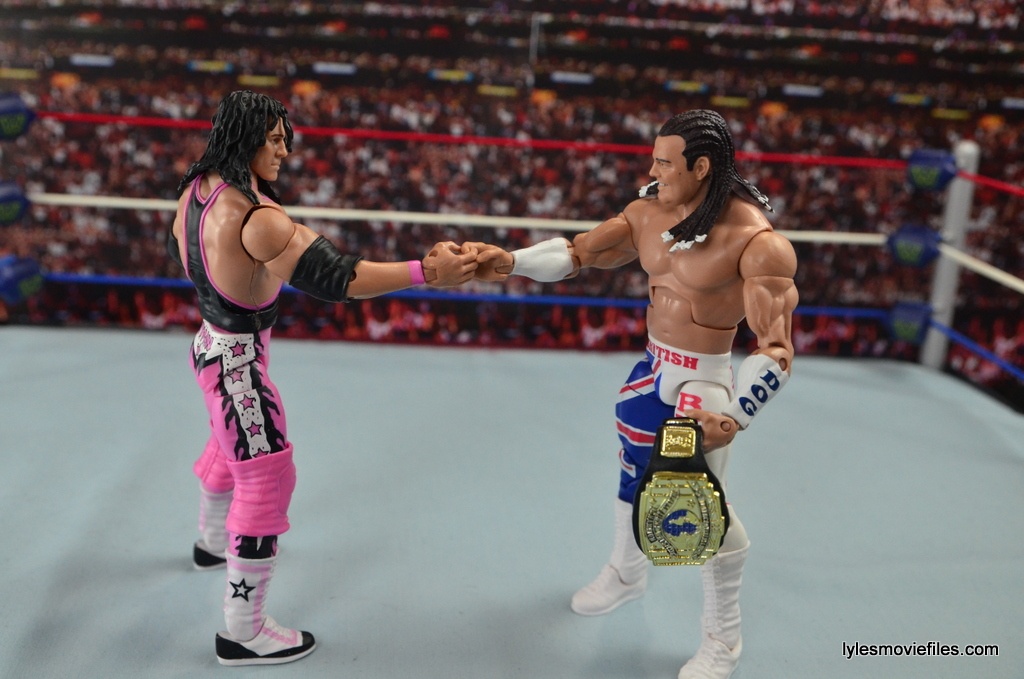 Accessories: Sorry, no Maltilda this time, but Bulldog does come with his signature cape. Made of hard plastic in lieu of soft goods, the cape doesn’t offer that draped down look it should. It appears the paint didn’t take well to the plastic resulting in a tacky feel to the cape. The plastic cape fails in pretty much every regard. This is one of those instances where Mattel just needed to bite the bullet and make it cloth.

The line gets blurred between what makes a regular Elite figure and a Defining Moment figure. In Bulldog’s case, he would have benefited from the extra attention and budget. Matilda would have been nice in addition to a Union Jack flag. He certainly would have made for a better selection than the recent Ultimate Maniacs Ultimate Warrior. 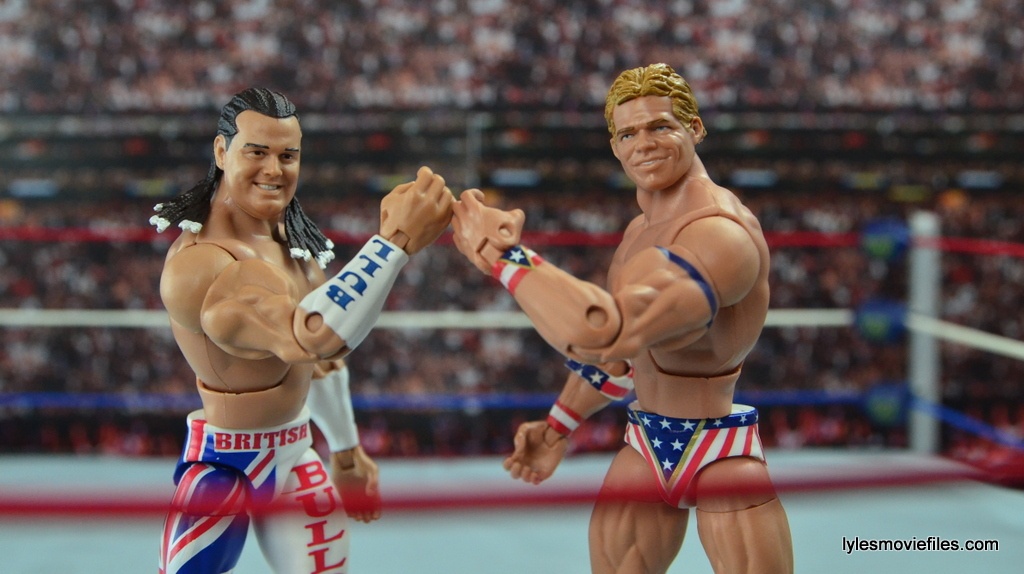 Worth it? Bulldog is right at $20. He’s not the best value considering his one accessory turned out so lousy. He’s a figure definitely worth grabbing although I’d feel a lot better paying around $15 in his case. 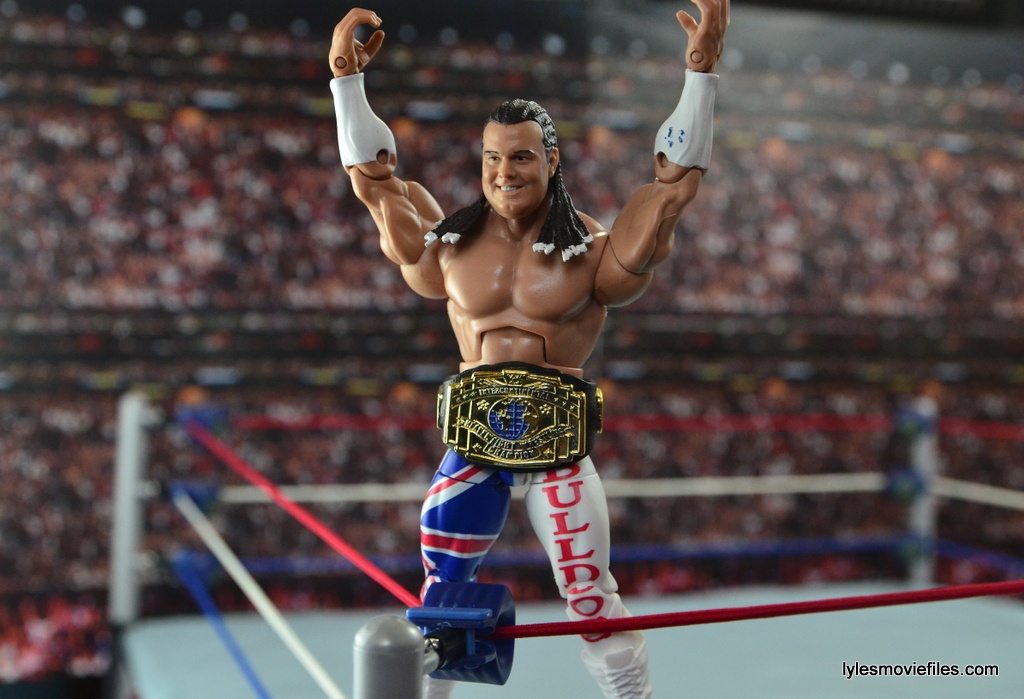 Bulldog is an essential member of the WWE New Generation era and he works for a 1993 WCW mainstay as well. 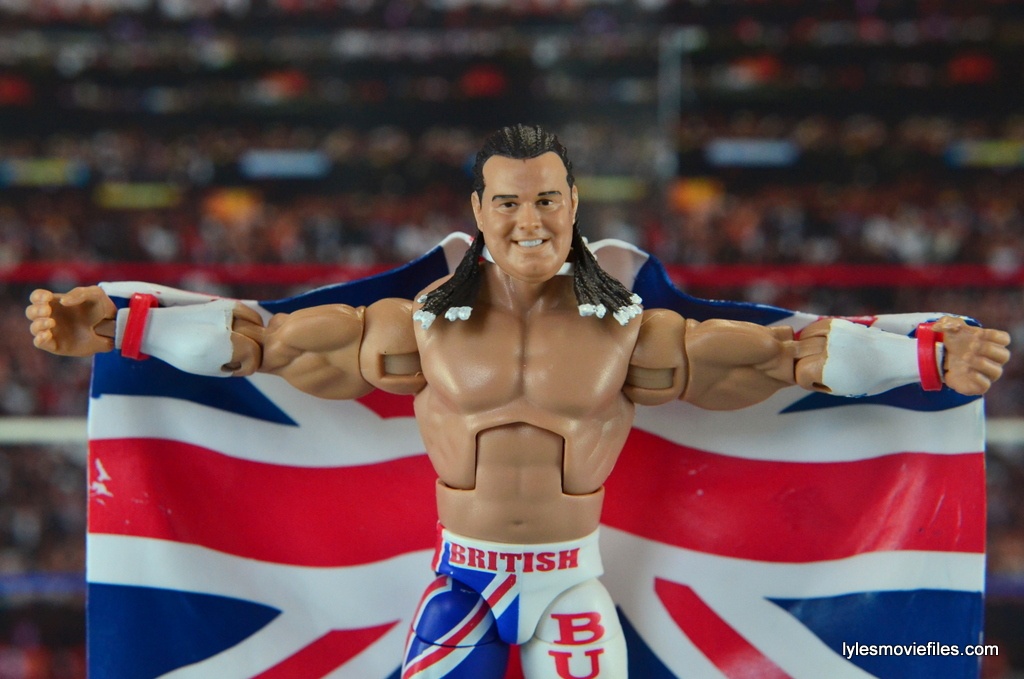 Where to get it? Elite 39 is still available at retailers like Toys R Us, Walmart and Gamestop, but if you don’t feel like searching you can always check out Amazon.com using the following links: