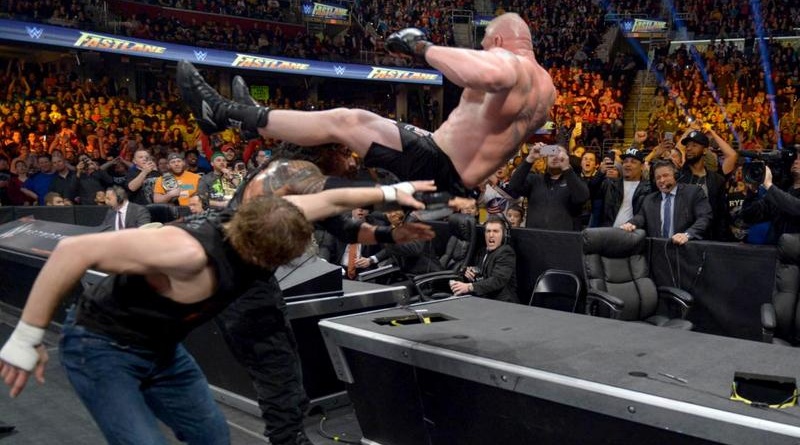 Live from Cleveland. This is our one match show where the outcome is pretty much a given. Let’s see if the WWE can put together anything to surprise us.

Sasha Banks and Becky Lynch
vs Naomi and Tamina

It’s surprising it never came to fruition during the Bellas era, but considering the amount of Divas in the division, WWE really should consider a Divas tag team title. Naomi and Tamina would be ideal champs as neither is anywhere close to getting a solo title, but would thrive against makeshift Divas tag teams like Nattie and Paige, Alicia Fox and Summer Rae and whoever else gets called up from NXT.

Naomi seems so energized being able to fight Divas at/slightly above her level and she was on fire tonight. Sasha has an almost Brock Lesnar like appreciation from the fans and they don’t care who she’s fighting. Of the NXT Divas that have been called up, she is definitely the biggest star from the fans’ perspective and it’s not even close. As usual, Sasha was crisp with her moves and staying true to her character continually talking trash and cocky.

I was really glad this match got a lot of time as it showcased all four strongly. Sasha caught Tamina in the Banks Statement for the win in what was easily the most enjoyable match in the Divas Revolution Era. This was a very strong match and a great way to kick off the show. I’m sure WWE has bigger plans for Sasha at Wrestlemania, but I’d be just fine with these four battling again at the big stage.

I’m still unclear how Seth Rollins and Daniel Bryan had to vacate their world titles before 30-days, but Triple H has gone into hiding since winning the belt without a peep. At least have him pretend to care about the belt by giving some jobber a title shot to keep the pretense of a 30-day defense rule.

This is a match we’ve just seen too many times on Raw and Smackdown recently for it to be captivating. In old days, the two guys fighting at a ppv would rarely have a series of matches to build to that big match. And because of how the TV matches are booked now with false finishes and repeated use of finishers, there’s not another gear for the guys to reach in these Network special matches. Also, Ziggler’s Princess Leia hairstyle is distracting. Both guys worked solidly and Owens continues to show the kind of character and personality that should be the basis for most WWE heels.  Owens gets the win with a pop-up powerbomb. Ziggler has become the modern equivalent of Lex Luger. He’ll earn the big title matches, but there’s little chance he’ll emerge with the victory. Ziggler’s use has to be one of the Top 5 things wrong with the WWE these days.

Byron Saxton must have touched Vince McMahon’s arm as he has to spend the match standing when Bray takes his chair. Shame the arena doesn’t have one more chair to spare. This was about as good as this match could have been with five big hosses and Luke Harper trying to keep it together. I hate that Ryback’s one distinguishing feature — his airbrushed tights have been replaced by a boring black tights outfit. Way to make him stand out less. Ryback dumps Harper in an ugly looking Shell Shock for the win in a move that made little sense. The Wyatts are a tight unit with the numbers advantage. Why have a makeshift trio beat them just as the Wyatts were getting some much needed momentum?

Jojo interviews Roman Reigns. I love how everyone’s acting like this is the first time Ambrose and Reigns’ friendship is being tested over a shot at the WWE title as if they didn’t fight for the title at Survivor Series just a few months back. 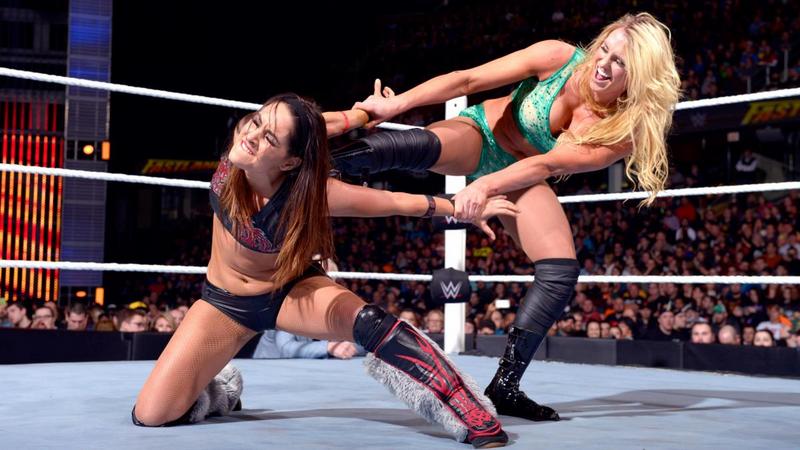 This is such a weird match. It’s basically Ric Flair’s surrogate vs. the legacy of Daniel Bryan. As the match settles down, the fans quickly lose interest. Brie has been treated like such a jobber since Nikki won the Divas Title and basically being her fall guy for the next contender and now we’re supposed to buy that she’s going to win the title? Michael Cole mentions Brie is wearing the same kickpads Daniel Bryan wore at Wrestlemania 30.

If she’s ever going to get over as a heel, Charlotte has to immediately stop doing the Woooo chant. The fans love chants and dragging her daddy out to ringside is never going to help her cause. Ric Flair made a career off of being able to get three star matches out of a broomstick. Charlotte is still getting there, but this match was good practice for her in terms of carrying an inferior opponent. Brie is game as always, but she’s always been so deliberate with her moves that her matches are always clunky.

Charlotte dinged up her nose a little and got a little blood on the side. Brie hits a missile dropkick and hurts her knee in the process. I appreciate the effort here, even if it made Brie look way more credible than she should against Charlotte. Brie rebounded and got the Yes Lock before slipping off into an ineffective single leg crab. Charlotte casually muscles out of it and slaps on the Figure Eight for the quick submission victory.

Cole has to try and explain what happened proving that yes, he is capable of being a solid commentator when McMahon isn’t busy screaming in his headset.

Jericho does a great pre-match interview with Jojo framing the importance of this match for Styles. 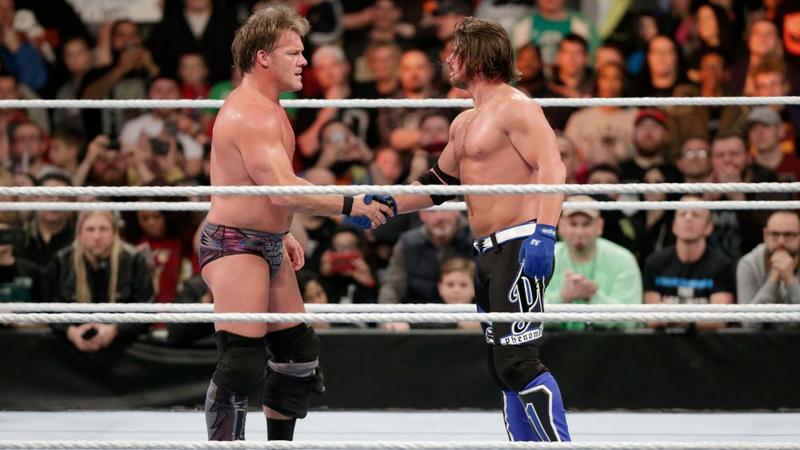 This is one of those dream matches we’re getting about 7 years too late. Styles would have been a perfect opponent for Jericho following his epic feud with Shawn Michaels, but now he’s just a bit too slow to keep up with Styles.  There were a few scary moments including one where Jericho seemed to botch a second rope Styles Clash and just dropped AJ on his neck and Styles had to wait on Jericho to get into position a couple of times.

That said, Jericho’s advanced comprehension of how to build and develop a match helped overcome most of those problems resulting in the night’s second really good match. Styles got the win following a Styles Clash and Calf Killer submission. The commentators sold this like a big win for AJ as he defeated a multiple time World, Intercontinental and Tag Team champion in Jericho. They don’t nearly do that enough so this further established AJ as a real player.

Fastlane panel. Renee looks like she’s all set for Game of Thrones to return. Would she be House Lannister? 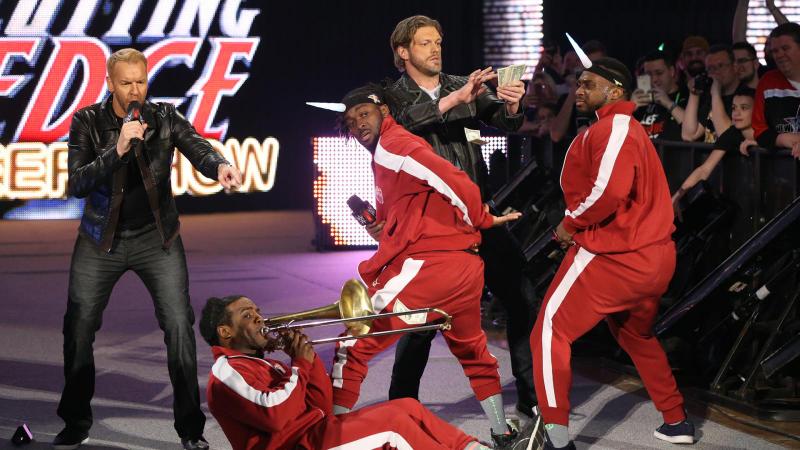 E&C get New Day talking trash about the League of Nations in what appears to be the beginning of a New Day face turn. This segment got weird from the moment the League arrived. New Day left the ring and then the League threatened E&C. Edge got a great line about doing more in the five years since Alberto Del Rio retired him than Del Rio has done, but the segment would have been better suited just having E&C interacting with New Day.

Social Outcasts come out for their weird brand of comedy. I like the concept of a group being concerned with going viral, but this combo seems so randomly tossed together.

Clearly everyone who skipped out during the Brie/Charlotte match missed a far better bathroom break opportunity. Goldust comes out to help even the odds/recapture the magic of his tag team with Booker T. Axel gets a roll-up for the win. This was too quick to even mean anything and seemed far more suited for the pre-game show.

I really like how this match started off essentially as a handicapped match, but with the two guys having the disadvantage to the one beast. Lesnar dominated and tossed both former Shield members around like rag dolls. It took an Ambrose low blow to finally put Lesnar down and then Ambrose and Reigns put Lesnar through a table before battling each other. Just as Lesnar started to recover, Ambrose and Reigns gave him another powerbomb table treatment. This was a smartly booked match as they were in essence playing keep away with Brock.

Reigns inhabits a unique space in the WWE. The fans will happily cheer him when he’s working alongside Ambrose, but the moment he starts doing his own thing, the boo birds come out in full force. Lesnar returns and starts dominating again, locking in the Kimura lock. Ambrose breaks that up with a chair and wails away on both guys sending Lesnar out the ring in time to eat a spear from Reigns and take the pinfall.

This felt like it was just getting going before the ending. It helps that anything can happen and it only takes three seconds, but this match was close to becoming special. With another 10-15 minutes, it could have been match of the night. Thanks to the stakes, it beats out Styles/Jericho, but Lynch/Banks vs. Tamina/Naomi was the one you really need to check out. 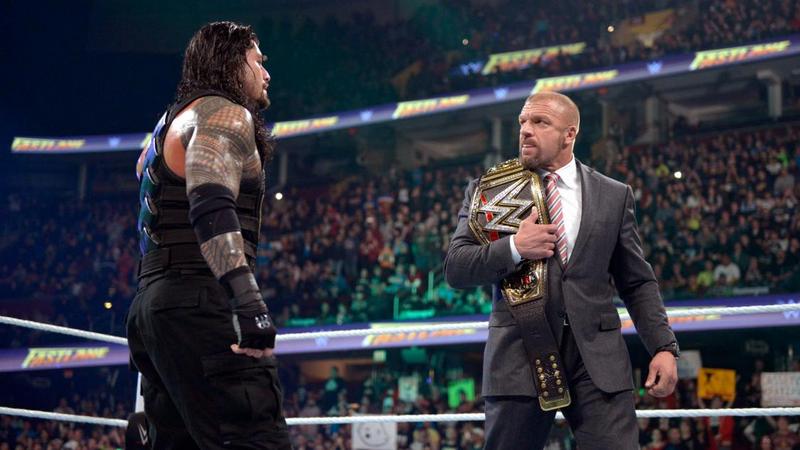 Of all the three possible outcomes for the fans, not surprisingly this was the one they hated the most. Triple H comes out to spoil Reigns’ celebration and to pose with the Wrestlemania sign in the backdrop. Clearly, this was the plan all along, but the writers are going to have to work hard to make Reigns’ triumph something the fans will embrace this time.

I liked this one better than the underwhelming Royal Rumble, but there’s still something lacking right now with the product and that’s definitely not the right direction as the Road to Wrestlemania really gets in gear. I hope the writers can come up with a solid plan to make what may be the biggest Wrestlemania yet truly feel special beyond the location.

Missed the show? You can still watch it on the WWE Network: