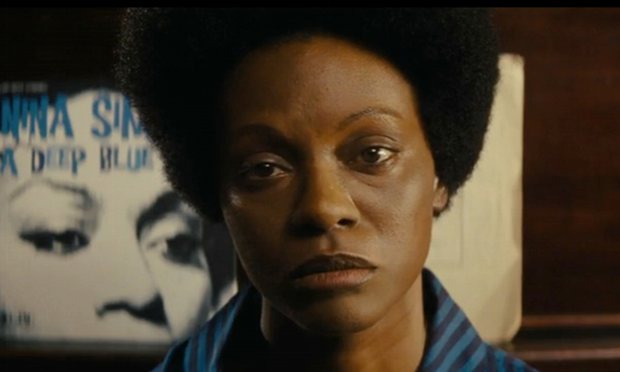 Zoe Saldana is probably long past the point she wished she just said no after being offered the role of Nina Simone as it has led to a pretty terrible week for her.

Saldana’s worst week ever kicked off after the first trailer dropped. It wasn’t pretty:

Rightfully so, the Internet lost its collective minds with folks wondering why in the world someone thought Saldana bared even a passing resemblance to Simone with some questioning why Saldana was in blackface.

.@zoesaldana Cool story but please take Nina's name out your mouth. For the rest of your life.

Hopefully people begin to understand this is painful. Gut-wrenching, heartbreaking, nauseating, soul-crushing. It shall pass, but for now…

Hoping to do some damage control in the same way that a water gun can effectively stop a forest fire, RLJ Entertainment president Robert Johnson issued a statement about the film.

“Zoe Saldana delivers an exceptional and mesmerizing tribute to Nina Simone.  She gave her heart and soul to the role and displayed her extraordinary talent.   The most important thing is that creativity or quality of performance should never be judged on the basis of color, or ethnicity, or physical likeness.  Quality entertainment should be measured by the sheer force of creativity and the commitment that an actor or actress brings to the performance.  We are proud to distribute the film headlined by Zoe Saldana and David Oyelowo on April 22, 2016.”
That Johnson has to come to Saldana’s aid shows how badly this entire situation has been botched. In most cases, talent can win out, but Hollywood casting directors keep being under this mistaken notion that the same small pool of actresses (Halle Berry, Zoe Saldana, Paula Patton, Alexandra Shipp) are the only ones available to play any role for a black person. It’s long since past time to introduce audiences to new black stars of every hue.
For Simone fans, the far better option would easily have to be the Oscar-nominated What Happened Miss Simone? documentary.