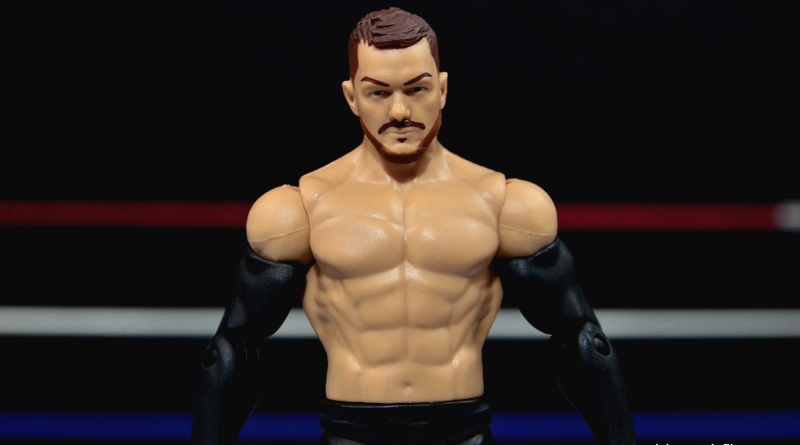 Right alongside AJ Styles, Finn Balor is my other favorite wrestler. AJ’s arrival in the WWE has me eagerly anticipating a match of the two Bullet Club stars. As the highly touted superstar and current NXT champion, it wasn’t surprising Mattel rushed to get a Balor figure out as soon as possible.

Thanks to his cool gimmick within the gimmick with his Demon face and body paint, Mattel was able to go with the more intricate paint-heavy version for Elite 41 and use his regular look for the Basic figure. It’s the best of both worlds for Mattel as impatient folks like myself won’t want to wait for a regular Balor in the Elite line and will quickly grab this figure to convert into an Elite version. But for those of you who have every intention of keeping him this way, let’s break down what you’ll get. 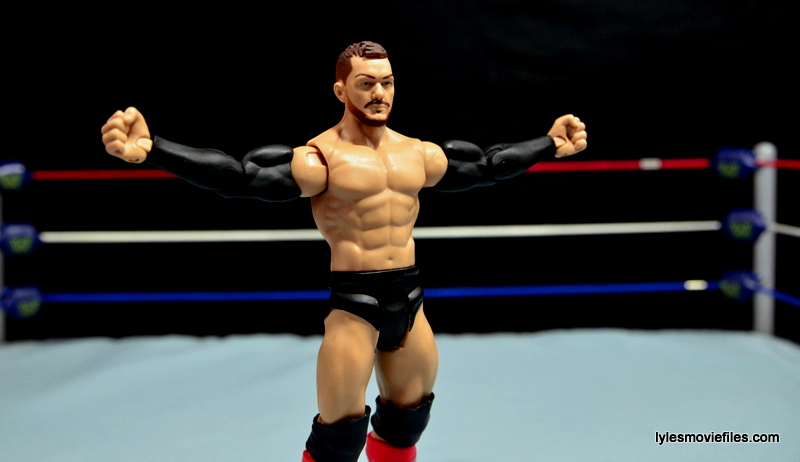 Packaging: The new Basic packaging is much better than its dull predecessor. While not as fancy as the Elite line, we still get the dynamic red base color and the brand appropriate accent in the left corner.

As an NXT star, Balor gets the yellow accent color. It’s a small change, but very helpful in looking through the pegs especially if you’re looking for a non Raw or Smackdown figure.The back features a nice showcase of the other figures in the line, which is something I wish other brands did better like the Star Wars Black line. 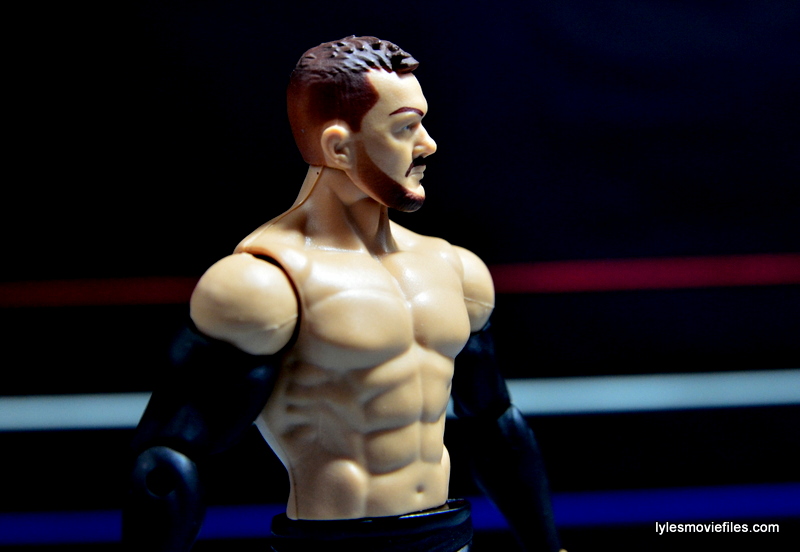 Likeness: The eyes are squinted just enough to nail the likeness and there’s even the bags under Balor’s eyes to help add to the strong sculpt. What’s throwing it off somewhat is 99% on the paint, which I’ll discuss in a moment.

The body chosen sufficiently captures Balor’s shredded torso better than the Elite — not the first time that’s happened. The black arm sleeves look to be the perfect length as well.

Scale: Standing 5’11” Balor is on the ‘smaller’ side for WWE stars so he’ll thankfully be looking up at The Undertakers, Kanes and Brock Lesnars of the WWE.

Most of the guys in NXT are around the same size though so it won’t matter until Finn gets called up. He’s just about right in scale with the 6’2″ CM Punk, 6’1″ Seth Rollins and 5’10” Daniel Bryan.

Finn may be a hair too tall as he shouldn’t be eye to eye with Punk and Rollins, but it’s such a minor difference I won’t complain. Not like I long for the days when Jakks had the license and Big John Studd and Bobby the Brain Heenan were the same height. 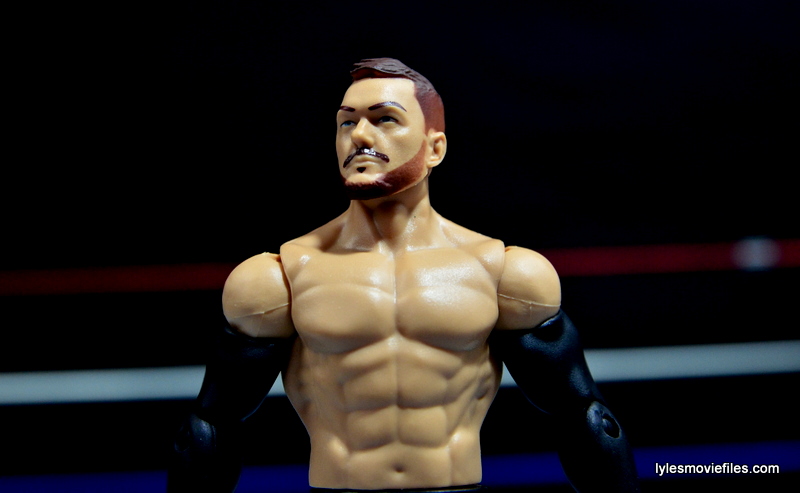 Paint: Some of what’s throwing off the likeness is simply the paintjob. Balor has a cool five o’clock shadow with a thicker beard and lighter mustache. The figure has the reverse and the heavier mustache screws the likeness somewhat. Capturing the more sophisticated aspect of this look is more than the Mattel painters can manage as evidenced by most Dean Ambrose figures so at least Balor doesn’t look like he’s been eating a bowl of Cheetos.

Another choice that muddies up the likeness is the brown hair color. Balor’s hair might be brown in real life, but it’s so dark brown it comes off in pretty much every light as black. While that kind of attention to detail is appreciated, Mattel would be better served sticking to what audiences see on TV. Balor’s patented red shiny kickpads are accurately captured here also.

Articulation: As a Basic figure, the articulation is severely limited, but at this point, that’s not a surprise. While you won’t be able to accurately do the coup de grâce properly with the Elite version, it’ll be a lot easier. I always wonder if cutting those extra couple of points are articulation are really worth it for collectors. 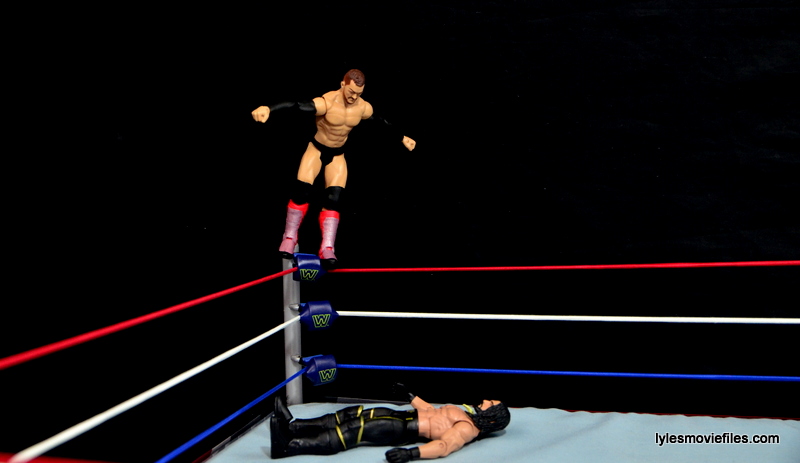 Accessories: As usual, there’s no accessories with a Basic figure. Fortunately Mattel included the black kneepads, which will come in handy when switching this to an Elite figure. Hopefully the eventual Elite version comes with a cloth leather jacket, NXT title and hands in Too Sweet/Bullet Club firing poses.

Worth it? A wrestling figure for $10 is a pretty solid deal these days. Mattel knew exactly how to handle its Balor roll-out. For the price it’s worth grabbing if you’ve got the parts lying around to convert into an Elite version if you’re impatient like me. 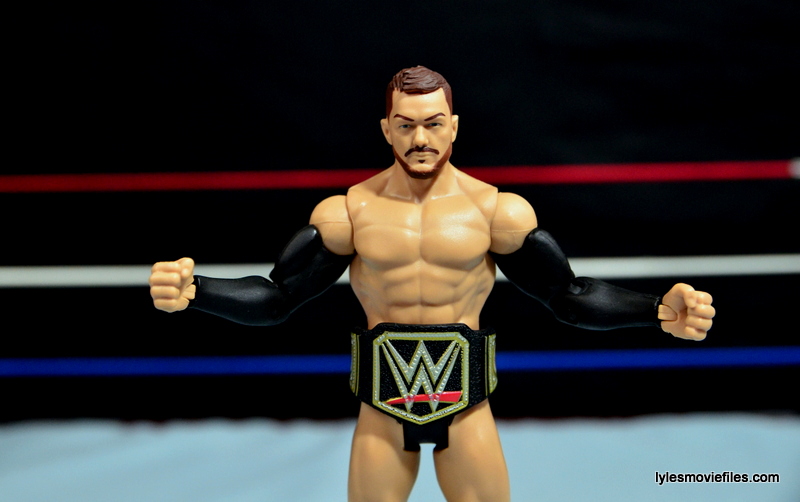 With an improved stubble paintjob this would be an easy 10. If you’re a Basic collector who even has a passing familiarity with NXT or even a Bullet Club fan, this will be one to add to the collection.

Where to get it? I found Balor at Toys R Us, but I’ve also spotted several at Wal-Mart and I suspect it won’t be long before he’s at Target as well. You can also use Amazon.com if you don’t feel like hunting him down: WWE Basic Figure, Finn Balor