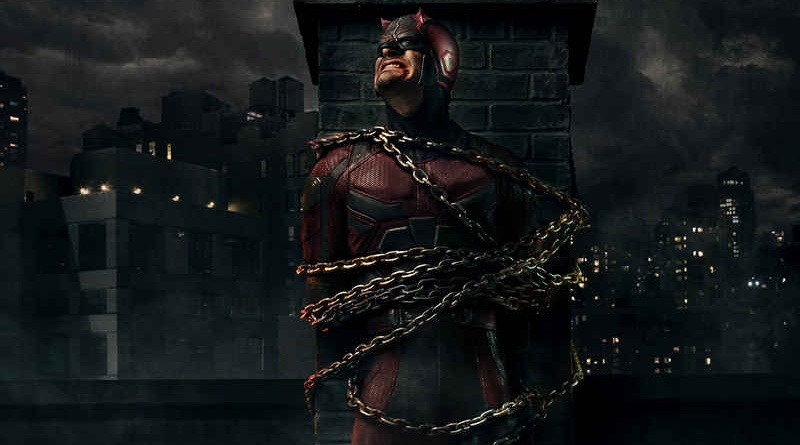 Wow. Any episode that features a heavy dose of Daredevil and Elektra battling The Hand in full on ninja mode is going to get a high rating. Toss in actual exciting courtroom drama and two surprising cameos and there’s no way this doesn’t earn a 10.

Daredevil and Elektra didn’t discover the secret of the giant hole, but they did uncover a slew of Hand ninjas. I’m loving the variety of backdrops in this season’s fight scenes. Dodging shurikens and swords was one thing, but avoiding plunging into the nearly bottomless pit was another issue.Matt’s anti-murder stance nearly proved costly. His reminder to Elektra distracted her long enough for her to get slashed with a poison laced sword. That took away Daredevil’s focus and he got pummeled by Hand soldiers ready to impale him when Stick arrived.

And he’s still the meanest mentor ever

Scott Glenn’s take on Stick is always fun. He’s the opposite of warm and fuzzy. Stick is cold, a little cruel and matter of fact to a fault. Oh and he’s a complete bada$$. The initial rescue scene was impressive — and the symbolism of Stick dismembering a Hand ninja’s hand was terrific. 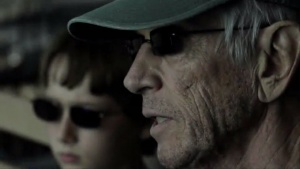 Even better was that wicked chase scene. Stick’s silent driver bobbing and weaving them through the streets while the Hand attacked from the streets and rooftops was sheer fanboy bliss. This was such a pure ripped from the comics sequence and it was thrilling.

After Stick whipped up an antidote, he revealed to Matt the history of the sinister Hand organization. The crime clan uncovered the secret to immortality and The Chaste —  Stick’s group, which also includes Elektra — is all that’s standing in their way. The Hand’s ultimate goal is to trigger a device of untold consequences that might be connected to the giant hole in the city. Matt blowing off Stick’s explanation as a fairy tale was a bit annoying since he’d clearly experienced the Hand’s viciousness on multiple occasions.

Stick got his own form of petty payback by letting Karen into the apartment and seeing Elektra in his bed. Stick is a no-nonsense character, but he’s a mean old bastard too. It was telling that Matt didn’t bother immediately going after Karen. Part of it was Elektra was still in terrible shape, the other was he knew Karen wouldn’t buy his excuse. The other explanation was far more likely — Elektra had fully recaptured his heart.

The People vs. Frank Castle

Once again Matt bailed on a court appearance as Frank’s trial continued and Foggy had to go it alone. You have to consider how badly Matt is letting down his friends here as Karen has to give Foggy a pep talk that essentially telling him to forget Matt and win the case on his own. For awhile, Foggy proves more than capable of actually winning the case with corroborating testimony from a doctor to explain Frank’s ‘condition’ and a character witness from Frank’s military supervising officer (Clancy Brown). Brown’s cameo was great especially since he played against type and wasn’t some slimy, underhanded villain. I loved how Jon Bernthal gave Frank a slight nervous tick that just so happened to be his trigger finger in a nice bit of foreshadowing the trial fallout.

The final courtroom scene was brilliant. Matt overheard one of Frank’s police escorts reminding him of something. Charlie Cox gave a great baffled expression here as Matt tried to figure out its meaning. It soon became obvious once Frank took the stand and obliterated the case stating he was well aware of his actions and would do it again before fully owning up to the name The Punisher. Matt couldn’t understand where it all went wrong, insisting someone got to Frank, but Foggy and Karen didn’t want to hear any of it as they both walked away from him on the courthouse steps.

Matt didn’t have long to reflect on the case as a Hand ninja attacked him at home. Elektra was still too weak to offer much assistance, but Matt finally got the upper hand. That allowed Elektra to slice the assassin’s throat proclaiming this is who she was all but begging Matt to accept her. Matt couldn’t respond though as the arrow he took to the chest was poisoned and seemingly rapidly killing him.

Frank’s court outburst directly went against his original plan to stick it to Reyes.That was explained in a powerful final scene as the officer led Frank down a prison corridor into the courtyard where a lone man was working out. The man turned and Wilson Fisk said Frank must have gotten his message.

Ninja fights, poison weapons, a tremendous blow to the case and two shocking returns led to another great episode in an already spectacular season.