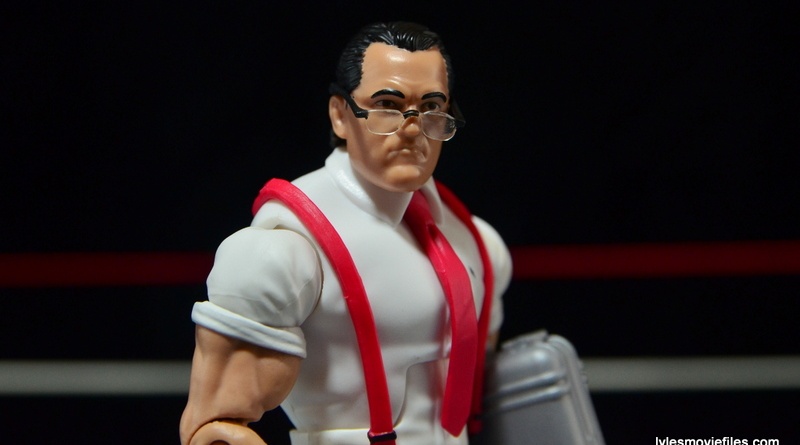 Wrestling allowed for more individuality in the 80s and 90s. And for a quasi-sport based around guys in tights fighting for supremacy, the WWF had a lot of guys that dabbled in wrestling as a break from their regular careers. We had race car drivers, trash men, plumbers and farmers so it made sense that a tax man would want in on the action.

IRS was arguably the most successful stint of Mike Rotundo’s career. He was a perennial singles title contender and multi-time tag team champion with partner Ted DiBiase. Let’s see if this figure has some bills to pay or delivers on the investment.

Packaging: The new package style works throughout Mattel’s various lines, but it really looks great with the Elite packaging. I love the distinct look of the various brands. As such, IRS gets the classic WWF logo button throughout the package.

I appreciate the numerous portraits on the sides as it makes shelf browsing considerably easier. Oddly, the back portrait of IRS looks much more based on one of his random wacky RAW appearances over the last decade not his 90s heyday. 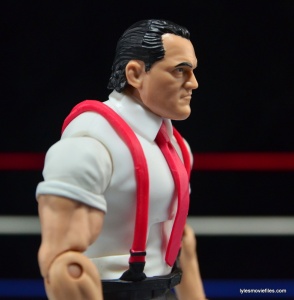 Likeness: IRS was actually slated for Elite 36, but some problems with the head sizing pushed him back a few waves. The only real issue now is the shirt mold is a little bulky around the shoulders and the head is so far down that IRS doesn’t have much of a neck.

The likeness is pretty strong. I found it odd Mattel went with the later era version of IRS with the slightly longer hair that blew out past his ears instead of the close cropped version he sported for most of his run and referenced on all the package portraits. Some of that stems from my frustration with not being able to easily convert IRS into a Varsity Club Mike Rotunda.

On the plus side, Mattel went the extra mile and gave IRS a rolled up sleeve mold instead of just painting it. That’s something that would have been understandable, but I like Mattel making it look right instead of just going the easy route.

Scale: IRS wasn’t short at 6’3″, placing him right about even with most of the stars of his era.The figure’s pants mold however make him way too tall, making him about 6’8″. 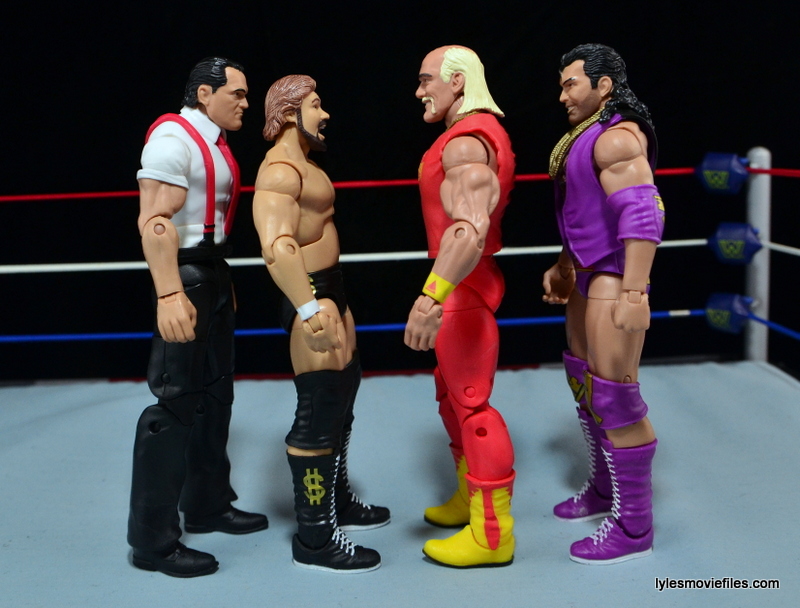 I’ve read people have been able to fix the height issues by swapping the lower half out with BAF legs, which will be something I’ll take a look at since his current scale is way off — something Mattel typically doesn’t have a problem getting right. 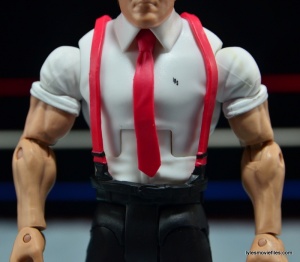 Paint: IRS might have the simplest paint job of any WWE figure this year. It’s all separate parts reducing the possibility of paint smears and the like. Look closely and you’ll see the tiny IRS emblem on his shirt. It’s not something most people think of with IRS, but he did have that on some of his shirts. It’s another minor detail Mattel added to get IRS right.

so it was important Mattel did everything properly this time out.

Articulation: If you’ve gotten one Elite figure, you pretty much know what to expect from the top half. The pants are done in the DC Classics hinge hip style though you won’t have a problem getting IRS to re-enact any moves you can come up with for him. 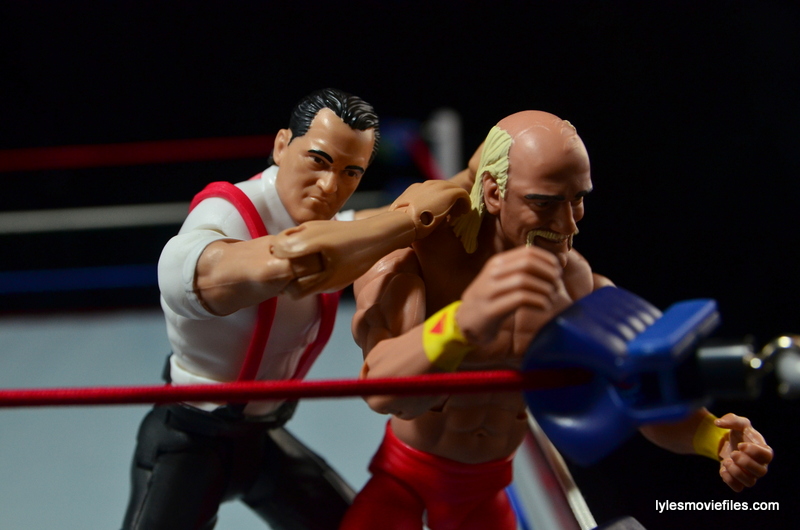 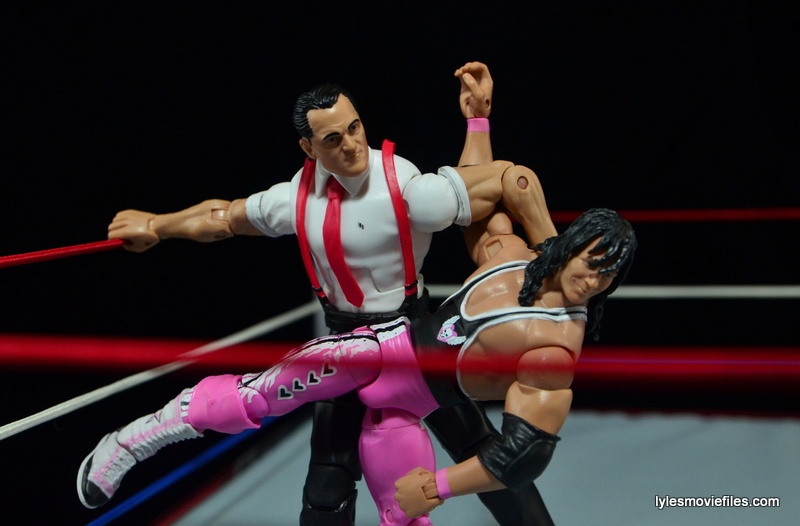 Accessories: IRS comes with his trusty briefcase. It seems a bit undersized though so I’ll be swapping it out with one of the larger briefcases from other figures. Finally all those Money in the Bank briefcases have a purpose. The briefcase fits better in the right hand despite the more obvious gripping left hand. It’s too wide and can’t grip the briefcase handle too long.

Additionally, IRS has his glasses. Those will be something you’ll want to pay close attention to them whenever you’re fiddling with the figure as they seem destined to get lost otherwise. 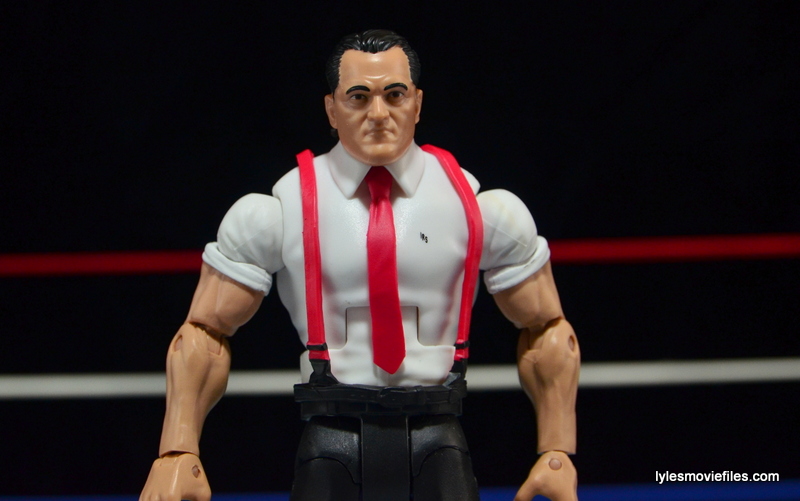 While they’re not traditional accessories since they’re not intended to be removed, I really liked the execution of the suspenders. They’re a separate piece so as not to break up the flow of the shirt sculpt or hinder articulation. They do pop up a bit when the lower portion rides up. I think a little superglue would fix that problem, but it was a clever workaround for something that could have been handled much worse.

Worth it? Compared to other Elites, IRS doesn’t have a lot of fancy bells and whistles that will make collectors feel like they got a great value. For old school collectors, IRS is a must whether as a solo star, one half as Money Inc. or a cornerstone of the Million Dollar Corporation. 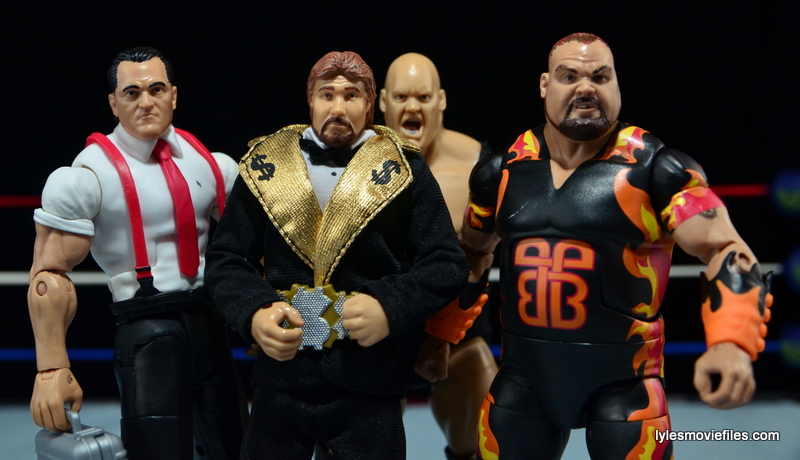 Anytime you’ve gotta make fixes to a figure it’s annoying and Mattel has the parts on hand to get IRS’s scale better. The less than useful left hand also warrants a quick swap out, but with those issues addressed, this is about a good an IRS figure as I’d need.

Where to get it? Toys R Us has been pretty good about getting in newer WWE figures. Walgreens also tends to have Elite 40 in stock while I’ve seen a few remnants of the wave at Wal-Mart. If you don’t want to deal with the hassle, you can grab him from Amazon. 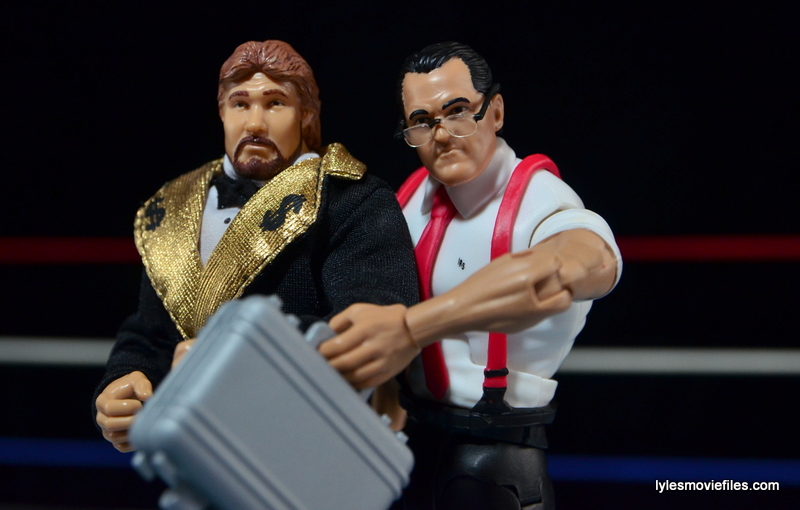