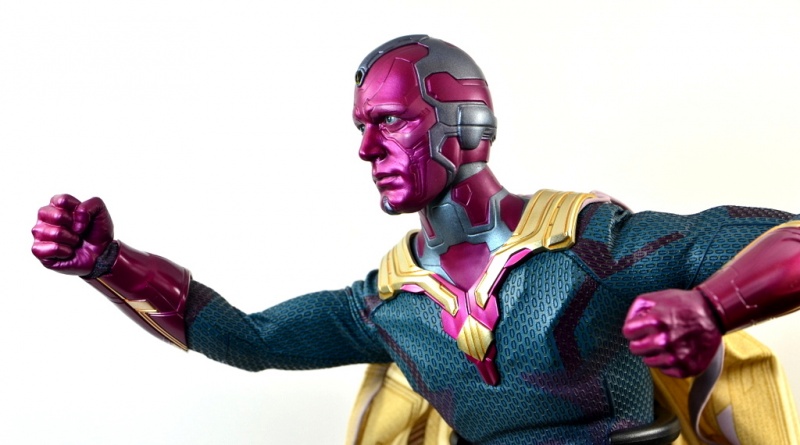 Call me crazy but I’m thinking Captain America: Civil War is going to prove mega popular with fans. It’s hard to go wrong with essentially the third Avengers film hitting theaters on Friday. My Hot Toys Vision arrived this week from Sideshow Collectibles and the timing couldn’t have been better as he arrived right after I attended a Civil War screening.

Vision is one of the few characters like Captain America that largely retained his Avengers: Age of Ultron look. That means the Hot Toys Vision figure works perfectly for a Civil War version.

While The Vision didn’t have a prominent role in Age of Ultron beyond the final fight, he does play a significant part in Captain America: Civil War that may make him more appealing to collectors who were on the fence about owning him. Like the movie, the figure didn’t disappoint.

Package: The Age of Ultron packaging isn’t the most exciting in the world. It’s a pretty simple portrait that wraps around ¾ of the box. Although it’s way too late in this particular line for Hot Toys to switch things up, I’d love to see more dynamic pictures of the figure like they’ve done with the Star Wars line. 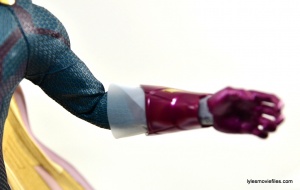 But let’s face it, you’re definitely not collecting Hot Toys to have them MOC so the packaging isn’t much of an issue.

Vision has the usual plastic guard for the head, but instead of the usual plastic taped around the wrists and shins, he has more of a tissue paper style wrap. If you’re lucky, it’ll pull right off with a little force, but you’re more likely just going to need to pop the hands and feet off to peel the wrap off. 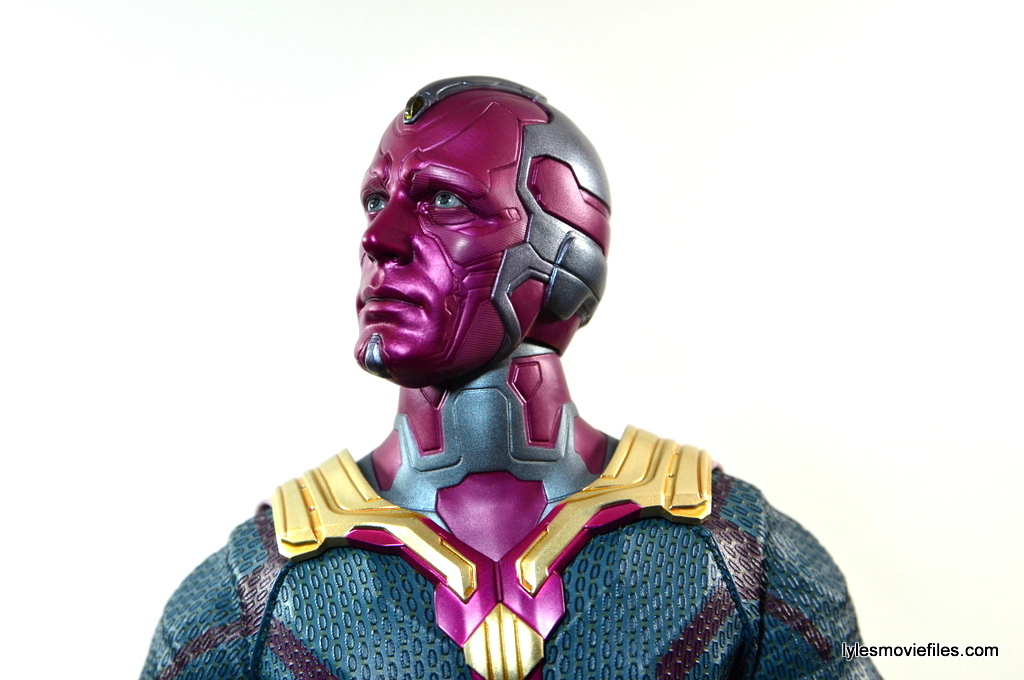 Likeness: Vision was one of those characters whose movie design was much more complicated than the comic book version. There’s a lot more panels and seemingly random pieces than the more streamlined source material. Oddly, while I’m not the biggest fan of the movie design, it translates well for the figure.

Paint: There isn’t a ton of paint on Vision since he’s wearing a costume. A lifelike human expression isn’t all that essential for an android, but Vision features the now expected stellar Hot Toys head sculpt treatment.  Ironically, the eyes have a warm, almost humanlike appearance to them. 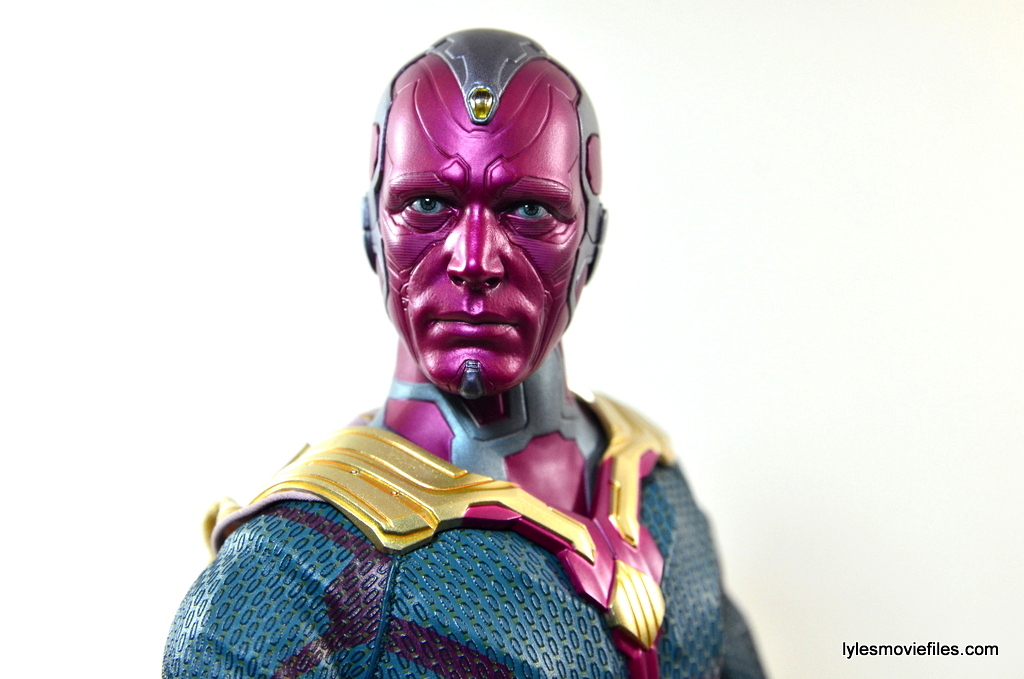 Outfit: It’s funny how it works better on the figure than on the big screen. The outfit has this really neat texture look. The raised details help make Vision stand out and I liked it much more than I imagined. The various colors are sharp without any bleeding over. You wouldn’t expect Hot Toys to slack off on that front and there’s no letdown here.

While it wasn’t portrayed as obvious in Age of Ultron, there’s definitely a Tony Stark influence on the Vision’s outfit, specifically with those Iron Man style gauntlets and shin guards/boots. There’s a really neat element that also translated well with the figure. 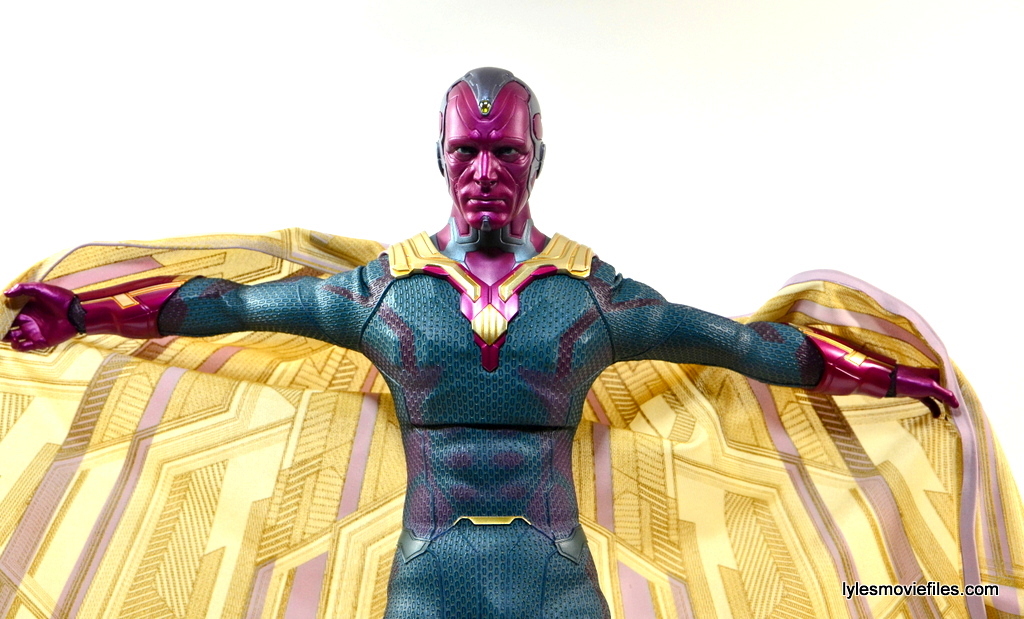 I’m really not a fan of the cape design. It’s way too busy and has more of a shower curtain pattern than a more basic superhero cape. No fault of Hot Toys as they’re just sticking to the source material.

Articulation: Despite the form fitting material used, it doesn’t inhibit the articulation at all. I was able to pose Vision in every conceivable pose – within reason. With the aid of the stand, Vision can be positioned in some pretty fun levitating poses as well.

The cape also has a wire along the edges of the cape to add another element of poseability. You’re not gonna get a ton of movement out of it, but it hits all the important parts. I still wish the movie version cape had that trademark Vision high collared cape, but that’s an issue for another time.

Accessories: Compared to some of the other recent Hot Toys releases, Vision is very sparse on this front. 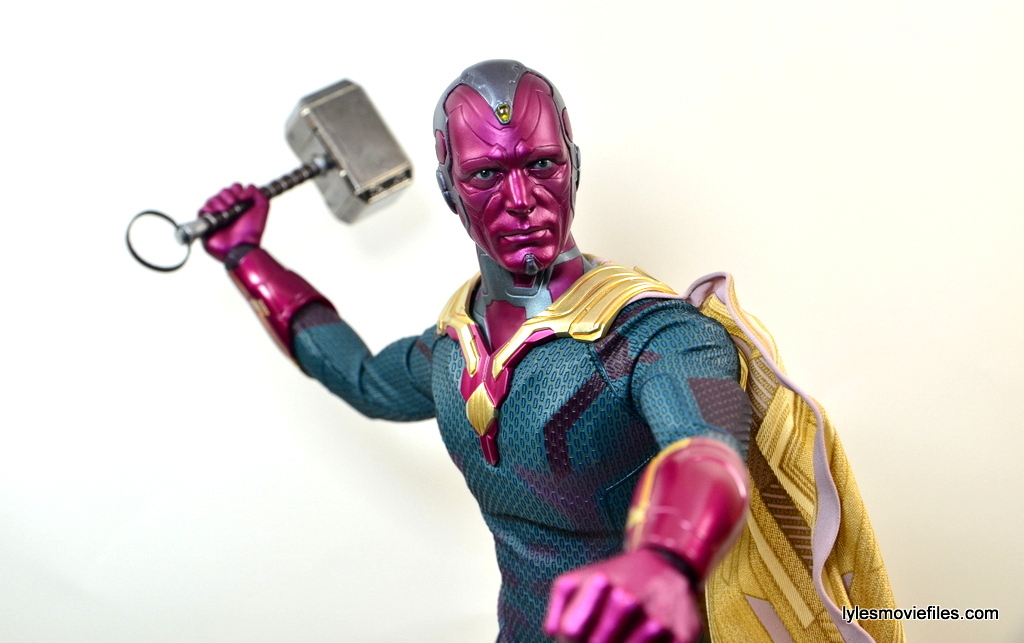 He comes with three extra sets of hands: outstretched fingers, gripping and fists; the standard display base, a flight stand with hook and Thor’s hammer. More of a cute addition to play off a couple of sequences from the film than an essential accessory, Mjolnir is the same hammer we’ve seen with previous Thor figures. It’s such an oddly specific accessory that I’d rather Vision have some Ultron drone parts instead.

[irp]Worth it? Compared to similarly priced $220 figures like Hawkeye and Black Widow and a Captain America figure that would run you only $5 more, Vision isn’t exactly a great deal. Considering the mind gem Infinity Stone embedded in his forehead, I was surprised Hot Toys didn’t try and beef up the value by making that a light-up feature, which would have been preferable to Thor’s hammer. Vision would be a better value if he were priced closer to the $209 Quicksilver. But can you really have an Avengers squad without Vision? 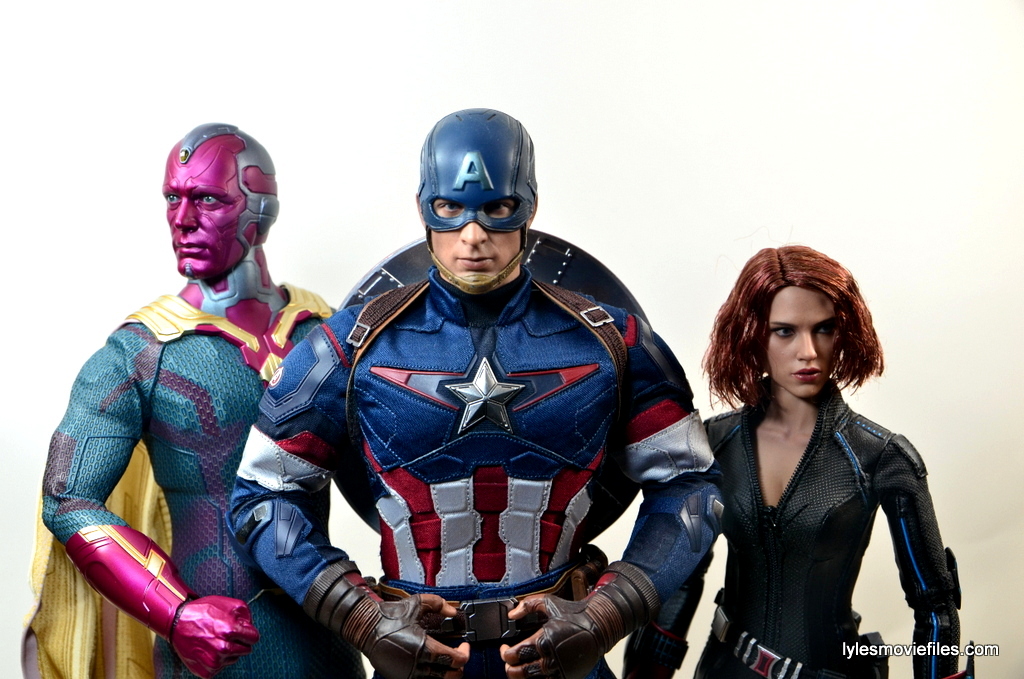 Where to get it? Sideshow Collectibles still has Hots Toys Vision in stock. I’d recommend grabbing him soon though as I’m convinced Civil War fever is going to put all of those characters in high demand very shortly. 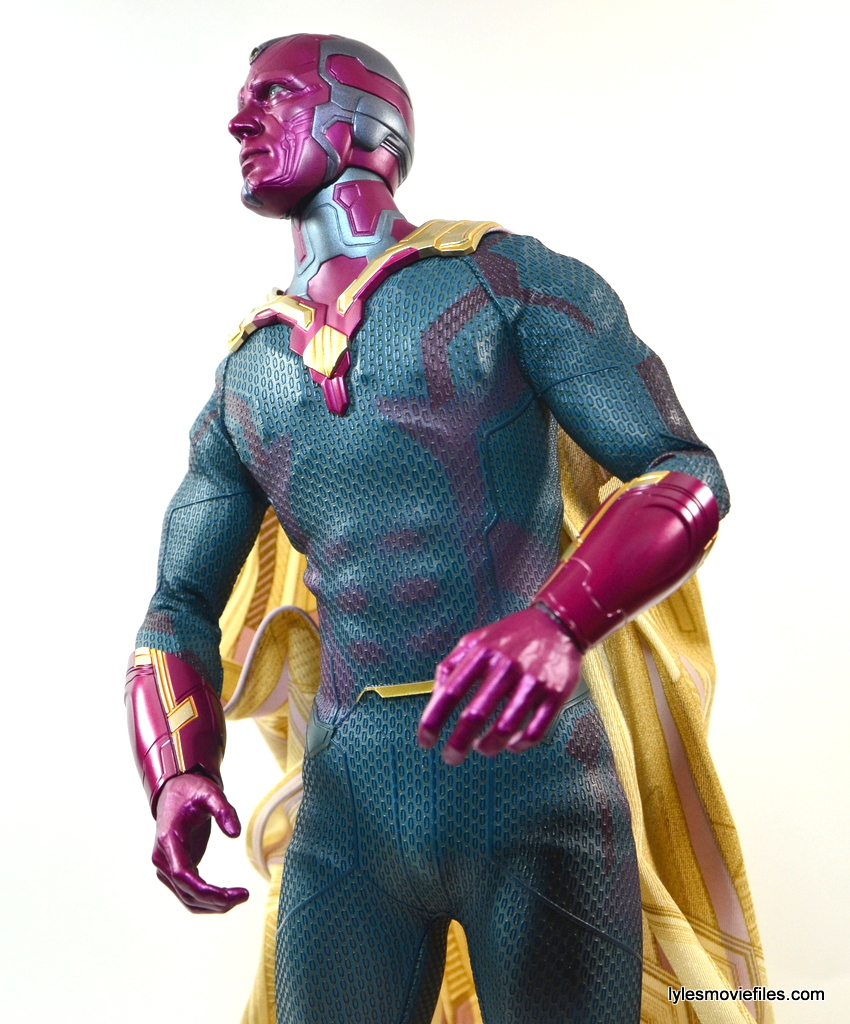