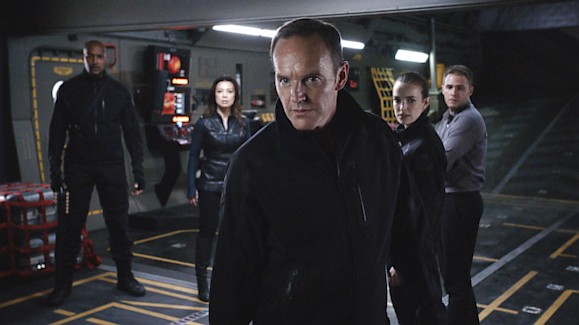 SHIELD wraps up its season finale in costly fashion to one team member.

It’s been true ever since Season 2, but if you had any doubts, the Inhumans are the MCU’s mutants. Ascension’s Jean Grey style sacrifice was arguably better executed than X2 even if the dead Shield member doesn’t come back with fiery near omnipotent telekinetic powers.

Picking up from the end of Absolution, Daisy and Hive had a big time slugfest. I loved the fight scene with Hive going all in with the Neo fighting style and Daisy using her powers in new and creative ways to make her a more formidable hand to hand combatant.

Fitz and Simmons pulled off one of the episode’s biggest shocks as they were confronted by Guiyera and Fitz killed him with an invisible gun. Guiyera was too cool for such an ignominious death and what metal master doesn’t keep a personal shield around him at all times? Doesn’t he pay attention to Magneto?

The writers had a lot of fun playing around with our knowledge that someone was dying tonight with numerous close calls for Yo-Yo, Mack, Lincoln and Coulson as he came face to face with Hive’s real face. Props to the effects team for that as Hive looked fittingly creepy and threatening instead of silly. While most of the team battled Hive’s Primitive Army, Daisy was all set to pilot the shuttle to burn Hive’s Inhuman bomb in orbit even though she knew it would mean her death. 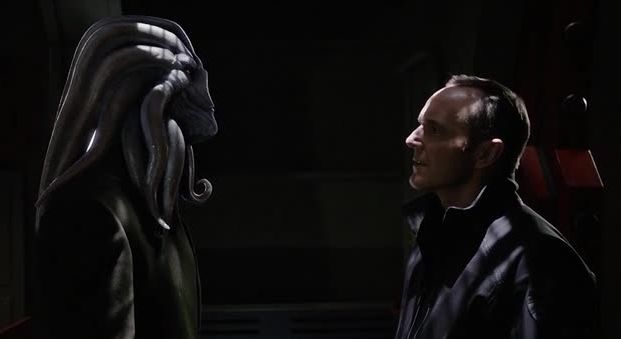 Your mortgage was safe if you bet Lincoln was the Shield agent who died in the finale although you could quibble that Lincoln really wasn’t part of the team, but no need to be picky. Lincoln knocked Daisy out long enough to take control of the shuttle although not before picking up a stowaway — Hive.

I really wished the show hadn’t hyped the death so long ago. In a weird way Lincoln dying to save the rest of the world from becoming mindless Inhuman Primitives felt anticlimactic. Of all the characters, Lincoln was the most expendable. He never really clicked with anyone and his retcon portrayal as a lovesick hothead seemed like a desperate attempt to make him meaningful so his death would have some impact.

The farewell scene played out exactly right. Since Lincoln’s connections to the team were so weak everyone kinda had this ‘aww man, that sucks’ attitude instead of some overblown bawl fest that hadn’t been earned. Chloe Bennet’s performance was exceptional here though as she was devastated Lincoln was dying in her place.

Although the Lincoln/Daisy relationship never clicked or felt as natural as say even Mack and Elena, this was a really nice moment. I was initially worried this scene was playing out long enough for Hive to come up with an escape, the simple sight of Lincoln and Hive watching Earth side by side was a unique visual and oddly fitting conclusion to both the men that Daisy/Skye loved.

We get a flash forward six months to headlines questioning if Quake is a hero or a villain before Daisy meets the wife and daughter of the precog Inhuman who foreshadowed her death.

Coulson and Mack are observing all of this and Coulson sics the SHIELD(?) troops on her. Daisy easily escapes using her powers Invisible Woman style to lift herself up and onto another rooftop before Coulson and Mack get close. Coulson says the director (Nick Fury? Maria Hill?) won’t be happy about that.

In my most immediate kneejerk reaction I’ve no interest in the show becoming The Fugitive: Quake Edition. There seemed to be so much more fertile ground to explore with Daisy adjusting to this latest tragedy, how she relates to her teammates — some of whom are still uneasy around her — and her issues with the Sokovia Accords. Making Daisy an outlaw with Coulson and Mack leading the charge to bring her in seems to be taking the show into a director similar to the Incredible Hulk the TV series with Daisy lending a hand and narrowly avoiding her pursuers. I can’t say it’s a direction that seems all that interesting especially since the old formula hadn’t grown old yet.

A much more interesting development occurred in the post-credits stinger however as Holden was in his lab. He’s been acquitted, which hopefully means he’ll be a series regular next season. Holden had some big news for Fitz and Simmons, but with them on vacation he kicked the party off for himself declaring today his computer AI Ava’s birthday as the first of his Life Model Decoys. For Shield fans that’s a pretty exciting Easter Eggs, however I’m confused since I always assumed Eric Koenig and his lookalikes, who were introduced in Season 1, were LMDs.

But if that is a possibility, let’s bring Trip back already.

Each season of SHIELD has gotten progressively better and this was a terrific season finale to have fans eagerly awaiting its return.

I’m looking forward to seeing what’s in store for Season 4 and if it will play out in a more traditional timeframe now that Agent Carter won’t be returning and the Most Wanted spinoff didn’t get approved. What are you hoping to see for Season 4?